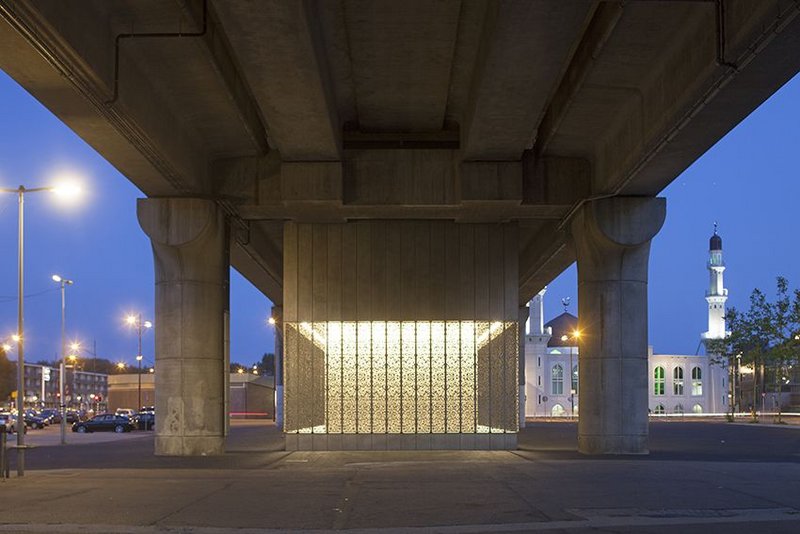 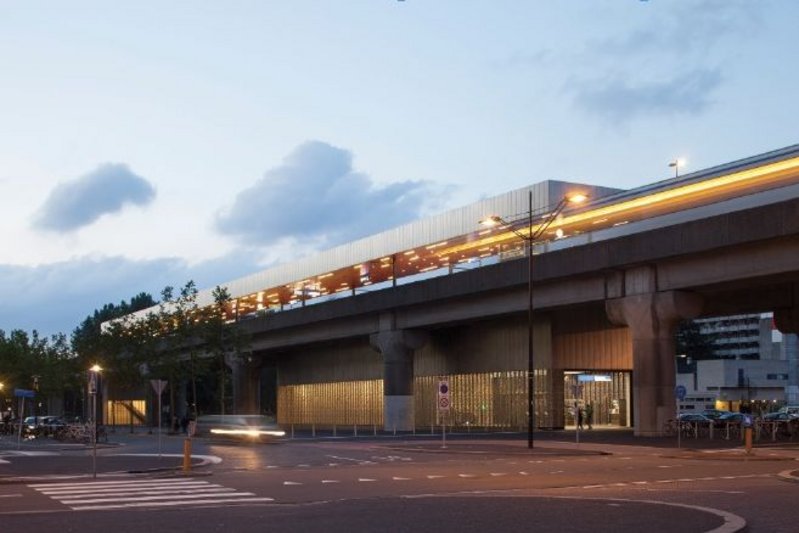 Amid the 1970s concrete brutalism of Amsterdam’s Bijlmermeer district, Metro­station Kraaiennest is a delicate surprise. An ornately patterned screen throws filigree shadows to create an ephemeral environment in contrast with the rough and tough neighbourhood surrounding the station.

Maccreanor Lavington won the competition to build the €14m project. Although the priority of the brief was improving the station itself, the architect saw the opportunity to provide a public landmark at the same time, working with Rotterdam lighting consultant Sjoerd van Beers to create a building that at night serves as a glowing lantern in the market square. 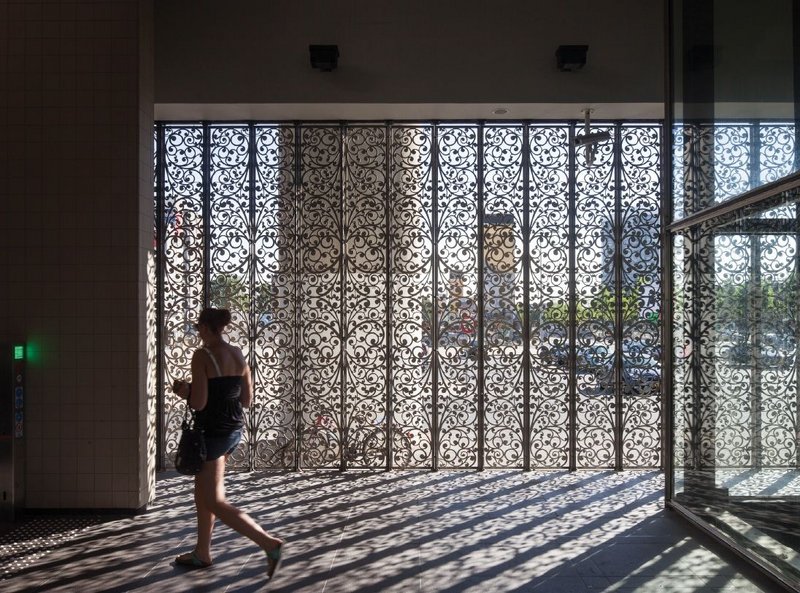 By day the lighting effects are reversed, with sunlight creating a delicate shadow pattern on the station’s floor. Credit: Luuk Kramer

The challenge was to create a less intimidating station environment as part of a redesign to provide disabled access to the elevated platforms which sit some 11m above ground level. To improve functionality, Maccreanor Lavington relocated the 550m2 entrance and plant room to front the main street and introduced escalators to the platforms in place of the spiral stairs. The station entrance presented a particular conundrum – while the architect wanted it to be more welcoming to passengers, it couldn’t be too attractive to rough sleepers, especially as the station was unmanned. Nor could it be susceptible to vandalism.

‘Making sure we designed the graffiti out of the project was primary,’ says director Gerard Maccreanor, adding that this was a major problem throughout the area.

‘The design had to be friendly, graffiti-proof but public, and attractive to use.’

‘The design had to be friendly, graffiti-proof but public, and attractive to use.’ – Gerard Maccreanor, Maccreanor Lavington 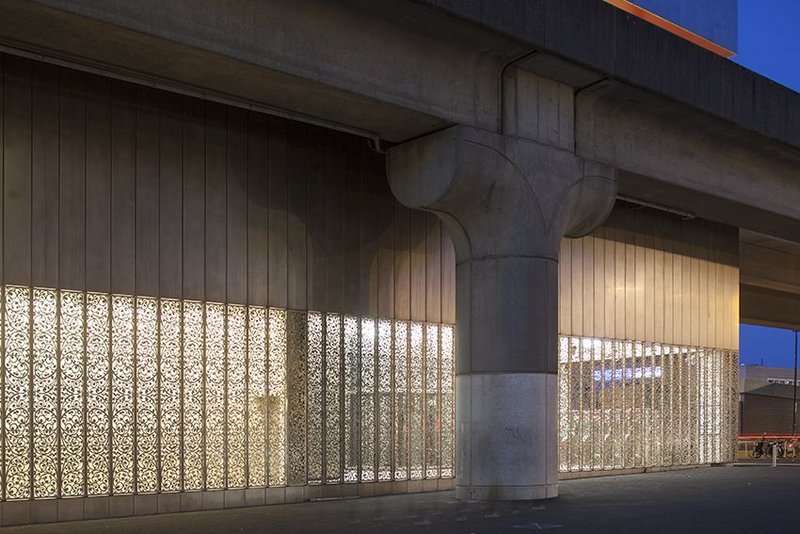 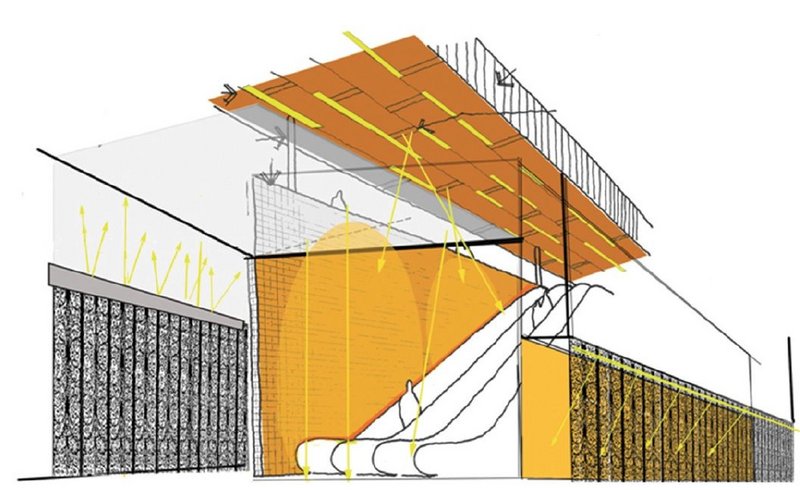 Sketch perspective of the Kraaiennest station, outlining the principles of its lighting strategy.

The solution of a patterned stainless steel screen addressed all these issues in one go by creating shadows with sunlight by day and artificial light by night to make an entrance animated by shadow.  Despite its attractiveness, the screen ensured that the station was unappealing to both rough sleepers and graffiti artists alike by removing both protection from the wind and an expansive canvas to work on at the same time. The entrance is also lined with ­ceramic wall and floor tiles.

While the lightness of the screen contrasts with the heaviness of the station structure, its pattern and the resulting shadows give it more visual weight than a lightweight canopy.

‘It softens the environment enormously. By daytime and night it’s a very warm, rich building,’ says Maccreanor. ‘Somehow it makes the surrounding area a public space.’

The screen forms the outer walls of the ­station at ground floor level and clads the nearby small escape stairs building – also ­situated beneath the elevated tracks – on all sides. Stainless steel panels flank the rest of the ­elevation at upper level, as well as the 1,015m2 canopy above the elevated tracks, creating a material unity between the two levels.

Within the station the first challenge for the lighting, according to Sjoerd van Beers of lighting consultant Beersnielsen Lichtontwerpers, was to convince the client to look not only at the technical light requirements, but also to take into account the qualities of the space and architecture – and to consider how these could be experienced during the evening and at night.

The solution was to use the space of the station entrance as a ‘lamp shade’, with the white stucco ceiling acting as a reflector for the indirect lighting (Bega 8558 ceramic discharge lamps) so that visitors can experience the full height of the 7.5m space.

On the other side of the station Beersnielsen Lichtontwerpers used Norka T8 fixtures to light the 4m high wall behind the stainless steel panels so it lights up like a lampion at night.

To avoid fixing lighting to the 11.8m high escalator walls leading up to the platforms, the designers used narrow beam ceramic discharge lamps with enough reach to illuminate the base of the escalators. On the platform, the aim was to highlight the red soffits of the canopy but avoid ending up with two parallel lines of lighting. Instead, Beersnielsen Lichtontwerpers used an irregular pattern of Norka T8 fixtures, intensifying the pattern around the escalators by using Selux’s M125 by 90 railway cassettes. 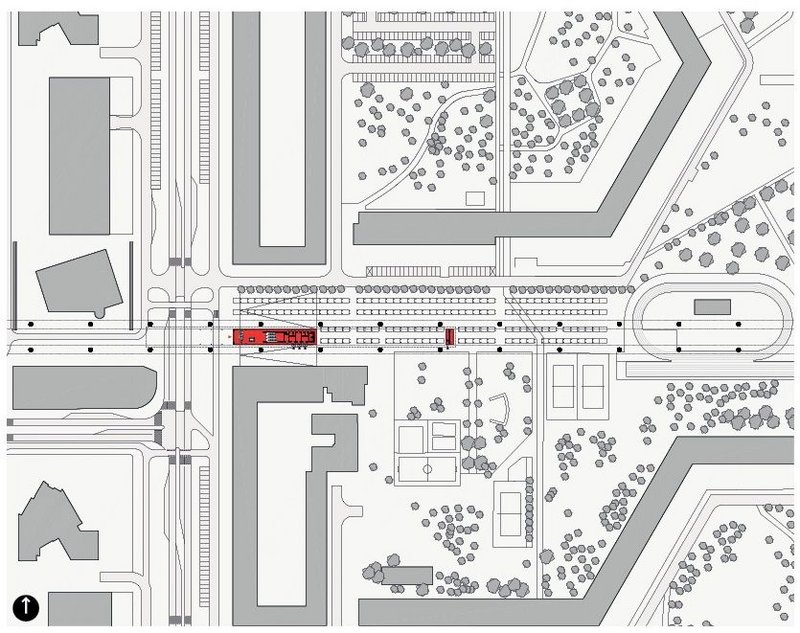 The metro improvement project follows a continuing regeneration programme to bring back a traditional street pattern in the area instead of the large-scale housing blocks of the 1970s, and reconnect the Bijlmermeer area to the rest of the city.

Maccreanor hopes the project will create more of a civic presence in the same way that Charles Holden’s stations did on the outer reaches of the London Underground. Used by more than 100,000 residents, it has proved popular locally and remained free from graffiti. •

The project has been shortlisted for an RIBA EU Award.

Maccreanor Lavington swiftly settled on the idea of a perforated screen after briefly considering using ceramic tiles. Stainless steel was the only viable material for the screen since it was both robust and easy to clean. When creating the pattern, the practice was careful to avoid cultural references since the community is very diverse.  Instead the end result – an adaptation of a pattern spotted on a chateau gate – is influenced by French baroque while resonating with the Islamic tradition for decorative screens.

Trials were conducted to ensure the filigree pattern would retain its structural rigidity. These included a test panel installed at the station with the sign ‘kick me’ inviting rough treatment. The design also had to be anti-climb and without scope for children to get their heads stuck.

The screen was laser cut by Strukton Bouw from 5mm thick stainless steel in panels measuring 4m by 515mm. These are fixed back to a stainless steel frame attached in turn to the floor and the main concrete structure. 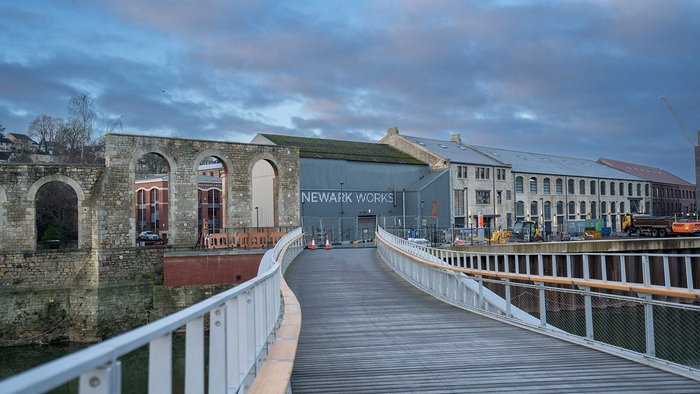