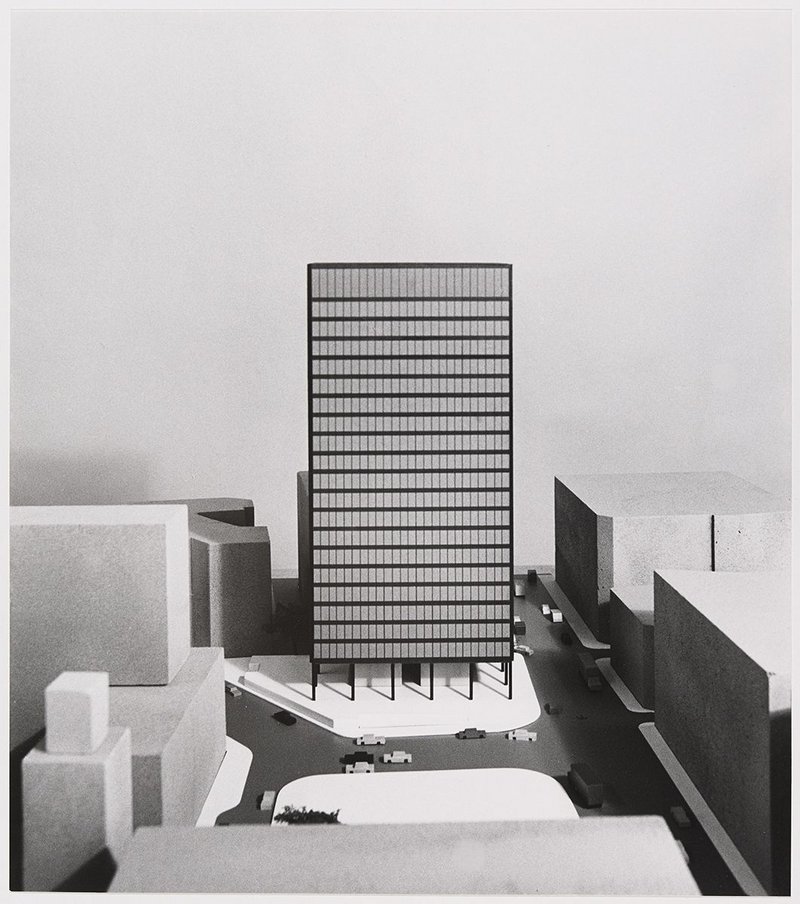 It’s the best of times for what might in normal times seem a rather arcane exhibition, opening next month: two office buildings (one unbuilt) on one site. But this is one of the most historic sites imaginable, involving two of the world’s great architects. For Mies van der Rohe it was Mansion House Square in the City of London, the tower and plaza in high modernist style that did not get built. For James Stirling, his successor, it was No. 1 Poultry, the triangular apex block in high post modern style on the same site which did – eventually – get built. And which has recently been declared a listed building to protect it from thoughtless alterations. There is a rich irony there, of course, given that it replaced a collection of pretty good Victorian listed buildings which found their ‘protected’ status offered them no protection in the end.

This is a long and convoluted saga to get over in one exhibition, even though there was only one client throughout: Peter, later Lord, Palumbo. In both cases he commissioned a design from a living architect and then attempted to get them built posthumously – successfully in the case of the one we see today. Palumbo knew that, if built, the Mies scheme was always likely to be posthumous – the architect was 76 at the time of the commission from young Palumbo in 1962 and everyone knew that assembling the entire site would take many years. Mies died in 1969. In Stirling’s case, of course, everyone was taken by surprise. Stirling died in 1992, as the result of a bungled operation, aged only 66. But happily for the future prospects of No. 1 Poultry, such a level of detailed design was required for the public inquiry that was held into it that relatively little design development was needed for the Stirling Wilford team – Laurence Bain being the key person – to translate into reality. It completed in 1996.

But why stage such an exhibition in the Architecture Gallery at the RIBA now? Because this is the first time that the two projects, having previously been seen chronologically, will be seen side by side. Architect speaks to architect in very different languages: Stirling was a supporter of the Mies scheme at its public inquiry, but produced an utterly different solution himself. Mies worked mainly through models as an auteur, and his study models are revealing. Stirling preferred to develop ideas through drawings, helped by a surprising level of collegiate input from his office, with endless options bound into ‘ledgers’ on display here. We see plenty of this from both men plus photos of the time, some fascinating letters between everyone, press coverage and telling objects – such as a Travertine ashtray Mies designed for the building which allegedly fits its overall module.

RIBA curators Marie Bak Mortensen and Vicky Wilson have pulled together material from private and public collections including the RIBA’s own and of course, Palumbo’s – but also from other sources including the archive of Lord Holford, who was the executive architect for Mies in the UK. Palumbo insisted on a remarkable level of quality and detail in his models, and the large cityscape model of Mansion House Square has been fully reassembled for the first time in over 30 years.

This exhibition gives the opportunity to study the radical stylistic shift that was happening in architecture at the time – broadly from modernist to historicist, though No. 1 Poultry – always more of a big fat hen than the ‘1930s wireless set’ of Prince Charles’ jibe – turned out to be a complete original. There were also the changes in the planning climate that led from the one to the other. One of the first actions of Peter Rees on taking up office as chief planner for the City of London Corporation was to assess the previously rejected Mies scheme as he prepared for the Stirling Wilford replacement. He noted an obvious problem: here was a rectangular plaza proposed on a triangular site, on one of the City’s historic radiating road intersections. Had that been the best idea in the circumstances?

Of course Mies had found a way, aligning the facade of his 19-storey tower with the flank of Mansion House to the east, demolishing an inconvenient triangular building next to it in addition to the Mappin and Webb triangle, and putting a dogleg in the road. Set well back from the previous apex of the site, the tower’s height compensated for the loss of buildings at ground level, as did the proposed underground shopping centre beneath the plaza. But the road still ran across the square, most of which was to be attached to the Mansion House – hence the name – rather than the tower which would have had a relatively small pedestrian apron in front of it. This alignment of the tower also meant that it did not directly address this important intersection, instead being angled slightly away from it.

What if it had been built, and had suffered the usual ravages of time? Well, that was imagined for us in the March 2013 RIBA Journal by artist Matthew Butcher and Postworks with Adam Shapland. It rings very true – the image of a somewhat altered and run-down – though still magnificent – tower and environment was very adroitly done. You would think it had been built. Read their account at here.

After the Mies scheme was finally rejected, Stirling’s No. 1 Poultry went its own merry way. It would fill its triangular site (and more, requiring the loss of a historic alley) and would proudly march up to the apex of the junction just as the existing Mappin and Webb building with is turret and clock did. In fact, No. 1 Poultry is pretty much a reimagining of a typical segment of low-rise Victorian City of London. Crossed with Ancient Egypt, of course, this being the mood that Stirling was in at the time. The drawings show exhaustive studies for the facades, including even a gothicky one.

There are various important letters including one from Philip Johnson objecting to the proposal by his former best buddy Mies – not as good as the Seagram, appears to be the drift. And a telling one from Stirling offering to return his 1980 Royal Gold Medal on the grounds that the Queen's heir had been so insulting about his building. The handwritten rejection was never sent and Stirling kept his Royal Gold Medal, but insisted his letter be filed in the archives.

This is the first exhibition to be designed by the architect of the Architecture Gallery itself, Carmody Groarke. It is a calm, simple layout, divided as you would expect into two main areas. Mies is placed on a teak plinth, Stirling on cherrywood. But this is more than a study of two design responses. It captures a moment when a battle was being fought for the very soul of architecture.