Ballymena’s new health centre by Keppie and Hoskins is an attractive building. If only it had taken the opportunity to restore the site’s Victorian coherence 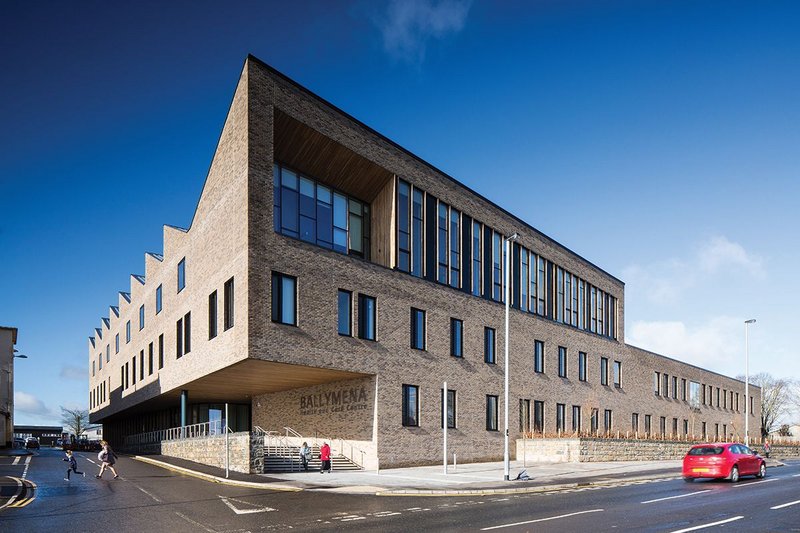 View of street corner entrance along Cushendall Road. Staff break-out and meeting rooms look out through the expanses of glazing on the second floor. Credit: Donal McCann/David Cadzow

A walk around Braid Valley Hospital in Ballymena, Northern Ireland, goes a long way to explaining the new Health and Care Centre that now shares its site. With the exception of the Victorian main building, a workhouse for 900 inmates built in 1843  by George Wilkinson, it is a muddle of low-rise buildings infilled by ‘temporary’ structures that look as though they’ve been there a long time.  Local stone sits alongside red and brown brick, white and grey rendering, concrete, pebbledash and timber. These buildings house facilities varying from a former fever hospital, GP surgeries and outpatient x-ray clinic to a water tower, industrial chimney stack and even an old pauper burial ground – all stitched together by tarmac car parking stuffed in every possible pocket.

It’s little surprise then that any client or architect planning a new building for the Northern Health and Social Care Trust would react sharply to these conditions in favour of something big, bold and rational.

In one great sweep, the new Health and Care Centre gathers together six GP practices, a GP treatment area, community and general dental services, children’s services, mental health and acute care outpatient and ­community clinics, as well as physiotherapy, occupational therapy, podiatry, imaging services and offices that were all previously spread across the site. In such a context, you can understand why the building is an 8800m2, 2.5 storey land-scraping monolith. 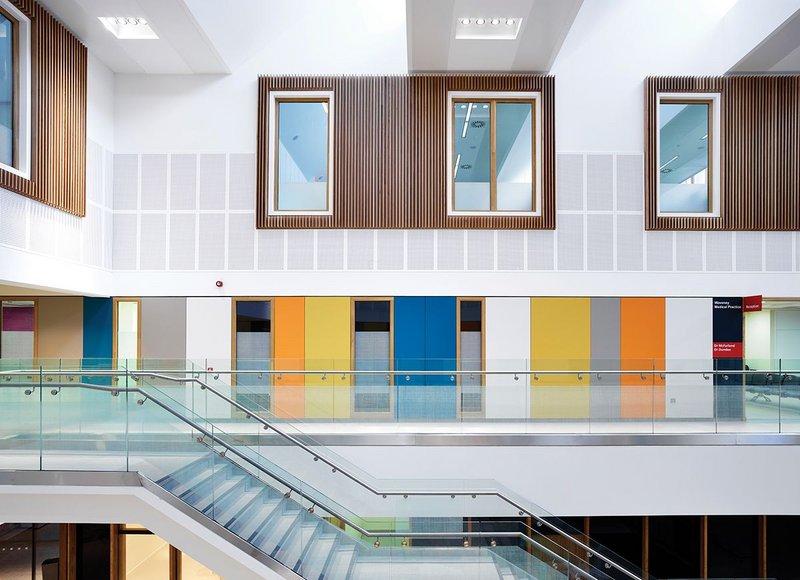 View from GP surgery walkway across the atrium. Light enters the space through glazing in the sawtooth roof. Credit: Donal McCann/David Cadzow

Nevertheless, Ballymena Health and Care Centre, which sits a mile north of the town centre along Cushendall Road, is a smart and attractive building. Sure, it suffers slightly from aesthetic untimeliness, having been commissioned (in 2008) so long before it was completed, but it has been properly planned and thought through. There are two entrances to the atrium reception area, one acknowledging that most people will arrive from the car parking at the rear, the other, on the street corner, offering the hope that some will arrive on foot or by bike. There is an integrated pharmacy and café, and the individual GP reception areas on the first floor are all visible from the building’s front desk below. Services with heavy machinery are on the ground floor. A landscaped courtyard draws light into the deep plan and serves as an outdoor training space for new wheelchair users. Nifty louvres mean windows can be opened. And the ceiling-high glazing in the waiting and staff rooms give wonderful views, including one of Slemish Mountain, a local landmark that is the plug of an extinct volcano.

You can imagine that long-time patients of the hospital and health centre are delighted with the new quarters. The building, designed by a collaboration between Glaswegian practices Keppie Design and Hoskins Architects, is light, airy and – perhaps mostly importantly after years of visible underfunding to the hospital’s built environment – new and permanent. It is also full of features. With its sawtooth roof that resembles Caruso St John’s recent Newport Street Gallery for Damien Hirst in south London, you can see why the building sailed through planning. Even the colour of the brick is similar.

Inside, both entrances open into a three-storey atrium, from which visitors can be directed to departments on the ground or first floors. A long stairway sears through the space and open cantilevered walkways at first floor level indicate publicly accessible spaces. Each level is given its own character to help identification: surgeries have different coloured panels while the staff offices above are more sealed, enclosed beneath the rafters and framed by timber uprights.

On one corner of the atrium a wide double-height corridor runs along two sides of the courtyard at first floor level, giving access to departments at the rear. Its full glazing to the courtyard creates pleasant, naturally lit waiting areas. In contrast, the western side of the building is more cut off, both for children’s services on the ground floor and outpatients above. Along these three other sides of the courtyard, doors lead off into different clinical departments. These are, slightly strangely and perhaps unnecessarily, in turn supported by another internal corridor which loops around the plan for access to consultation rooms. In places this organisation is rather odd, with the internal corridor looking back-of-house in plan without actually being so, and some outpatients having to walk all the way around the building to reach the right waiting room because of the atrium being only open on one corner and the courtyard set-up.

There are, of course, advantages, mainly that most consultation rooms have daylight, operable windows and external views.

The third floor, appropriate to its purpose, is quite different from the rest. Given over to staff accommodation and occupying only the south end of the total volume, it contains break-out spaces, meeting rooms, a kitchen and plant under a sawtooth roof, open to the rafters. Here the floorplates are surprisingly traditional, with more private offices than is common these days, as well as open plan space. There are 181 workstations, designed to fit 256 employees at different times, with many operating 1:3 desk ratios – in essence ‘controlled hot-desking’ explains Sarah Mooney, project architect at Hoskins. It is pleasant though perhaps without much slack for manoeuvre.

By now though, you detect my critical reservations. This is irritating because Ballymena Health and Care Centre is a good building. Its renders looked great, and it achieves many good things for the hospital and community care. But after visiting it with its architect, a dig down into the history of the site produces a historical bird’s eye view photograph that cracks open the project’s flaws.

First, the brick is the wrong colour, throwing a speckled yellow that has no visual or geological connection with the local area into the already confused palette of building colours. The obscurity of the yellow is softened marginally by a low perimeter wall in the same brown basalt as the Victorian workhouse, but even so the Health and Care Centre feels like the first yellow brick building between there and Belfast, maybe in the whole of Northern Ireland.  It would look more at home in London; here, grey or darker brown might have been more appropriate.

Yet the colour issue, which is more obvious than it appears in these photographs from the architects, is not the only problem. Above is a historical image which, though uncredited and undated, must at the very least predate its 1993 publication on the cover of The Early Years of the Ballymena Workhouse 1840-45. It shows the problems that can be created when over-zealous clients, planners and designers apply a modernising hand to correct previous architectural sins, no doubt committed with the same good intentions.

The image shows Braid Valley Hospital with its gateway building intact, a collegiate layout that presented itself grandly but also gently to the street with stepped back buildings, areas laid to lawn, avenues of trees, symmetry and even a tennis court. Some of it is Victorian, some later and it is densely occupied, despite being also only a maximum of two storeys tall. The workhouse closed in 1947, yet since this image was taken the site has been rendered inelegant and complicated by demolition and temporary infill solutions. The overall masterplan has lost its original, indisputable charm. Even the main building did not escape the scalpel of 1960s architectural ‘modernisation’.

So it is disappointing that by reacting so sharply to its surroundings, the new Health and Care Centre doesn’t help the site heal its open sores. Rather, its effect is only to plunge other areas into further abandonment and possible future dilapidation. The image shows we have forgotten the art of lightness of touch in architecture; thinking only that big means better. We don’t take seriously the fact that spaces intertwined with open vistas and green landscapes contribute to wellbeing. Ballymena’s new Health and Care Centre is shown by the view to be needlessly large and bulky.

What’s particularly frustrating is that this is not a facility for large hospital wards and space-sucking machinery. It comprises mostly small consultation, interview and treatment rooms measuring less than 5m by 3m – around 140 of them, the kind which could be planned, for example, within the narrow wings of the former workhouse. The courtyard in a way seeks to overcome this depth of plan, but none of that effort can be perceived from the outside. What you are left with is a nice, interesting, elegant in itself, but nonetheless hulk of a building abutting its neighbours and the street in an unforgiving manner, allowing for more demolition behind. That doesn’t appease the modest residential buildings around it. The sceptic might say a land sale is coming up.