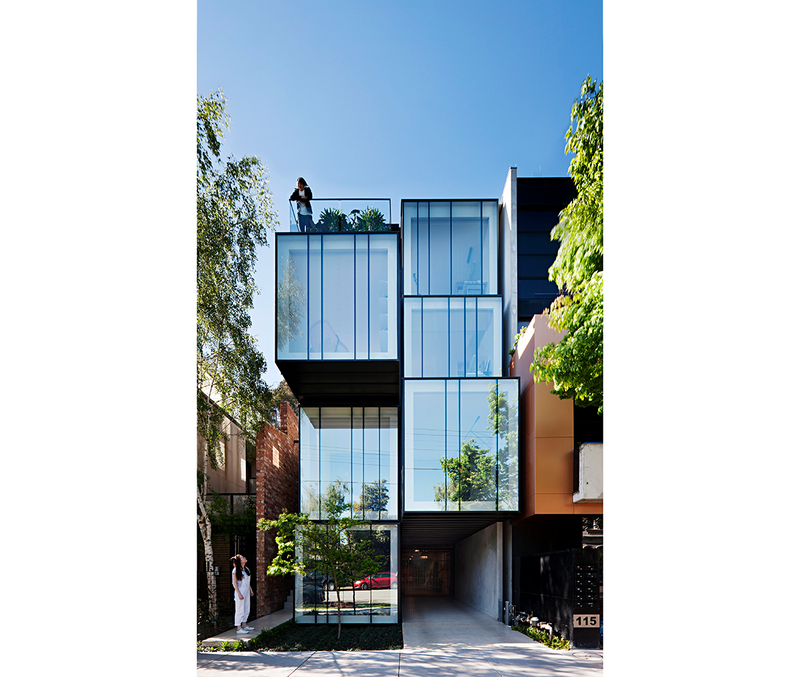 On the residential district side of the street the facade has the effect of modules popping in and out. Credit: Shannon McGrath

Walking down Wellington Street in the inner-Melbourne suburb of St Kilda, the striking, modulated facade of No 111 does not immediately present as a family home. Sitting easily among a collection of smallish commercial buildings, it appears as a rather more polished and skilfully designed counterpart – a showroom and office perhaps?

Speeding along the Princes Highway on its other side, the building’s sleek northern face aligns neatly within the slightly ramshackle built edge, set behind a small park with tall eucalypts.

Mixed Use House finds its conceptual impetus in this context. Wellington Street is a leafy thoroughfare running parallel to the seven-lane arterial route, and forms the edge of an increasingly affluent residential area to the south. The streetscape reflects this interstitial aspect. Mid-rise commercial and apartment buildings lie on the north side; individual houses and established gardens sit on the south. This reiterates the zoning regulations; business on one side, residential on the other. Mixed Use House plays in the space between, jumping across the street into the commercial. The result is an inventive domestic project that explores an urban housing model with broader applicability.

The site had been on the market for some time before the current owners saw opportunity where others had found problems. Sandwiched between buildings, highway and street, the long narrow block was in a great location – close to St Kilda, the city, schools and universities. As a builder/developer and interior designer, the couple did not have conventional expectations about what their house should look like. They knew they’d need to be clever to construct a house in the business zone, knew who they wanted to design it and were ready to work collaboratively to realise it.

The commercial zoning necessitated a mixed programme, but Matt Gibson Architecture + Design saw potential too. Mixed use became a way to think through the project and its possibilities, not just a means to navigate planning regulations. It wanted to explore the conjunction of domestic and commercial architectural modes and languages, bearing in mind the growing challenge of providing housing for families in Australia’s inner cities, where tiny apartments proliferate.

While both client and architect adopted an open minded and flexible approach, Mixed Use House does not represent a radical rethink of domestic life. The family structure it accommodates is a modest expansion on the nuclear model – one that is increasingly prevalent in Australia, as children remain at home into their adult years. In this case, the brief was to accommodate seven to nine people; parents, a young child and two adult children along with partners.

The elongated, contained site suggested a vertical compound. The clients expressed a clear desire to be connected as a family, yet have their own space. They were interested in a house that felt more like a hotel. They preferred crisp, clean interiors. Practically, there was a need to draw light into the deep plan.

The architect organised the house through five horizontal layers, punctuated by a glazed atrium through the three middle levels. At ground, the ‘commercial’ layer comprises parking and two small tenancy spaces. Entry to the house is at the first floor ‘communal’ level, straight into the atrium, with a 6m long bench and capacious kitchen to one side and a striking stair to the other. This opens into a living area overlooking the highway. The next two levels are designated ‘private’, with substantial bedroom areas, two per level, separated and connected via the atrium. Capping it all is the ‘retreat’ – bar, lounge and roof deck, removed from the rest of the house, spatially and aesthetically.
Each ‘bedroom’ includes a private living space and individual bathroom. They have similar floor areas but are planned differently. The parent’s bedroom has a large, luxurious bathroom. Those for the adult children have larger private living spaces. Cooking and eating is communal, but family members can live with varying degrees of independence, connected to the happenings of the house through the atrium. Other vertical connections are treated as architectural opportunities – the atrium stair becomes a sculptural element; a second stair ascends the full height of the top three floors in a single run.

The desire for a hotel-like atmosphere brings particular requirements in a house replete with family possessions and daily routines. The stuff, mess and labour of domesticity is invisible in a hotel. The everyday workings of the kitchen, toaster, kettle and so on, are concealed in the ‘scullery’ – increasingly common in new Australian houses. It sits adjacent to the main kitchen, and beyond the ‘public’ space of the atrium, hidden behind folding doors. There is plenty of storage throughout the house, but inhabitants probably need to be quite disciplined about it. The planning has also led to some curious conjunctions. On the first floor street edge, a home office shares space and views with the laundry. Though potentially awkward, it suggests an intriguing conflation of work life, domestic labour and the street.

As an infill building, its form and massing were developed by identifying the maximum envelope and then cutting away a front setback and a side entry lane, inserting the atrium and small lightwell, and segmenting the front of the house into eight long parallel volumes, two per floor. These were pushed in and out to create an articulated, animated elevation to the residential street. From inside, they modulate the spaces at the edge. From the street, the effect is of pods popping in and out, each framing a discrete function, providing a varied sense of occupancy and a captivating street presence.

The building’s northern face is flush, with each level glazed as a single plane across the width of the house. The freeway provides a colourful, ever-changing view, and a mostly gentle background hum. Tall eucalypts occupy the foreground, with the city in the distance. The presence and effect of these three aspects changes as one moves up the building. At the communal level, elegant tree trunks frame the zooming traffic. In the bedrooms, the tree canopy creates more intimacy, rendering the freeway more distant. The roof terrace affords long views over the city, with the freeway and trees far below.

This is a generous and accomplished house for a family with the insight and imagination, practical and professional skills and budget to realise it. When I visited, there were only two people in occupation – a parent and adult child with cats. The ground areas designated for commercial use were being used as family storage. It was easy to envisage different people, individually and in groups, at home in different parts of the house. The multigenerational family this house was been designed for is nuclear, albeit older, but little stretch is needed to imagine three or more generations in the house, or a group of people related in other ways. There is also clear potential to activate the commercial tenancy spaces as part of such an arrangement.

This flexibility, and the capacity to adapt to household configurations, is the potential of this house. The vertical compound idea might be explored in other projects and scenarios. The question is, how might these ideas play out in less affluent circumstances?

Justine Clark is an architectural editor, writer and researcher, director and co-founder of Parlour, based in Melbourne, Australia