Our regional towns need more intelligent, properly contextual buildings like this. Matlock in Derbyshire is in the Derwent Valley, is the terminus of the railway that runs up the valley, and is a handsome and in places vertiginous former spa and industrial centre that once boasted a cable-hauled tram service like San Francisco. It is also the home town of a frequent architecture award-winning practice,  Evans Vettori. This £1.8m mixed-use project of the firm’s, for a local developer who owns the adjacent turreted and dormered Victorian hotel building, is down a short side turning off the busy main road through town. It leads towards the river and the Edwardian Hall Leys Park.

You catch just a glimpse of Parkside from the main street, but it comes properly into its own when seen from the park, hence the name. Built on what was previously the surface car park for the hotel (a building itself now being converted to other uses), Parkside is a subtly-articulated four-storey block of 10 apartments – eight in the main stone-clad body of the building, plus two copper-clad penthouses with roof terraces. The ground level is given over to four commercial units, with two of them occupied by a flourishing café-restaurant.

The steel-framed structure is clad in fully self-supporting Derbyshire gritstone, generally 100mm thick with weighty solid lintels, which was extracted, cut and dressed at Birchover Quarry, five miles down the road. This ready availability of good local stone, says project director Dan Greenway, meant that it was cheaper to use in this more traditional manner than it would have been to design and make a stainless steel rail system for thinner stone cladding. Speed of construction dictated the underlying steel frame rather than wholly loadbearing masonry. The benefit of this way of using stone is immediately obvious when you visit: it looks and feels built to last.

It’s from the same quarry originally used for the adjacent Victorian hotel.  Much of the stone expressing the framework is given a vertically-reeded texture achieved by grit-blasting the surface through a specially-designed stainless-steel template, 8mm thick with laser-cut slots. Blind panels of stonework are left smooth for contrast.  The massive appearance is the key here, with the large window and door openings set very deep.

There are two types of balcony – projecting and recessed – to the apartments, both of useful size. The recessed version in the apartment I saw was large enough to count as a semi-outdoor room.  Indeed, dimensions are generous throughout compared to those of city centre apartments. Common areas, and the staircase rising through the building, are unremarkable developer-standard but perfectly acceptable. The penthouse level is externally clad in copper, allowed to dull naturally to what is remarkably close to the tiled-roof colour of its neighbour.  The rear facade with apartments entrance and car parking is straight, while the front elevation and the blind end are slightly kinked. A large bite is taken out of the principal corner of the plan to form a generous approach to the commercial ground level.

Although the rear elevation has to accommodate some covered car parking, the danger of it looking like a service yard is lessened by the side-angled copper cowls to four of the windows on this elevation, designed to avoid overlooking from and to the enormous sash windows of the old hotel behind. Greenway notes that these copper pods are like rotated versions of many bay windows to be found in the area.

With a public car park still wrapping round the river side of the block, there is little by way of landscaping – but by raising the apartments above the tall commercial ground floor, your view is not of cars, but of trees on the riverbank and the park beyond.

This, then, is a backstreet building on an important pedestrian route from one part of town to the next, and it plays its part with aplomb: clearly modern, well-proportioned and above all civic in feel, sitting comfortably in its surroundings.  It’s proof – not that you needed it – that regional architects and clients working together are fully capable of producing exceptional work.

And did all this attention to quality pay off commercially?  I see that all the apartments are sold now at a price range from £172,500 to £320,000 (for a penthouse), while all but one of the commercial units are already let. England’s market towns are too often beset with poor-quality new developer housing. It would be great to think that this modestly ambitious building will encourage many more clients and planners to raise their sights, and everyone’s expectations of what can be achieved. 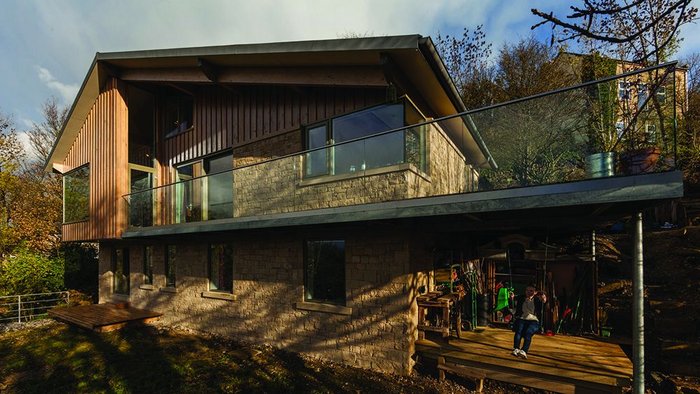 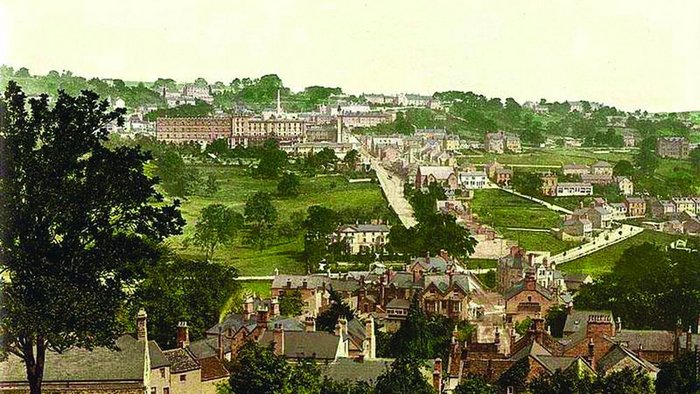 Pooley Bridge swaps a stone crossing for a bowstring arch

How Studio Polpo treats architecture as a community service