Stanton Williams made a great start with Nantes’ Musée des Beaux-Arts, but once you get past the foyer the refurbishment lacks clarity or courage 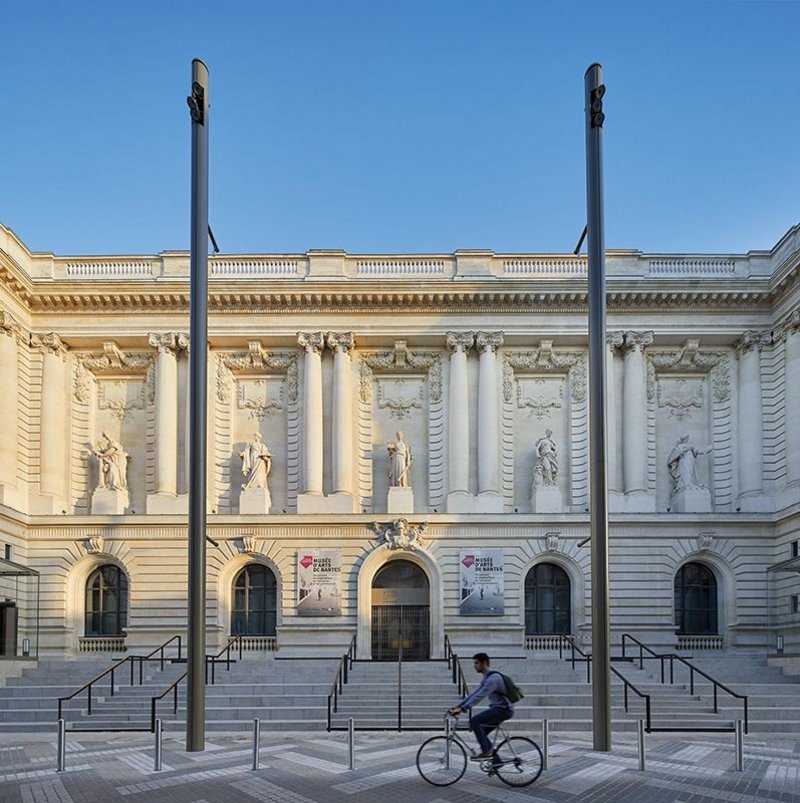 Stanton Williams has transformed the main entrance of the Nantes Musée des Beaux-Arts with new steps, seating and two glass pavilions, one for a lift, the other for displaying artwork. Credit: Hufton & Crow

Arriving in Nantes from the airport by car along the Boulevard de Vendée is an underwhelming experience. It’s a main route of more or less straight 6km road that crosses the Île de Nantes, passing a few interesting contemporary office buildings and many less interesting 1960s residential blocks. The road eventually leads to the city’s medieval castle where the dukes of Brittany lived from the 13th to 16th centuries, when Nantes was the regional capital. The Musée des Beaux-Arts is tucked away in a narrow side street on the other side of the road.

On first appearances it seems that’s your lot – a slightly impotent castle that has lost much of its commanding stature by being cut off from the river and substantially encircled by modern highways; a semi civic and cultural district around the botanical gardens; and a monstrous new development area. But of course it’s not – though I did have to spend 24 hours in the city to realise it.

Beyond the castle, and the pleasant quarter-circle ring of cobbled streets, medieval houses and the un-thriving Cours St-Pierre park at its end, there’s a vast centre-ville of 18th and 19th century white stone buildings that unravel along a rolling topography of Haussmann-esque avenues, boulevards and streets offering a perfect combination of grandness and intimacy. There are open piazzas and kilometres-long malls and vistas. The area is packed with boutiques, restaurants and people, and is made incredibly civilised by being mostly pedestrianised.

Model showing the complex arrangement of buildings on the block making up the museum. Credit: Hufton & Crow

Of course few cities are designed around driving in from the airport. But that experience of Nantes can be seen as a macro version for Stanton Williams’ seven-year refurbishment of the city’s Musée des Beaux-Arts, a fine typical Beaux-Arts stone building designed by Clément-Marie Josso in 1893. Urbanistically it too gives the impression that what you see is what you get. It too is made slightly impotent by the streets around it, but in this case because they are too narrow and always have been. But once inside you get less than you expect.

Stanton Williams won the job in 2009. What the architect found was a rather shut up, introverted museum that was struggling to display the breadth of its 8,000 piece collection – everything from the old masters to contemporary work. The architect’s task was to open up the museum and add new gallery space and facilities, including teaching spaces, an auditorium, a restaurant and storage, deserving of the fifth largest museum in France and a Musée de France holding part of the national collection for the Louvre. It was here that Anish Kapoor’s famous Svayambh red wax and paint installation was shown in 2007 (it went on to the Royal Academy in 2009), and where the most iconic photographs of the project moving through grand ornamental arches were taken.

Stanton Williams has not listened to the building, but rather tried to trick it into being a different museum from the one it is

Located at the end of a city block and trapped by the small roads, the museum had acquired over the years several pieces of neighbouring property; a former 17th century chapel, a low-rise townhouse and a car repair garage. In addition to making way for new facilities, the most complex aspect of the brief was to bring together these components into a coherent experience around a block of flats and its enormous walled garden – which would remain private.

To do so, Stanton Williams, led by director Patrick Richard, took the most obvious moves. Beneath the square footprint of the original museum, former garage and townhouse, it excavated a 6m-deep basement. This increased space, positioned the visitor cloakrooms, WCs, store and education rooms, and created a circulation floor that spanned and connected the site. Then the architect set about filling in the acquired buildings with new ones – the ‘cube’, a 4000m2, four storey gallery for the museum’s contemporary art collection to the north-west of the original building, a new four storey administration and archive terraced building along Rue Georges Clemenceau to the west of the main entrance, and a pavilion behind the chapel, designed by conservation architect Pierluigi Pericolo.

The original museum building is also connected to the cube by a first floor bridge. This link opens off one of the existing museum’s largest galleries, continuing over a gated service road that divides the old and new parts of the site, and straight into one of the new contemporary art galleries. In an unusual move, the bridge is completely opaque, and acts as 9.3m-wide exhibition area.

Undoubtedly, the most successful part of the scheme is what Stanton Williams has done with the main entrance and front elevation. It has removed the metal gates and railings that went between the two wings of the front elevation and replaced them with stepped outdoor auditorium seating, book-ended by discreet glass pavilions. One of these contains the lift, the other will be used to display artworks in the manner of Trafalgar Square’s Fourth Plinth. In addition to improvements in accessibility, Stanton Williams has further brought the presence of the museum into the street by designing coloured geometric paving that spills onto the road, making it feel more like a public square. It is now an area to enjoy lingering outside, as many of the pupils at the lycée opposite do in their lunch hour. The newly cleaned Nantes white stone helps the building glisten.

This considered approach to the entrance and visitor arrival continues inside. In the main hall, which was already a beautiful stone vaulted space, the architect has inserted a new floor of matching stone from Portugal, that gently ramps in places to overcome small flights of steps that had previously caused accessibility issues. The restaurant is located in a wing to the west of this hall, the shop on the opposite side. The newly-excavated basement, with its palette of bronze, concrete and oak, has been slotted in between the original stone foundations of the 19th century building, exposing them for the first time in all their glory. It feels appropriately weighty and spacious at the same time. 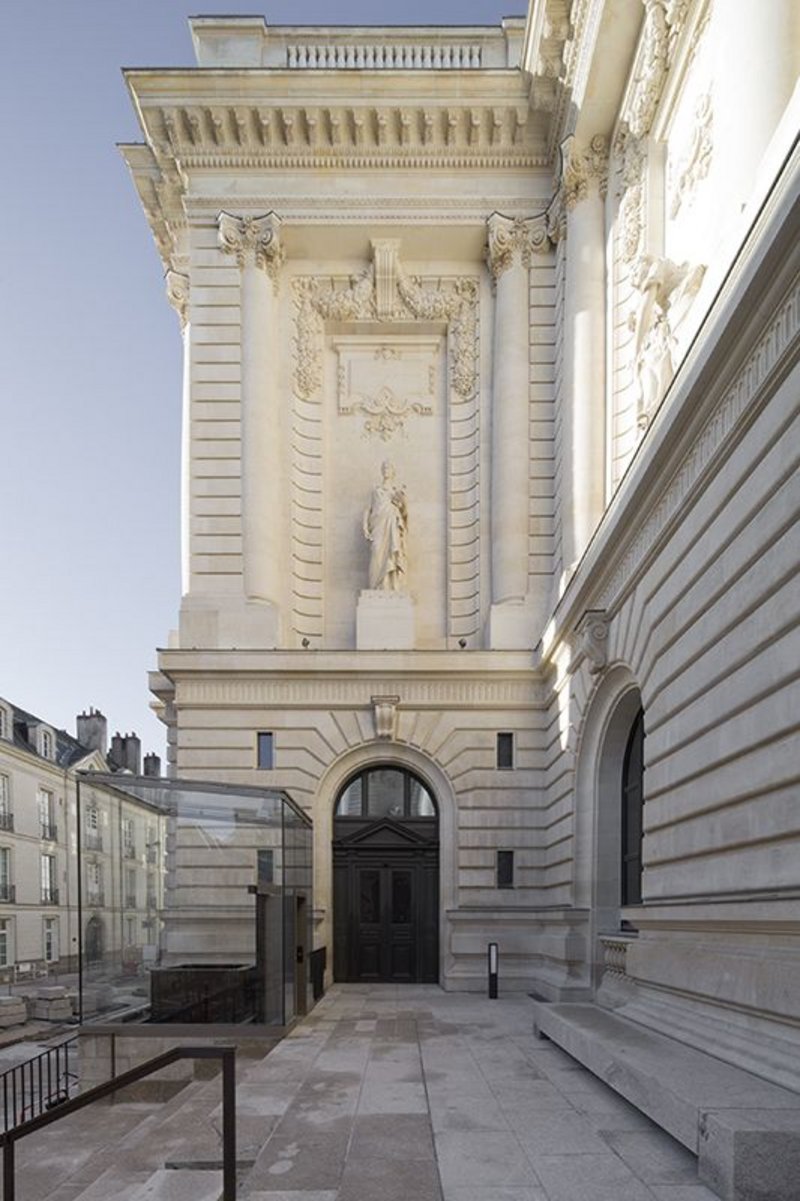 It is difficult, however, to see the rest of the building and its complex arrangement of parts in such a positive light – even the new feature marble wall to the cube, which the architect is so proud of.

The thing is, the original Musée des Beaux-Arts is in itself a magnificent building. Buildings like this are never two-a-penny, even in France. Its symmetrical beauty, rusticated at the base and dripping with fruit and statues on the outside, and what’s left of the original design inside, are fabulous, including the phenomenal pair of staircases that ascend in opposite directions behind the great hall. Yet, as at the castle, its redevelopment beyond the entrance seems to treat it as an insignificant building. Only certain rooms are listed, so Stanton Williams could mostly do what it liked, and it has.

As a result, the natural flow and character of the original building has been stripped out. After such a splendid and promising entrance Stanton Williams’ renovation lacks fun, and leaves one feeling how incredibly tiresome and uncompromising the principles of contemporary architecture can be; even at those projects with €48.8 million to spend.

Why? Because the renovation has adopted the white walls museum formula as dogma, ripping out nearly all the original panelling in the upper galleries in favour of shadow gap skirting; replacing smaller paned skylights with far larger sheets that do not resonate with the proportions of the historical spaces; and then painted everything white, regardless of what was already there, or what lay behind previous renovations (perhaps there could have been an opportunity to scrape back the 1960s paint in the patio to reveal the impressive trompe l’oeil designs visible in earlier photographs). The several painted feature walls only serve to demonstrate that the architect lacked courage in this museum setting.

The justification is that the architect wanted the curation of the artwork to follow its chronology, with old masters on the ground floor, modern art on the first floor and contemporary art in the cube. In doing so, Stanton Williams has not listened to the building, but rather tried to trick it into being a different museum from the one it is and should be. The ground floor of the original building was, says Richard, designed and used until the 1990s as the city library. The spaces are lower, less well-lit and not designed to accommodate large works of, for example, religious art. The first floor spaces, on the other hand, are. Likewise, those still partially historical spaces are being used to display often much smaller works of modern art. What’s more, to accommodate as much art work as possible, Stanton Williams has replaced intriguing high-back early 20th century gallery benches with over-sized and under-designed minimalist exhibition panels in the centre of nearly all rooms, which are overbearing and complicate the circulation.

The new gallery infill building to the rear does not provide great standalone spaces either. Columns interrupt the galleries, a weird half wall separates the window to the street that is supposed to act like a shopfront,  and toilets come randomly directly off the galleries on each floor. Neither does the tight stairwell feel deserving of its opulent translucent marble wall. 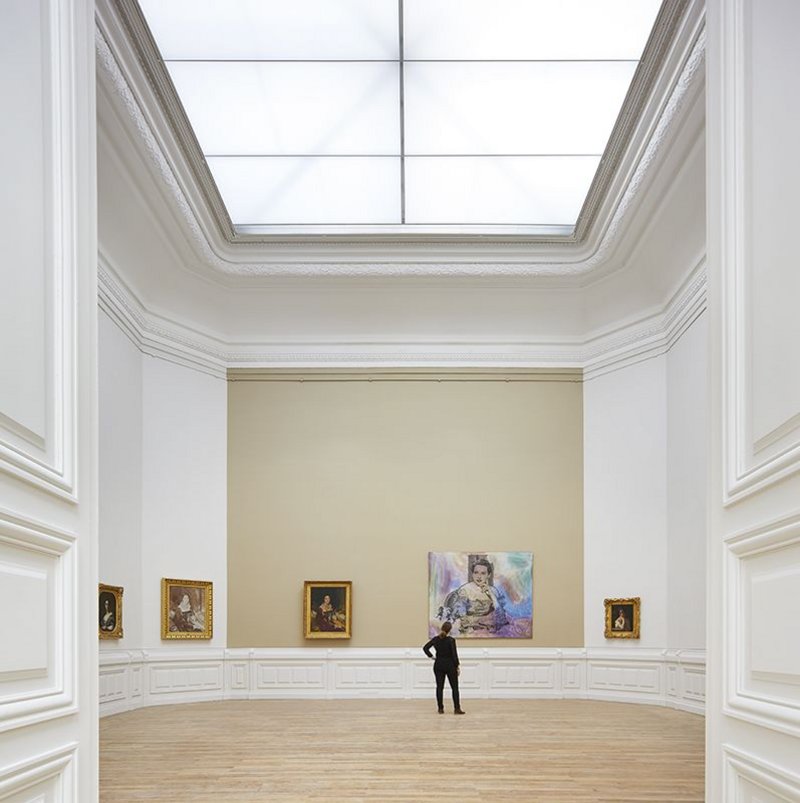 One of the new galleries where the original panelling is still in tact. Credit: Hufton & Crow

On top of these issues, the building lacks a space to respire, not helped by an over enthusiastic director and Susanna Fritscher’s current installation in the central atrium/patio which fills the space and prevents free movement. The initial hanging is also so dense that every other painting could be removed and it would still feel busy. Stanton Williams is not responsible for the hanging, but every spare space has been put to use for artwork, adding walls around the upper patio gallery where perhaps they should have been taken away.

This adds to the problems of circulation in the building. As the museum is fee-paying, it has only one entrance. The original library entrance to the rear has been closed off to the public, potential entrances in the new buildings have not been opened. The circulation is confusing, with no quick access around the site. To get to the ground floor of the cube from the main entrance, for example, visitors have to either go up or down one level, then down or up again. What’s missing is a flow of people through the site and a big public space to pause. Downstairs and outside the four buildings are connected by narrow passageways. Arguably the cube shouldn’t be there at all. The patio could have been that large public court accessible both from the main entrance as well as the former library entrance.

Unlike the city of Nantes itself, after an impressive imposing start, the Musée des Beaux-Arts has a disappointing, confusing finish.