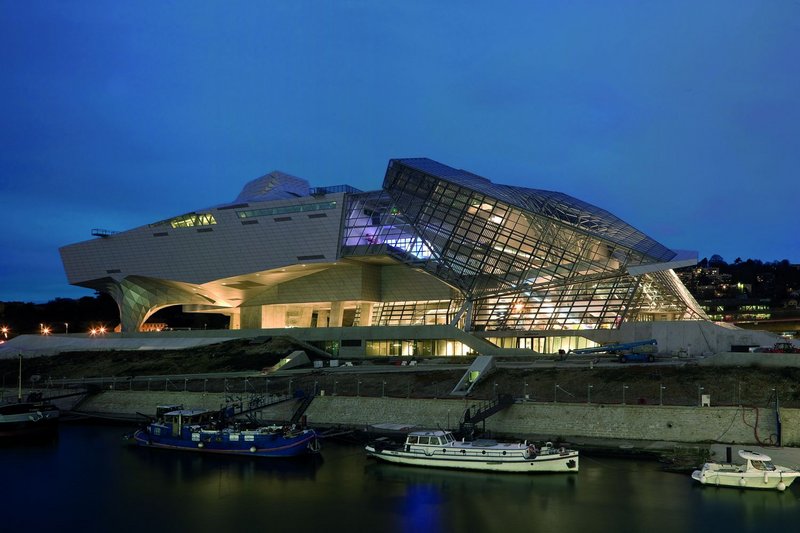 The local guide tells me Napoleon Bonaparte so loved Lyon that he wanted his mausoleum to stand at the southern tip of the city’s peninsula – the confluence of the Rhône and Saône rivers, where he might stare for all eternity past the merging waters to Marseilles. But I can’t imagine Napoleon is any less happy in his current resting place, sunk deep in the Parisian bosom of Les Invalides, surrounded by caryatids, in reverential red porphyry. The guide claims history backs him up. In 1793, when the city fell resisting the French Revolution, Lyon’s huge Place Bellecour was piled with bodies and its grand civic buildings razed; the only monument they wanted to build was a great stone column on the city’s ruins inscribed ‘Lyon made a war on Liberty! Lyon is no more!’ But, it seems, Napoleon felt differently. Coming to power in 1804 he abolished taxes on the stricken city’s fledgling silk trade, transforming it into a manufacturing powerhouse, and rebuilt the destroyed Place Bellecour in First Empire splendour. And it’s a shame Lyon wasn’t his final resting place, because the end of the peninsula is a dump: on a brisk Sunday morning there I even got propositioned by a lady of the night offering to help me put the ‘bone’ into Bonaparte.

But it’s solving the problem of the blighted, post-industrial portside part of the city that Coop Himmelb(l)au’s Musée des Confluences is attempting to remedy. You’re a way from both Place Bellecour and the charming Italianate streets on the Saône's west bank; this is the coalface of the city. A dull, flattened brownfield area, only now showing the first green shoots of regeneration with new quick-build offices and a life-giving tram extension passing swiftly through. Before the rail line and the huge elevated autoroute north into the city from Marseilles, the only connectivity would have been huge chains thrown across both rivers to deter any waterborne foe. The new tram is part of a long-term strategy to draw the city down to the rivers’ edge; the €185m Musée des Confluences, the result of a 2001 international competition, is the other.

Opened last December, the museum is itself a confluence of sorts: the merging of two of the city’s collections, one of natural history, first established as a ‘Cabinet of Curiosities’ in 1777 and later bolstered with thousands of items brought back by evangelising missionaries; the other the ethnographic collection of the city’s 19th century globe-trotting millionaire industrialist Émile Guimet. Over 250 years, the city had amassed a collection of palaeontology, mineralogy, zoology, entomology, ethnology and Egyptology amounting to over two million artefacts, scattered over various sites or stored away. The client, Rhône Regional Council, wanted the new museum to unify the collection, make sense of it, make it intelligible to a lay audience and create a landmark building that would provide a dramatic user experience and announce itself to the city and wider world as a new kind of museum.

Broadly triangular in plan and 90m at its widest, the 46,500m2 museum is no shrinking violet and has been called  ‘something remarkable which should provoke curiosity’ by Coop Himmelb(l)au’s outspoken frontman Wolf D Prix. Positioned right on the prow of the peninsula, it looms large in every direction, most conspicuously from the raised road, and is a car crash of concrete, steel cladding and glass covered steel structure. Prix is keen to assign meanings to all the forms and the assemblage here is given some sense of order by being broken down into ‘the plinth’, ‘the cloud’ and ‘the crystal’; the distinction does actually help. In the concrete plinth you’ll find the large and small auditoria, group workshop spaces and museum plant. The windowless, steel and steel-clad Cloud houses the museum’s nine exhibition halls over four levels; with the Crystal broadly defined as the reception, lobby, shop and circulation, connecting these and the halls to each other. Key to the whole concept is the ‘Espace Liant’, an exterior space that manifests itself around the 14 posts and three piers that spring from the plinth into the belly of the 6000-tonne steel cloud. Accessed from the Crystal, this open esplanade offers visitors a ringside seat view of the merging rivers. Apart from this there is no other function to this space, but it was an imperative for Prix that the museum did ‘not block the confluence and also be an expression of its turbulence.’

On a good day you can apparently see their different coloured streams, but on this dull one, the two grey rivers merged languidly despite a winter swell, seeming to push the boat out to underperform. It’s all a bit bemusing, so perhaps the ‘turbulence’ made so manifest in the overt, plunging vortex of the Crystal’s steel structure is to be read on a metaphorical level; in the high and low level traffic flows, in the rail lines or whoosh of a speeding tram. Perhaps it speaks of a turbulence yet to come from a fully built-out and occupied peninsula. As it is, whether there’s turbulence or not, its epicentre is currently the mangled steel of the Crystal – the first thing the visitor will address. Its effect ripples out, contorting the 190m long exterior skin, with exhibition halls in the Cloud subject to these formal forces. The road-facing east side gets most manipulation, the ‘slow’ ‘river face more sheer, rising out of it. It seems counter-intuitive – you’d expect the ‘fast’ face to be the smoother one, and so would Prix, which is why he reversed it. ‘It was a deliberate contradiction; like a Bach fugue where he reverses a normal rhythmic for compositional effect,’ he says, justifying the rampant shape-making that’s been occurring here. From the south the halls, expressed as a skin of various angled steel planes, cantilever over the Espace Liant, their weight seemingly supported on no more than one curving pier that spirals into it.

Internally, it’s all about the experience, which starts in the Crystal and the great steel vortex of the museum’s gravity well that greets you on entering. More than gestural, this is a primary support that reduces the Crystal’s overall steel requirement by a third, sucking the glazed facade deep into the centre of the space. The stairs, escalators and ramp that carve and curve through the space are as much about moving you round the sizeable glass volume as they are about taking you anywhere. There are lifts, but the ramp is a sheer indulgence, a kind of cultural helterskelter that might show exhibits on the way to the four hall levels, like Wright’s New York Guggenheim route busting its coil.

Lifts and ramp lead to the lobbies that run centrally between the halls; a kind of stacked canyon of space, cut out to allow views down as you ascend, allowing light to spill down from the rooflight that runs along it and links to the glass wall at the south end, giving views back to the confluence. After the great shakes of the lobby circulation in the Crystal, this feels much more underplayed. You might counterpoint the decadence of this circulation with the windowless ‘black boxes’ of the halls themselves, shaped according to the forms that manifest themselves on the steel-clad exterior. The sceneography for these rooms was let out to different designers, so there are varying approaches to how the different collections are handled, some more successful than others. The collections themselves are eclectic; modern sculpture might appear in a show on Neolithic man; one feels that if the collection does give it national importance research-wise, it’s not obvious. Exhibits are selective and follow directed narratives; museum curator Nicolas Dupont acknowledges that, but claims that the point is to have general appeal – most importantly to attract people and families who have previously been intimidated by traditional museums. This also accounts for the generous café spaces at lower and roof levels, bypassing the museum and accessible for free. The dramatic circulation and entertainment spaces are about presenting a social face to the city; one that appeals to everyone rather than just for corporate events. Dupont says this will also be supported by subsidised tickets, late openings and outreach programmes. He tells me the museum is not anticipated to ever run at a profit, adding that public collections wouldn’t exist if that was a pre-requisite.

A museum is a kind of mausoleum – both hold dead things – and as Napoleon in his sunken splendour might affirm, they are more about the viewed than the viewer. It is this fundamental relationship that has been responsible for the civic gravitas of the world’s great institutions. They take it as given that the things inside its walls are older and more important than we might ever imagine, and last longer than we ever would. We are dust, and this respect for the objects was expressed in classic architecture and forms (modernists included) that tried to embody, as best as possible, that sense of timelessness. The 21st century however has seen a shift in the dialectic. Now it is generally the visitors who are the point of focus and for whose needs the physical space of the building is arranged. Collections are pre-curated for ease of user intelligibility; the route dictated by the joint variables of optimum content for an optimum time slot.

The Musée des Confluences is not a bad example of this typology by any means; in the run of things, it’s probably quite a good one; there’s clarity to its formal language, albeit metaphorical, and the visitor experience is characterised in places by heady drama. But it troubles me because its prime design motivation is the stated desire to express turbulence and change. At 15 years in gestation, one has to ask the question that if society and the means by which it communicates has shifted even in this time, at what point do these forms of frozen flux cease to be relevant – to become ‘dated’ themselves? And what are we saying if the experience takes precedence over the exhibits? Despite that, when pressed Prix is adamant that his response would be the same were he to design it again.

Faced with a similar conundrum, Pei, for example, chose a timeless pyramid at the Louvre, Mies a classic enclosure and an interior of compromised flexibility in Berlin, and Cedric Price a theoretical ‘fun palace’ framework, subject to constant change and reinvention. All these try, in their own ways, to deal with the immutable truth of our own mortality while responding to the place of the artefacts that track our time on the planet. Coop Himmelb(l)au’s Musée des Confluences is brash and bold, a swirling monument that attempts to draw the whole peninsula within its frenzied vortex – to generate an energy that this post-industrial peninsula is lacking. That may serve a purpose in terms of a developing urbanism but I wonder if, in all that palpable tumult, there was any room for the museum to consider the resolution that immediately follows the rivers’ turbulent confluence; to express their calmness rather than just their chaos; if, for a museum, still waters should actually run deeper?