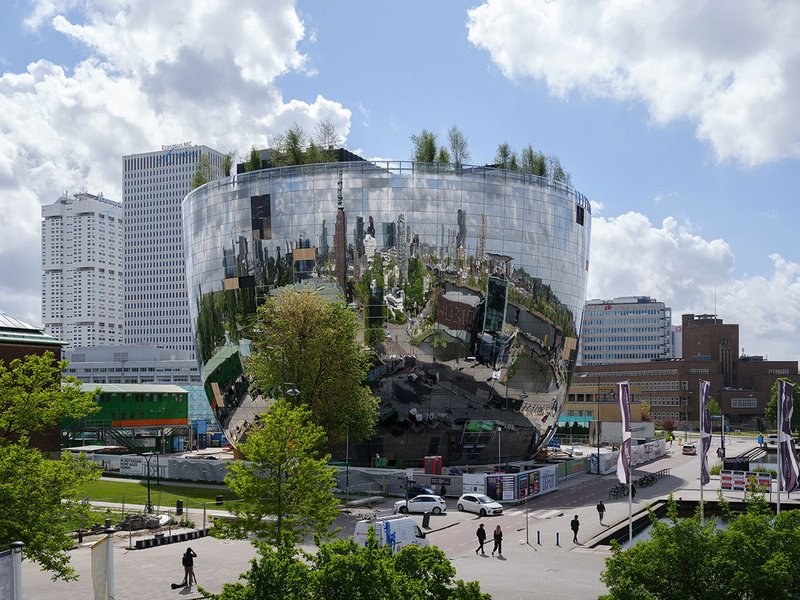 In architecture city Rotterdam locals have a habit of giving new buildings a – usually funny – nickname. Ben van Berkel’s Erasmusbridge is called The Swan, the Central Station ‘Kapsalon’ is named after a local fast food dish, served in a disposable metal takeaway tray. Getting a nickname means a building is recognized and, whether it’s as beautiful or ugly, it is seen as a favourable sign.

The new Depot for Museum Boijmans van Beuningen immediately evoked associations. The Flower Pot, Salad Bowl, the Grand Mirror – these are a few of the names that Rotterdammers have come up with for the mirror glass building, designed by Rotterdam practice MVRDV.

In September 2020, the so-called Silver Opening took place on the occasion of the architectural completion, and the press was allowed to look inside. The interior was not yet finished, with 151,000 works of art still to be moved in, but the ‘radically different’ depot has already received a jubilant review in the NRC newspaper. The excitement is due to this storage facility, seven floors and 40m high, being located not on an industrial estate, but right next to the Boijmans building in the Museum Park in the centre of the city. From September 2021 the public may enter the depot to see how the collection – including works by Van Gogh, Rembrandt and Rothko – is preserved, and to take a look at the restoration studios. Nowhere in the world has this been done before.

There is already a lot of interest from museum directors from all over the world to get to know the concept of the depot better, says Boijmans’ director Ina Klaassen. The building itself also attracts a lot of attention. Passersby marvel at the curved facades that reflect a deformed Rotterdam skyline – and in which you see yourself walking as through a laughing mirror. Tourists kneel to capture the building with their smartphone camera; staff at the New Institute, opposite the Depot, have had to help people out of their pond when they had taken a step too far back. The city park on the roof will undoubtedly become a hotspot and won the Rooftop Award in 2020. The 7,000 (free) tickets for the Silver Opening were gone within three hours.

Excitement about the Depot – built at a cost of €85 million – was there right from the presentation of the plan in 2013. There was the spectacular design itself, followed by a lawsuit brought against the municipality by MVRDV which was disqualified from the competition because architect Winy Maas was alleged to have spoken about the assignment with Boijmans director Sjarel Ex over a cup of coffee. MVRDV won the case. There was an angry neighbour, the Erasmus Medical Center, which objected to the reflective facades for fear that patients would become overstimulated; some of the facade panels got a matte coating as a result.

Meanwhile it was announced that the museum building – in a deplorable state – will be completely renovated by Mecanoo. One might wonder why the new depot isn’t part of that plan: the building did not have the storage space. ‘When the museum opened in 1935, all works of art were in the gallery. Now it is about 7%,’ explains Klaassen. The remainder was stored in the basement, which was leaky and flooded when it rained. When the museum closed for renovation, the collection was moved to sheds spread across the city, waiting to be moved into the depot where the artworks will be stored high and dry at +8m Normal Amsterdam Peil (above sea level). At the same time, the new building offers the possibility of showing works of art that are not on display in the museum to interested people; after all, the collection is public property.

The idea of ​​the public depot is to show ‘the back of the museum’, Klaassen explains. What happens before and after an artwork hangs in the gallery; how are works stored, transported and restored? ‘This part of the museum is not about artistic quality’, says Klaassen. ‘It’s about such questions as: how was a work made, with which materials and how do you treat them? You no longer see the “sanctity” of art in the mass of works. It offers a completely different experience.’ Through this objective approach, the museum hopes to attract new audiences. Its aim is 150,000 to 200,000 visitors per year. 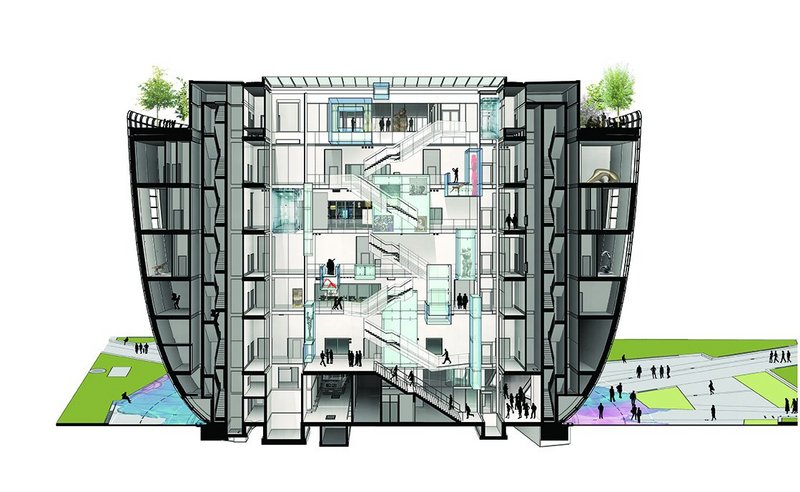 MVRDV’s Maas understood that this requires more than an innovative concept and a glitzy facade. Besides, you may expect something for the entrance fee which at the moment is being proposed around €17.50. He developed a series of ingredients to make a visit to the Depot unforgettable. Trees are being be planted around the building, and a light artwork by Pipilotti Rist is being installed to provide a fairytale atmosphere. ‘It’s a cross between Alice in Wonderland and Night at the Museum,’ says Maas. Then there’s the ‘James Bond’ entrance, invisibly concealed in the facade. At the push of a button, a double door moves forward out of the mirror glass; the technology comes from a manufacturer of passenger buses.

Inside is dominated by the heavy concrete construction needed to create the intricate shell shape and support the roof garden and archives. Maas jokingly calls it Fort Knox, the ultra-secure gold store in America. He wants you to feel that there’s a treasure to guard – after all, the Boijmans collection is worth €8 billion. In addition, there are the collections of private individuals who can rent space there.

In contrast with the massive concrete walls Maas created a series of transparent spaces that act like shop windows. In the corner of the hall, boxes for loans are made and paintings packed. If you look up you can see how pre-selections for exhibitions are made in the gallery spaces.

From the hall, a long staircase leads criss-cross up through the atrium, a 28.5m-high space that evokes Piranesi's drawings. The 50 safes are located all around. To reach these areas you must book a guided tour, but even if you don’t, there is a lot to see. Works of art will be displayed in 13 enormous steel showcases. The goods lift is a moving shop window. And then there is the large glass lift that takes you to the roof park, which is freely accessible (though you must reserve a time slot online).

The view over the city is spectacular, as is the birch forest that has been built on it, while the reflection of the sun in the mirrored glass facades of the catering pavilion creates a special light. In the pavilion you can drink coffee, rent rooms for events and meetings, and of course there will be art on display.

Let's hope that by September the situation will be normal enough for the festive opening. Meanwhile, on their daily corona walk through the city, residents of Rotterdam can enjoy the sight of the building that, despite its prominent presence, also creates space in the Museum Park, as it catches and throws back views from all sides. The museum received a letter from a Rotterdammer saying he would be very disappointed if the nickname became The Flowerpot, ‘because I think that is very ordinary and does not do justice to the building’. He insists on ‘De BlikVanger’ – the Catcher of the View. 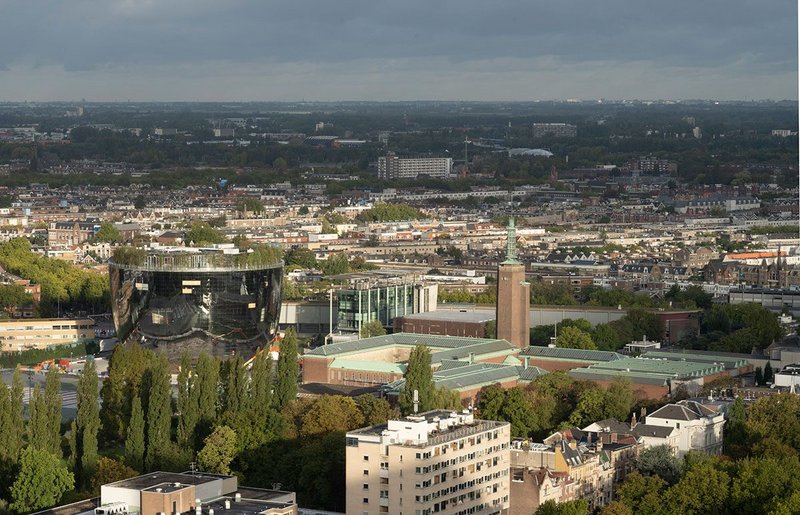