Leiden’s Naturalis has changed a great deal in the last 20 years. This remade, mismatched colossus is now large enough to hold its massive collection

You couldn’t make it up. The main body of Leiden’s Naturalis museum was constructed in 1998, attached by umbilical bridge to the city’s 17th century Pesthuis (plague house); but within 15 years became host to a new, expanded function – its cord cut and a much larger, parasitic organism attached to feed off it. Severed, appended to and stitched up again; it sounds like some infernal, unnatural act straight out of Frankenstein. And for Dutch architect Fons Verheijen, designer of the original museum, it must have felt like it;  with him in the role of the gothic horror’s long-suffering Victor.

But perhaps this was all to be expected, as Naturalis, the Netherland’s combined national museum of Natural History and biodiversity research centre, already held something of a hotch-potch of archives – part of Dutch King William I’s private 1820 collection and the national geological archive. But then, further post-millennial mergers with Amsterdam’s Zoological Museum and the Dutch National Herbarium created one of the world’s largest natural history collections, with over 42 million specimens.

Even before the collection reached this size, alarm bells should have been ringing over the spatial demands on the building in 1998. At the time, the €60 million project created a public museum, archive storage tower and research institute on a site that, even then, required Verheijen to construct a steel bridge over a wide road on Leiden University’s sprawling 80s campus to harness the space of the leased Pesthuis – then acting as a reception, café and temporary exhibition. So when the archive was further enlarged, visitor numbers boomed from 150,000 to 400,000 and the City of Leiden decided to sell off the Pesthuis, Verheijen’s number was up. The resulting 2013 OJEU competition to reconfigure and expand Naturalis to meet its new needs was won not by Verheijen’s submission, but Neutelings Riedijk’s.

For the client, this change of architect did not fare well. Neutelings Riedijk’s creation of a whole new museum adjacent to Verheijen’s design and the overhaul of that into administrative offices and expanded archive, was, Verheijen felt, ‘mutilation’ of his design, and he sued. Naturalis, facing a protracted court case and with a new museum to build, settled out of court to the tune of €1.5million. With Verheijen now laying claim only to the untouched 60m high archive tower, the client also bizarrely promised to fund a detailed CAD model of his lost museum; a virtual Matryoshka of his idea now sat like a 3D seed in the belly of its offspring.

Given the history, and with over 18,000m2 of the 38,000m2 project involving reconfiguration of the existing, Neutelings Riedijk’s €72 million melange of old, new and repurposed is, not surprisingly, a curious beast. Gone is Verheijen’s link bridge and the exhibition space has become open plan offices on the atrium’s east side for the research institute’s 320 full time staff. 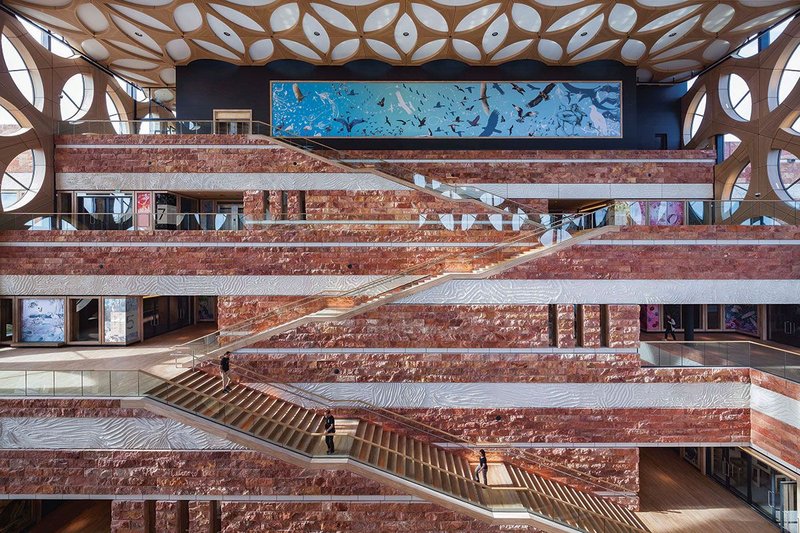 The new atrium’s north face reveals the vertiginous ‘stone’ access stair to the attached exhibition halls – each with their own generous lobby. Credit: Scagliola Brakkee Fotografie

On the west side of the original block, new collection depot spaces for the archive are crucially isolated from the ‘clean’ archive tower (even the ebola virus is stored here) by a narrow quarantine zone where samples can be cryogenically sterilised before being re-admitted into the tower. A new, state of the art laboratory block to the west of the archive tower houses laboratories for the research institute, which had previously had to rent them from Leiden University.

Internally, the change has been root and branch, almost completely gutting the building and inserting a new programme into the host body – hence Verheijen’s ire. But it has transformed the facility’s storage and research capabilities, future-proofing it in the process. The original architect may have drawn cold comfort from the fact that the existing complex on the south of the site looks virtually unchanged from outside. Perhaps as a sop,  metal cladding  on Neutelings Riedijk’s new lab dutifully continues the original’s formal horizontality, but this must have merely stuck in Verheijen’s craw.

But, structural as those internal changes were, it is not for them that the new Naturalis complex is instantly memorable. It is more for the striking 40m high cuboid atrium that announces unequivocally the building’s public nature, in a campus of modern but otherwise faceless university faculty buildings. The volume also aims to give equal weight to the east and west sides of the site in terms of an entrance statement, depending on whether you arrive by public transport or car. That aside, the entrance otherwise dissolves distinctions. Visitor, worker and academic researcher all pass through this central, democratising orientation point.

It is this hybrid structure of precast concrete parallelograms and steel creating the strange hexagonal/elliptical box form that demarcates the existing from Neuteling Riedijk’s stacked floors of public exhibition spaces, strikingly clad in Iranian red travertine and banded by a horizontal frieze of patterned cast concrete.

And if it looks to the reader to formally resemble Mecanoo’s 2013 Library of Birmingham, that is no coincidence. Both architects were, they say, inspired by The Netherlands’ only mountain, the Vaalsberg, to offer locals the tantalising prospect of popping their heads above sea level – although given the nature of this building, the location and metaphorical allusions to geomorphology and strata might seem more justified here.

Stacking was inevitable. On a tight plot, Naturalis demanded over 20,000m2 of museum and ancillary spaces, forcing the architects to build up rather than out. Not only that, but the design had to take account of new exhibition practice, each floor dedicated to themed ‘experiential’ curating – accounting for the nine ‘black box’ halls ranging from 6-12m in height, with the tallest allocated to the resident 150 million-year-old Camarasaurus. For that, the client wanted the flexible, 21m clear spans between two 6m concrete service cores that the design delivers. Whether Naturalis will see curatorial need for the rooflit slits that the stacked halls’ offsets reveal in section as they rise remains to be seen; currently they are blacked-out, but were retained at the architect’s insistence, despite value engineering, to allow artefacts to be viewed in a new light in the future.

The user interface for all of these exhibition halls is, of course, the vertiginous staircase that connects them, running along on the atrium’s north side; which, combined with the zany atrium volume, is something of a show stopper. The overwhelming gorge effect is partially mitigated at ground level by the expanded shop, a large restaurant and access to the first floor auditorium, but there’s no escaping the immediate sense of a cliff-face – due not least to the cleft, red, crystalline travertine that clads the in-situ cast structure.

It’s set off even more by Dutch fashion designer Iris van Herpen’s 263 white, cast concrete panels, 1km of them in total, which run in bands around the inside and outside of the building. But the general weightiness of stone effect is oddly exposed as a conceit; at its most obvious it’s the shift to timber soffits at the entrance foyers of every exhibition hall level but it also appears on closer inspection in the shadow gaps between stone panels. The timber stair treads also push the reading of their stone walls as lamella rather than something more substantial. Crowned at the top by designer Tord Boontje’s huge mural, one of a number scattered throughout the building, what one initially assumes is monolithic turns out to be an agglomoration of veneers.

This idea of veneer thus becomes a theme. The complex, 550mm thick hybrid atrium structure of precast concrete and steel is internally faced with a perforated timber lining, which does help with acoustics, but it’s a move that reinforces the sense of artifice. The structure’s internal concrete feet are furthermore clad in Portuguese limestone; a late change to the original specification of the red travertine after the stone contractor’s bank refused to lend the money to source more of it, falling victim to America’s latest trade embargo against Iran. Forcing yet another material to be introduced into the mix here, it’s the first time I’ve seen a building submitting to the ‘Trump Effect’. 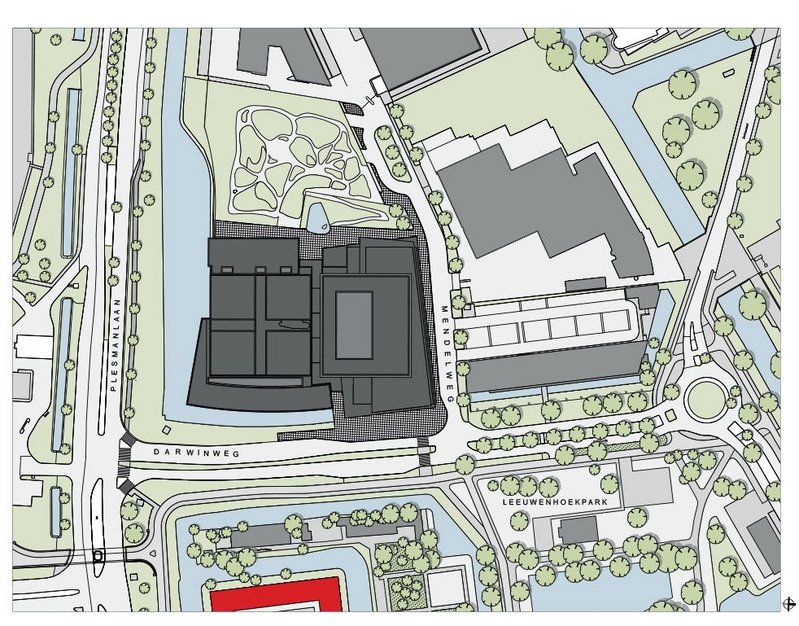 The site plan of the building shows the position of the Pesthuis ( in red) – formerly the main entrance to the old complex.

Neutelings Riedijk attests to the fact that material expression was not its main concern here – rather the desire to create a particular kind of atmosphere – but I feel the display of all the different materials, especially where they meet, distracts the user from the clarity of what is otherwise a highly methodical design. Here, various layers of concrete, stone, steel and timber, metal cladding, glass – even the firm’s signature ‘snaking’ columns at ground level, mask a complex and successful programmatic reformulation of an existing building. It also fails to intimate the story of construction logistics, such as that of the slowly installed 16m deep screw piles for the new building; an operation of such delicacy that not a wing of some rare 17th century flying insect was vibrated off to facilitate it; while all the time allowing these specimens in the archive tower to be accessed for research while it was constructed. Such nuance seems lost in the bombast of the approach.

But still it lives. Beneath a taut geometric epidermis, stretched over augmented ligaments, stitched back to veneered bones, and bound forever to its original body, Naturalis, in its new guise, is a monster that has been revivified for the future in a way it never could have been in its former guise. Mary Shelley would be proud.