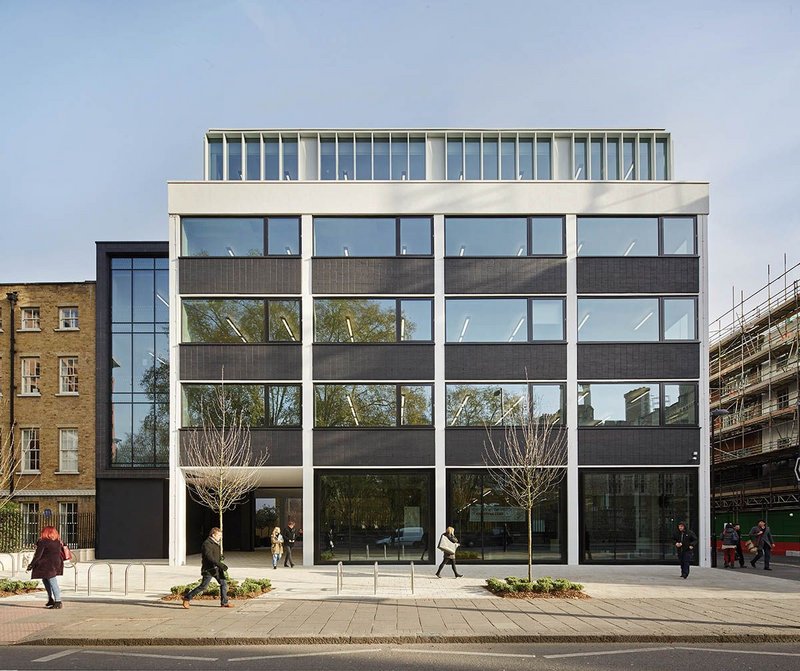 Boom times in the 1950s and 60s deposited countless offices, warehouses and factories across the UK. But as the industries they were made for declined or moved abroad many are left awaiting an uncertain fate – often disregarded architecturally by planners and the public, and degenerating towns and cities.

Maple House is a typical example, facing Bunhill Fields on City Road by Old Street’s Silicon roundabout in London. But, aside from the financial imperative that makes it possible, its location is almost inconsequential. Now known as C-space, the building was once a carpet factory, and despite its prominent location, it had become sorry-looking and forgettable. It was most recently used as server park for, no doubt, a glitzy City office.

No surprise then that when Buckley Gray Yeoman was directly approached by developer Helical Bar in 2013, Islington Council had already welcomed a pre-app for demolition and new build. But this is why architects are necessary, and how they can be brilliant.

It soon established the building could be retained through new windows, external painting, addition of a ‘subservient’ pent­office and reorganisation of the interior. 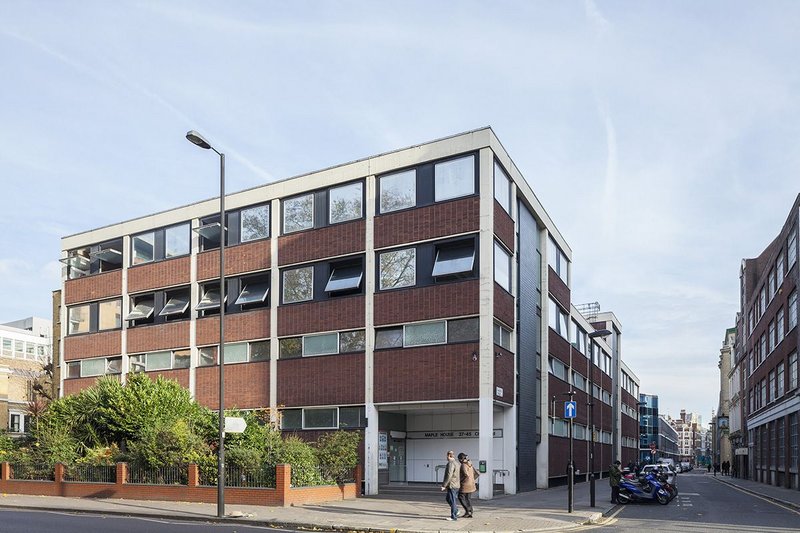 In three masterstrokes Buckley Gray Yeoman relocated the entrance to the courtyard, reviving it and creating a new daytime public right of way through the building. It cut back the ground floorplate by 1.5m from the perimeter transforming the dark, dingy basement to light lower ground floor. And it pulled the final of the five bays back to align with the listed Georgian house attached, while creating a more open forecourt and carriageway arch to the new entrance.

As a result, much of the original building and structure remains. The structure and brickwork has been painted white and black to emphasise the vertical aspect and create a more contemporary, striking look.

The architect stripped the building back to the frame, keeping the mid-height double skin and cavity brickwork beneath the windows. When the additional level was created the roof was removed in response to the council’s sensitivity to the height compared with the neighbouring Wesley Chapel. This careful work shaved off 500mm. The new roof is simple deck and ply, and sits on top of 12,000ft2 of additional office space – achieved by recessing curtain walling with 250mm-deep caps to add depth and interest. 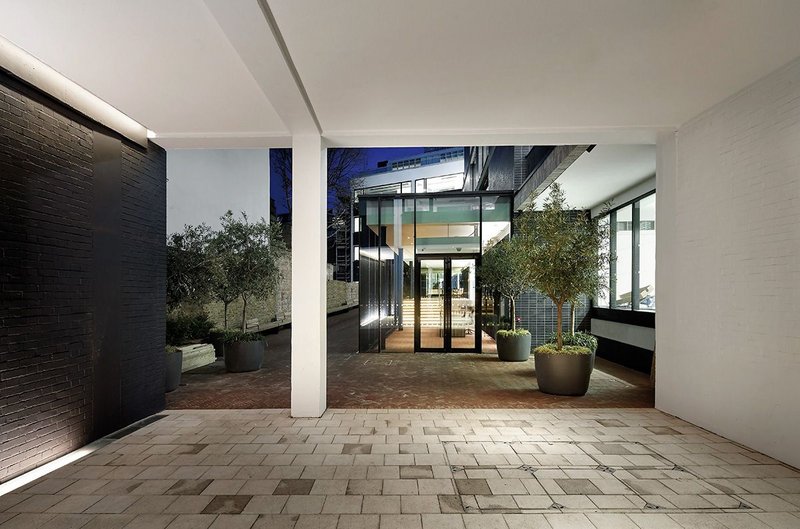 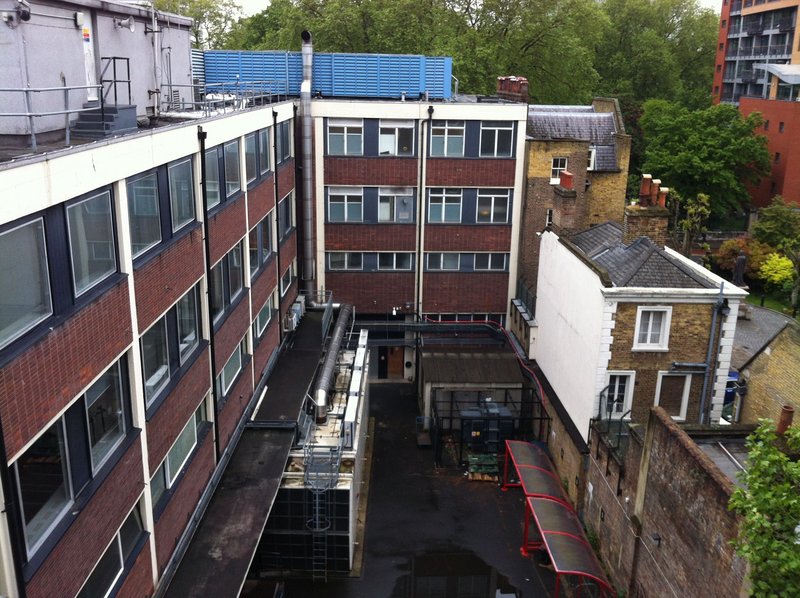 The courtyard previously was underused; dark and dingy with a huge generator at its focus.

On the ground floor, bricked up elevations to the street have been replaced with full-height glazing that lets in light to both the ground floor and former basement. Bricks removed at this level have been reinstated to infill the original dog-leg roofline on Epworth Street, making it uniform and ready for the new storey. All the windows across the building have been replaced with double-glazed operable aluminium alternatives, with the undersides dropped to even up heights across the facade. On the side elevation, new decorative tiles have been commissioned to match the missing 1950s originals. Their pattern has also inspired the frit on new full height glazing on the dropped back bay.

The carriageway arch, excavated beneath one of the bays, leads to the newly public courtyard. Here, the focus is the entrance, a glazed pavilion which overcomes the original 1.5m step in ground level height from which carpets were once lifted straight into the back of lorries. Exterior and interior are paved with red bricks in a herringbone ­pattern. Along the entire Epworth Street elevation the building has been extended enough to increase core space around the existing lift shafts, saving money and construction headaches. Either side of the core, this extended space is used for generous terraces, faced with stack-bonded grey bricks, with horizontal soldier coursing elsewhere.

Inside, the building shell has been left purposefully raw and industrial to contrast with the City of London just metres away. This is to attract tenants more interested in the community of Shoreditch than the other direction. Buckley Gray Yeoman has freed up the plan by removing two of the building’s five stairs – rendered unnecessary by modern fire engineering. Services are in a 250mm-deep plenum of air in the floor; beneath the fan tiles are small air conditioning units that can be individually adjusted and moved.

Ultimately the building’s boundary position has attracted Mullen Lowe, an advertising agency whose clients include the Post Office, British Heart Foundation, Persil, Seat, Lenovo, Etihad and Samaritans and whose intention is to give a buzz back to the building with, for example, projected film screenings in the courtyard. The agency signed up early, taking the lower ground to second floor, as well as half of the third floor. Fit out is designed by Studio Octopi, and at 46,000ft2 is the practice’s biggest project to date.

Following an invited competition in May 2015, the interior design brings together all the previously distinct MullenLowe Group agencies. Studio Octopi’s overarching concept integrates the three agencies as the ‘City of MullenLowe’ with the unifying motto ‘Non mihi, non libi, sec nobis’ (Not for you, not for me, but for us). Much of the material palette is consistent between floors, including Bolon flooring, Baux acoustic panelling and even a red rainwater pipe from the upper storey. Different colour schemes help each arm maintain some individuality.

The ground floor is the agency’s shared space and adopts the role of the ‘town square’, brought to life by park benches and a table ‘river’. Spanning the length of the building is 500m2 of open plan, reception, library, café and bleacher seating, much constructed of spruce plywood with a white oil coating. At the eastern end, four meeting rooms and the boardroom are arranged around a quieter space. Each room is separated by an ‘in-between space’ or ‘alleyway’ providing break-out areas lit by festoon lighting and lined in colourful acoustic panelling, also found in the editing suites downstairs.

The plywood continues throughout the work floors where it is combined with four variations of Portuguese cork pin board and exposed galvanised drywall partitions. At its most exciting on the first floor, Studio Octopi and MullenLowe London have reworked the traditional ad agency layout of closed offices for creative teams (two people, hired and fired throughout their lives together) into semi-open enclosures along a central spine. Each team is separated by three quarter height partitions that provide a sense of privacy and encourage ownership. Young creative teams are allocated one wall, creative director teams, two.

Rather than releasing teams fully from their offices, the solution keeps a level of privacy and quiet required in such concept-intensive and competitive work. By contrast, on the second floor MullenLowe Open and MullenLowe Profero unite around a ‘lawn’ break-out area and a ‘tech space’ which is both a workshop and an area for showcasing developing technology.

Without even a carpet in sight now, let’s hope others will follow suit.