Tucked away near the decommissioning Dounreay power station is Reiach and Hall’s Nucleus archive centre. The simple facade belies an unusual combination of demands 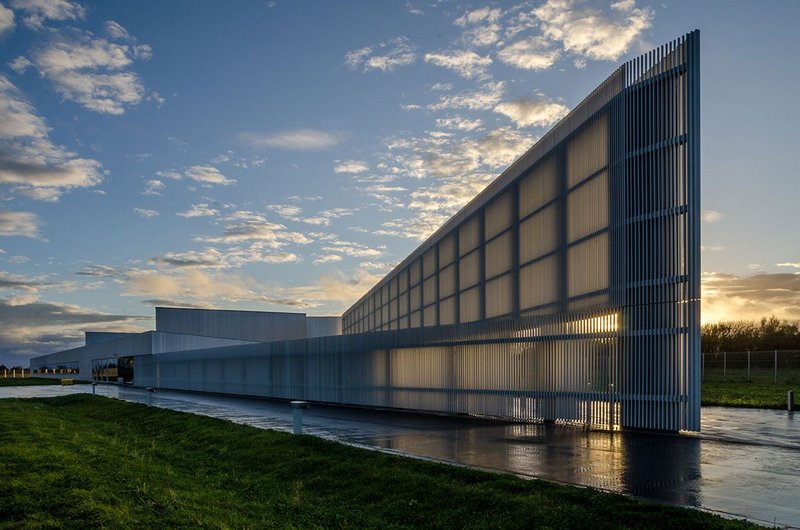 When Thomas Telford, engineer, architect and planner of genius, laid out the grid-pattern Pulteneytown in 1808 overlooking the harbour he had also designed at Wick in Caithness, the dominant industry was herring fishing. Later it was slate and other stone, still produced today. Naturally there is whisky, the Pulteney distillery being the northernmost on the mainland. But the largest employer in the area is the nuclear power industry in the shape of the historically accident-prone nearby Dounreay nuclear power and research station. Employment is gradually tailing off as it is very slowly dismantled but there is a legacy apart from the slightly radioactive beach there. This is the archive centre called Nucleus, designed by Reiach and Hall.

This is up on the edge of Wick Airport a mile or so north of the town. It is destined to hold the complete archive of the UK’s nuclear industry which at present is scattered in various places, usually the power stations and research establishments themselves. This is important not just for the sake of historical interest but as a practical record of what was done and where, which will be vital to know for long into the future. This information is especially sensitive, requiring total security as well as conservation-grade storage conditions.

Take all that and then add open public access, because the building also contains the non-sensitive county archives of Caithness along with meeting and search rooms, and you have a curious hybrid of a building type.

At first glance, as you drive up, it could almost be (and this is deliberate) another blank regional airport terminal or shed, set behind a security fence. Then the approach road curls round and brings you in at the razor-sharp apex of what turns out to be a broadly triangular building. The vertical strakes of the aluminium cladding become free-standing, enclosing and acting as a windbreak to an entrance courtyard complete with shallow pond. Behind this is the glass-walled entrance to Nucleus, the reception boasting a curious display of ancient manuscripts and modern – though recently historic – examples of nuclear nick-nacks: fuel rod casings, models of ships used to transport the material.

Archives are basically boring to look at, if fascinating to use and these – in parts of the building made of precast concrete sections – are no exception. Once you’ve cleared security and been accompanied through the building’s numerous series of checkpoints, you finally arrive in a place filled with rolling shelving, some of which has boxes of files on it. Files are files, they don’t look like anything much and there aren’t very many of them there yet: it will take years to sift through all the scattered archives and make the final selection for permanent storage.

Reiach and Hall’s Neil Gillespie, faced with an initial brief for just a windowless box, took this as a challenge. The archive vaults – one long and subdivided, one short, both top-notch for energy-conscious climate control – spring from the base of the building, protected by a return wing of back-of-house activities. He added the public areas and Caithness archive search in the visually delicate steel-framed nosecone of the building – what he calls the ‘crumple zone’ – and made pleasant single-storey offices – mostly for document processing – down one side.

To generate the plan, he took the angle between the ancient field boundaries here and due north. He then made two courtyards with triangular pools like the entrance court – inspired by the ‘lochans’ of the peaty Caithness Flow Country, and floored in reddish Caithness stone – to bring light into the centre of the plan. That light is mediated by an integrated artwork of translucent coloured panels by artist Steven Aalders, set inside the courtyard glazing.

And that’s about it, really. An open/closed, dark/light, public/private, distinctly odd and historically necessary building at the far end of the mainland. Its arrowhead form recalls weapons ancient and modern. It’s a kind of useful folly.