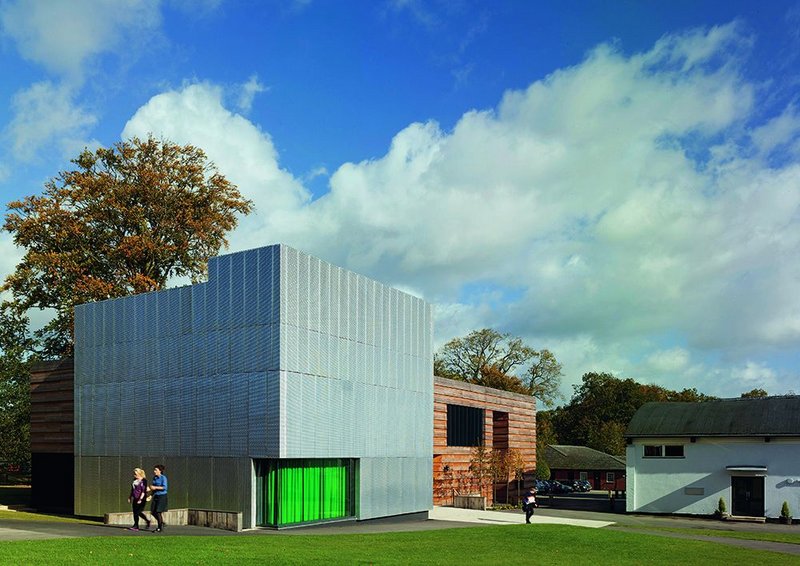 Replacing a car park, the communications building starts to define this corner of the quad.

A tall beech reaches its branches elegantly towards the shiplapped timber of Pangbourne College’s new communications building, its buds greening, ready to burst into bright leaf and rival the white flowers of the cherry trees beyond it. The college tennis courts, bluebell woodland, long lawns stretching away from the headmaster’s panelled study; this small school of just 400 girls and boys is surrounded by parkland of the quality you would expect in an Area of Outstanding Natural Beauty.

But parents don’t pay upwards of £28,800 a year full board just for a slice of countryside. And when headmaster Thomas Garnier arrived eight years ago he could see that the fabric of the school was turning off prospective parents. The rotting windows and cold, uninsulated 1950s boarding houses did not reflect the school’s care for its pupils. Garnier had diagnosed another issue too. ‘Pangbournians had become one dimensional,’ he says. ‘They talked about sport, thought about sport and they were always looking to the rugby pitches.’ 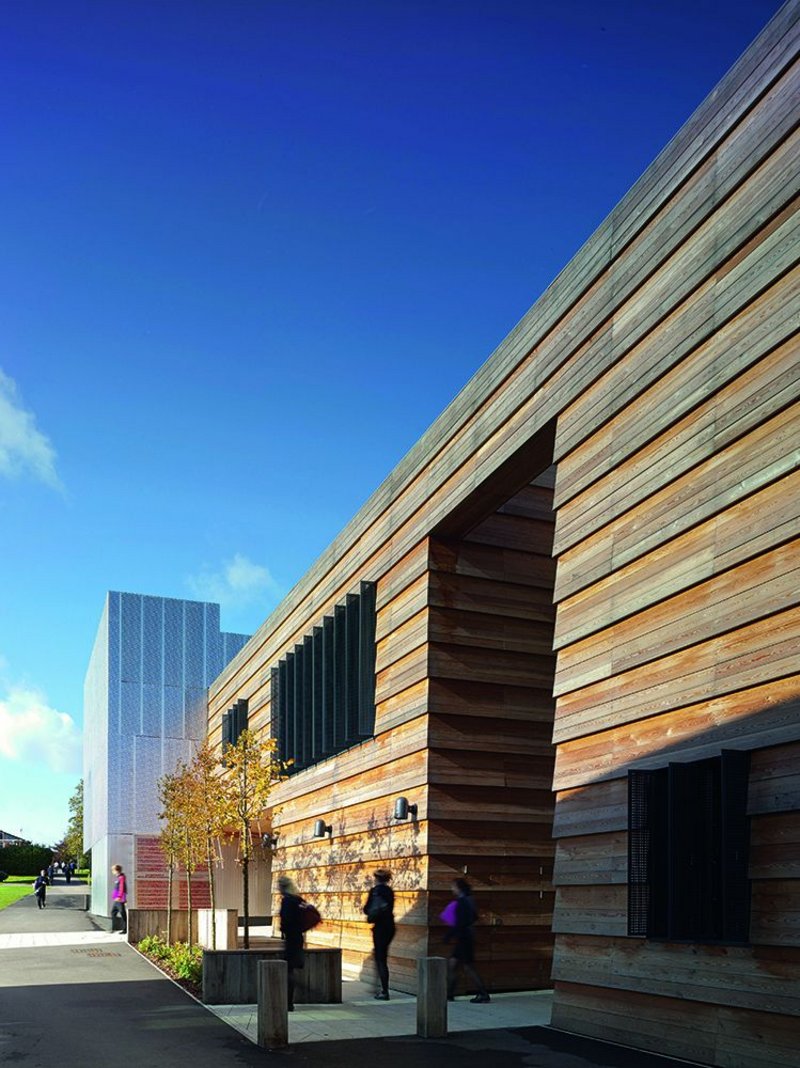 Two volumes, two entrances: both music and ICT are represented in this building, though it goes under a single title.

The school has some experience of new architecture. Across the parade ground from the tower-topped historic Devitt House sits an architectural rival: the Falklands Memorial Chapel from 2000. Designed by Crispin Wride, its carapace is split to reveal an inner layer, inside which sits the elliptical chapel. The sense in the school, which has a nautical tradition, was that this was a successful and ‘striking’ piece of modern design. It is the sort of building the governors and head wanted to align themselves with as a modern boarding school. But the governors were also wary. The new boarding house, which neighbours the chapel, was more problematic in delivery and in operation. The school was left with a feeling of neglect by the large London practice which had designed it.

So when old Pangbournian Rob Mitchell called on the school in 2005 from his small practice in Bath, the door was open. Mitchell Taylor had just completed effectively its first project, a small school extension, and had an easygoing style. Partner Kris Eley has now spent seven years visiting the school, regularly leaving his Wiltshire home on misty mornings and pulling up 60 miles away in sunny Pangbourne. He gestures at his staff badge with bemusement but he is a member of ‘Team Pangbourne’ and Garnier is quite explicit about that. Eley may be visiting to look at defects but he is game for climbing up a ladder to offer advice on a flashings and happy to be asked his opinion about minor alterations. 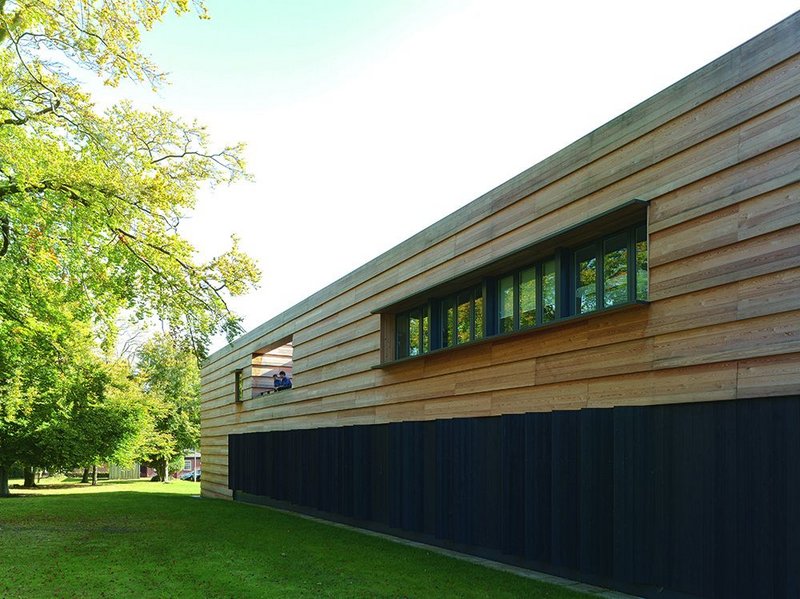 A stretch of timber alongside a grand beech tree is articulated with a terrace and ribbon windows on the top floor and angled baffles to the practice room windows below.

The relationship started with discussions about how to improve music facilities and to engrave that into the image of the school by placing it prominently at its entrance. A recital hall was high on the list and the department wanted plenty of other things; a listening room, dedicated music classrooms and plenty of high spec practice rooms. On the other side of the quad an information and communications technology (ICT) building was planned. The figures that the quantity surveyor came up with for the two buildings were unacceptable to the governors. So what would be? The design came down to some simple maths, the school could afford 800m2. Both music and ICT had to fit into it. Even so, it took a few years to raise the funds. In that time Mitchell Taylor had started working on a new girls’ boarding house to bring more of those girls into the heart of the campus.

The two buildings share a construction rigour and ingenuity. Both have an interesting take on timber boarding. But there the comparisons end. The boarding house is a pleasingly polite brick volume, with just a touch of stylish severity, making the best of modest alterations to an existing planning permission. The Harding Communications Centre is an unexpected image in silver, or silvering, aluminium mesh and larch with a splash of a bright green curtain and dashes of the red breather membrane. It picks up on the grass of the quad – almost too much – but most importantly it gives a potentially stolid volume a sense of life which is deliberately heightened by the full height window of the recital room and the way Mitchell Taylor has carved out the entrances and, on the opposite facade, the first floor terrace. 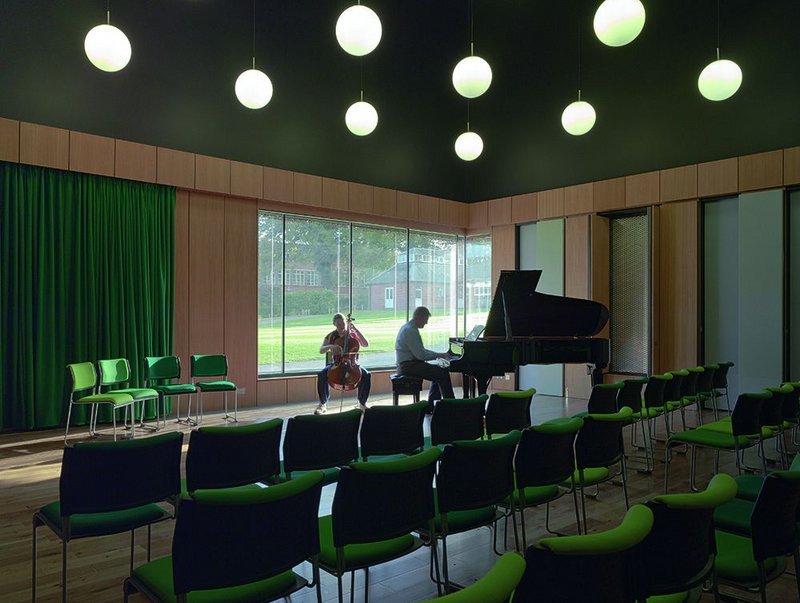 The recital hall with panels open to soften the acoustics. The view to the quad beyond means the musicians don’t have to be cut off from the rest of the life of the school. 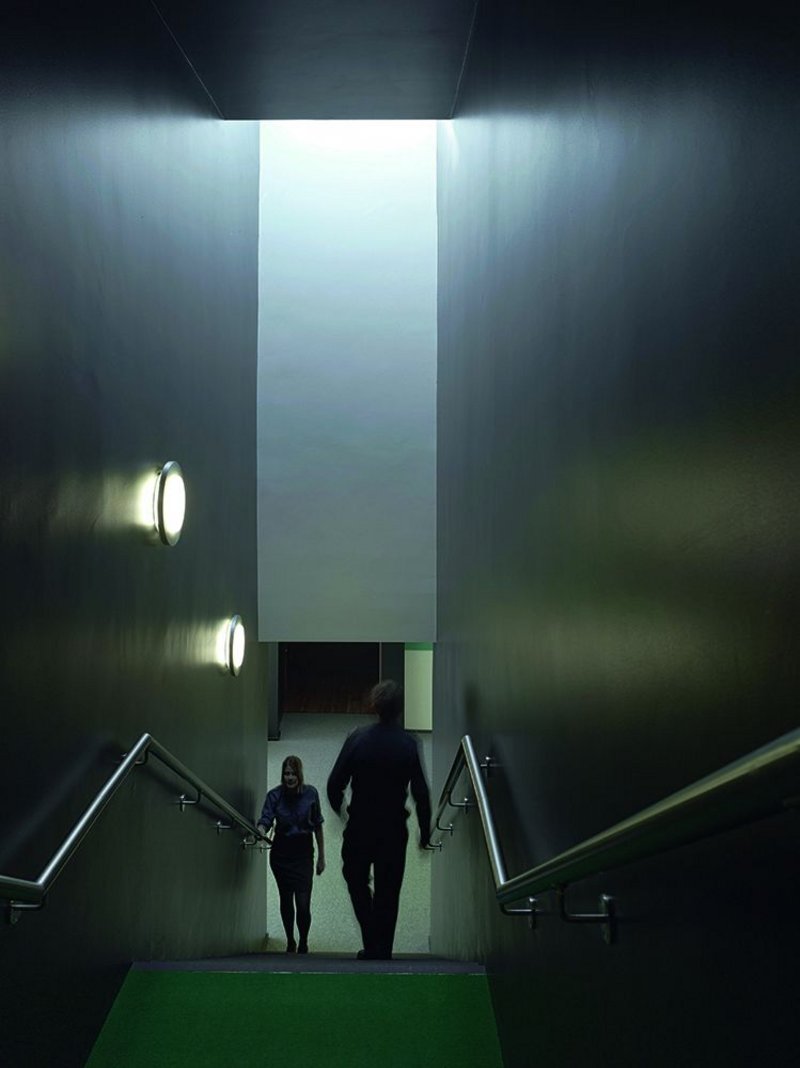 Dark and light in the staircase. Rooflights are used to good, and sometimes dramatic, effect.

‘A rooflight, punching through the upper floor with a twist, gives the small foyer a massively extended sense of space after entering under the cutaway volume’

Eley is quite happy with the combination of music school and ICT: it shifted the volume from a black box performance space with single storey alongside to a more compact form. While the plan of the building is quite ordinary – performance box at one side, double-loaded corridor above – what Eley describes as ‘small moves’ define the exciting sense of the space. The first is a fairly significant rooflight, punching through the upper floor with a twist, giving the small foyer a massively extended sense of space after entering it under the cutaway volume. The same device works dramatically on the black painted main staircase. The kinked geometry plays out on the back wall, with vertical slices of white oiled larch, and runs into the corridors turning them into real spaces rather than routes, with the occasional upright fluorescent tube among them and indents around clusters of doors. 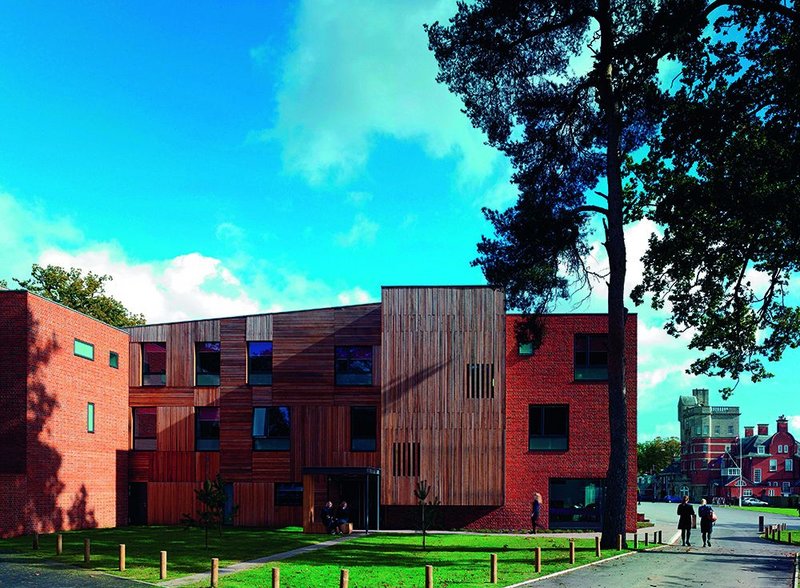 A protruding box houses the main staircase while the simple rooms of the plan are expressed more interestingly externally, with variations in window size.

The mesh-clad recital hall has a presence on the quad, but inside the double doors don’t call attention to themselves. Nor do the ‘tuning’ panels in the wall, the 2.7m high vents nor the pelmet stuffed with services. It is a lofty yet intimate space thanks to the lower level timber-finished lining and the height of the space. It feels pleasantly airy with a small group practising and, I would guess, charged when filled with an 80-strong audience and a Steinway grand piano. Despite other school halls and the memorial chapel this room may have to serve for headmaster briefings as well as for small scale chamber orchestras or orchestra practice. But making an acoustically flexible space is complicated. Or at least it is in many hands. Mitchell Taylor took the advice on absorption surfaces and reverberation from their acousticians and have made a series of opening tuning panels which offer either a hard, reflective, face or open a soft absorbing one to the room, with acoustic panels. A similar device of opening panels is used for ventilation. All can be controlled by those using the room.

Air and sound and a sense of ingenuity run through the building. The practice windows open a little onto the tennis courts and fields beyond. Baffles angled towards them allow just a few notes to escape – a fair exchange for a breathe of sweet air. Wide sills on the windows above obstruct sound waves to give quiet classrooms. Higher still, projections are not south-facing, as you might think, but were more about creating an aesthetic balance. The second staircase, giving ICT its own front door, is deliberately ‘pingy’, a bit of acoustics in practice as Eley had to explain to building control. 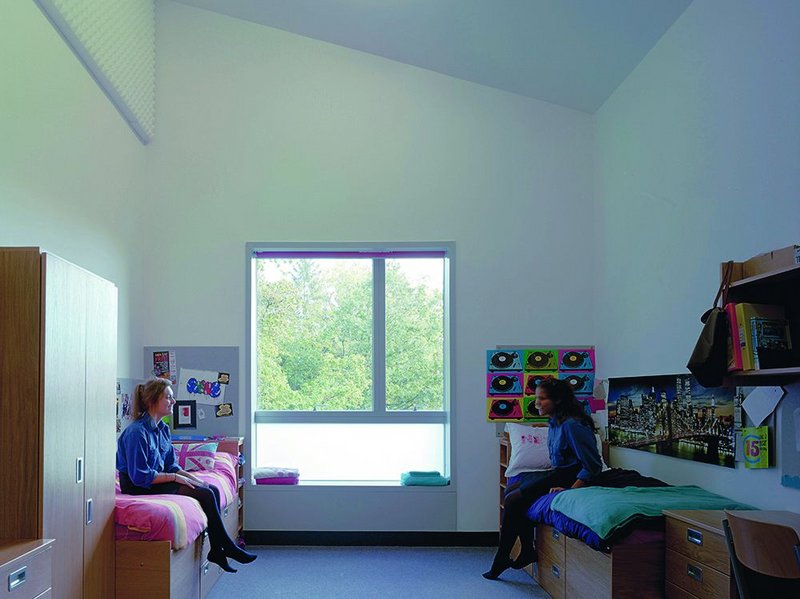 Deep sills to the large windows in the girls’ bedrooms give another space to sit and chat in. 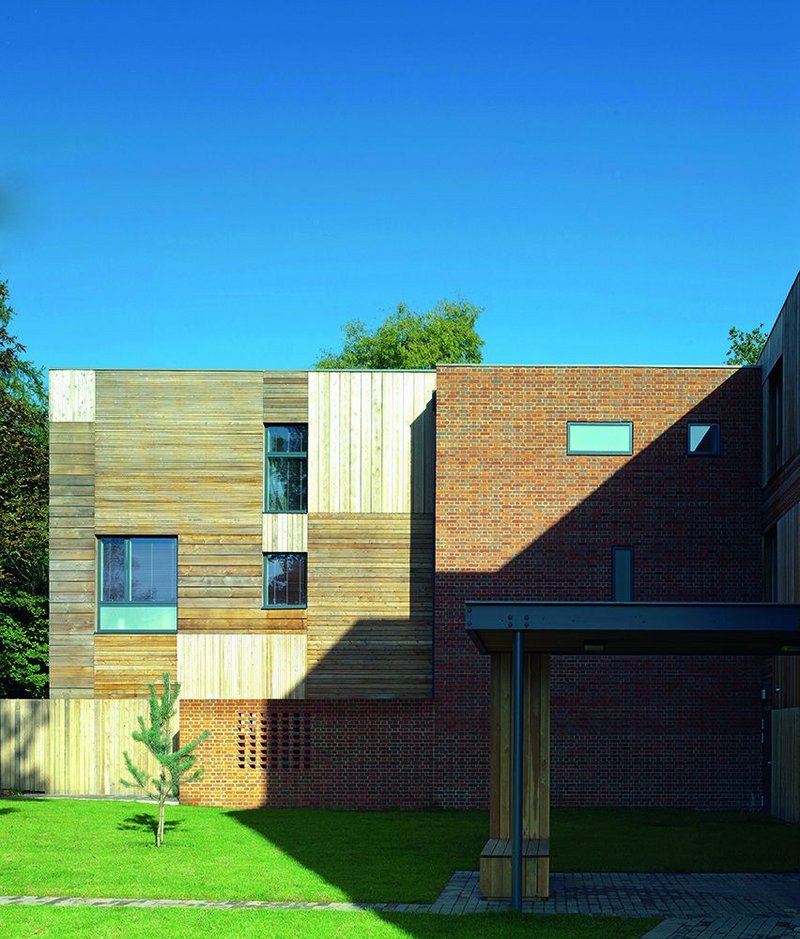 The housemistress’ home is timber clad, its front door given a modicum of privacy by a partially perforated brick wall.

‘The excitement and enthusiasm of pupils has elevated the place of music in the school. “If I could bottle that excitement I would,” says Garnier’

Garnier has seen the building ‘galvanise attitudes towards learning’. For him it has been a revelation. He realised this would not be the building he had imagined when the quantity surveyor first delivered bad news of the cuts. And he admits that he carried that disappointment with him until it opened. But now the experience of the building has swept that away; the quality of sound in the recital room, but more significantly the excitement and enthusiasm of pupils has elevated the place of music in the school. ‘If I could bottle that excitement I would,’ says Garnier. It’s something he hopes Mitchell Taylor can magic up again for the science and technology departments they are now designing.

The boarding house St George had a very different brief, to create a home for the girls and staff living there. It is a very particular sort of home driven by regular musters of the whole house of 60 which obviously requires quite a large common room. The galley (kitchen) and cabin (bedrooms), and the large brass bell at the entrance, refer to the school’s maritime heritage. It was very much informed by the things its rather closed-in neighbour was missing: generous ceiling to ceiling heights, corridor fire doors on automatic closers to open up the hallways, showers that drain quickly, easily and cleanly. Taking advantage of the height of the housemistress’ townhouse, also part of this building, some bedrooms have amazingly high ceilings, rising to 5.5m. 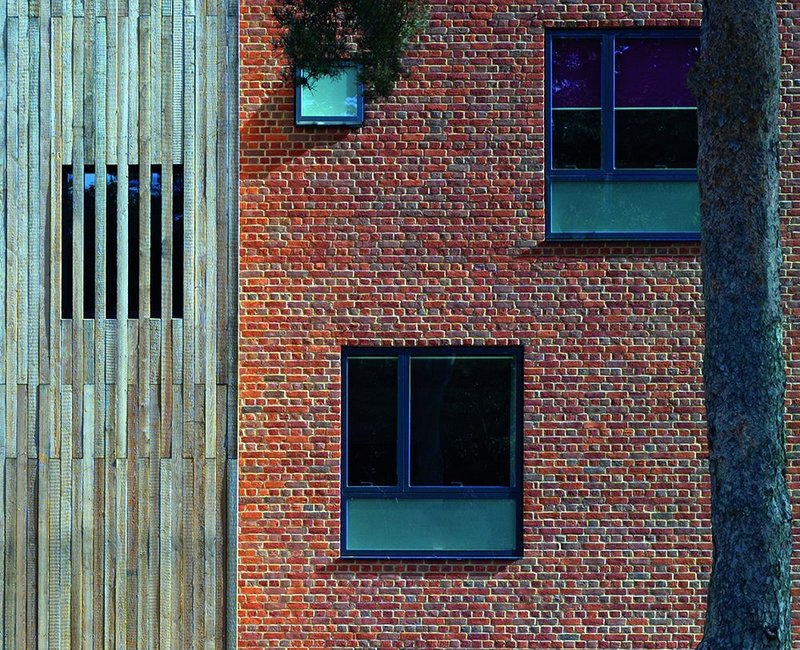 Brick from Swanage has great warmth and texture.

Bringing the girls in from the outer edges of the site has already paid dividends, says Garnier. And the building is a positive addition to its not terribly distinguished structures. The campus still betrays its piecemeal development with a teenage gawkiness – its understated quad and a very open parade ground that cries out for the windswept misery of a rainy day. The brief was never to improve this but perhaps the development of the science and technology departments and the continuing presence of the trusted Mitchell Taylor on site will start to change the sense of the campus, and get it all to start pulling together in a way the headmaster could be proud of. Go team Pangbourne!