Despite traditional Moorish references, Mecanoo and Ayesa’s monolithic Palace of Justice expresses the full force of law to Cordoba 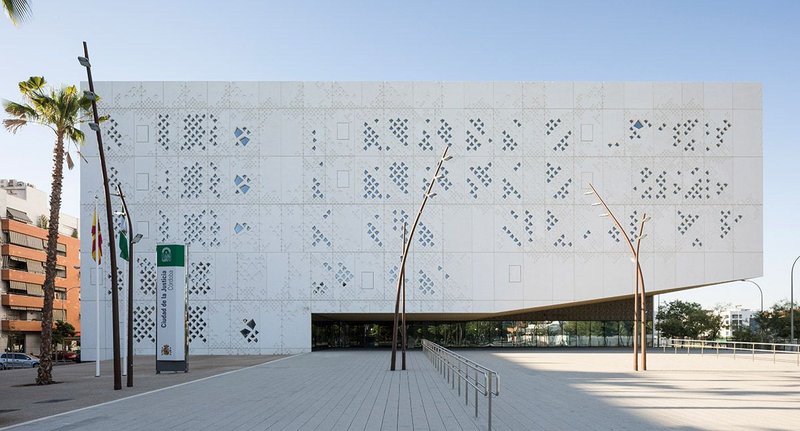 Cordoba’s monolithic Palace of Justice looking south from the new public square to the north elevation, the huge cantilever of its auditorium also denoting the main entrance. Credit: Fernando Alda

During fiesta time in Spain, while some places busy themselves throwing overripe tomatoes at each other, building precarious human pyramids or generally setting things on fire, old Cordoba conducts itself with rare decorum. May sees the city’s private patio courtyards, mostly hidden from public view by wooden doors or iron gates, opened to all, allowing residents enjoyment of their flowers, scents, fountains and painted ceramic walls. The sheer number of patios in evidence here hearkens back to Roman roots,and a domestic urban typology continued by the Moors when, from the 8th century, they set about turning the city into a glorious independent Caliphate on their empire’s western edge. The communal houses built around interior courtyards – the ‘casa-patios’ – were a very Cordoban form, their size predicated on allowing cooling breezes to circulate while keeping out the harsh Andalusian sunshine.

A few hundred years on, and it looks like they’re enjoying a comeback, now part of a much larger civic intervention by Dutch firm Mecanoo and Spanish multidisciplinary practice Ayesa, which in 2006 won an international competition to design the city’s new 48,000m² Palace of Justice in the Parque Figueroa suburb, part of Cordoba’s north west expansion. But the patios loom larger than life here with a design that hews them out of what seems, from the streets around it, a gigantic, monolithic block of white stone.

With varying spatial demands, this building programmatically has the sense of having to function as a small city-state

And just as the wheels of justice turn slow but exceedingly fine, Mecanoo associate partner Nuno Fontarra explains that it took 12 years for the €43 million courthouse project to go from win to completion. Four years of design development preceded the project being ‘locked’ in the 2010 recession, to be resuscitated in 2014 with a new contractor. Three more years has seen courtrooms and administrative offices rise from behind its white GRC diamond-perforated panels. This includes a huge 10m double basement with a legal archive, holding cells, lab and mortuary, interview rooms, plant and parking areas for police and ambulances. With the varying spatial demands for the accused and victim, the prisoner and the free, and those who represent, analyse, judge and incarcerate them – this building programmatically has the sense of having to function as a small city-state. Fontarra is keen to emphasise this complexity but he concedes that over the course of those 11 years, there are aspects to the design where Mecanoo and Ayesa both won and lost their case. 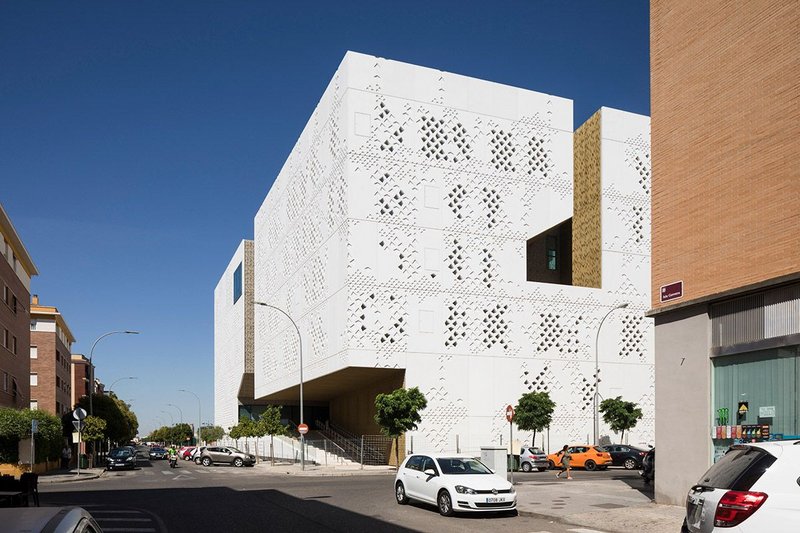 But this is certainly not true, he contends, in the main moves, which would have been the same if the firm was designing it now; like the idea to create a super-dense block that covered two thirds of the site and then carve into it with semi-private courtyards. Or the concept of the big ramp leading from the main entrance at the northern third down to a new public square to connect with the Figueroa gardens beyond – a move that he thinks won it the competition in the first place. But formally, for Mecanoo, it was about creating an expression of solidity, to be in total control of the ingress of light, with walls of tiny geometric openings referencing the city’s Moorish architecture. Internally, as much as possible, it was about having a wide spine of public circulation, from which people would be filtered into increasingly private judiciary spaces. It’s a very bespoke design,’ Fontarra tells me. ‘Specific to this city and its particular civic function.’

This may be so, referencing the city’s past on a conceptual level and perhaps in terms of logistical layout; but I wonder, the new north square excepted, how much it applies to its locality. While the quality of the external walls of cast white GRC only increased in the years the project was on hold, moving from an innovative process to a high quality, standardised one, the result is the same in terms of the elevation; Mecanoo’s desire for a ‘hermetic structure that communicates with the street’ might be wishful thinking.

Yes, the building’s three ramped entrances do allude to a programmatic complexity at play, with the public north entrance demarcated by its huge cantilever and accented elevation. At the south end, access to the family and children’s court and forensic institute goes from pavement level to a small, raised, discrete entrance leading to a hidden patio. At the east, civic registrar and events are reached via ground level, opening out into a full-height, day-lit patio before leading couples into the building proper. While the entrance function might be the same, these amount – along with a more foreboding, Dante-esque slope down on the west side to forensic labs, mortuary and holding cells – to a subtle and rarefied expression of their fundamental difference.

But the desire by the local government to maintain separation from the street, together with Mecanoo and Ayesa’s own disregard of the low quality of the existing suburb, results in an uncompromising, if imposing, facade. Apart from the ramps to the raised internal public spine, the building yields little if anything to the street. This is despite the facade modulation in its 33 GRC panel arrangements and cantilevers into the upper patios (the latter generating repeating anvil-like forms around the building).

And apart from where they denote an entrance, the patios reinforce this. They also fell victim to value engineering and vacillation on the part of the client over the internal configuration of offices. In the days before City Hall finally decided on cellularised offices and the notion that light to feed them could come from elsewhere, the patios were covered in solid painted ceramic, but as the need to provide individual windows manifested, so did the idea of a stainless screen curtain that would homogenise their internal faces. This was value-engineered down to a gold-anodised aluminium lattice that tracks along soffits as well as down walls. With the patios all starting above eye level, the overall effect is of mass and solidity; the intractability of law rather than transparency. Perhaps that’s the look they were going for.

Internally, justice presents itself to the public with a more sympathetic face. The circulation spine that runs north south along the building, unifying in section courtrooms with admin offices, judges chambers, auditorium,  and child courts and the forensics institute in the south blocks, is cut with holes as it rises, deep funnels bringing the play of light and shadow into its white-walled volume. And suddenly the point of the patios becomes clear, acting as spatial dividers between the various blocks of civic, judicial, administrative and institutional functions, pulling light into the social heart of the building. Apart from the basement café patio however, they remain inaccessible to the public; upper level patios only open to office staff and the judiciary.

But, as I said, inaccessibility is an enduring theme here, as programmatically the building is designed to ensure division is maintained between different users. Public galleries to courtrooms might be accessed from the spine but once through the door, a world of separation awaits; public waiting areas for victims and defendents’ families are divided; the accused, brought up by lift from below, are allocated a waiting zone that never crosses the path of either the public or judges, who also share this back of house area. Thus the seriously oak-lined, formal volumes of the courtrooms themselves are cossetted in a labyrinth of serving spaces.

It might promise a Hieronymus Bosch-like ascent to the heavens through a light funnel, but the public will never get further than the auditorium level

Similarly, the children’s court and forensics institute, which will try and identify cases of physical and sexual abuse, have Chinese walls between them and the public spine. The apparent openness of the section is also a conceit; it might promise a Hieronymus Bosch-like ascent to the heavens through a light funnel, but the public will never get further than the auditorium level, its stepped section resulting in the massive steel cantilever of the north entrance. Tucked away in the north west block, its first floor lobby deserves marking with some hanging artwork if there’s ever a budget for it. 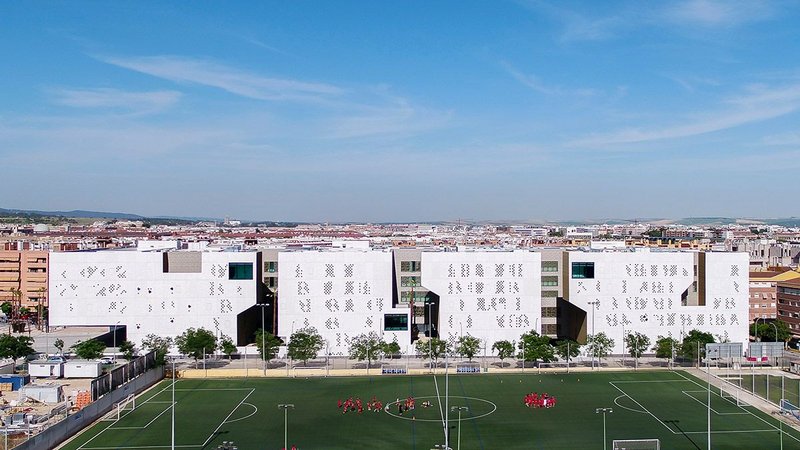 Looking east from a distance, the city-block scale of the Palace of Justice is plainly evident. Credit: Adriaan van Dam

Wandering around looking at the general high level of cladding quality and internal finish I have to pinch myself to recall that the whole lot was procured for barely €1,000/m² build cost. Everything’s cheaper in southern Spain muses Fontara; not just fags and beer, but the architect’s fee, no extra consultants and sub-contractor ‘copycat’ approaches to almost everything that’s specified. There’s no expensive facade access systems on this behemoth – it’s a cherry picker, two men and few sweaty afternoons.

Similarly, in an interesting contractual quirk, at pre-tender stage, Mecanoo and Ayesa specified the most expensive toilet pans they could – stainless steel throughout – with a view to downgrading them to ceramic as costs were cut. But with the contractor later tied in to a fixed price contract, he could only increase, not downgrade the spec. So it transpires that in their rather handsome, spacious, public and office bathrooms, the same, robust, impact resistant high-grade steel pans were installed in cubicles as those on display beyond the steel bars in the prisoner holding cells.

Fontarra seems embarrassed by this oversight; I see it as an aspirational reminder that all should be subject to democratic justice. Oliver Twist’s pompous Mr Beadle would feel vindicated; in this detail at least, the law really is an ass.