The style argument about modern versus traditional architecture, when it comes to building new homes in the countryside, is scarcely an issue. This is the great divide in architecture: with certain exceptions, cities are modernist, while rural England is traditionalist. Some town-and-country architects run separate offices for the two conditions, as Will Alsop used to do. In swathes of the countryside, particularly near historic villages and market towns, you might make some headway with one-off homes in the Grand Designs manner, or even multiple-house developments in the HAB-style modern-vernacular vein, but a whole housing estate of more than 50 houses? Chances are the planners will feel deeply uneasy with anything that they don’t deem to be somehow stylistically contextual: and so, most likely, will be the local residents. In which case, better for everyone that your trad development is from the hand of a good architect rather than the half-baked offerings of the mass housebuilders. Here is an excellent example. Down in Somerset, Robert Adam is building a sizeable extension to the village of Norton St Philip. This is a very accomplished piece of work that shows a keen understanding of the way real villages are organised. Pastiche historicism? Certainly, as is most modernist architecture in one way or another. 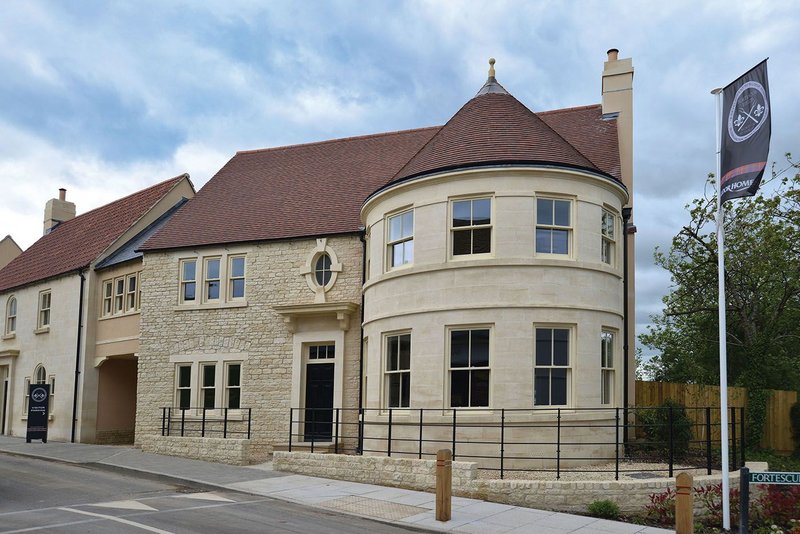 Entrance building to the village extension – originally earmarked for offices, it will now become residential.

Suburbs have their advantages, and their champions. But think of everything you hate about suburban sprawl – the wastefully low density, needless loss of green fields, overscaled road systems of the highway engineers, the repeated banal freestanding house types, ‘gated communities’, lack of communal facilities – and there is not much of that downside here. Built on the site of a former chicken-processing plant – so brownfield land, with caveats for later phases – Adam is making a tightly-packed new village quarter of 57 homes which is so close to the original village as to be part of it. It is set out along a remarkably narrow loop of a main street (representing a victory over standard highways practice), with a couple of spur roads leading off it. There are blind corners, and once construction is complete it will be a shared surface between vehicles and pedestrians. The stems of street lamps were going in the day I visited but they may come out: the mother village does not have street lighting, argues the parish, so why should the new addition? Public footpaths pass through it and out into the countryside via a managed common.

Every house is individual – no standard-type repetition. Where there are garages, there are habitable rooms over them. Some houses are small, many are large, one is absolutely huge. There are two small apartment buildings, plus an extravagantly large apartment above the ‘market hall’ building. There are 14 sheltered homes for the elderly and eight ‘affordable’ ones for the younger. It has an operational new village store and post office (things that had previously closed in the village), and a covered attached rotunda of a gathering-place. No need for a pub or church, as these are supplied by the old village hard by. Materials for walls and roofs vary (slate, various tiles and stone being used for roofs), and much use is made of the local Limpley Stoke quarry for random coursing, ashlar and carved components such as porches, architraves and columns. There is no brick (it’s a stone area), a lot of render and a very limited amount of timber cladding – just enough to provide some contrast – but Adam says he draws the line at half-timbering. Although he clearly takes architectural cues from buildings in the mother village, he does not reference the 15th century, grade I listed timber-framed coaching inn there, the George.

The new development is slowly being occupied now, the streets and turn-offs are muddy with contractors’ vehicles building the outer sections, but as a planned development enough already exists for it to feel like a real place. A walk around it is very enjoyable, not least because of the varied topography – it’s a site with some steep slopes and good outward views– but also because you can detect a personality behind it. It’s by no means a work of whimsical bricolage like Clough Williams-Ellis’s Portmeirion, but it has its eccentricities, its little jeux d’esprits. The sense that an architect is having a bit of fun. Most of the houses are conjoined, for instance, but one – a tall three-storey one following the curve of the street– just ends abruptly like a cliff, for instance. Another is expressed as a bullnosed stone house at a tight turn in the street. There is quite a variety of stone porch canopies and window bays. Adam mixes it up, but as he says, what exercises people is eternal. ‘All the fuss is about the house’s front wall of about five metres by four metres by 450mm thick, with a door in it: everything else is pretty much the same everywhere. ‘ If that’s facadism, well, houses have facades. But Adam is also, up to a point, a form-follows-function man: like every architect, while complimenting the builders, he gets vexed at changes they make. Here they are meant to build the houses exactly as designed but they still tweak things internally which, he frets, sometimes mean that rooms end up with inappropriate windows.

I am shown round the site by Adam’s son Jamie, who turns out to be his father’s client. The younger Adam works for a medium-sized property development company, Lochailort Investments, that specialises in finding such sites and engaging traditionalist architects. Jamie Adam is adamant that he would never have been an architect (‘I can’t draw’, he admits cheerfully) and this project pre-dates his joining Lochailort from estate agency Jackson-Stops in York. But he’s the project director and I notice he frets about details as much as his dad. Lochailort has developed a section of the project directly itself, and partnered with Bloor Homes for the rest. In particular, the entrance run of ‘civic’ buildings – small supermarket, ‘market hall’ and a pair of commercial buildings – have been done to a costlier specification, especially the stonework. The market hall with its solid Doric and ionic columns and stone roof cost around £1m to build.

Not everything pans out as hoped. Nice though the idea was to have some offices on site to provide employment, they’re not shifting so those buildings will convert to housing, as they were designed to do if needed. The shop is subsidised by being rent-free at first but will need full occupancy of the estate to succeed commercially. And that ‘market hall’ building is really just a large retail unit, suitable for an antique shop, with its apartment over.

So of course this place is not ‘real’ in the sense of being a community of agricultural workers and squirearchy. Like most old villages round here, this is Olde England with Range Rovers attached. Norton St Philip is already a dormitory village on the road to Bath, and these new houses are upmarket, asking prices ranging from £300,000 for a small apartment to £1.6m for the huge house which acts aesthetically as a village inn. Most are in the £500,000-£800,000 range. But  property values around Bath are what pay for the quality of materials and craftsmanship here, though there’s nothing medieval about it: these are conventional blockwork cavity-construction houses with varying outer skins.

Two more phases are in for appeal, which although part of the former chicken factory site are nonetheless fields. Part of the plan for one of those is to make off-road parking for some of the existing old village residents, who suffer from the rat-run nature of the main street. Other street improvements in the village such as new stone paving have been funded by the developers.

I’m convinced by Adam’s Norton St Philip, having walked round it. It’s intelligently planned and designed with panache. Some of our readers may have their doubts, but think: what would the volume house builders do with such a site? Architecture, and architecture-minded developers, win here.