With its sloping terracotta and colonnades, Ash Court puts a modern twist on Girton College’s stripped down Victorian context 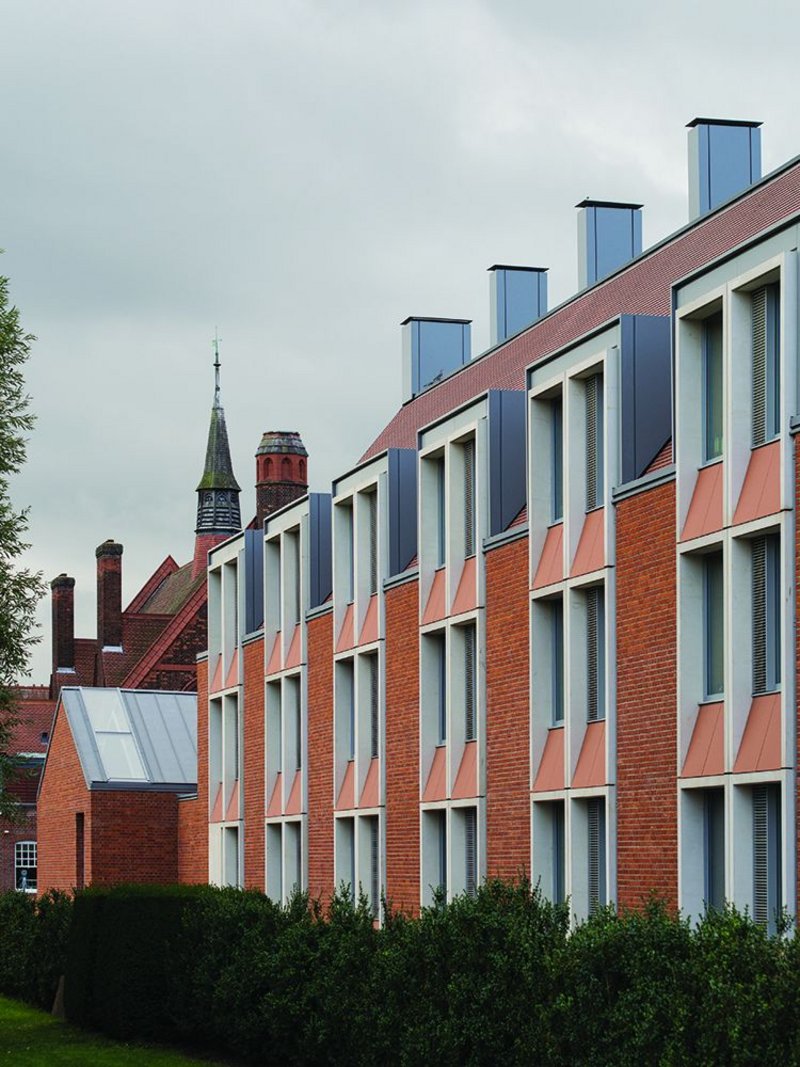 An elegant rhythm is set by the expression of the north east facing paired windows. Beyond is the low roof of the recast swimming pool and the back of the college’s dining hall.

Allies and Morrison’s Ash Court is in the back yard of Girton College, Cambridge. The front entrance is Alfred Waterhouse, a stripped down version of high Victorian for what was originally a ladies’ college. Designed by three generations of Waterhouses, the college is set around courts, each lined with corridors, cloister style, with library, bedrooms and halls leading off.

Allies and Morrison has added Ash Court to its 2005 archive and library extension at Girton. Ash Court’s 50 study bedrooms are built on the edge of the college’s envelope of green belt exemption and in the context of the college’s grade II* listing. They tidy up the service yard and address the college garden and fields beyond.

Looking out of the college the scale is grand, with bedroom windows paired and projecting, emphasised by the stone frames, zinc dormers and slabs of terracotta sloping out as oversized sills. It is a comfortable, handsome composition with the steeply pitched roof that echoes the 52.5 degrees incline of the older buildings.

On the inside the court retains the sense of a muddle of infills. Projecting student kitchens (gyps in college parlance) are compared by project architect, Max Kettenacker, to the Victorian ablution blocks opposite, but they are rather scrappy with little windows, brise soleils and white panels. This side also includes a faceted, twisting, lift tower (rather nice) and a single storey gym (which feels like it is in the wrong place). They, and an existing squash court, are tied together loosely by a covered colonnaded walkway. 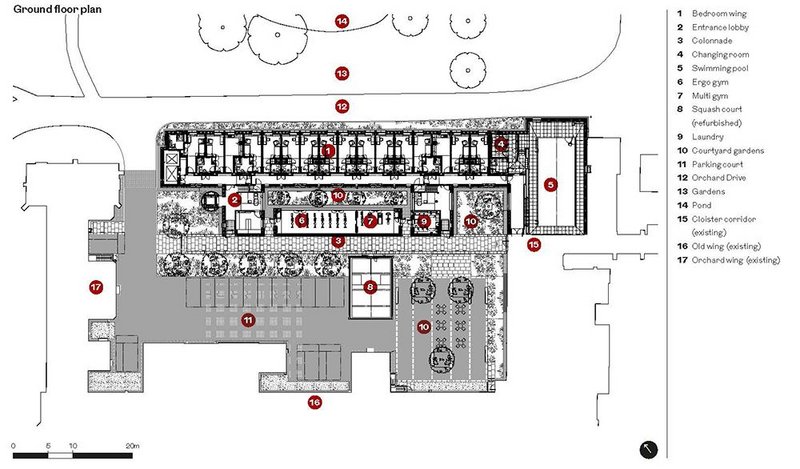 Given that it runs parallel to the accommodation corridor only a few meters away the walkway doesn’t seem strictly necessary on a practical level. But Allies and Morrison felt strongly that the axis of brick vaulted Cloister Corridor – which runs past the heart of the college, the dining hall – should be continued, also linking the furthest wing to the rest of the college and defining the edge of the court. As a piece, this has an enjoy­able rhythm, columns and timber slats on the under­side soffit. And it gives the sense of continuing the line of rather lovely, simple single loaded corridors that run around the college.

Inside Ash Court the staircases and bedroom corridors also take their cues from these spaces, with white panels offering a more civilised face to the concrete soffit and a window seat by each paired door inviting sociability. Concrete staircases are nicked into the structure for efficiency (the contractor was less keen, says Kettenacker). Neatly planned, well shelved rooms are monitored for temperature and CO2 – when the vents are left open, and CO2 levels are reasonable, the heating will turn off. A great incentive to remember to shut your vent before going out. The whole building is designed to Passive­haus standards, though there was no appetite to certify beyond BREEAM Excellent.

One of the hungriest parts of the design is the swimming pool which draws on the heat pumps. Built on the same foundations as the existing pool, it shares a style of much loved historic steel trusses in the building. It makes the back of this college truly worth exploring. 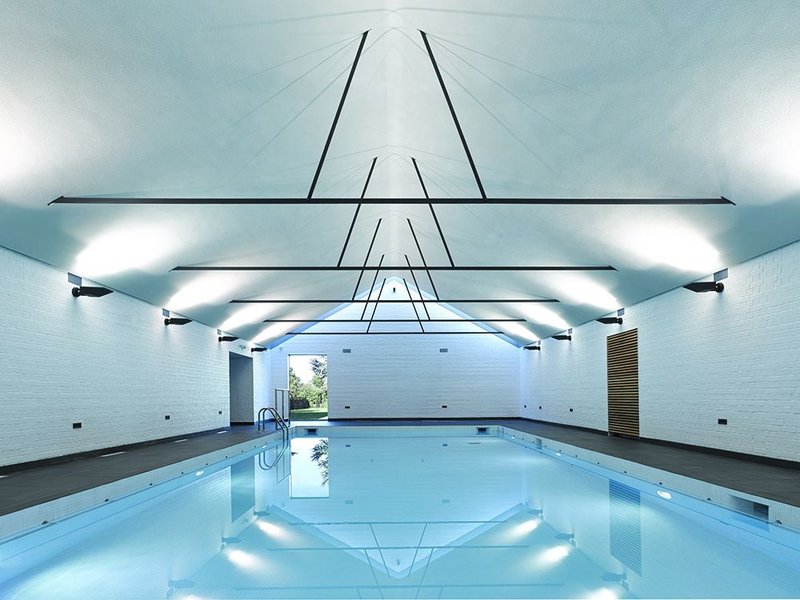 The foundations and basin of the Victorian pool were reused but from the water level up it was rebuilt – with just steel trusses as a reminder of the best of it. 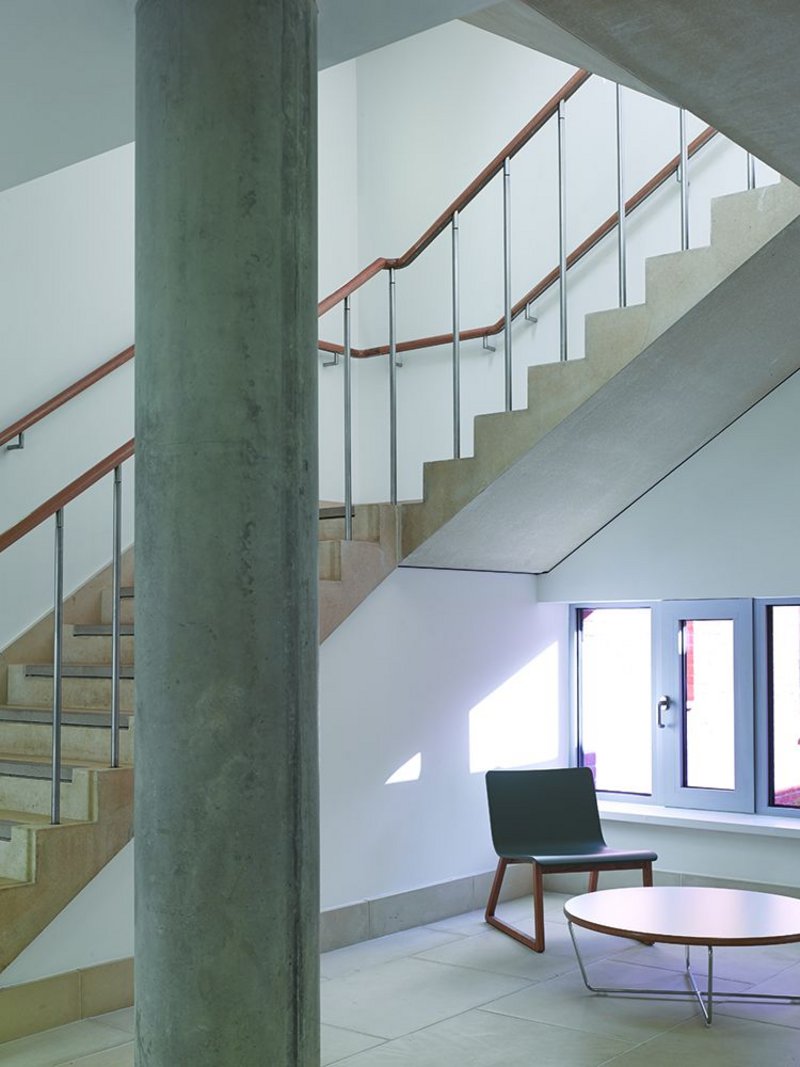 The staircases are economical in their structure and simple in their finishes.