For a moment, Mohammad Reza Farbood's photograph of the dazzling mirrored prayer hall distracts you from what the people below are engaged in 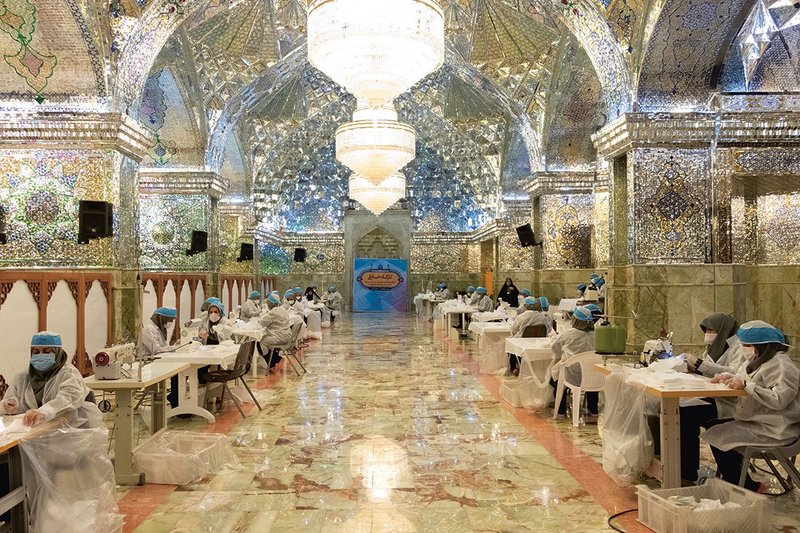 Four months after the first case of coronavirus was identified in China’s Hubei province, the UK went into lockdown on 23 March 2020. By the time this issue went to press a month later, the virus had infected over 2 million people globally and killed more than 145,000 in Europe – 10% of that figure in the UK alone. The ongoing social distancing drive, which saw the economy almost grind to a halt and the government spend billions furloughing a sizeable proportion of Britain’s workforce, has given everyone isolated at home plenty of time to pause and reflect.

Scenes of deserted cities across Europe are now familiar, and in the Middle East, things have followed a similar trajectory. Iran is the epicentre of the outbreak there, which originated in the pilgrimage city of Qom and, by mid-April, had resulted in 78,000 infections and nearly 5,000 deaths. In the attempt to stymie Covid-19, even mosques have been conscripted to help make surgical masks, produced perhaps with an intrinsic sanctity; noted and tweeted by associate professor of art history at the University of Massachusetts, Iranian Pamela Karimi.

For her, this FarsNews image of the Shi’ite Shah Cheragh mosque in Shiraz has special resonance. Her grandmother lived near the 14th century shrine, praying there daily; Karimi remembers her own childhood visits to its 19th century mirrored, kaleidoscopic prayer hall in starry-eyed wonderment.

It is usually considered good form, she tells me, to avoid praying near mirrors – maybe to foil human pride and vanity. But here at Shah Cheragh, the rule appears to be turned on its head. Atomised into a million shards, the agglomeration of reflections seems to cancel itself out, as if the pilgrim is invited not to stare at the looking glass, but through it; to no longer reflect on the venal body but see past it, on to the soul itself.