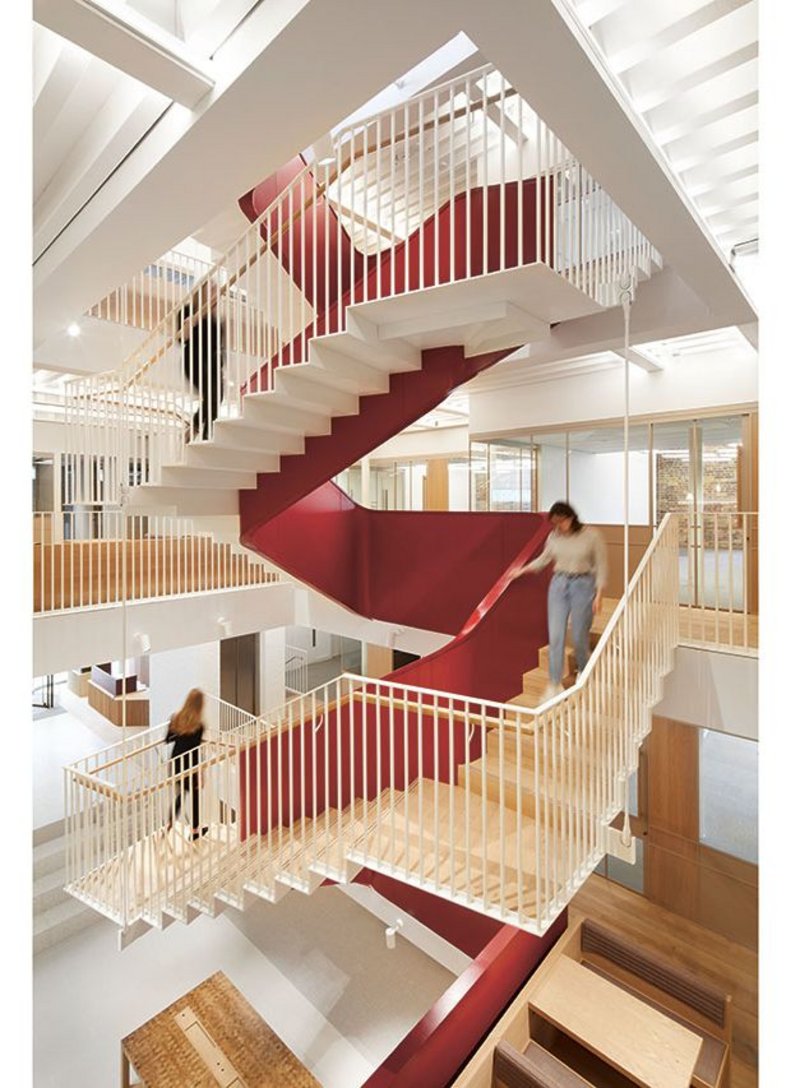 ‘One of key things Fora is keen on is that you notice the quality of hospitality through the little details and points of contact you have with the building,’ says Pete Jennings, director at architect Piercy&Company. He’s talking about the co-workspace provider’s latest venture in Princelet Street, just off London’s Brick Lane, where the practice has transformed two adjoining Victorian warehouses into 2,100m2 of contemporary workspace.

In a crowded market, Fora’s USP is providing a members’ club feel and a business hotel vibe. Accordingly, Piercy&Company’s refined design for Princelet Street eschews the brash industrial characteristics common to many co-workspaces for a calm, disciplined interior where the focus is on craftsmanship, clean lines and functionality.

When the practice first became involved with the scheme, the space had just been vacated by a tech start-up. ‘The bones of the space were great but there was no connection between the floors and very little natural light,’ explains Jennings.

Under a comprehensive refurbishment Piercy&Company has added a floor at the top of the building, opened up the basement, provided a new glazed entrance and exposed the structure of cast iron columns, beams and timber joists. The most striking intervention, however, is a new sculptural staircase. This winds up through the heart of the building like a giant twisting red ribbon, linking the ground floor reception to the new top floor, creating a focal point for the office floors while enabling daylight to penetrate deep into the core.

To accommodate the new stair a void had to be punched through the floor plates. The staircase is part cantilevered, part suspended from the existing structure; the folded steel treads cantilever out from the red ribbon-like inner structure while the outer edge of the stair is suspended on rods from the structure above.

The ribbon-like element is made of a series of steel posts and plates. This steel structure is concealed behind sheets of MDF which are encased in aluminium with a vibrant red powder-coated finish. It is an effective solution; the overall impression is one of a single twisted sash of bright red steel.

A red timber handrail mimics the twists and turns of the ribbon. ‘The handrail was quite a tricky three-dimensional detail to create,’ says Jennings. To ensure its precise fit, after the staircase was installed it was laser scanned and the coordinates used to guide a CNC machine in carving the wooden handrail sections. By contrast, the geometry of the handrail on the opposite side of the stair is relatively conventional. It is attached to a series of regularly spaced, vertical white metal balusters.

Arranged around the staircase are informal, communal spaces incorporating booths designed by Piercy&Company and manufactured in oak by Realm Joinery. The booth’s banquette seating features fine rib detail that picks up on the rhythm of the stair balusters and the white-painted joists supporting the floors above. ‘The roughness of the existing building is tempered by the refinement and elegance of the new joinery,’ says Jennings.

Oak has also been used for the wooden floors of the communal spaces. The difference here is that the timber is unpolished ‘so that it felt like it was at home in a warehouse environment’. Alongside the bespoke timber furniture, the architect has also worked with Darwin Terracotta to create a bespoke Belfast sink for the washrooms.

Three floors of workspaces are arranged around the central stair and communal spaces. These areas are designed to be used intensively with an occupation density as high as one person every 5m2. Services for workspaces are also arranged in a  ring around the stair void: electrics and data are distributed beneath a raised access floor, while heating and cooling pipework along with fresh air supply ductwork serve fan coil units concealed above a mesh suspended ceiling. ‘The spaces are designed to be pretty densely occupied so the heating, cooling and fresh air loads are significant,’ says Jennings.

The additional storey is a large, light-filled space for socialising and events. Tests showed that existing cast iron columns and foundations were capable of carrying the loads of the extra floor with minimal strengthening. Nevertheless, to keep weight down the additional structure is steel; it incorporates two lightweight, pitched Vierendeel trusses, which span the full width of the building to provide a column-free top floor. North-facing glazing has been inserted between the top and bottom cords of the truss for maximum daylight with minimal solar gain.

The roof’s form ensures that the new storey cannot be seen from the street. This was important because the scheme sits within the Fournier Street Conservation Area and the planners had made clear that they already considered the building to be quite large for the area. ‘The idea was to create a folded roof that reduced at the perimeter of the site but that created a really grand space that can be used either for gatherings or for office space,’ Jennings says.

Jennings is pleased with the final result: ‘It is lovely to be able to design a space on this scale – from the concrete to the cutlery.’