Making an imaginative playground for a children’s hospice in Kuwait was a voyage of discovery, says Ian Crockford 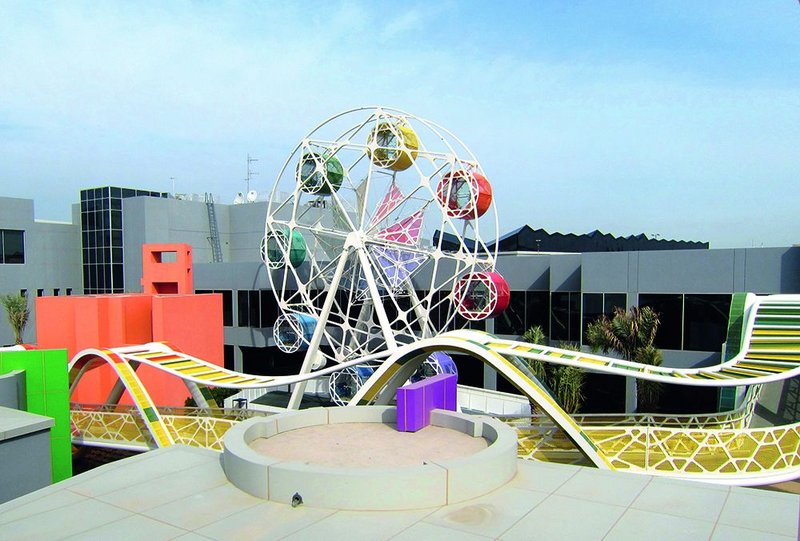 Among the stories of bigger, better, more dramatic commercial buildings peppering the Gulf states is one very different tale, a project centred on individuals and designed with care in mind. This is Bayt Abdullah Children’s Hospice in Kuwait, the first in the region entirely dedicated to the care of children. Three large playground structures dominate the scheme, the brain-child of a group of hospital volunteers led by Margaret Al-Sayer.

The hospice is named after four year old Abdullah, whose courage and determination, in the face of his ultimately fatal illness, inspired the group to act. Margaret and her team, convinced that the environment makes a significant difference to children’s response to treatment and to their quality of life, set about fund raising and commissioning a totally new kind of centre for the children’s long-term care.

The preliminary concept for the hospice buildings, playground and external play structures was initially drawn up by a young Kuwaiti architectural student, Alia Al-Ghunaim. The client approached Gulf Consult (Kuwait) to design the buildings, working with US interior health specialist Architects NBBJ. In 2009 Marks Barfield Architects was asked to design the special play structures, when the buildings were a third complete on site. Jane Wernick helped with the engineering aspects, and Quantem Consulting with costs.

The three structures are integral to the palliative care philosophy of the hospice. They consist of a kaleidoscopic observation wheel, a magic carpet and a walkway which leads above the rooftops, culminating in an observation platform overlooking a flamingo feeding ground, a nature reserve and the Arabian Gulf. The structures are there to raise the children’s spirits, to engage their sense of adventure while being friendly, fun, exciting and – importantly – accessible to both mobile and wheelchair-dependent patients and their careers.

Planning permissions were in place when MBA was brought on board. The team started by investigating a wide range of design and structural options before agreeing a design direction with the client. The Kaleidoscope Wheel is the focal point of the hospice.

Working in Kuwait has been a lasting and positive experience.  We were lucky to be engaged by a hugely committed client who had initiated the idea of the Bayt Abdullah project 20 years ago. MBA became involved very much at the end of this process, following the construction of the main hospital, so the delivery of the play sculptures were seen by all as the end point of the whole Bayt Abdullah programme because nothing was to become operational without the play sculptures.

This was a very special project. It was a hugely noble cause with a committed team of people who had been involved in its evolution over many years. Their sense of excitement and anticipation was palpable at each meeting or teleconference as the design came to life. There was also of course the nature of the project itself: what has been delivered is a complete one-off, full of wondrous complexity and colour and geometry so like the client we were also on an interesting journey of discovery ourselves.

The practical experience of working in the Gulf regions – the distance, long hours on an aeroplane, the culture and climate – was also positive. In Kuwait, as in most Gulf states, good formal English is spoken and we were soon on first name terms with the Bayt team – many of whom had worked in Europe or the US. Also we were lucky in that many of the client team members had come through the main hospital build so were quite experienced when it came to the nitty gritty of delivery and could respond quickly when decisions had to be taken.

The main challenge from a professional standpoint was the local perception of quality. Some elements of the permanent structure, the lift shaft, the bases and ramps etc were implemented using a local main contractor and early examples of the finished work was not of an acceptable standard. But this was caught early and quickly resolved so subsequent works were finished accordingly, and the setting out was millimetre perfect.

We were also managing a project where the main bulk of the elements were being procured overseas. We designed the structures to be prefabricated to reduce the programme risks and ensure that the quality we wanted could be achieved. This led to usual concerns of long distance delivery etc, but one thing that we hadn’t understood fully was the impact of the religious holidays. We had assumed that some parts of the Kuwaiti state would be working during these periods but, unlike the UK, the entire country shuts down on religious days. This led to a very nervous time before handover when key elements of the sculptures were sat in containers on the docks during the Ede festival. Again the strength of our local team ensured no serious programme implications occurred. However, it was a useful reminder of the cultural differences and mistaken assumptions you can make from a distance.

The project was handed over successfully February of 2012 and was opened by the Amir of Kuwait in March, a fitting full stop to a challenging but ultimately rewarding experience.