There are no new exciting ideas or big surprises in the Housing White Paper, but a change of direction can be discerned with some careful sifting

Housing policy is nothing if not highly political. It touches every aspect of life. We even tag distant ancestors with their housing – Cave Man. Scan Maslow’s hierarchy and housing is pertinent to each level of human need. From basic needs to self-fulfilment, housing plays a role. Security, health, welfare, education, investment, social status, contentment, each is affected by where we live and what we live in.

Housing has to be political. Its rise up the agenda should be welcomed.

But the increasing politicisation of housing is also problematic in a world that seems increasingly defined by goldfish-like attention spans. Political fads and their fixes are ephemeral, and housing is very permanent.

You needn’t be a cynic to sense when Chancellor George Osborne’s redefinition of ‘housing crisis’ as ‘a crisis of homeownership’ was informed, at least in part, by 2015 research suggesting that home owners were twice as likely to vote Conservative as Labour.

The result is there are more housing initiatives than a mad man can shake a stick at, or a sane man can sensibly recall. Into this confusion comes the Housing White Paper.

Judging the book by its cover, the task set was: ‘Fixing our broken housing market.’

That’s a huge task given the power of the firehose spouting data of its failings: from lacklustre building rates to young adults blocked from home ownership, from a boom in boomerang kids, to the old and disabled living in unsuitable sub-standard housing. That’s aside from the rising tide of homelessness and anger over foreign investors leaving prime residential empty.

But for all its complexity, at its heart the answer to the housing policy challenge lies in achieving two things – having an appropriate stock and distributing it satisfactorily. All the rest is a means to those ends.

What is appropriate and what is satisfactory are, of course, determined by political, social and economic norms.

In the mesmerising spin of the political whirligig this simplicity and clarity is easily lost in the race for cheaply-won applause for quick-fix answers to immediate questions, rather than long-term solutions to intractable problems. Symptoms alleviated, perhaps; causes left untreated. 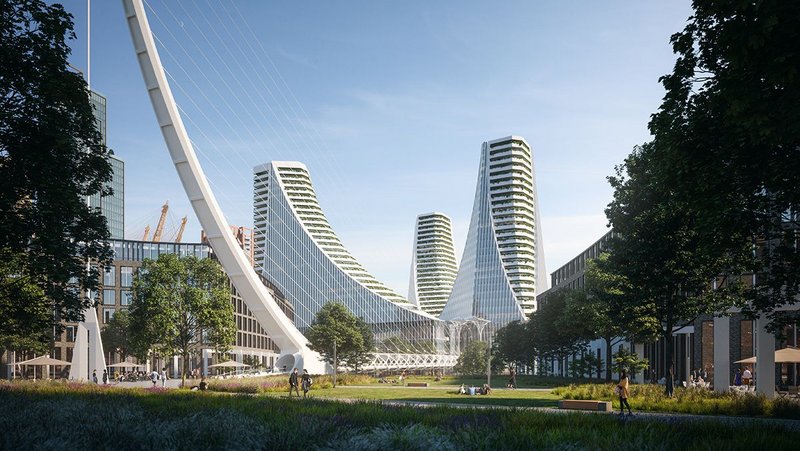 Density on brownfield land at Greenwich Peninsula with Santiago Calatrava's £1bn mixed use topped by apartments.

Encouragingly, the White Paper was remarkably empty of smarty-pants policies to tackle narrow immediate high-profile political problems. The fingerprints of HM Treasury or No10 advisors were far less visible than has been the trend. The control behind the policy seems to have been recaptured from the Treasury and well-rooted once again in the Department for Communities & Local Government and its more intimate connections with the industry, local authorities and its wider group of ‘stakeholders’.

For all that, the document has been welcomed with what sounds like one-handed claps from much of the industry and criticism from those not obliged to be polite.

It looks flimsy, despite the significant repetition obscuring the kernels within. Detail is limited. Devoid of any ‘big ideas’, it might easily be dismissed as ‘feeble’. That was the word chosen by John Healey, Labour’s opposition spokesperson, which will be picked up by much of the commentariat.

However, its effect could prove more profound than it may appear, less because of what it is than what it isn’t – a shopping list of detailed wheezes dressed up as a policy prescription offering a ‘radical and unashamedly ambitious’ solution. It is a statement that appears, politically at least, to reset the government direction on housing policy to a bearing that – compared to what it displaces – is more likely to meet the key aims of providing an appropriate stock that is distributed satisfactorily.

While it is unlikely to be applauded as a success, since it is not how fast you paddle but the course you take than matters, it is a step (or perhaps a stroke) in the right direction.

The opening lines from communities secretary Sajid Javid, as he introduced the White Paper in the House of Commons, recognised there was no magic bullet but stressed that the aim should be to build the right houses in the right places.

All politically uninteresting. All seemingly obvious. Nothing vaguely matched the pre-release hyperbole.

What! No quick fixes? No shiny baubles to toss to the media for endless analysis of the implications?

His selling point, if that is what it was, appeared to be a more collegiate approach. We discovered this (or at least I think I did) only when he responded to Healey’s criticism that the document was ‘feeble’. Javid accused Healey of playing party politics when a cross-party solution was on offer.

With such emphasis on consultation, the document itself seems in some ways to be a hybrid of a Green and a White Paper. But within the minced meat of the document, while detail is slight, there are important signposts to where the government is heading.

There is the well-trailed shift from an emphasis on home ownership to a more tenure-neutral approach, with renting placed centre stage for attention. Starter homes have been kicked as far into the bushes as was politically possible, with stress placed on higher-density development and more use of brownfield land, plus more active use of compulsory purchase to free stalled sites. There’s also a push for more diversity among those building homes – more input from smaller builders, housing associations and custom builders. A new methodology for determining housing need plus support for offsite construction and help with skills shortages sit alongside encouragement for area-wide design codes and the imposition of a statutory duty to meet the needs of older and disabled people.

For the housing cognoscenti there was also a pledge to make land ownership and interests more transparent. That may seem incidental, but it may prove a powerful tool in improving future policy.

There were many more ingredients, though the recipe seems anything other than exotic. But the pie is still to be cooked. The results remain uncertain. There is little detail on how the aspirations will be met and no grand overarching vision.

But there are hints that we may be heading back on the dull path of evidence-based policy rather than what often appeared to be post-policy-prepared ‘evidence’. This dullness is in many ways encouraging.

It would be wrong to dismiss the potential for change latent within the document. And if the aspirations are pursued with vigour the change could be significant.

By way of example let’s take two small not greatly discussed elements: the greater emphasis placed on increased density and using brownfield land. These had pretty much disappeared off the political radar. One sign of this is that many house builders had stopped recording in their annual accounts the proportion of homes built on brown land.

In the early 2000s housing density increased, as did the use of brownfield land, particularly following the March 2000 version of PPG3 (planning guidance). The more recent trend has been towards less dense development and a greater proportion of homes built on green land. The chart shows these trends clearly. Indeed, the post-recession slump in brownfield land and density is, perhaps, more significant than the chart shows given the heavy focus on building in London.

If the government plans to reverse this trend it will influence what and where homes are built. It is worth noting how more higher density and brownfield development went hand-in-hand with a rise in flat-building.

NHBC figures show that between 2002 and 2008 the proportion of flats rose from below 30% to just above 50%. That has since returned to around 30%. In the north flats now account for a lower share of the housing mix than they did at the turn of the century.

Politics is paramount in determining the appropriate stock and its satisfactory distribution. Too often the political machine distracts attention from what really has to be done.

The Housing White Paper may lack vision, be bereft of big ideas. It may be a long way short of ideal. It is definitely not radical. But it does seem to offer an important correction politically. Whether it will greatly improve matters is another question altogether.