A new private gallery floats delicately within the robust host structure of a listed barn. From outside, you’d never know it was there 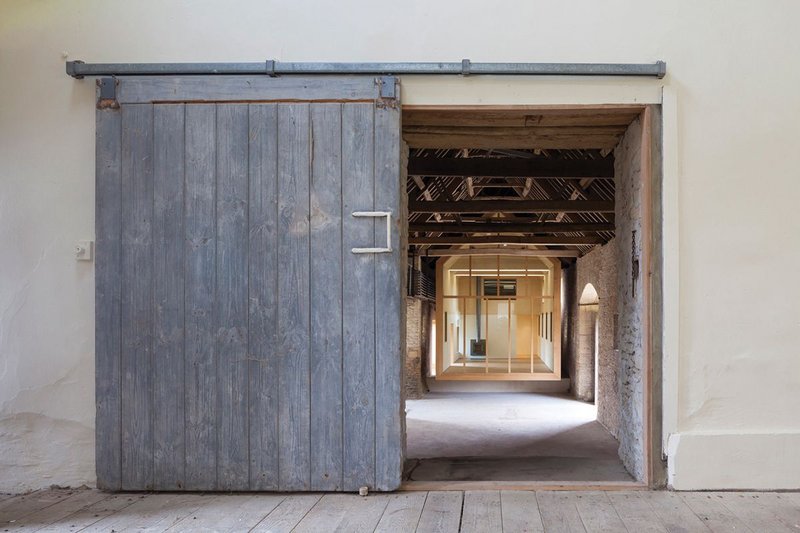 Inside the barn looking south, the gallery seeming to hover within the grade II listed space. Credit: Craig Auckland

Something’s hiding in a barn in a village outside Bath, only visible if you roll its heavy timber doors away to reveal it. Approached from within the 18th century stone farmhouse it is appended to, this experience is slightly more architectural. A narrow corridor from the farmhouse takes the visitor to a lofty, highly crafted insertion that not only acts as the owners’ private art gallery, but allows the raw structure of the imposing barn to be viewed from conditioned comfort.

The cabinet-like Pod Gallery, which received an RIBA regional award, was designed by young firm Stonewood Design, who hail from the Feilden Clegg Bradley stable but are now based in the picturesque Wiltshire village of Castle Combe. It is one of two RIBA accolades the rookies have picked up this year.

The clients, a retired couple who wanted to extend their grade II listed farmhouse in an imaginative yet inconspicuous way, found Stonewood through a internet search that listed their past experience of turnkey barn conversions. But this, a 50m2, £5000/m2 extension of the original house that leaves the listed barn effectively untouched, is unlike anything the firm has worked on before. The gallery, designed to hold the clients’ art collection, which includes some fine watercolours, had to be highly considered, but the architects were also keen to respond to the rough and ready nature of the barn itself. The independent, marine ply timber framed construction, cantilevering out into the space, is a simple object that belies the complexity of its construction. 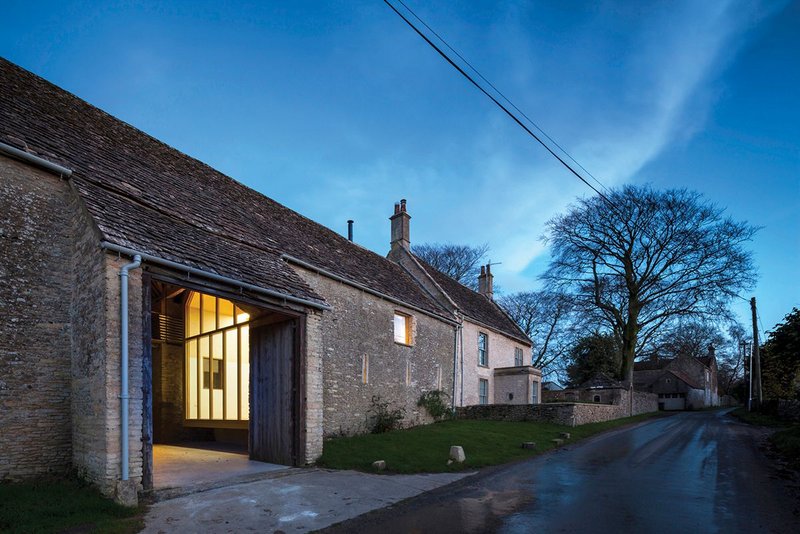 ‘It was like building a ship in a bottle,’ says Stonewood Design partner Matt Vaudin. ‘We wanted to create a contrast between the concepts of the big cold barn and the soft warm pod floating within it while being very careful not to touch the barn itself.’

At first they considered steel, copper, even mirrored surfaces to realise the pod, but ended up settling with timber, although in a wholly new guise to counterpoint what was there. So the 200mm wide birdcage insulated timber stud frame is clad either side with two layers of 18mm marine ply and appears as a highly engineered structure within the irregular stone walls and timber trusses of the barn, seemingly hovering above the floor where the foundations of the original building stepped down. Part of the challenge, Vaudin explains, was that the pod had effectively to be treated as an exterior structure, with its own waterproofing and insulation distinct from that of the barn it sits inside.

This separation was formalised with a 600mm gap all around between new and existing. This included the complex queen post roof, which the pod structure duly works its way around, adhering to the same 600mm spacing diktat. It was an approach that helped smooth the planning process too: the conservation officer was attracted to the fact that the whole concept would be reversible without any effect on the original building.

All this added up to a logistical challenge. Vaudin recounts that a team of specialised carpenters had first to build the suspended floor that allowed them to connect to services and was anchored to the existing foundations to prevent wind uplift when the barn doors were open. Then the birdcage stud structure was assembled off a scaffolding frame that gradually moved forward into the barn space as the build progressed.

Once the frame was assembled, the carpenters had to insulate and waterproof  it, then attach the finishing birch ply on the inside face. On the outer face this meant manoeuvring 8ft by 4ft sheets of marine ply within the 600mm wide gap to fix them before applying fire retardant paint, followed by the painstaking process of sanding them to a silky smooth finish. A site manager was there throughout and, Vaudin attests, treated it as a labour of love.

For the glazing, Stonewood considered a number of options for the end wall that looks into the barn space. An initial idea was to crane 6.5m high double glazed units in through the roof and link them with silicon joints but, cost implications aside, it seemed too clinical a solution. Instead, they opted for smaller units set within joinery mullions and transoms. Internally, these align with neither the internal birch face nor the lower level plaster line. This is deliberate.

‘We felt we wanted to respond to the logic of the barn and to the fact that nothing is really straight – not the walls, the roof or the floor – an aspect we wanted to reflect in the new design,’ Vaudin says.

The result is tiny but palpable misalignments between this end wall fenestration, the deep oak reveals of the pod’s prefabricated windows and even the lime plaster hanging walls. The Barrisol ‘skylights’, lit behind by LED fixtures to give an even spread of light to the artworks, are the only elements that, cloaking the trusses as they do, seem to align with anything.

Interestingly, the same approach manifested itself in the understated nature of the original barn refurbishment. The clients were keen to leave the barn as untouched as they could. Patching of the roof was piecemeal, and while a new flagstone floor was mooted, the original concrete remains. Pipes from the old agricultural oil tanks still run along the walls and all the openings remain unglazed, apart from a couple to stop birds roosting.

Externally, cast iron guttering is unchanged and the barn doors, which have developed their own beautiful patina over time, have been retained on their original runners. It is still, to all intents and purposes, a working agricultural building. Vaudin says the intention is that it remains so; the clients are keen equestrians and are considering moving their stallion into the barn where it will, in a spatial sense, become part of the family.

Stonewood, meanwhile, appear to be on a winning streak. The Pod Gallery has been shortlisted for the Wood Awards, which will be announced later this year, while their Myrtle Cottage Garden Studio has not only won a RIBA national award, but has made it onto TV, in the form of George Clarke’s Amazing Spaces series on Channel 4.

With their recent competition entry for Kingswood Preparatory School in Bath beating some big-hitting London practices, it appears that from their humble country roots, Stonewood too might be one to watch.