Barely visible from outside, eye-popping additions to a former rectory by young practices Public Atelier and FUUZE reveal their quirky intensity in the courtyard, including a dining hall the youngsters share with older patrons of the adjoining day centre

Of all the buildings I haven’t visited because of corona­virus these past few months, this is the one I regret the most. If you’ve travelled through any rural area in mainland Europe you can imagine its setting: a small, almost forgotten village with some formerly grand buildings that no one is sure what to do with, or how to pay for their upkeep. The village is quiet, you’ll barely see anyone during the day, shutters rolled down on lots of houses, net curtains drawn across. Plants will be growing high up on the cornerstones of its best buildings, grass sprouting between the gravel of the spacious courtyard that would once have clattered with the sound of shod hooves. A lonely tractor will perhaps be working a field as you drive out the other side. Very occasionally you will stumble across a piece of modern architecture that will surprise you.

Vřesovice is a village of 600 people, 50km between Brno and the Slovakian border in the Czech Republic. It too was one of these sleepy rural places with a past more illustrious than its present. In the 1700s it was a resting place for travelling bishops and the centre of the village still has a series of civic buildings that reflect centuries of strategic importance – a small castle, a bell tower, church and a baroque rectory for the bishops, the latter a bit crumpled by recent history.

The rectory passed to the state during the Czech Republic's great nationalisation in 1948, when it became a farm building and a fire station. In the 1970s and ‘80s it was a school for masonry workers, then after the 1989 revolution the church took it over again, but it later became empty. Only in 2013 did the mayor strike a deal with the church to bring it back into use for village residents on the conditions that the town hall would have to restore it and the priest had to live inside. 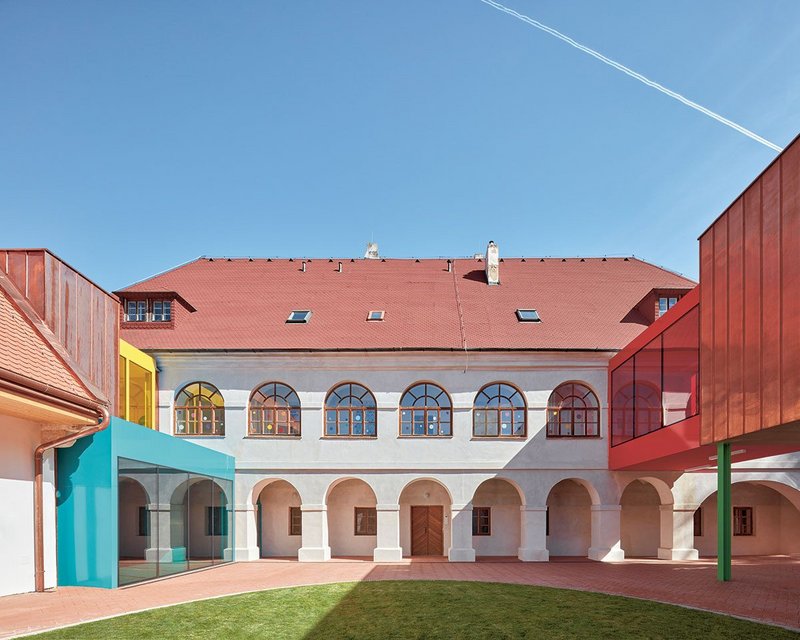 The courtyard has become the centre of things with playful new bridges that connect the main building with the wings behind. Credit: BoysPlayNice

They settled on building the priest a new home elsewhere and opened two primary school classrooms in the main rectory building instead. This was followed in 2015 by the creation of day centre spaces for older people in the former stable wing behind, with shared dining facilities for both. This is where you will find the surprise contemporary architecture. And as architects Jiri Markevic and Jaroslav Sedlák from Public Atelier and FUUZE respectively explain, their project has made the village ‘kind of famous’ and the number of children living there is now growing.

Markevic and Sedlák were invited onto the project in 2016 via an engineer they had previously collaborated with for feasibility studies. The school needed to expand capacity and the mayor needed to save the rapidly decaying roof trusses in the spaces above the day centre. At the time the school had two or three classrooms in the main building and the courtyard was used as parking and a store area. The brief was to create two new classrooms and two vocational teaching spaces for IT and English.

However, the architects saw an opportunity to connect everything up and, with the help of the conservationists, they succeeded in pushing the ambitions of the mayor so that the project outline expanded to giving the whole complex a new lease of life. The proposal didn’t touch the inside of the rectory or previous areas of work, but revolved around the courtyard, stables and collection of outbuildings. The idea was to ensure both schoolchildren and visitors to the day centre would be comfortable using all parts.

On the ground floor this has been done by opening existing buildings to the courtyard. Meanwhile, at first floor level, the roofspaces have been used to create a circular route that connects all of the wings of the former stables and outbuildings with the existing rear gallery of the rectory via two new colourful closed bridges. Above the L-shape day centre, the raftered roofspace with its cosy, timber attic feel has been restored to create a multifunctional teaching room which is also used for class sleepovers. Here, the main baroque parts were saved and they introduced two large copper-clad dormer windows looking towards the courtyard and new skylights that face the village. Beyond is the more laboratory-like white and steel IT room, followed by a corridor of toilets, showers and storage.

The two new general teaching classrooms are positioned on the fourth side of the courtyard above a currently redundant ground floor space. Here, the roof was completely removed and replaced by a terrace at the back that has views onto the church to the south and a more contemporary box on top that oversails the ground floor to create a covered walkway through the courtyard. Green columns support the copper clad cuboid above.

Across the project, new and historical parts are continuously intertwined, but made clearly distinguishable from one another. Classic plaster facades, red roof tiles and external copper guttering deliberately contrast with new cubic forms, supremely smooth surfaces and bright colours that saturate through cladding, glass, internal wall and floor choices. Passages, connections and separations are accentuated, bringing playfulness and the possibility of operation and movement. The courtyard itself has been transformed by red brick paving encircling an oval lawn for play. Copper detailing between new volumes that project forwards from the original building gives distance and distinction between old and new, wrapping easily around baroque elements. 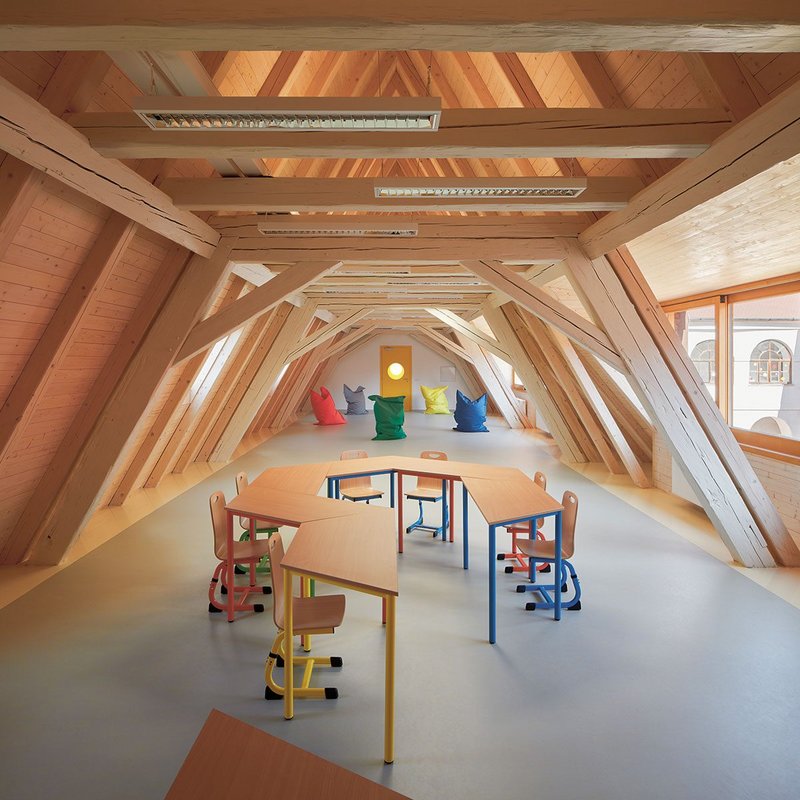 ‘We chose bright colours to create distinction between old and new – the primary colours plus green,’ explain Markevic and Sedlák. ‘It’s the external cladding but also glass so when you pass through you realise the change and the colours help with orientation.’ The new routes make the school accessible too. Children are free to choose whichever entrance they wish in the morning – under the red bridge, yellow bridge, gym green door or through the original rectory. Graphic design and wayfinding are made of stickers that can be changed as uses do, in a typeface specifically designed for the project. In general, the contemporary elements face the courtyard, with only the yellow bridge and fire escape stair visible from the village, making the scheme a secret, eye-popping world, particularly special to children.

The project was, however, complicated. Each area had a different construction system for the architects to adapt the programme around – timber, steel or masonry – and they were unsure of what might be found. A big scheme for a small village, it had to get national and EU funding (amounting to about 80%). But the school has 55 pupils and is now thriving. Vřesovice is too as new inhabi­tants move in. 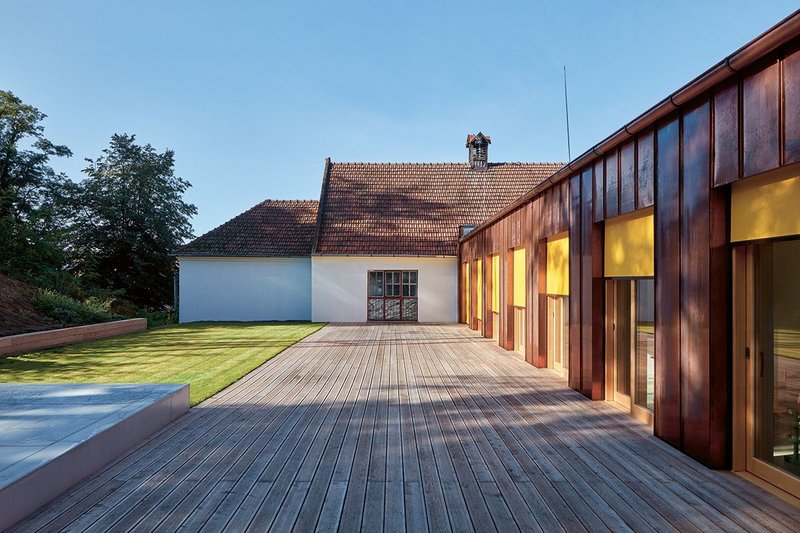 It’s been good for the young architectural prac­tices and their directors as well.  Another village has approached Public Atelier and FUUZE to design a kindergarten, another school wants an extension to their building in a city and there’s a renovation of a town hall. Maybe I’ll be able to get to one of those instead.