Two homes by HCL Architects, squeezed into an unobtrusive corner of Fulham, flaunt their sustainable credentials – and work them hard 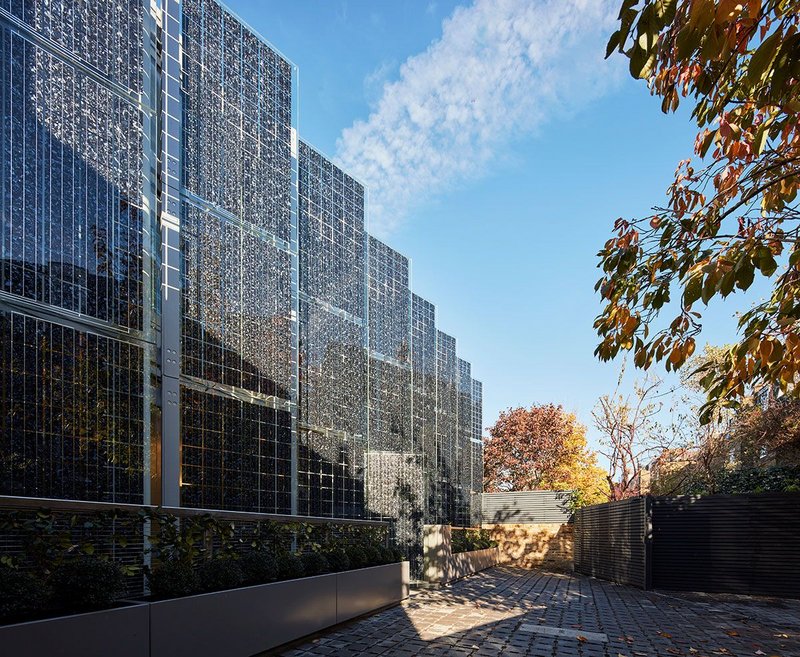 View down the front of the two mews houses in Fulham showing the row of angled solar screens in front of the elevation. Credit: Dennis Gilbert. Courtesy HCL Architects.

HCL Architects’ two new houses in Fulham, west London, wear their photovoltaic hearts not on their sleeves, but on their facade. Rather than tucking the energy generators away on the roof, the architect took an upfront approach that not only made the panels a key design feature but solved tricky overlooking constraints as well.

The practice has previous in this overt use of PVs, namely on the Kingsgate House social housing block completed in Kensington in 2014. But while the energy-generating panels in that development were attached to the facade, the solar screens at Fulham create an independent, 5.55m high structure in front of the semi-detached mews houses.

One of the last projects to be worked on by HCL’s co-founder, the late Richard Horden, this is a redevelopment of disused garages tucked away down a narrow drive off Fulham Road. Passersby that glimpse the facade glittering in the sun may well stop in their tracks – these houses are quite a contrast to the local conventional Victorian properties.

When HCL took the project on, permission already existed for a more conventional, two storey pair of semi-detached homes. The new design introduces a lower ground floor level to create two houses of 150m2 each.

Overlooking issues, and vehicular access for the houses in front of the mews on Fulham Road, severely constrained the design. To make the most of the tight site, the houses sit at the rear perimeter with glazing only along the south east-facing main front elevation. The development has an exposed steel-framed structure, with side and rear elevations above party walls clad in yellow London stock brick to match the surroundings.

It’s the south-facing solar screens that make the design. Angled at 45° in front of the fully glazed Schueco elevation, these are a pragmatic solution to the need to admit as much light as possible without overlooking the rear of the houses just 18m away. Initially, HCL looked at angling the facade itself, but this would have compromised the interior space and prohibited the 1.2m wide courtyard at the front at the boundary of the set back zone.

With screening a necessity, HCL made these elements generate energy rather than simply using a metal screen or frosted glass. As well as providing privacy, the shading also prevents sunlight overheating the interior.

‘We are honest about the PV cells. They are visible on the outside and are doing a job’

‘We are honest about the PV cells. They are visible on the outside and are doing a job, they screen the views to avoid overlooking issues and maximise daylight by allowing the use of full height glass,’ says HCL associate Angel Huerga, adding that the dual function (energy-generation and screening) enables the design to incorporate a green sedum roof too, adding another layer of sustainability.

The 10 shutters are angled south in contrast to the south-east facing elevation and give the required oblique views. Each house has five screens of PVs supplied by Romag. These are supported on steel posts in line with the 1.5m modules of the structural grid. Each 400kg screen is divided into three 1.2m wide panels of PVs totalling 192 cells.

Finding a contractor to build the PV structure with the desired visual lightness was the biggest challenge of the project, according to Huerga, since most contractors wanted to frame the entire panels rather than just the side that attaches to each post. The project was eventually realised by contractor ECP with each screen supported on one side using only two rounded brackets fixed by two bolts. The structure ties back to that of the main house at ground floor slab, first floor slab and roof level.

It is what it is

‘The bracket is very carefully designed,’ says Huerga. ‘It had to be right. We didn’t want to hide the bolts and structure. We wanted to say “it is what it is”.’
Each shutter has three, 25mm thick panels of PV cells within low iron glass, totalling 192 cells per screen. HCL chose the silvery grey multi-crystalline silicon option for these, because of the depth of the design and its glittery, jewel-like quality.

‘It’s like a little work of art,’ says Huerga, adding that it reflects the sky, making the whole building appear lighter and more permeable. On the inside of the houses, the grid of the cells creates a dappled lighting effect.

At each entrance, the lower of the three panels opens independently to give full access. The building facade has sliding doors on each level and a Juliette balcony on the first floor.

HCL certainly gets the most out of the site. The layout is compact, with kitchen/living space at ground floor and two bedrooms (one with a top-lit en-suite) and a bathroom upstairs. On the lower level is a further bedroom and a flexible use/guest room, plus a further bathroom and utility control room, which the PV cells feed into. The sliver of front courtyard allows natural light into the loser level rooms – although it’s a shame the site didn’t allow this to be more generous.

But it’s the solar screens that are the stars, not just visually but practically. With a peak output of roughly 3kWp, they are expected to meet most of the daily electricity requirements for the houses. It remains to be seen whether the government’s decision to close the Feed-in Tariff (FIT) scheme to new applicants from 1 April will limit further domestic PV projects. Set up in 2010 to promote the uptake of renewable energies by enabling excess electricity to be exported back to the grid, its closure won’t affect existing solar households. A replacement scheme is believed to be in development.