Newly restored Rainham Hall has not one past but many. Studio Weave’s interpretation values them all 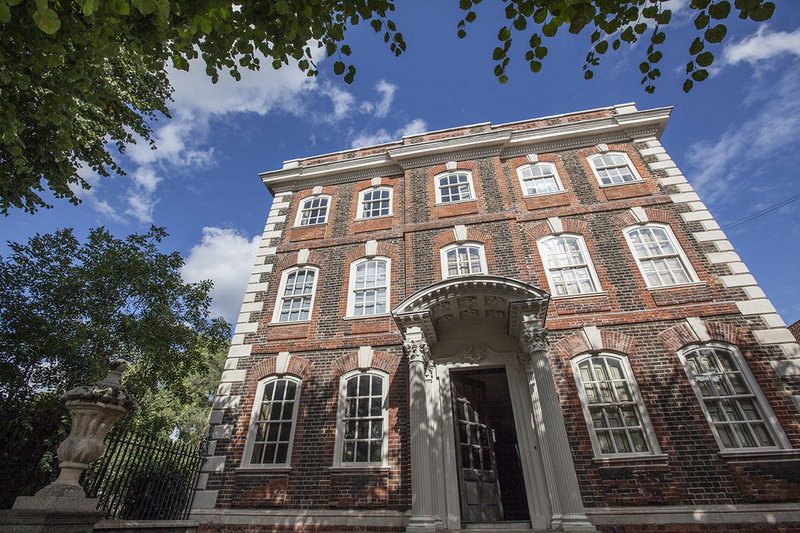 How do you create a visitor experience for a National Trust property where there are no handy artifacts, historical collections, or visual representations of the original owner? That was the challenge facing Studio Weave at Rainham Hall, an 18th Century merchant’s house in Havering now open to the public after a £2.5m conservation.

The resulting interpretation makes a virtue of this absence, veering confidently away from the familiar pine-cones-on-chairs approach to something far more engaging.

While the Hall lacked the consistent habitation of a central family, what it gained was a diverse assortment of owners and tenants with their own distinct stories, from original owner Captain John Harle through to society photographer Anthony Denney in the 1960s – one of a series of tenants after the National Trust took ownership in 1940s. Many left their mark on the décor for better or for worse– Denney with gold decoration and marble, 1980s tenants with bright blue rag-rolling. Rather than strip everything back to a perceived ‘golden moment’ in the Hall’s history, the layers of inhabitation are allowed to merrily co-exist.

‘We’re the latest in a long line of people who are trying to reinterpret it,’ says Studio Weave co-founder Maria Smith.

Studio Weave’s interpretation strategy proposed a series of temporary exhibitions celebrating key characters and events from the Hall’s history. These begin, fittingly, with Everything Harle Left Behind, an exhibition about the Hall’s first owner. There is no ‘correct’ route to take, instead the exhibition is conceived as cellular and quite intimate with ‘lots of little things to see and explore’ and plenty of places to sit and pause, according to Smith, who recently left Studio Weave to co-found new venture Interrobang. A recurring theme is loss – whether Harle’s lost first wife, the loss of business ventures, or the loss of specific items.

My favourite two rooms are both on the ground floor. A panelled room is filled by an evocative immersive sound and vision experience of being at sea, with the waves sometimes calm, sometimes crashing, projected all around you on the walls. Lloyds Coffee House, which Harle was known to frequent and do business in, is recreated in another room. Set out with benches and tables, the news of the day and with real coffee available to drink, this was a key networking venue for any successful merchant.  Another highlight is an upstairs room dedicated to long lost items yielded by the house during its restoration from beneath the floorboards. Five little collections of odd bits and bobs from various rooms such as a marble, children’s ruler, a coin, and a hair grip, are displayed with the gravitas of precious relics. There’s a nice twist when you open one of the nearby cupboards to reveal a special lost property display – as yet uninhabited – with the outlines of the sorts of objects that no doubt will soon populate it, adding a contemporary layer of occupation into the mix.

During the early stages of work on the interpretation, one of the ‘lost’ items of the original owner – his will – was found by a local collector by chance at a car boot sale many miles away. This extraordinarily fortuitous find gets pride of place in another of the rooms.

There are plenty of other nice touches in this quietly inventive and often quirky interpretation – a bath tub with integral sink is appropriated as a diorama to illustrate the story of one of Harle’s lost ships; coal sculptures in the fireplace refer to Harle’s beginnings as a coal merchant; a nautical version of Snakes & Ladders – Sea Serpents and Ratlins – illustrates the high-risk nature of a sea merchant’s ventures; and a series of Hogarth prints evoke London life at the time of John Harle.

The interpretation is temporary. Later next year, it will be replaced by an exhibition about childhood in Rainham focusing on the hall’s time as a nursery in the Second World War, followed in 2017 by an Anthony Denney exhibition.

National Trust general manager Ed Ikin hopes the opening of the manor house will contribute to the current tide of regeneration in the Havering area: ‘Everyone one needs a bit of heritage in their lives … a bit of culture after a day at Lakeside shopping centre.’