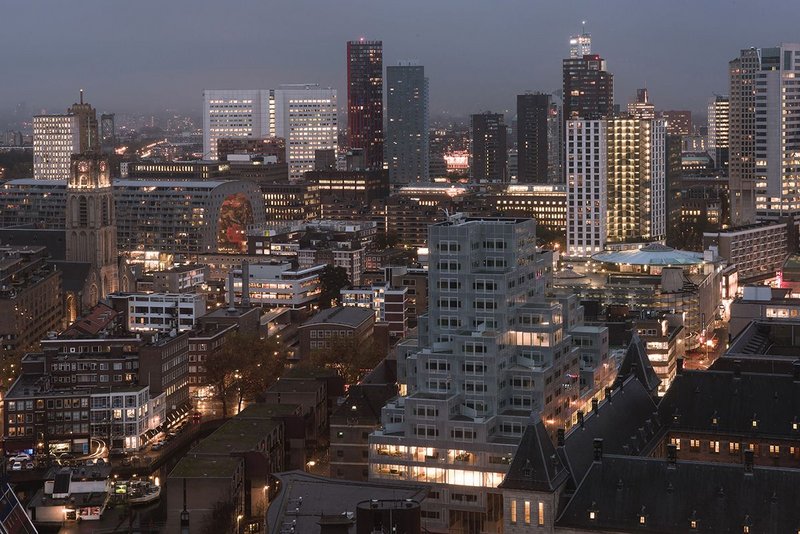 I felt like Rem. Architectural legend has it that when Koolhaas went to open OMA’s Seattle Central Library in 2004, after walking a few times around the building, he had to call the office to find out where to get in. Here I was in the dark, wind and rain at Rotterdam’s latest bulky building on its opening night, now late for the tour I had arrived early for. The four green celebratory light beams directed across the city at the new Timmerhuis – a building of municipal offices, a museum, retail and 84 apartments – couldn’t even help me.

It is an obscure site for a €100 million gateway project: wedged between a dirty stretch of canal and a similarly unattractive service road to the back of the city hall and Post Office – the only surviving pre-war relics (and with that their architectural focus on frontage) in a city centre completely destroyed by bombing. I lived in the city for nearly a year without really knowing where Timmerhuis  was happening and catching glimpses only a handful of times by mistake.

Now it’s complete. I asked someone standing outside what looked like a back door where the municipal entrance was and he didn’t know. Nor did two women inside. I was actually already there.

One of my first lessons at architecture school was that it’s a bad building if it needs an entrance canopy to find the door. Reinier de Graaf, OMA leader for the project, seemed to suggest it was my problem – but it isn’t, if there is any truth behind the legend. It’s an odd scenario for a building that’s glazed all over, pertaining to be about transparency, access and the public. The only external opaque parts, giant industrial steel sheets, are in fact the doors. And next to no one understands the architectural reference of pulling back the scalloped glass ‘curtain wall’ panels above them to signify the entrance points in a facade that is otherwise flat.

But the building’s central street, criticised for being a shadowy hulk of its original weightless competition cloud-on-stilts design, is beyond that. So what if it had lived up to its free hovering cloud rendered expectations?

Timmerhuis’s main entrance, an aspirational public forum laid with pavement bricks, opens from a dead end on one side to be only marginally offset from another on the other. Between two four-sided ziggurat towers, the entrance mimics the idea of the covered passage of Amsterdam’s Rijksmuseum, but with nowhere to go. 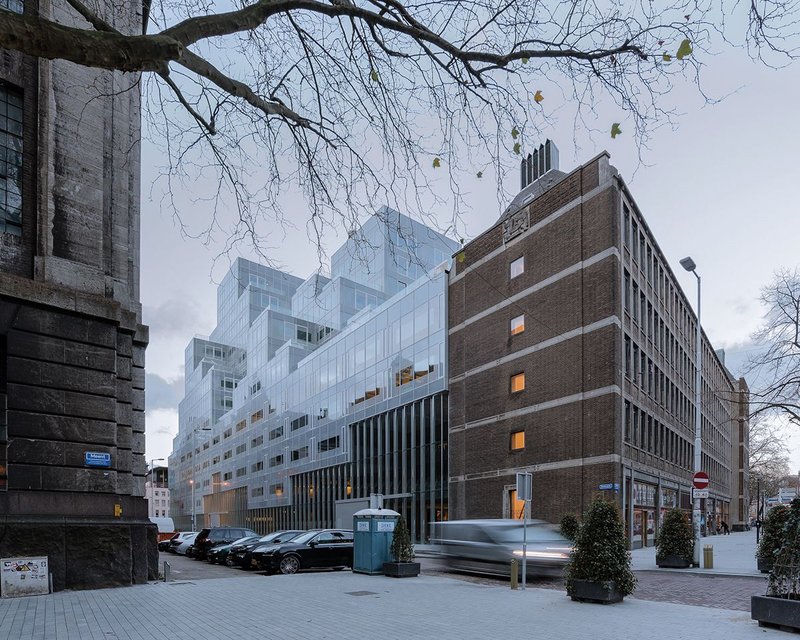 Timmerhuis from Meent shopping street with the steel panel entrances on the main facade just visible down the side street. Credit: Sebastian van Damme © OMA

I could hammer on about this, but it would be unfair. The Timmerhuis is designed to be appreciated at a cityscape scale. It has computer metaphors in abundance. Timmerhuis is an out of control city-sized game of Tetris, played with 7.2m by 7.2m by 3.6m blocks. Its two truss and beam network atriums are like part of a real-life Sim City that has run out of money, squares yet to be filled in, its facade a set of hyper pixellated images. If you don’t know the building is on a trapezoid site behind the former, now absorbed, 1953 Stadstimmerhuis office from which Rotterdam was rebuilt after the war on its two most prominent street elevations, you will struggle to understand it. But zoom out from street to tilted satellite view and Timmerhuis is a typical Rotterdam building.

Its energy becomes about something else: massive, bold, brave and based on the cumbersome, but thrilling, formality of a 1960s masterplanning grid.

‘Because the city is a mess,’ answers de Graaf to how OMA’s third building in Rotterdam is representative of the city it stands in and the practice’s home town.

‘It was bombed in the war. Then it was reconstructed, and then there was a modernist reconstruction. Then there was a humanist revision, and then a post modernist critique of the humanist revision of the reconstruction. Then there was a wave of high-rise, then people became sick of high-rise so it became a free-for-all. There have been successive architectural styles – there is a different thing almost every decade. The sum total of that is a medley of many styles, of utterly improvised images. This building tries to be an echo of that improvised image, rather than the imposition of another grand statement.’

But it seems the problems at street level stem from the very idea of a grand statement – or frontage. As mentioned, the building absorbs a thin L-shaped 1950s building to the rear and side – its two most prominent elevations. Instead of giving in to the existing elevations for the main entrance, the architect changed the direction of the building to a ‘front’ that has very little presence – but the one that visually is primarily OMA.

‘The beauty about Rotterdam is that it resists vision – it is vision-proof. If you build in Amsterdam there is something you can ruin. There are centuries of history and you can be in discord. Here everything is at odds with each other so that is impossible. The building represents that – it’s a mini style in a mini city in a context of a building.

From this main frontage, de Graaf describes the design concept as two Christmas trees or pyramids sitting above and inverted below the roofline of the attached existing building. Above this line it accommodates a crest of outward-looking apartments with large terraces that occupy the  neighbours’ roofs, while below the building consolidates several municipal departments in offices with inward views, as well as the upcoming Museum of Rotterdam – currently three museums scattered across the city – and commercial units on the ground floor plinth.

At its non-identical twin peaks, the apartments are surely some of the most exhilarating in the whole of the Netherlands – with mid-level panoramas across a lit-up equally blocky modernist urban jungle. One of the building’s photographers, Ossip van Duivenbode, who moved into one of the three-bedroom apartments in the summer, says the cascading levels are perfect for waving to your neighbours: ‘It’s like living in a village in the sky. I’ve met more of my neighbours here than I ever did in my previous apartment building.’

Yet like so many projects, things are not as they were originally conceived. The apartments were intended to be affordable micro homes for young professionals, but reality bit and, to make the project pay, prices ranged from €145,000 for the smallest (45m2) to €1.7 million (380m2) for the largest – beyond the average architect living and working in the city.

‘The building is here because of the economic crisis,’ says de Graaf. Commissioned through a competition by the city council in 2009, the modular design of the building anticipated the process through which it would be realised. The previous 1970s building on the site was demolished in 2010, but by then the council had had a change of direction, partially relegating the responsibility for public buildings to private parties. The contractor ended up being the client during the design development and construction document stages, as well as the developer of the apartments. Such a constructible design was inevitable. 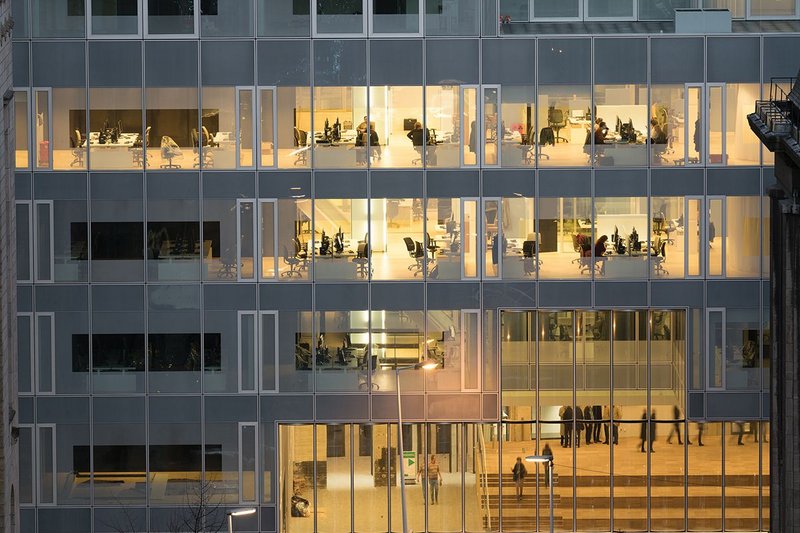 Frit on the facade gives the appearance of much smaller glazed openings when unoccupied inside. Credit: Ossip van Duivenbode © OMA

‘The design is an experiment in creating the most variety from standard prefabricated parts. This size of module is used in almost every office building in the Netherlands, and a format that contractors encounter frequently. It is also a building form that we could have changed slightly without changing the image – an idea we began with Hague Town Hall in 1986,’ says de Graaf.

Inside, the building is organised around two cores and two atriums. The only ‘pure forms’ are the voids, next to the most solid. At certain points, the internal Piranesian complex of steel crashes into retained office, its external wall automatically becoming a textured wallpaper for the new space. Great chunks and swathes of structure cut through the spaces, but strangely such extensive circulation room makes the experience and logic of the building mindboggling. There is no sense of cantilevering: you expect what goes up to come down. ‘Islands of specificity’ for break-out and meeting areas combine clinical curtains taken straight from OMA’s G-Star building in Amsterdam with rugs printed with old maps from the city archive – the only ornament possible in an all-glass open plan floorplate. There is a surprisingly shiny palette of aluminium floors, rolled steel wall panels and back-lit lockers for hot desking.

In the offices, little distinguishes the interior floor to floor. Should the municipality leave, the space is theoretically flexible enough to be made into a multi-tenant building of 200m2 units. Now, there are 1295 desk spaces for 1800 employees. More light-hearted touches – reminiscent of the OMA of yesteryear – include the suspended bridge over the atrium to the canteen and terraces of WCs looking into it.

In terms of sustainability, except that half as much steel as the Eiffel Tower went into the building, the Timmerhuis sets a new standard as the most sustainable multifunctional building in the country, with a BREEAM ‘excellent’ rating. The modular structure offers flexibility for various functions, with some homeowners buying two flats and merging them. The atriums are the lungs of the building, playing a role in heat and cold storage. Meanwhile, it is triple glazed and has an electric car-sharing system in the basement for residents to reserve via a BMW mobile phone app.

According to many local architects, the frit window pattern has not gone down well. The original idea still resonates most with people. But its access strikes me as the building’s biggest problem. For all that, the bright lights, hidden alleys, odd juxtapositions and cascading buildings are all part of the simulation computer game architectural mash-up that welcomes you to Rotterdam. 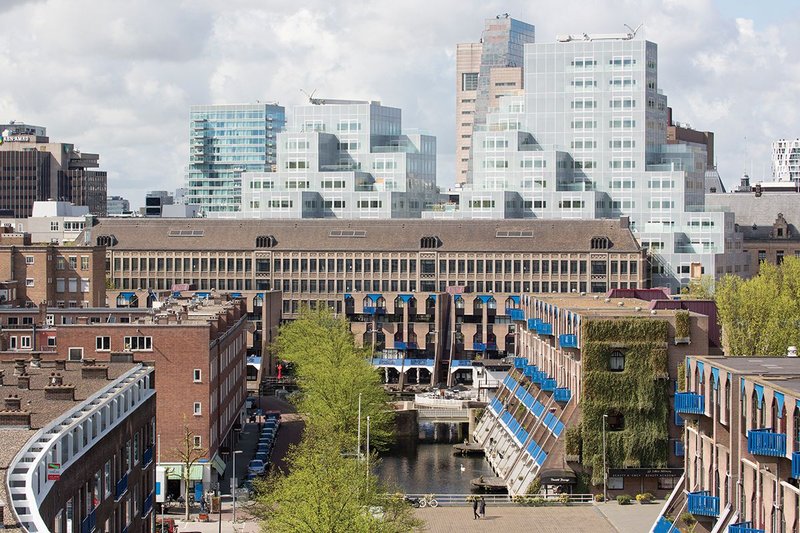