A mass of conflicting demands for a five bedroom ‘extension’ outside Paris could have stymied a lesser imagination, but with Christian Pottgiesser’s architecturespossibles the result was extraordinary 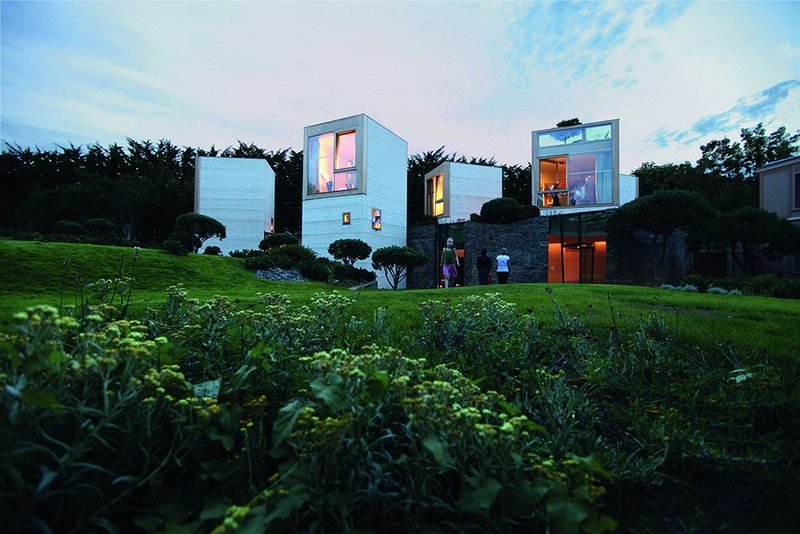 View of the bedroom towers of Maison L, looking north, the building rising out of the landscape. Credit: George Dupin

Perhaps it is the Teutonic roots of Christian Pottgiesser, partner in French design firm architecturespossibles, that make him utterly at home with the notion of limitations and how to work within them. ‘It’s the interpretation of constraints that I like– they can be seen literally or reimagined,’ he says philosophically. ‘As an architect, I don’t look for them, but if they arise I see it as my job to analyse them as best I can.’ This seems a downbeat way to explain Maison L, a family home outside Paris – probably one of the strangest private houses to be built in recent years or to appear on the Manser Medal shortlist. But if that’s true, argues Pottgiesser, its final form is as much the product of the client’s thinking as of the architect’s.  ‘If you can propose something that’s explicitly understood by the client as being an expression of themselves, that’s when it truly becomes their home,’  he says, stating the patently obvious in the way of Nietzsche or Heidegger.

But getting to the core of the philosophy may take some manoeuvring past the initial perceptions of indulgence and excess. A home for a successful professional couple and their four children, and situated in the assuredly affluent region of Yvelines half an hour west of Paris, the house nestles comfortably in 5,000m2 of the sylvan department it shares with a number of French chateaux, not least Versailles. However, the intervention is not so much a house as an extension to an 18th century orangery and adjunct building. Then again, at over 600m2 the extension is twice the size of the existing buildings, with most of  it sunk into the slope of the site on the ground plane, the landscape rolling luxuriously back over it. Out of this man-made nature rise five 8m-high oblong concrete volumes, almost identical but orientated differently, offering views out over the woods. The house is effectively three elements; its original buildings – now a large kitchen and reception rooms – surrounded by a sea of common space that swirls round the feet of the third element, five bedroom towers sitting above private bathrooms and individual storage. Simple in principle, the towers rise from this space like Eddystone from the waves.

Such strange forms are rarely generated from the mind of the architect alone, but through the complicity of the client. Here the picture painted is of a two hugely driven people; she the head of a nearly 50-strong French PR firm, and he the owner of a retail goods import business. Her interest in architecture was ‘deep-seated’, his ‘almost non-existent’; but there is no doubt that, to create what they originally proposed as a ‘21st century orangery’, they were demanding, even eccentric, clients. ‘They both discussed everything from spaces to colours and details,’ recalls Pottgiesser, ‘but almost in isolation, without any sense of what these things might cumulatively represent’. He only found out later that he was the fifth architect challenged to come up with a proposal, and even that went through nine iterations before they finally settled on a design. Demands would seem contradictory. They wanted the building ‘to appear tall from the outside, but low on the inside’; there was an insistence that the view from the kitchen in the old house would not have its bucolic view marred by building. Private space in this sizeable house was a priority, but ‘they didn’t want any corridors’. They were prepared to spend a small fortune to create the subterranean concrete landscape that the architect imagined, but refused point blank any suggestion that, for a mere €5000, an existing sewer pipe be moved to facilitate any proposal. ‘It took me some time to understand what was going on, but through conversations, the forms and particularly the towers just came about,’ explains Pottgiesser. ‘They wanted five discreet volumes – one for them and four for the kids. The issue that required all the resolution was what linked the old and new building. In the end we settled on the amorphous concrete plinth form. It sort of absorbed all the contradictory aspects of their original brief.’ He comments nonchalantly, as if it were the kind of idea you’d have slapped yourself for not having considered before.

Asked about his penchant for testing rules to the limit, Pottgiesser cites not architects but French epistemologists Henriette Champetier de Ribes and Abraham Moles, former mentors of his, who had worked with Corb and been involved with things as diverse as national cybernetics development, design of the cockpit console for the NASA shuttle programme and wayfinding for the Montreal Olympics, both thinkers analysing intuitive learning. This might explain why his own architectural processes involve questioning givens and why he is more excited by the contingency of mediaeval architecture than eternal rules of classicism. ‘Architects seem driven to visibly evidence the structural integrity of a building or show its function. I think architecture, like life, need not be as pure or demonstrative as that – life is a more supple thing,’ he believes. Whatever, it certainly explains his less than functional approach to Maison L’s rooflights.

‘The issue that required all the resolution was what linked the old and new building. The concrete plinth form sort of absorbed all the contradictory aspects of their original brief’

Yet despite the clarity of the formal moves to fulfill the brief and overcome planning law via lateral thinking, what’s most noticable about the proposition is how bizzare it is – that as a functioning family home the concept is almost counter-intuitive. This seems partially due to the forcing together of intimacies and isolations. An intimacy was the stipulation of no doors where possible, yet its isolationist towers present a Rapunzel-like solution to the riddle of the clients’ need for privacy even within the family. From the intimacy of the old house, where the kids had once surrounded the marital bed on mattresses, we have cavernous spaces that might well leave the little one diving under the bedcovers. Were the proposed openings at the foot of the towers there to increase connectivity or to create a panopticon? Resolving the other issues throws these core paradoxes into sharp relief – the plan is a Venn diagram characterised more by its symmetric difference than its intersections.

But what’s interesting is how, despite these contradictions, the design beguiles the viewer into accepting these conditions. Pottgiesser recalls the visiting RIBA Manser Medal panel asking the client what kind of brief would produce such a strange looking house. The client bemusedly replied that he ‘didn’t think anything was strange, as everything is exactly as has been agreed with our architect’. Even the panel apparently left at the end of the day thinking the forms were an obvious response to the brief. The allure of Maison L then, is how it draws you into accepting its own internal logic without questioning what it might say to us about the notion of ‘family’ in the modern world, and how this might now be an abstract construct in a society that’s content living in atomised isolation. As such, Maison L represents both the beautiful and the damned. Pottgiesser simply says: ‘My wife loves the place, though I admit it’s not my idea of a home.’ But clarifying, he adds with a measured Germanic acuity, ‘Then again, it’s not my home.’