Are there sustainability lessons to learn from ancient buildings? Stonewood Design does the Romans with a museum and reconstructed villa at The Newt

When it comes to low carbon ways of building, heating and cooling, there is a romantic but compelling idea that we can learn from the low tech methods of the past, of vernacular architecture. So a reconstruction of a Roman villa is surely one of those opportunities. To actually build such a villa, as Stonewood Design has done in Somerset, was a chance of a lifetime – and with it came the offer to do primary research in Pompeii alongside dedicated archaeologists and curators, and to source local materials the Romans would have used. There was a huge amount to learn.

To understand why the villa has been reconstructed you have to start in more recent times with the site and the land it sits in, which over the last few years has become The Newt, Somerset. The Newt itself is a phenomenon. Set in an old estate, it has been reinvented as a high end hotel and a garden-based day out with productive orchards and vines. It is populated with a collection of buildings by locally-based architects, including a new ‘tithe’ barn entry building and restaurant by Benjamin+Beauchamp Architects, and a gym and a gallery of bees by Invisible Studio. In a field under a green shed was the ruin of a Roman villa discovered in the 1830s,  and the remains of a hypocaust – the underfloor heating you learn about at school. 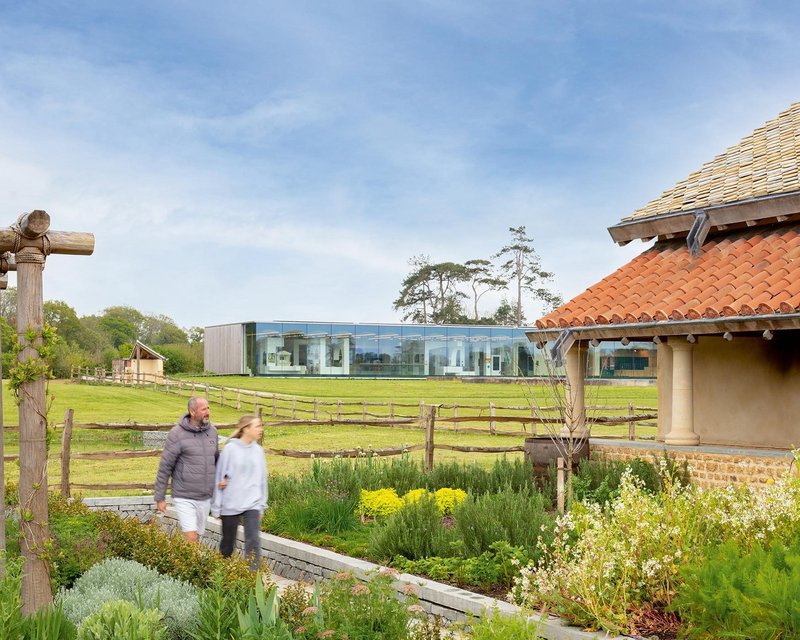 The museum stands sentinel over the archaeological remains of the original Roman villa while overlooking the reconstructed villa. Credit: Craig Auckland

What could be done with it? Would it remain as a group of half buried walls with signboard interpretation dotted around the field? Could it be an audio visual show like the Mithraeum below Foster + Partners Bloomberg offices in London? A museum? How could it be an experience – just as the rest of the Newt is an experience of the productive land? And so the idea emerged of a museum, and a reconstructed villa of the same scale and plan as the historic one.

The result is a lightweight pavilion perched over the best-preserved remains of the hypocaust and bath house, which take centre stage as the main exhibit. Pad foundations were inserted around significant archaeology. Architecturally it shares a lot with Stonewood’s garden museum here – dimensions, servicing along the back edge, glazing along another and a fairly free plan – although the top lit loos need mentioning. Lovely. But early work with the exhibition designer has made a more architecturally satisfying space. It is all electric, with no fossil fuels and originally aimed for carbon neutrality but taken across this development it reached 1.8kgCO2/m² (regulated).

Quite why so much glazing is needed remains unclear, it seems to be a trope of The Newt. But the downsides are offset by solar control and four layers of glass, beautifully detailed. There appears to be barely a joint between the huge panes thanks to 5mm glass spacers replacing solid ones between layers three and four, so the silicone can be very thin.

The museum overlooks the re-covered archaeological remains with huge timbers marking out significant walls below ground, ready to be climbed, sat on or puzzled at. Continue past the vines and there is the honey coloured villa with a criss cross pattern of lias stone tiles marking out its roof as a cut above the rest. When the remains were first discovered it seemed like a villa of a well off farmer, but evidence emerged that it may have been the  residence of the Roman magistrate for the south west, who ensured roads were maintained, collected taxes and dispensed justice from the tin mines of Cornwall to the lead mines of the Mendips.

Much was learnt during the project from expeditions to Pompeii and other Roman villa reconstructions in Europe. Tricks for drainage, door details and decoration were picked up by Stonewood Design founder Nicola du Pisanie. But there were also lessons on the importance of solidity and craftsmanship, and how tricky making a working hypocaust is – learnt as the project gathered pace at stage 4, on a visit that included the practice’s sister company Stonewood Builders and the quantity surveyor.

The plan was already set out in the archaeology. An enfilade of increasingly intimate rooms mark out the body of the house. There are no turns of corridors, the doors on each side of the room are the only way in or out of each space. The portico that operates more like a veranda links the rooms; the bath house is a less formal series of rooms each leading to each other, the kitchen opens up widely to the veranda, and there's a study where accounts might be worked through. All this looks onto a pool and formal garden, set on the edge of a hill top where fresh air would blow through. The plan protects and mitigates against all weathers.

Thermally, though, the bath house is most impressive. A small fire of two or three logs burns gently in a dip below the building, warming the air of the hypocaust and so the floor of the rooms of the bath house. But more than that it warms the water of the hot plunge pool in the caldarium to a steady  38 degrees. The logs need to be replenished hourly and the tall 1200mm pilae stacks of terracotta tiles in the area below the floor keep the heat steady with their thermal mass. The warm air is vented through handmade clay flue liners or tubili rising the through walls (with back up steel flues) which radiate heat right up the building through the lime plaster on one side and 150mm of stone on the other.

Reducing embodied carbon was not an ambition on the villa project – the complexities of reconstruction and creation of an experience came first. But sourcing much of the heaviest material locally for the villa did reduce its footprint. Roof tiles were originally intended to be ceramic but eventually the local Hadspen quarry was persuaded to supply the 26,000 tiles in blue and white lias. The portico columns, originally designed in brick and render, were converted to limestone – Ham stone and a more functional Doulting from the nearby Mendips – after an historic stone column was unearthed on site. You might think that sourcing locally was a historical necessity but there is evidence of marble dust from Italy making it to Britain for the most polished of frescos and of Mendip lead being valued far into the Roman empire – here lead lines the oak gutters.

Using the structure as the final finish has become one of the clear rules of low embodied-carbon design. Here it is different, with lime plaster acting as a cover up to some of the architects’ favourite structures, such as the brick vault in the caldarium, and it plays a fundamental role in airtightness and moisture control. But the way it is decorated with frescos and wall paintings should give cause for celebration to those who are tired of stripped back surfaces and long for depth in the decoration. The walls depict the full range of architecture, from columns to coffered timber ceilings and panels, all represented in paint, along with niches, swags, statues and food. The floors tell stories too, literally and historically – from the mosaics of Diana and Bacchus known to have been in this villa, to the opus signinum of lime mixed with stone. Aggregates found in original fragments on site included old roof tiles and the whole floor was polished by Roman slaves – Stonewood trialled many aggregates and polishing methods.

As with other reconstructions – at St Fagans National Museum of History and The Weald and Downland Living Museum – there is the sheer pleasure of seeing a different way of building: the rounded corners of lime plaster, thick lead-lined spouts into barrels, interiors without electric light but sconces for oil lamps on occasion, hand-forged ironmongery, wooden shutters and timber detailing on the roof, the benign presence of the portico.

The outbuildings have a more familiar form of timber and thatch with wattle and daub and, on the bakery roof, oak shingles – natural materials that sequester carbon, at least for now. This section acts as the visitor centre housing the treading of grapes for wine, a Roman street food stall, an eating barn and more loos. But they also act a reminder of the agricultural basis of this rural villa and the way the Romans existed alongside the traditions of the countryside of Britannia for centuries. And perhaps there are a few simple lessons in low carbon design too.