When Archer Associates refurbished a classic YRM office block, it couldn’t have dressed it in a more appropriate colour for the eventual occupant, Kurt Geiger 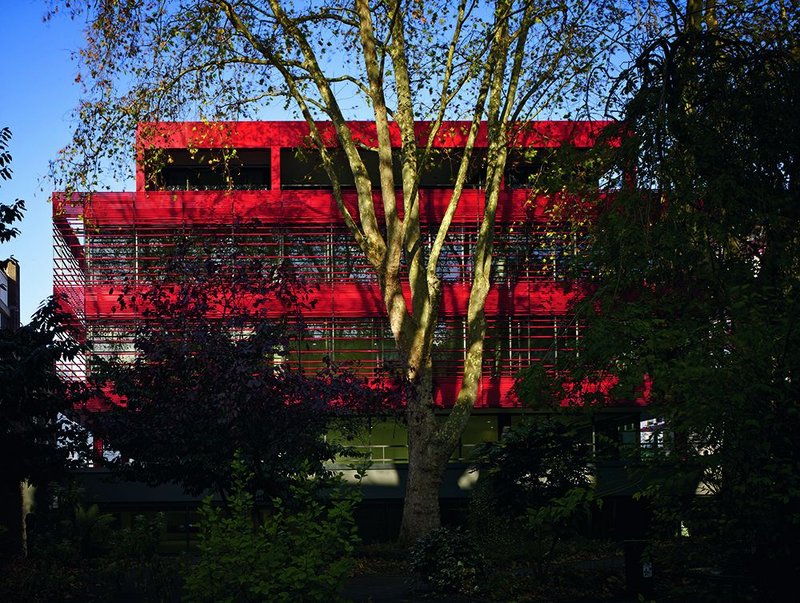 Pompeian red. That is the colour that the Survey of London uses to describe 24 Britton Street, in Clerkenwell, London. It is not on many paint charts. ‘Pompeian red has caused us quite a few problems,’ says Stephen Archer of Archer Architects. It references an artist’s colour; not something convertable to RAL and cladding systems. Nor were the original panels of any use – faded to a dull orange and overpainted they were better for demonstrating the instability of red under UV.

Number 24 Britton Street holds a special place in architecture. It was designed in 1974-7 by YRM (RIBA J, March 1978) and served as its offices for many years, later becoming home to Wilkinson Eyre. It was enlarged, again by YRM, in the late 1990s (RIBA J, March 2000). But when Great Portland Estates took it over it was still overheating and with a sloping site, half its space is in the basement, leaving some workers tucked away in very dark corners. Finding the front door was not too easy either. It was set in behind an historic Bath stone facade which was moved to Britton St in the 1970s as part of wider development of the area, and the entrance appeared as just sliding glass doors recessed beneath oversized red/orange spandrel panels.

Hidden away in a quiet London sidestreet, 24 Britton Street’s reincarnation under Archer Architects now houses another design brand, Kurt Geiger. From here are designed extravagant, perilous shoes that grace the high streets of the UK and the world. The refound red facade chimes with Kurt Geiger’s own branding – a surprising serendipity as it was only confirmed as tenant after the project had gone out to tender.

As a building of special local interest in a conservation area the planners had a certain interest in the colour. The practice went to art historians to work out exactly what Pompeian red is. The team brought along some samples.  ‘The planners wanted to see red but they were surprised by quite how bright it was,’ Archer reveals. The panels were actually knocked back one RAL colour towards red in consultation with the planners. 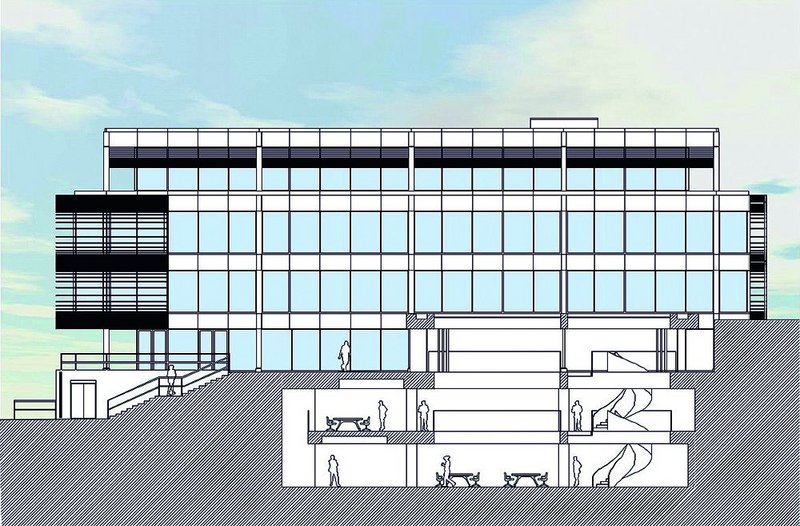 Inside, a new atrium brings in light to a dark corner of the site below ground.

More critical to the building’s future than the aesthetics was the performance of the envelope. Not only did the original cladding’s colour fade, it was also very lightly insulated. The practice kindly describes it has having reached the end of its useful life. Upgraded aluminium panels were beefed up with insulation (now 75mm proud of the glass, rather than flush) and new caps were brought in as the old curtain wall system was no longer on the market.

Shading was also needed to reduce heat build-up. Carefully calculated with the services engineer were an array of very slim, oval-section tubes on the south and south-east facades. Designs for a bespoke profile were ditched when it was realised that wind might start reverberations and a wind tunnel test would be needed. The tubes cluster at the top of each storey for maximum shade but there are fewer in the centre at eye level, leaving the views unobstructed. In the same red, with a red gloss powder coating, they almost represent an abstraction of the building. 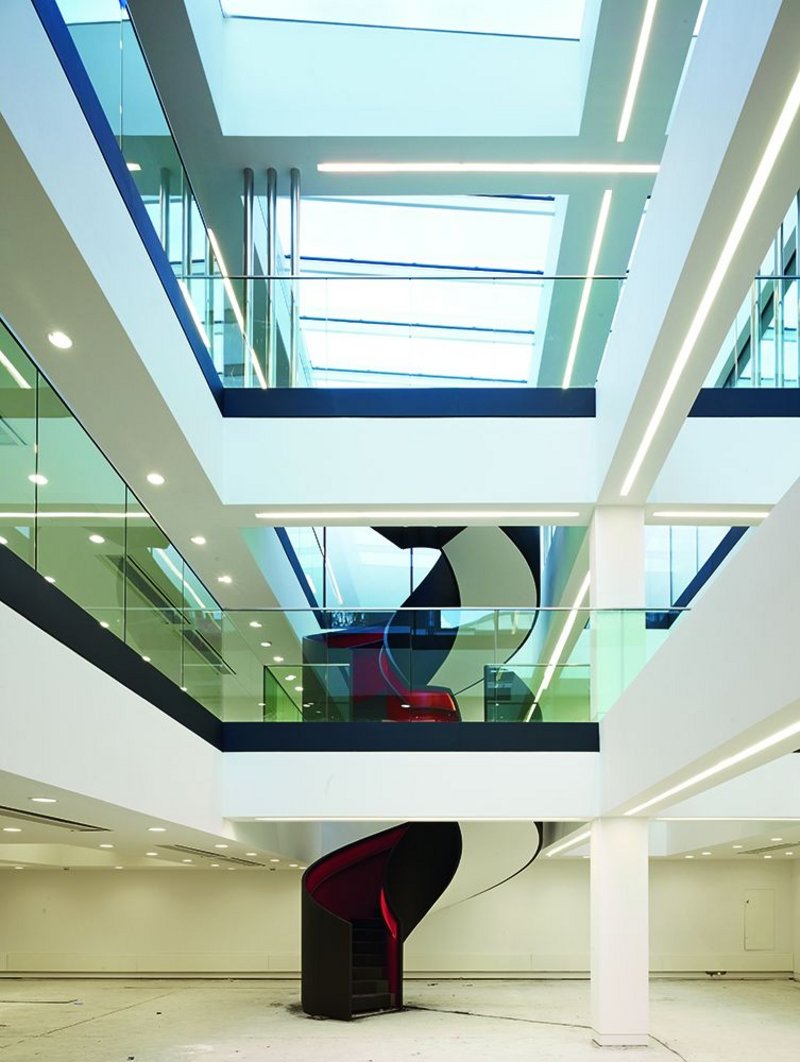 The existing structure allowed a good sized atrium to be cut through the floor slab. Putting three columns in each position ensured they were as slender as possible. Credit: Tim Soar

Inside, chilled beams that had long since been plastered over were barely functioning. Archer does not regularly use chilled beams but likes any technology that can keep a building cool without using energy guzzling fan coil units. Archer Architects left the beams standing proud in the ground floor canteen with the rest of the services which sit exposed in the ceiling void. He is proud of the building’s hard-won BREEAM Very Good rating – not bad, he says, for a reused old building. 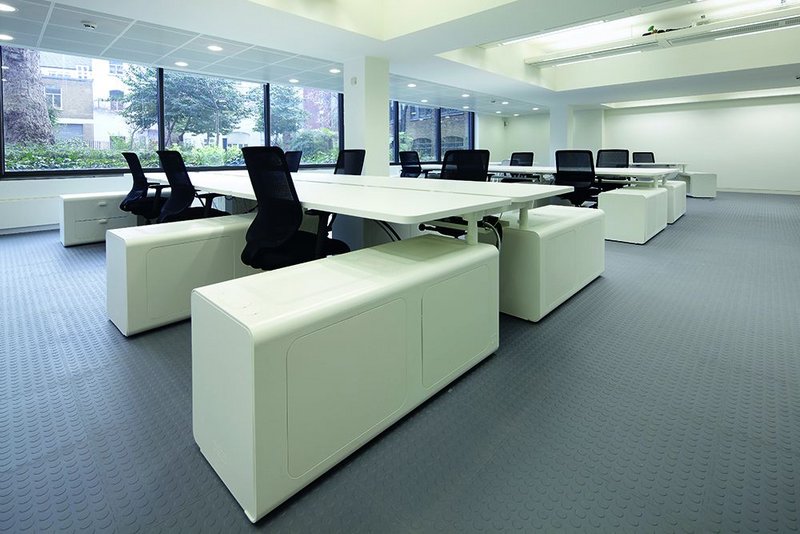 Storage and style were critical in the new desking system. Credit: Tim Soar

One move dealt with both the darkness in the north-west corner of the basement and the issue of finding the front door. Archer Architects took over half the square to the front of the building and built a small glass pavilion extending out from the original structure. Outside the upstand is not of red but of mirror panels, red with reflection and clearly proportioned for the spandrel panel dimensions of its older neighbour. To the right of the entrance desk, Archers cut the floor slab away to make a two-storey atrium dropping away from ground level. Three clusters of three columns were calculated to avoid a more heavyweight structural solution. Clad in stainless steel they give an extra shine to the space. Under here are the training and show rooms that allow displays to be trialled. You are led down to them by a helical steel staircase, red on the inside, white underneath, which arrived in two pieces to be lowered into place.

Archer Architects was lucky that Kurt Geiger also engaged it for fit-out. Somewhere between design workshop and high end creative studio is the feel of the rubber floors (actually rubber-style floor tiles for ease of access) and the pinboard-faced storage in white chipboard. Through Workform Environments it procured the elegantly organic Beta System from Tecno designed by Milan-based architect Pierandrei Assocciati with long curvy drawers of storage now as likely to be stuffed with heels as with folders. It has also brought in the surprisingly spongy Club sofas from Quinze & Milan. The patented QM Foam which they are made from is the result of the chemical reaction between polyurethane and different layers sprayed onto it which gives a water-resistant compound – it looks hard but is unexpectedly springy. On the top floor where the directors’ rooms follow the perimeter, each has imparted their own character through stylish furniture.

One of the few remnants of the original design that has not been seamlessly absorbed is the stairwells where the tall narrow doors, blockwork walls and narrow square section handrails speak of a different time. But for Kurt Geiger and Great Portland Estates this is a thoroughly modern building. 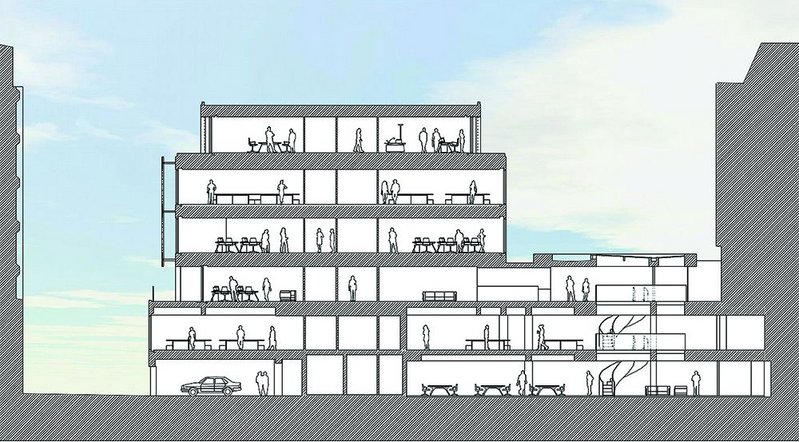 ‘Retail’ spaces for trialling displays in the basement, a small photograph studio tucked into the centre of the plan and a management floor at the top of the building, plus plenty of offices.

BLINDED BY THE LIGHT

Almost 3500 oval-section, extruded aluminium, tubular louvres create an external shading structure, across the third and fourth floors. Each measures 51mm wide by 40mm high, with a span of 1.8m. Fixed horizontally, they are grouped into 47 vertical stacks, each measuring almost 8m in height, writes Levolux.

The pitch of the louvres in each stack varies. At high level, they are packed tightly together, with a pitch of just 60mm, but the pitch increases incrementally to 480mm at the centre of each floor. The ‘waves’ of louvres running up the building produce the optimum level of shade for the second, third and fourth floors, while maximising daylight levels and giving occupants good outward visibility.

The fifth floor gets the most sun. To help maintain a cool, comfortable environment for its occupants, 53 automated external, motorised tensioned roller blinds from Levolux were employed at high level, around its perimeter. 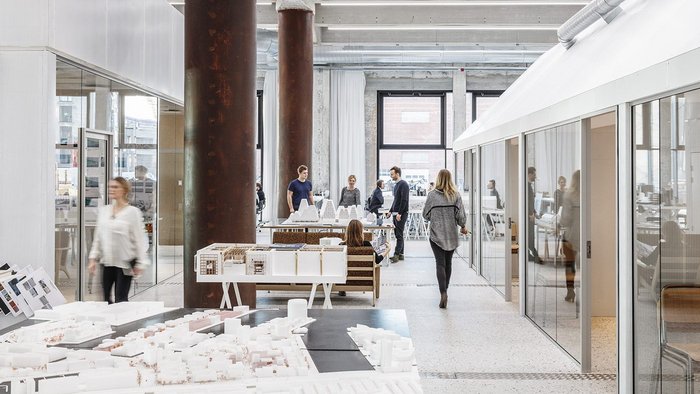