Tonbridge School, the independent boarding and day school in Kent, has a fine patchwork of buildings dating back to the 18th century and encompassing everything from neo-gothic to modernist styles. The latest campus improvement project – BDP’s £3.6 million refurbishment of the Smythe Library – gives a contemporary overhaul to a building designed by William Holford back in 1962.

‘The school has a tradition of building on its history rather than sweeping it aside,’ says BDP architect Daniel Walder. ‘The library refurbishment was very much about striking a balance. We wanted it to be contrasting but harmonious, and tried to pick up on the tone of the original building.’

There was a pressing need to upgrade the library to accommodate a greater range of settings more suited to contemporary study needs, and also to provide extra space in response to rising school numbers. When the library opened 55 years ago, there were around 500 pupils. Now, there are nearer 800.

Unlike many of the buildings at the school, the Smythe library was not listed. It faced – and formally addressed through its nine bay composition – the school’s Edwardian chapel which was rebuilt in 1995 after a fire. The west elevation faced the impressive school playing fields, although a full height stained glass window prevented views out. The library itself occupied only the upper two floors, with classrooms at ground floor level and storage in the basement. 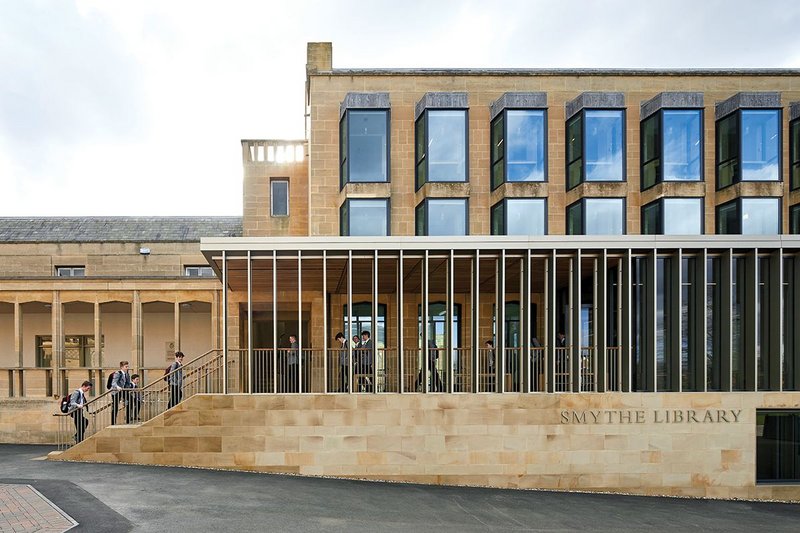 The north elevation formalises the entrance sequence and focuses across to the school chapel. Credit: Hufton + Crow

The school wanted library space for collaborative learning and a greater variety of study spaces, a challenge given its narrow – 8.3m – width. The boys themselves had ­expressed the wish for more quiet study space. Internally, the double height library incorporated a mezzanine level and had restricted views through the space because of tall, fixed bookshelves that hampered light penetration and flexibility. Vertical circulation was inadequate. A further complexity was the various floor-to-ceiling heights of 2.2m, 5m and 2.3m (upper two floors) of the original building.

When BDP first became involved, some members of the school community favoured a newbuild rather than refurbishment to address these needs. ‘We were able to convince them to refurbish the Smythe library and build on the existing asset,’ says Walder.

As well as reworking and incorporating the ground floor teaching space into the ­library domain, the practice extended further down into the lower basement by lowering the slab by 450mm on the north. The lower basement – previously used for storage – now houses toilets and a learning support centre while the ground floor contains a library café and ‘innovation’ teaching room. A new entrance was added to the north and a circulation tower – the most significant external change – added to the rear south elevation. Views west were created with the removal of the stained glass window.

‘Trying to tie it all together as one library that was all suitable for learning required us to juggle the practical aspects with retaining the overall architectural integrity of Holford’s very formal design,’ says Walder.

The concept of the cloister as a place not just for circulation but for meeting and socialising was central to the project. The library building is reached by a cloister that originally extended into the building at ground floor level. As part of the refurbishment, this area has been annexed into the library’s ­reconfigured ground floor spaces. However, the cloister idea was re-interpreted in a new lobby alongside the original cloister that forms the ground floor of an extension to the north. This is articulated by vertical anodised aluminium fins, with steel columns behind. To the south, the new 13.5m high circulation tower is conceived as a ‘vertical cloister’ containing both a lift and a timber staircase within its 5.6m deep, 7.2m wide space.

Both extensions are clearly designed to present as contemporary interventions.

‘It’s appropriate that this building reads as something that could only be done today,’ explains Walder, referring to the school’s stated belief in both ‘respect for tradition and an openness to innovation’.

The south extension spans the central three bays and – like the north lobby – uses a Kawneer AA100 dry glaze facade system. Anodized aluminium fins create a clear vertical rhythm and continue uncapped beyond the parapet line to give the feeling of reaching towards the sky. 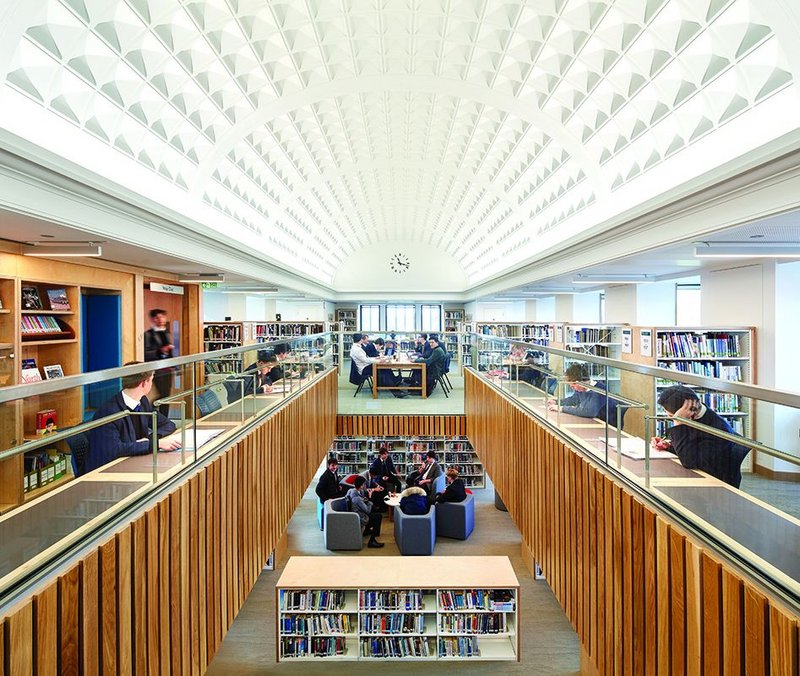 The old coffered ceiling has been rejuvenated in its new context. Credit: Hufton + Crow

Extensive glazing of the circulation space contrasts internally with the warmth of the oak balustrades, panelling and staircase while iGuzzini lighting pendants in the void behind the lift give the space a hint of Alvar Aalto. ‘The timber balustrades are really ­robust and feel as if they’ve been there for 100 years,’ says Walder.

The circulation tower’s generous dimensions allow the incorporation of benches for people to sit and chat on and, tucked away behind the bottom of the staircase, the rather more popular cluster of beanbags.

The tower was also an opportunity to ­address ventilation issues by creating a stack effect to pull air through the building. The extension has already had the knock-on effect of a greater use of that part of the school grounds, with a small amphitheatre created for outdoor lessons or performances.

In the main library space, the key change was the alteration of the mezzanine to make better use of the upper level. BDP extended the mezzanine with the addition of new steels to the cantilevered structure to create an enlarged study floor with built in desking overlooking the lower level. Mezzanine balustrades were replaced with timber cladding to enhance acoustic performance. The distinctive fibrous moulded ceiling was cleaned, painted and retained with the addition of new coving and inset lighting.

Another important change was the replacement of all the full-height fixed book shelving with lower, 1,500mm high bookshelves on both levels. These allow better views across the library and more light ­penetration throughout what had been a rather dark space. A variety of loose seating enables different study formats, both group and individual. At the west end, a new pull down screen gives scope for projected presentations.

BDP also designed built-in perimeter joinery in birch-faced ply, including an inset waterpoint and a single, snug seat as well as shelving and display space. In a nice bespoke touch, the joinery incorporates CNC-cut pictograms to denote the waterpoint or direct to the staircase etc.

The library’s original bay windows were upgraded using Schueco Janisol Arte, chosen because its very slim profile emulated the original Crittall steel windows that were set within timber frames. The transom, which related to the height of the original fixed desking in the bay, was removed to enable a full height single bay window. New desks and a radiator were installed in each bay.

Soon the rejuvenated library will be followed by another addition to the campus – a £13 million science centre, also designed by BDP and due for completion in 2019.