Continuing our series on retail and hospitality, Robin Livingstone explains how the practice worked with the client to establish a suitable purpose for the site in Edinburgh that would win planning and retain as much of the existing building as possible

Who is the project for?
The project is for client developer and contractor Dan Multon of Edinburgh MI. The site is a former public convenience that was built as a part of a series rolled out over the city during the 1980s. It had been a tollhouse for the neighbouring bridge. Multon bought it from the local authority when it came up for sale and approached Fraser/Livingstone as we had worked together previously.

What was the client’s brief?
The site is very constrained, limited to 60m2, including the existing building, steps and ramp. The Water of Leith borders the north, there are roads on the south and east which are part of Cannonmills junction, known for its clocktower, and a row of prominent trees to the west.

The project was consequently about discovering a brief with the client that would win planning approval and be deliverable despite restricted access. The client wanted to retain as much of the existing building as possible. The ground slab is effectively floating on a blockwork substructure not far off water level, so the idea of retaining it was about keeping costs down. Going up by a single storey was the only option.

In terms of function, a house, office and restaurant were all considered with the client ultimately deciding that a high-end restaurant for 50 covers would work well in the prominent location, and allow it to adopt the identity of the building and site for its marketing.

We proposed creating an upper pavilion cantilevering over the existing toilet block as much as possible, between 600mm and 1m, on the riverside. The building would retain the ramp to the lower ground floor, meaning this floor would be accessible to wheelchair users. But to get this through building control, the lower floor had to have all the services that were provided for the upper level. 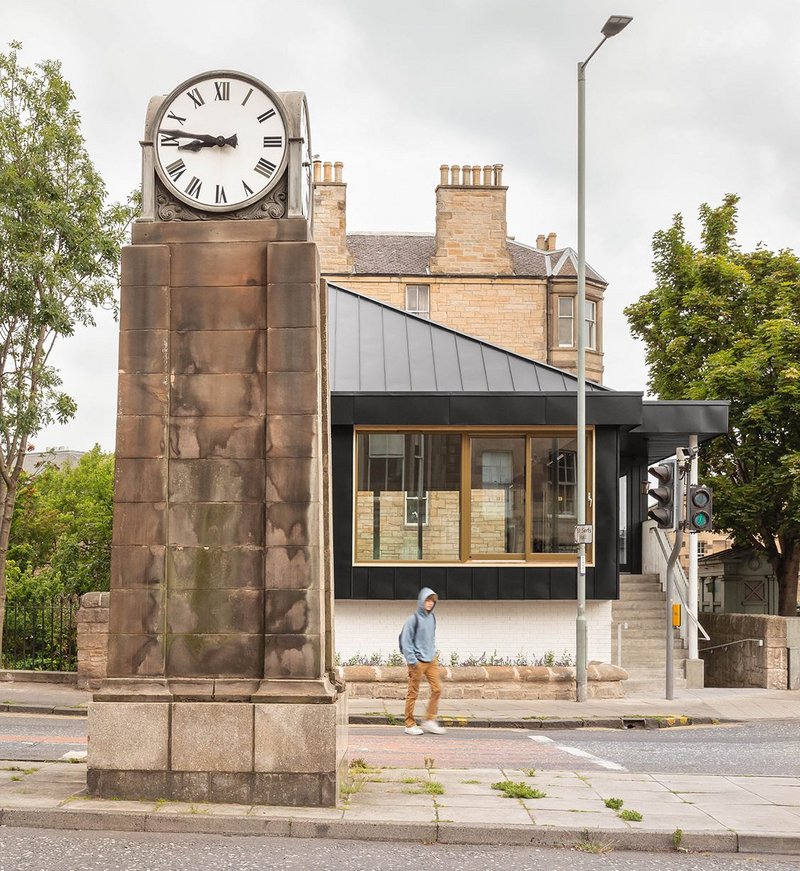 What was the existing building like and what work have you done to it?
The existing building has been adapted. The internal partitions and roof were removed and the slates reused on another of the client’s projects. The lower ground floor had been very enclosed, so the team made openings. These were restricted by flood risk levels so they are slightly higher off the floor level.

The upper pavilion sits on the existing lower level and is made from lightweight materials to minimise loads on the existing slab – steel frame filled with timber infill. We did explore using cross-laminated timber, but it would have been heavier and costlier, as well as being more problematic to construct on the small site.

In terms of orientation, a single tree on the road junction corner dictated the arrival point for visitors, allowing them to enjoy looking at it. To the south, a window looks on to the clocktower, while the north opens to the water. A trapezoid rooflight faces south-west. Meanwhile, down the external ramp to the lower level there is a new 1,400mm-wide terrace for outdoor dining.

What was the planning situation?
The project is located at the northern end of Edinburgh New Town conservation area, which has many proactive community groups. It is a tricky context in which to build a contemporary building. There was pressure from the planners to use stone and design a traditional building. Our approach was to use pre-applications to explain how we proposed to unlock the site and make it deliverable.

We had to make a case for using steel and designing a modern building. To get this through planning involved a lot of research into buildings around the centre that use metal, mainly house extensions. Then there is Michael Laird Architects’ 1991 glass dome of Tanfield House on the other side of the river, which you see coming down the hill from the New Town. The black cladding was chosen to contrast with this, and almost disappears between the trees, especially at night when it becomes more about the glow of the large openings.

Explain the external treatment of the project?
The upper part of the building, including the raised ground floor and roof, is clad using a black Swedish steel cladding system. The team had investigated using timber but had concerns about the proximity to the water as well as to the trees and pollution from the busy road intersection. Zinc wouldn’t have been able to wrap under the soffit without longer-term spalling. Steel was selected to be robust, weather well and be lightweight for construction. This system is Greencoat so it has a painted surface that can be patched up or have panels replaced.

At the lower ground level, we retained the existing brick, painting it white to contrast with the black. The gutter had been designed as a secret gutter, but because of the cantilever it was difficult to find how to bring the downpipes down. Instead, it is pronounced and wraps around all four sides like a datum, joining into the canopy above the entrance. The surrounds for the primary windows are timber in olive golden bronze to give more character and warmth to the wider dark and light scheme.

How have the interiors been designed? What was Fraser/Livingstone inspired by and was there a theme?
Internally, the lower ground floor has dining space, which is accessible to all, as well as the main catering kitchen, which is open to the space, and WCs. These facilities tap into existing drainage. There is also an internal spiral stair which is on the axis with the tree outside the entrance and positioned under the trapezoid rooflight so light filters down into the lower level.

A restaurateur had been lined up from early on but, because of Covid, the tender went back to market and a new restaurant group called Dine was brought in. They did the interior fit-out, choosing dark walnut cladding for the back wall and built-in drinks area and bar. The rest of the layout is open plan with a timber floor. The company also specified its furniture. The challenge was to arrive at an interior fit-out that ultimately sat with both parties.

As a hospitality project, what was the biggest challenge you faced?
There was a lot of discussion about where the kitchen should go. The initial restaurateur wanted it open on the first floor. Dine wanted it open too but downstairs to create more covers upstairs, so it moved up and down multiple times. From a design perspective, it was necessary to alleviate concerns from environmental health with regard to ventilation. In the end, the team decided to make a feature out of the flu by making it like a chimney, giving it a domestic feel that is more fitting in the surrounding area.

How has the project been received? How has it helped the client’s ambitions?
The client is delighted and is getting a good rent on a long lease. Dine is also delighted. The restaurant opened in early September and already had requests for 2,000 bookings. Angus Robertson has written about it for the Edinburgh Evening News. The practice is going there for its Christmas night out. We see it as a type of retrofit scheme. It has already won an Edinburgh Architectural Association small project award. We are also exploring another separate opportunity along the Water of Leith with Dine and the developer.