In the latest in our series on retail and hospitality, Piers Taylor talks about how his practice added a separate building to provide a limestone yoga studio amid the listed buildings of the Newt hotel

Who is the project for and what was the client’s brief?
The project is for the Newt Hotel in Somerset. Invisible Studio was first approached by the Newt in 2016. This yoga studio is the third of four buildings for the client. The first was a modest 100m2 gym set in a walled garden. The second was a smaller folly designed as an exhibition space with a focus on habitats and including an apiary for bees. That building took a long time to fit-out because of Covid-19 so, for nine months, the hotel used it as a space to do yoga and loved it. They enjoyed the top light and that’s how and why they approached us to design a separate yoga studio behind the gym.

The brief was to design a discreet building of the same size that had many of the qualities of the preceding building but they also wanted it to look at the sky and be immersive. It had to be part of the same family of buildings. It all happened rather quickly. We were commissioned at the end of 2020 and it opened earlier this year.

What was on the plot previously and what have you created?
The plot is immediately behind the gym on the grounds of the hotel, just 1m away. It was an overgrown sloping area with self-seeded scrappy trees like ash and sycamore. 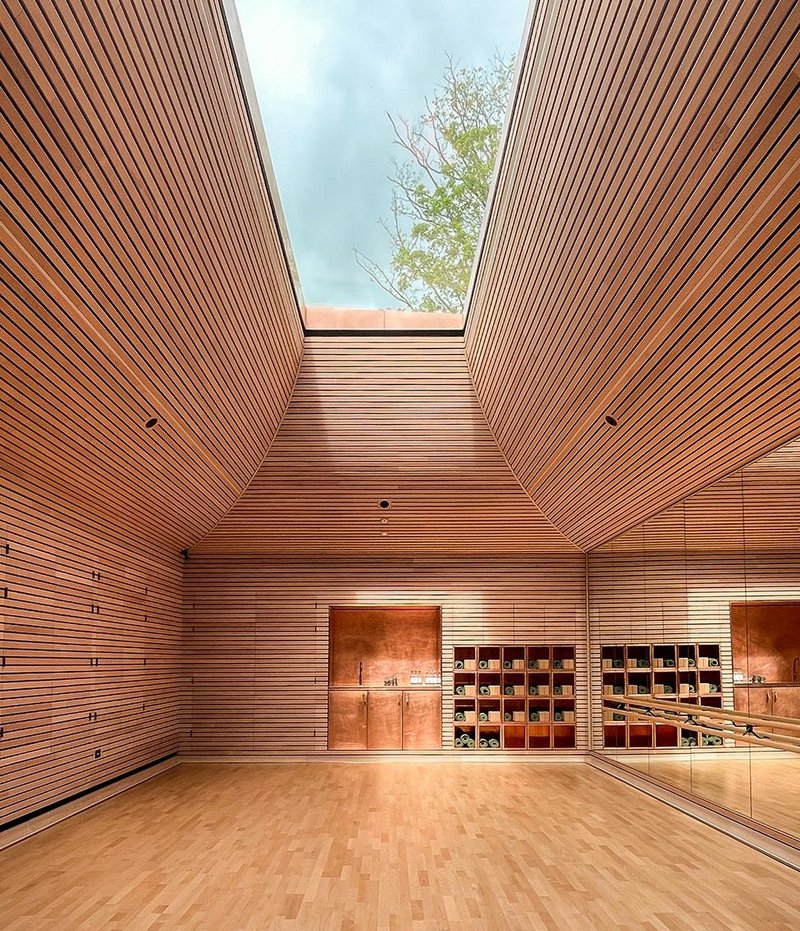 Part of our strategy, as it has been for all our buildings at the Newt, was to involve Martin Harradine, director of AZ Urban Studio, as a planning consultant. It is a complicated place to design a building. First, it was about presenting the economic case to show the building is needed to support the hotel. Then it was about demonstrating that it wouldn’t be harmful to the listed buildings. We are thorough in presenting the case and making sure the case officer understands it. Then we are left with the reserved matters – details that we can mitigate against. For example, the planning conditions stipulated that the 12m-long roof light had to have a blackout blind.

Explain how you treated the exterior?
The site sits on the same limestone seam as Bath, but when it runs south of Bath it is reddish rather than honey-coloured, like the main building at the Newt, Hadspen House. We wanted to make the building materially rich, strong with a permanence and durability. For the yoga studio, we used the same exterior materials we had developed for the gym: rammed stone. The stone came from the estate’s quarry and was crushed into an aggregate, then dry mixed with water and a small amount of cement as a binder before being rammed into a 150mm formwork in 600mm sections. The roof is copper shingles, like those used on the Beezantium, to create this family of materials, with a similar rooflight form at the apex.

How have the interiors been designed? What was Invisible Studio inspired by?
The copper carries on inside, with copper detailing in the kitchen and yoga mat storage area. Elsewhere, the space is lined internally using beech as well as a beech sports floor. All the building’s performance aspects – lighting, acoustics, air handling – are contained and hidden within the slatted wall panels. The space is designed to be very immersive and calming; guests are held in this honey-coloured environment of timber and copper.

As a hospitality project, what was the biggest challenge you faced?
Technically, the rammed stone is very tricky – it sits between low-skilled and highly skilled. Not many people use stone in this way so the task is partly about teaching a contractor how to do it.

In terms of specific challenges on hospitality projects, hotels are tricky. At the Newt four or five architecture practices have each done several buildings. The challenge is how to provide an authentic, consistent experience. For the yoga studio, we wanted to make it intimate and personal. The journey to the building is part of that – it is hidden behind the gym, you need to wind through the garden to discover it. Then when you go in it is surprising; you do not expect the cathedral-type space.

The project is exquisitely detailed, which is not my work, it’s Tara Breen’s in the practice. The site agent also ‘built’ it all in his head so knew it all before it began. It is the same contractor we had used on the gym too.

How has the project been received, how has it helped the client’s ambitions?
The building has been received really well. It’s always super busy – so much so that it is hard to get a time scheduled to sort out the defects. As a dedicated space for yoga, the building complements the Newt’s other spaces, such as the pool and gym. It’s a hotel you go to for a quasi-retreat. We are now doing our fourth project for the client: a model farm that will produce its own food. That is on a completely different scale.

Isabelle Priest was speaking to Piers Taylor of Invisible Studio