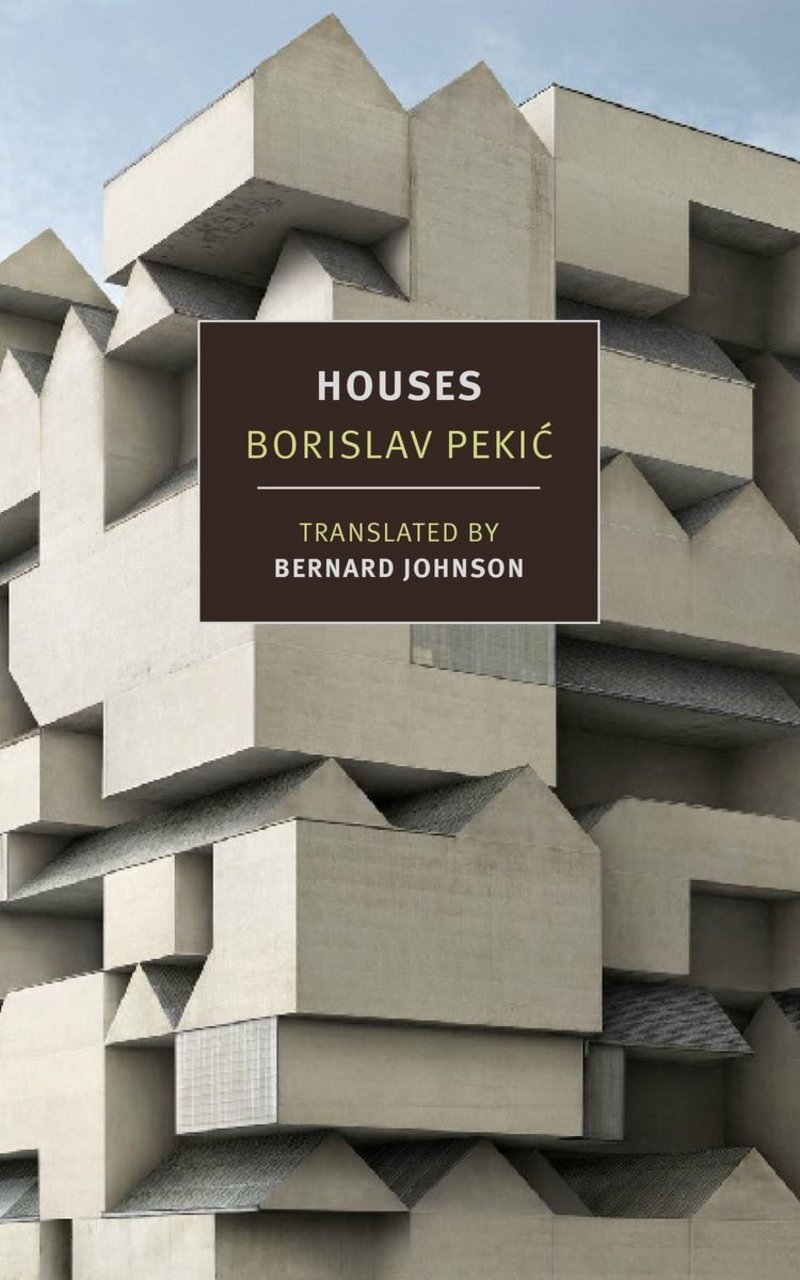 If you are ever offered the opportunity to visit Belgrade, seize it. The outcast obscurity it has experienced since the Balkan wars of the 1990s now unfairly hides a beautiful, cosmopolitan city that should be firmly on every architect's European to-do list. Who knows – depending on how the Brexit negotiations go, and the machinations of the global currency markets, it might be the only city-break destination we can afford.

It's really two cities for the price of one. On the east bank of the Sava river is a charming, storied, eclectic southern European capital. And on the west bank is New Belgrade: the most perfect realised example of a socialist planned city outside the former Soviet Union. If Edinburgh is the “Athens of the North”, Belgrade is the Edinburgh of the South, only here the Enlightenment is jet-age brutalism.

Borislav Pekić's Houses is a book that sprouts, flower-like, from the disjunction between those two cities. Written in 1968, as New Belgrade was rising from the ground, Houses is an acknowledged classic in Serbia, but like its author is hardly known in the West, despite the fact that Pekić spent the 1970s and 1980s living in the UK (one of his later novels is set in Heathrow airport during a rabies epidemic). It has now been reissued by New York Review Books in a typically handsome paperback.

It takes the form of the memoirs and last testament of Arsénie Negovan, a member of a sprawling family that appears in numerous Pekić novels. This Negovan is a splendid comic creation: a housebuilder and self-made man turned fantasist and deluded recluse. Negovan loves houses. His love for them far exceeds an architect's fascination or a landlord's care. He gives them girls' names and his descriptions of them are more Fifty Shades than Pevsner: ‘My last born, the lovely Greek Simonida with her fine, dark countenance, her milky complexion beneath deep blue eyelids, and her full-blooded lips pierced by a bronze chain, African style.’ In his introduction to the new edition, the critic Barry Schwabsky compares Houses to Lolita, if you ‘[s]ubstitute apartment buildings for nymphets’, and that's about the measure of it.

My last born, the lovely Greek Simonida with her fine, dark countenance, her milky complexion beneath deep blue eyelids, and her full-blooded lips pierced by a bronze chain, African style

From this passionate – not to mention deeply sinister – infatuation, Negovan has evolved a unique and bizarre theory of property ownership. He believes himself to have discovered a pure form of ownership, far exceeding the mercenary claims of banks and other landlords – a form of total possession that he puts in mutual, loving terms, but which is fairly easy to read as the creepy self-justifications of a stalker or abuser:

And so on. But Pekić's brilliant twist on Neogvan's obsessions is to make him a recluse. For more than a quarter of a century, Negovan has been a recluse, refusing to leave his home after a violent and confusing incident at a riot in 1941, just as Yugoslavia was drawn into the Second World War. Since then, he has kept watch over his property empire through binoculars out of an ivy-framed window, enjoying his houses at a remove, as architectural models and pins on a large surveyor's map of the city. Events since the withdrawal of the German occupiers have passed him by. He has noticed the shining new city appearing on the far bank of the Sava, but assumes it to be the work of less inspired developer-landlords, not communist central planners. His business affairs have been managed by his long-suffering wife – who has been concealing the fact that he no longer has any business affairs. In 1968, he hears by chance that the beautiful Simonida is threatened by demolition, and slips out of the house to discover the truth – discovering, of course, far more than he expected.

Negovan believes himself to have discovered a pure form of ownership, far exceeding the mercenary claims of banks and other landlords – a form of total possession that he puts in mutual, loving terms, but which is fairly easy to read as the creepy self-justifications of a stalker or abuser

Houses is told entirely in Negovan' voice: multi-lingual, anachronistic, deluded to the point of wilful blindness. Though dense and digressive, as the landlord's trip through the city prompts reminiscences of the events that led to his seclusion, it's entertaining and fascinating, and the old man's fractured impressionistic memory often soars: 'Here come the first bombs, They're falling slantwise. They seem to come from nowhere, swarming down magically out of the white honeycomb sky. Black holes open in the cloudless air.'

As expected from such a fetishistic architectural eye, the descriptions are marvellous – '... the bitter smell of stale medicines, unaired eiderdowns, decaying clothes, parchmentized documents, and other petty reminders of decay: in a word, the intangible scent of misfortune' – but it's the sinister comedy of his 'relationships' that serves up the best lines. A speech by a communist denouncing the crimes and aggressions of the Nazis only stirs in Negovan musings on the domestic architecture of the countries and cities mentioned. Here, you must recall, he is talking about a house: 'Niké was far too dignified to make use of so crude a means as a blow on the head with a blunt instrument; if it had occurred to her to commit murder, she would most probably have poisoned Stefan by emitting toxic vapour from her otherwise benign wall coatings.'

Another house,Katarina, does in fact cause a death – Negovan's response is a masterpiece of sensitivity: 'I hurriedly sold her, taking care to make but little profit on the sale.'

Pekić's genius is to explore, via these ramblings, the nested fictions that rest at the heart of the idea of “ownership”: legal, moral, spiritual. What is it to own something? Nothing, there is no there there. The world carries on. In a way we are all Negovan, wrapped up in the same delusion, among the meaningless tax receipts and defunct maps – but because we all are, the collective fiction becomes our reality.