If the architecture of the new sports & sciences centre seems stuck in a bit of a time warp, the client is even more so

I zone out. When I come round, I find myself in what can only be a Remembrance Day service. A schoolgirl is standing before a teenage orchestra singing Vera Lynn’s (There’ll be Bluebirds Over) The White Cliffs of Dover. On the wall behind, below a hundred wispy pink fabric pendant lights, a huge screen is showing slow-moving drone footage of England’s south coast against a glorious blue sky with twinkling waves and gleaming cliffs. Former Conservative MP Nicholas Soames, Winston Churchill’s grandson but more recently notable as a fairly pro-EU thorn in Boris Johnson’s side, is coming up to speak. I have heard them and us analogies in abundance – an object from the Continent, a brooding spaceship, a strange Dutch visitor – as well as a dose of stereotypes about the Dutch being single-minded and architects all dressing in black roll-necks.

I’m at the open day for OMA’s anticipated £55m Sports and Sciences Building for Brighton College, to which the architect has enticed an array of journalists from all over Europe. We’re two weeks from MPs ratifying the UK’s Withdrawal Agreement from the EU and I’m perplexed. How have stories from the Second World War, such as the seaplane containing Dutch ministers landing nearby in 1940, been woven into this supposedly futuristic building’s narrative? It’s weirdly nostalgic. I get the impression it’s not how the architects might have sent off a radical sports and sciences building either. Sprinter Colin Jackson, who although retired is arguably more relevant than Soames, is standing silently in the crowd, waving only on request. The complex is declared a departure from the ‘set of polite buildings’ (by British architects) the school had completed when this one was commissioned after a competition in 2014. But with this backward-looking display about Britain, what might we expect? Listening is causing me an existential meltdown. That the next song is from Rocky doesn’t help. 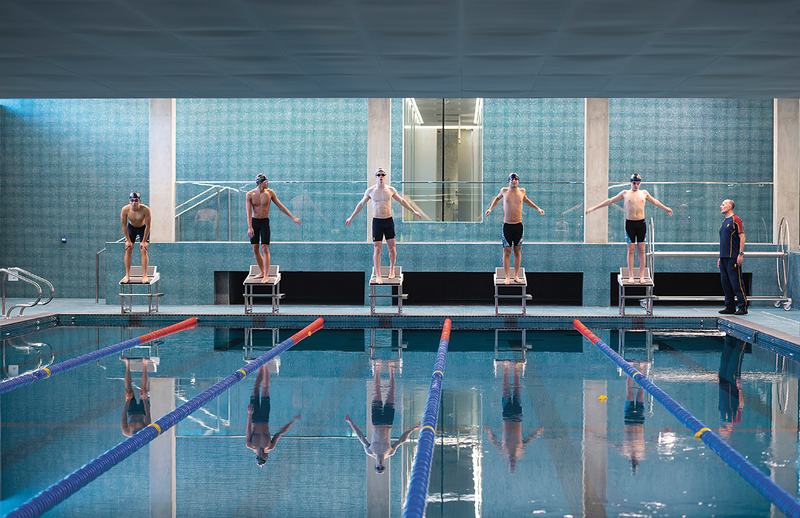 The ‘lido’ or swimming pool on the lower ground level. Credit: Liz Finlayson-Vervate

OMA won the project, says headmaster Richard Cairns, because the school wanted a sports building with lots of glass and the British architects it spoke to said that couldn’t be done. However, its chief architect Ellen van Loon tells me that it emerged that it was the only practice which took the school’s original three-part brief – one block of generic classrooms, the science department and all sports facilities – and combined them into one mega multidisciplinary building, in that OMA way. The project lost the general teaching spaces to scale back its height, which van Loon felt was too ‘colossus’ for its context, but the rest remained. The building is a 120m long, 23m wide, 14m high rectilinear form. Science essentially sits on top of sports, but they do slip past each other; views carry through and between. ‘You can,’ as Cairns says, ‘never be certain which department you are in.’

Brighton College was founded in 1845 and is located east of the city centre in a primarily 19th century white-stuccoed residential area. It occupies a rectangular plot, with the extended gatehouse facing the road to the south. Most of the buildings cluster in an increasingly compact collegiate fashion at this end (the school estate is undergoing an epic transformation with 11 new buildings in 11 years). Behind them, dug into the hillside, is the playing field – a large levelled area with terraced Brighton townhouses following the topography on two sides. OMA’s complex is the only teaching building that crosses into the sports field. It stands alone, stretching along the western side, replacing a 1970s and 80s sports hall and pool.

‘The school added many buildings in the 1970s,’ explains van Loon. ‘But the quality was not very high and quite quickly done. Thinking in education was also different. Those were simple buildings with corridors, stairs and classrooms either side closed off so you couldn’t look in. Education now is more two-way, with kids learning from each other… In science, for example at Novartis’ campus, knowledge needs to be cross-disciplinary. Biology, physics, all kinds of things are involved, and this more collaborative work mode demands other kinds of buildings.’

This is OMA’s first secondary school sports building. The brief required a sports hall, gym, pool and a 25m running track for speed training. The science department was incorporated to free space next to Eric Parry’s Music Recital Hall where a huge performing arts centre by Amsterdam firm krft is planned. Van Loon wanted direct teaching in classrooms and informal space for self-learning too. Corridors become breakout spaces, entrance steps become an outdoor auditorium or area to hang out, and the roof a space to watch matches and the only point in the school with a sea view. Transparency was crucial in the relationship between indoor sports and those on the field, as well as with the classrooms and laboratories.

‘I liked science at school,’ says van Loon. ‘I wanted people to walk through the corridors and see experiments taking place in the classrooms to encourage curiosity as well as uptake in them, particularly among girls.’

In form, OMA wanted a ‘contextual’ building. It experimented with scale, looking at the residential terraces, interpreting each as a cell. The building had to be long and fit with the flat roofscape of the terraces opposite as well as the stepping roofs elsewhere in Brighton. Externally, each function – sports hall, gym, classroom – is expressed as a unit, glass bounded by charcoal grey GRC cladding. This tactic made planning easier.

The approach to the building is towards the built-up end of the campus and bridges the one-storey difference with the playing field by creating two entrances. The first is a slow stepped concrete ramp that scoops people up to a viewing platform and into the atrium where the opening event took place. The other is an inconspicuous doorway at lower level that leads to the changing rooms and the swimming pool on one side of a wide corridor. Upstairs, rooms unfold around spacious circulation intended to effortlessly draw people up from the atrium to the champagne terraces on the roof and those sea views.  Further on, still on the ground floor, past a stair to the science department above, an avenue separates the 25m running track from a gym and exercise studio. The multifunctional sports hall occupies the full width at the end, where the outdoor field provides a backdrop for indoor activities. Doors opening between the two allow their functions to overlap. From the gym you get glimpses of the pool below.

Upstairs are van Loon’s spaces for creativity – corridors that are break-out spaces and exhibition spaces, as well as the biology, physics and chemistry classrooms and laboratories. Everything is high-tech, every material is manmade, sharp. The place smells rather toxic. To the third floor there’s another stepped ramp that gives the building its external expression of stepped cells to mimic the townhouses. It was intended to be sloped, but became too steep, so three classrooms are not wheelchair accessible. I’m promised the school has a sophisticated room system to accommodate disabled pupils or redistribute them should someone become temporarily disabled, yet it is an odd decision.

On the semi-accessible roof is another, two-lane 50m running track, squeezed between railings and a roofscape of plastic light domes. The physics extractor vents are disguised by a rooftop bar and there is artificial turf instead of the original planned grass. It’s the ‘Brighton bling’ that the school wanted, to counter an over-austere look it was afraid its Dutch designers would bring – along with interior choices such as the seaside stripe sofas, pebble seats, light fittings and wayfinding words from ‘pool’ to ‘lido’ and ‘cinema’ to ‘kino’ that grate with the architecture.

That’s not to say the architecture is spot on. The entrance steps are heavy. The ‘dancing columns’ and greyness under the cantilevered portico are bleak. And I don’t buy the reference to stepped terraces as an excuse for inaccessible classrooms. The building looks cumbersome from the field, especially compared to the amiable scale of the campus elsewhere, but I don’t share other journalists’ dislike of the street elevation – it mostly neighbours an industrial park.

Who’s at fault? It’s difficult to know. In many ways this is more of the same from OMA. So little changes conceptually it could have been built any time in the past 20 years. It lacks the firm’s usual magic, but it does provide fantastic facilities (the cinema is particularly good) and is bold for a British private school, although the state sector has been doing the all-in-one thing for years. The running track must remind you of Zaha Hadid’s Evelyn Grace Academy, even the zigzag angles. Perhaps OMA didn’t want to deploy its utmost sophistication here, and judging by the sentimental, backward-looking opening event, who could blame them? Some nuances of public schools are no doubt lost on the architect, but one Dutch journalist told me it all looks Harry Potter to them. What does it say to be a foreign firm building in Britain right now?