RIBA International Prize nominee Philippe Prost's restoration of a mining village in Bruay is helping transform the area’s reputation too, as vegetation reclaims the once menacing slag heaps

When you’re driving south along the A1 from Lille in northern France, or coming from Paris in the opposite direction, there’s a moment when the relatively flat, uninteresting landscape recedes and suddenly you’re in a valley formed by mountainous slag heaps. Nothing prepares you for it. One minute there’s nothing, the next slag heaps are everywhere – all sizes, types and forms, conical, plateau, truncated and ‘modern’.

Thirty years ago, the sight might have caused rear seat passengers in the car to hunker down and hold on tight. The mounds loomed large and dark above the landscape and so did everything they stood for. Man’s activities prised nature from this place until they suffered the same fate. But today, greening at their bases, the slag heaps are the most visible remnants of a period in our social and industrial history whose passing people are just about coming to terms with. The fraught political ending that took place decades ago – strikes, unemployment and upheaval as the government closed down the then nationalised coal industry – has blown away with the coal dust and an appreciation of the people and places which enabled that history has descended, accompanied by a sprinkling of money and remembrance. 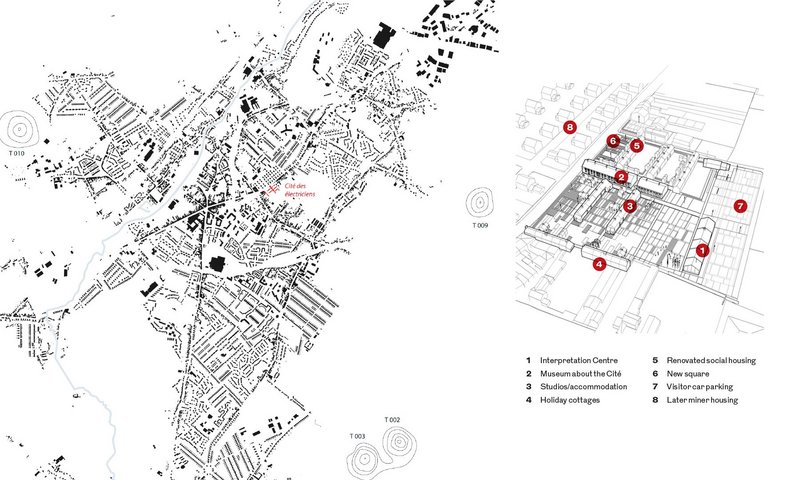 Map showing the Cité surrounded by other mining villages and multiple slag heaps, and site plan.

Now, when you cross that point on the motorway, it’s not just slag heaps you see, there is also a sign explaining you are entering a UNESCO World Heritage Site – a protected landscape status that most would have found laughable until very recently.

The bassin minier – valley of miners – as it is known, stretches in an arc 120km long and 20km wide from the Belgian border east of Valenciennes over the départements of Nord and Pas-de-Calais to the west of Béthune. It was awarded its status in 2012 as a cultural, evolving, living heritage. It’s not just the slag heaps (51 of the circa 350 are listed), that matter though, it’s the whole set-up – the urbanism, methods of construction, materials and ways of life that look so ordinary until you think twice about them.

Coal mining on an industrial scale didn’t begin here in France, but the characteristics that developed in this region are unusual and intensive. The huge mural in the new centre of interpretation designed by Atelier d’Architecture Philippe Prost (AAPP) in Bruay-la-Buissière  shows how from the 1720s deeper mines, advancing methods and greater volumes transformed a primarily rural landscape into an industrial one of pits, shafts, processing plants and worker housing.

Land was cheap so industrialists bought it speculatively to test for coal. If none was found, they would use it for equipment and ancillary buildings or housing for the vast numbers of people required to work in the mines, who came from all over the world. Buildings were mostly low-rise and horizontal because they cost less. Consequently in addition to the slag heaps the UNESCO valley contains 800 models of workers’ housing; 80,000 homes spread over more than 700 mining villages or estates. Most of them were made using the red clay from the companies’ land, fired using their own coal and designed by their own engineers.

AAPP’s interpretation centre is located in one of the earliest of these villages, la Cité des Électriciens, built by the Bruay Mining Company between 1856 and 1861. By 1918 production had reached 4.5m tonnes per year and the firm employed 20,505 people. But when the houses were built, most of the miners would have been former agricultural day labourers working farm to farm. Without alternative reference points, the architecture of the Cité was equally transitional – 43 low, long narrow houses of 30 to 50m2 in seven ‘barreau’ or terraces of four or five, some back-to-back, designed to accommodate families along with their chickens and rabbits.

‘We are at the first rung of the ladder,’ explains Prost. ‘This is the simplest type of architecture which has its roots in rural and agricultural buildings.’ Each plot had a garden for growing vegetables, a fruit tree and house with a coal bunker in the cellar, open living space on the ground floor and bedrooms in the attic. Other facilities – the bakehouse, latrines, washhouses and wells – would initially have been communal before private outhouses were built by the company to improve hygiene and thereby productivity.

Today people from outside the bassin minier view it with new curiosity and wistfulness. But as recently as 2008, in the film Bienvenue chez les Ch’tis, this Cité played the role of a depressed, sparsely populated town of outrageously coarse and uncivilised people, a comical send-up of how the rest of France stereotyped this part of the north. The pits closed in Bruay in 1969 (coal mining finished across northern France in 1991) and it was in a state of ‘extreme dilapidation’.

Yet the film became the highest grossing in France and shone a spotlight on what a unique and culturally significant place it is. By the time Prost arrived on the project after winning a competition in 2013, the last miner’s widow had just departed, and walls moved if you touched them.

The aim of the project was to restore the site to its early condition. Half of it has been reinstated as social housing by Maisons et Cités. The other half has become a type of open-air museum, which director Isabelle Mauchin says was conceived to communicate to locals the importance of the mining valley and why it has been awarded protected status. It is a gateway for visitors to the region too.

As the lauded architect of the Ring of Remembrance nearby, for Prost the project is therefore a memorial and rescue. The inhabited houses have been refurbished and extended to provide modern accommodation with low fenced gardens and a square to the road. The rest of the site is open to the public. The largest terrace of back-to-backs has become the museum of the Cité itself, its collection of artefacts showing who lived in the village and what life was like. Openings between the 10 houses create a series of linked spaces that recall the previous houses but give a level of continuity to the exhibition – photographs, audio, news cuttings, snapshots of the layers of wallpaper and lino that were found in situ when the project began. You can peek down the horrendously steep stair to the cellars and enter two bedrooms as they would have been, washed with green and ultramarine.

Elsewhere, the former miners’ houses have become studios, gallery spaces and accommodation for artists in residence, as well as five holiday lets. Here, again, the approach has been to knock multiple homes together to make bigger, more contemporary spaces.If ceilings had collapsed the spaces have been left double-height.

The only new building is the interpretation centre, which sits on the footprint of a temporary shelter to house refugees, built by the mining company during World War I  and destroyed by fire in the '90s. Volumetrically it is a replica of the larger barreau, constructed using lighter, more sustainable materials of today; wood, recycled denim insulation and glazed tiles. The design bridges inside and out, providing an open space that, Prost discovered, would not have been possible within any of the old terraces because of their fragile condition. The new building’s glazing repeats the rhythm of the houses opposite and its red glazed tiles transfigure the brick as a rainscreen. A reception cabin at the threshold playfully recalls the outbuildings.

Overall, from the exterior the project is masterful – faithful and inventive. The gardens have also been recreated by landscape designer FORR to demonstrate how miners used their plots, based on analysis of hundreds of photographs and intense research into the flora found, including dozens of grains brought by immigrants. The new centre feels very much of the red and black, clay and coal it was intended to evoke. The restor­ation transports you to an in-between time at the dawn of the industrial revolution in this part of France: semi-bucolic, communal, if portrayed quaintly.

However, when it comes to the interiors of the restored buildings, too much has been stripped away, joined together, plastered over, concreted and renewed. The buildings have lost touch with their previous lives and inhabitants; they have been sanitised into generic contemporary spaces. Surely the charm of renting one of the cottages is to live, just for a few days, like a miner may have done, a bit cramped but cosy? That cannot be undone, but the project is still an enjoyable, important and admirable one that raises the profile of the mining valley and shows there is more to it than just its slag heaps – a change of mindset that could be useful elsewhere. 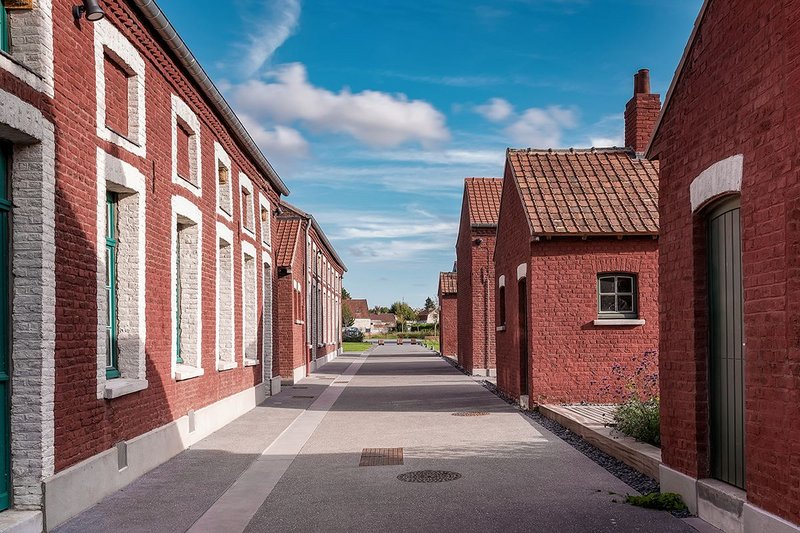 The outhouses (right) were added later. Each is a series of attached buildings with a latrine, washhouse and chicken coop.