Herzog & de Meuron has given the Royal College of Art a substantial, dramatic presence with its new Battersea Campus

Buildings designed by Herzog & de Meuron always have a sense of drama, in circulation, space or texture. Think of the grand Turbine Hall of Tate Modern, the dramatic stair and ramps of the Laban Centre, the twisting atrium of the shimmering Blavatnik School of Government in Oxford. On the 15,500m² new building for the Royal College of Art’s Battersea Campus in south west London the drama is in the large scale north lights and the offset planes as the floor plates, in the form of balconies, push out into the street.

The building reads as two. A tower and the studio building are for sculpture and ‘dirty digital’ (architecture remains at the RCA’s original campus in Kensington). It is planned for 500 students but large enough for 1000. As a graduate and research school the RCA has had the luxury of not playing the numbers game that dogs many university undergraduate courses. But this building is part of delivering on a planned expansion of students from just over 1000 in 2017 to 3000 by 2027.

The plot, just south of Battersea Bridge, once housed the RCA’s slightly dilapidated sculpture school, a petrol station and a couple of garages. There is no attempt to match that assemblage; instead the 97m facade is the frontage for a four storey studio block, in a textured but still unremitting English buff bricks. The brick extends around the corner of the block as a podium under the eight-storey aluminium-clad tower (the Rausing Innovation and Research Building). 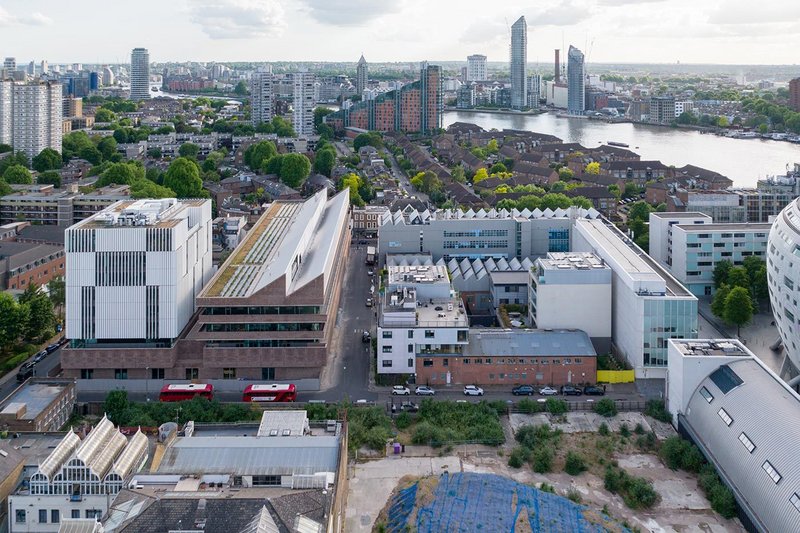 It feels like the puritanism of bricky New London Vernacular writ large, with more than a nod to brick sixties deck-access council housing, say by Darbourne and Darke. Or is it perhaps a development in the practice’s own tropes? From Herzog & de Meuron’s own output you could trace those pushing out planes to the stacked volumes of Actelion Business Centre (watered down here), and the brick bond to the Tate Modern extension (simplified here).

But while I might looking for such references, the only model that Herzog & de Meuron’s partner in charge, Ascan Mergenthaler, will admit to is the RCA’s original base in Kensington Gore, the Darwin Building (1961) designed by ‘Jim’ Cadbury-Brown with Sir Hugh Casson and Robert Goodden.

The other reference is of course the site itself. On the official tour with RCA vice chancellor Paul Thompson, the theme was permeability and community. There was an emphasis on the three ‘streets’ cutting across the block-long building, though that is more an organising principle than the creation of recognisable streets.

Two of the ‘streets’ are internal, although the ‘hangar’ – demonstration hall, gallery and gathering space – can be opened at each end with bifold doors; the concrete floor can take cars or any vehicle the RCA’s intelligent mobility group may want to drive in here. And it does follow the line of an old street. But the cut-through with greatest claim to being a street continues the route from Haworth Tompkins' 2015 Dyson and Woo buildings for the RCA and filters students through to a tiny courtyard and then onto Parkgate Street.

The building looks determinedly solid rather than permeable. But it does have windows at ground floor (perhaps at the planners’ urging, suggests its Greater London Authority referral). Some of these are obscured, offering glimpses of activity using hit and miss brickwork as a partial screen. Elsewhere they become shop windows for the college with large planes of glass, showing off digital fabrication robots. On these the brick surrounds remain uncut with teeth of projecting bricks, giving a sense of the weave of the textured bond at upper levels almost fraying at the edges.

On the ground floor are the hangar, workshops and assembly spaces. Above, in the studio building, the layout is more reminiscent of offices than education buildings; vast floor plates for studios on a 8m grid, broken up only by the two cores, with staircases disappointingly hidden away. The space will be populated by moveable plywood furniture and dividers with poles and wheels, in a form that can be reconfigured by students. It sounds simple but is a bespoke system from Vitra (planned for wider RCA use and soon to be rolled out in product form).

The top floor is the most dramatic with cool natural light in one half thanks to the gigantic north lights. At the edge of each floor plate, which project past the line of columns,  the ceiling lowers, creating a more intimate space – each studio-sized bay with its own door to the narrow balcony deck outside. The balcony decks are unusual in a time when students are often banned from roof terraces due to fears of suicide and dangerous high jinx. I imagine ruffled students leaning over the balustrades during nervy, gossipy or moody cigarette breaks. Mergenthaler is particularly pleased that they are under cover and protected from London’s rain.

Releasing students out to the balconies is perhaps a pragmatic solution given the site is built to its limits with little external space. It is particularly interesting when most institutional university pedagogy emphasises bringing together students and disciplines through generous staircases and shared circulation spaces, an approach the practice took at the Blavatnik School of Government. At the RCA, connection is still intended as a theme.  The vice chancellor looks to the hanger as an agora, but Mergenthaler prefers to see this connection more widely spread – a ‘distributed agora’.

The third floor, which is given over to sculpture, has a different character and has been partitioned off with rough ply to about 2.5   – all of which can be knocked around as needed. In fact the ghost of Gordon Matta-Clarke reigns in the RCA’s existing studios so here an extra 300mm of concrete has been poured to deal with the proclivity of sculpture students to take an angle grinder to the floor. This seems an unnecessarily carbon-heavy precaution given that Herzog & de Meuron confirms there are no services in the floor to protect.

While at some universities there is a palpable difference in build cost between student teaching spaces and innovation hubs, at the RCA the difference is in scale. The Rausing tower has a compact plan of 560m² on each layer. Two floors are dedicated to RCA graduates who are given a boost by the college with mentoring, space and access to a venture capitalist fund to invest in innovations.

Those innovations currently include capturing the particulates from car tyres and the development of a recyclable Gortex-style performance fabric. On other floors researchers delve into computer and materials science, the vice chancellor shows off a robotic octopus in a water tank with all the kit that surrounds it. It is exciting stuff and in large part driven by the imperative of climate change. The RCA suggests the building itself plays its part in this too, with £3 million put into reaching BREEAM Excellent, though it is unclear whether this includes passive measures such as the balconies shading windows, or the 75-80% of GGBS and the formwork that was used until it was spent. There are PVs, though only on the roof, which is easiest to service. I am assured that it meets the 2030 targets. But primarily the case for its contribution to sustainability is product endurance.

The innovations will move on out into the world and the building will be adapted for whatever comes next.