Organise a visit to RX Architects’ latest project, Seabreeze, in Camber, East Sussex (shortlisted for RIBA House of the Year 2022), and you won’t be sent a conventional address with a number and a street name. Rather, the only access to the house is from the front, via the beach. You’ll arrive at the main village car park with geographical co-ordinates and a sense of adventure instead. While other beachfront houses, particularly in this kind of popular holiday resort on the south coast, usually have access from the back, Seabreeze is one of five houses on a short stretch with no road nor address. The sea and strand lie out in front and dunes build up to the rear – the houses embanked between them.

Legend has it that the houses are here because once upon a time there was a road of houses behind but they were engulfed by the dunes when no one was looking after them during the Second World War. Historical photographs exist of homes half submerged in sand. Instead of recovering them, new houses were permitted closer to the sea, and the dunes, now a Site of Special Scientific Interest, allowed to swell as a natural flood defence behind. When I visited the annual dig out had just taken place to prevent them smothering these homes as well. 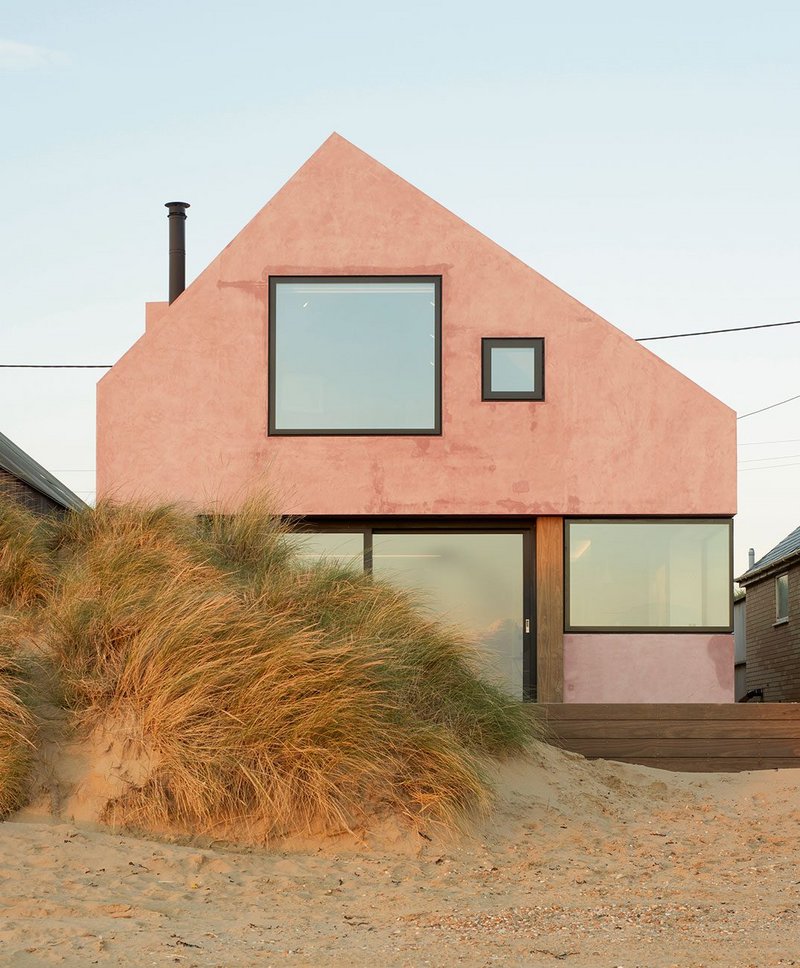 The slightly asymmetrical front of Seabreeze. Some snagging still has to be done where sand got into the micro-cement surface during application. Credit: Richard Chivers

Hence when RX Architects was commissioned by the client, a British family based in France who acquired the plot in 2018, its start off idea was not about form or floorplan, but the concept of designing a ­completely sealed building that would stop the sand getting in and do away with every external crevice where it could accumulate.

‘The challenge in this location is that the sand builds so quickly it gets into windows, sills, drains and gutters,’ explains practice co-director Rob Pollard.

The idea was to make a single enveloped building that removed eaves, rainwater pipes and different finishes from roof to wall to make it as seamless as possible – lessons in part learned the hard way by neighbouring buildings and the pair of almost identical houses completed by WAM Architects in 2016 to the west. Digging out the balcony is no way to spend the first day of a holiday.

In terms of planning, the local authority was keen to retain the same 1.5 storey height of the existing 1970s white weather-boarded A-frame house, while its close neighbours and nearby SSI meant the footprint was relatively set. Meanwhile, the symmetrical gable-ended shape was largely informed by equally loading the 300mm-deep raft foundation construction that is typical of buildings on Romney Marsh – only the gable is slightly off-centre to give more headspace to the low beach house on the right. The kitchen living space is to the front on the ground floor, opening onto a terrace deck partially screened by a grassy dune. The master ­bedroom is above at first floor; the en suite shower formed inside the mini lateral dormer that protrudes above the roofline on one side and makes the building that little bit more nuanced and distinctive.

Externally, the streamlined finish is achieved by cloaking the building in a pink shell of trowelled-on micro-cement product from Italy. It leaves the fabric completely seamless and allowed a much simpler, controlled construction: blockwork, air void, rubber membrane and carrier board. Windows are flush with the facade to minimise ledges and are mostly fixed to prevent the possibility of gaps. Two 90m boreholes provide heating and cooling because air-source heat pumps aren’t possible. Rainwater rolls off the roof and down the walls, draining directly into the sand.

The pink colour choice came about, as other RX Architects director Derek Rankin explains because the practice ‘had worried a grey concrete building would be too serious for the seaside’. It wanted to flip that kind of moodiness on its head, to make it more fun and whimsical. The pink varies a lot, evoking traditional Mediterranean plaster and getting an orange glow at night. The all-over smooth pink surface is only broken up materially by a curving Kebony timber canopy that whisks like the wind between the house and its right-hand neighbour above the entrance and lines the recessed porch. It matches the timber of the decking and helps soften the seriousness too.

Inside, the ground floor is characterised by a pleasant sensible riot of texture and materials. The floor and upstands are a terrazzo tile that again helps to disguise sand brought in from the beach. The kitchen is made from fumed eucalyptus with a concrete-like quartz worktop also used for the dramatic heath in the sitting area. A bespoke lightly smoked oak dining table, matching pocket doors and other fitted joinery are designed to mimic the engineered wood flooring used on the stair treads, balustrade and feature wall behind it – it is deliberately chunky and robust in keeping with the solidity elsewhere. In the spa to the back of the footprint the mood changes again; darker with grey porcelain floor tiles, a sunken hot tub, ­micro-cement walls and only a high-up horizontal slot window for daylight. There is also a cloakroom, utility and boot room, but the main focus is on the views from the living room onto the beach, where at high tide the sea is almost lapping at one’s toes.

Upstairs materials are pared back. The panelled engineered oak stairwell feature wall continues in the bedrooms and on the floor, as does the bespoke smoked joinery. Volumes extend to the rafters and in the rear bedroom there are deep recessed bunks for additional guests, while the master bedroom has a free-standing bath with its own small operable window and a fixed skylight to gaze up at the stars. The bed is surprisingly orientated at 45º to the view – and why not?

Remarkably, construction that had been carefully scheduled to follow the bird migrating season ended up starting two days before the national coronavirus lockdown in March 2020. There was a brief hiatus but ultimately building work was eased because beach was closed to the public, making access considerably less busy than usual. For the clients though, stuck in France, the whole project was constructed remotely, with sample sign-offs on Zoom. They saw it for the first time only after it completed (‘a nervous moment’).

It was fortuitous then that RX Architects is local. Indeed, the practice is now working on other beach houses with a similar situation and already has six projects in each of the four bays around Rye where its office is based – one for a client in Costa Rica. This work has, of course, been bolstered by the pandemic and people wanting holiday homes on the coast or to move out of cities, but it is becoming almost coyly characteristic of a changing seaside – although Seabreeze possibly sets an more interesting new direction. Soon it might be questioned in jest which came first; the practice or the marine co-ordinates of the bay it is named after.