At Mae Architects’ Sands End Arts and Community Centre, on the site of what was once part of Europe’s largest plant nursery, it's people that now grow and flourish

It’s a mark of the influence and affluence of 19th century horticulturalist James Veitch, that his nursery empire stretched from the King’s Road all the way to philanthropist Charlotte Sulivan’s Broom House estate in the Fulham Vestry, just east of the newly-founded Hurlingham Club. Established in 1840, the nursery employed plant collectors including noted botanist brothers William and Thomas Lobb, and dispatched them all over the world to bring back plant samples to sell to London’s horticultural elite. At its peak, Veitch & Sons ran the largest family-run plant nursery in Europe, introducing 1281 varieties into the domestic market, from the Monkey Puzzle tree to exotic orchids. The RHS Veitch Memorial Medal, inaugurated then and still presented annually, pins the dynasty in time – but by 1910 the business had folded and the lean-to greenhouses that lay at the north end of the 21 acres of land donated by Sulivan in 1903 to the Borough of Fulham for the benefit of the local community, quietly rotted away unseen next to the gatekeeper’s lodge behind South Park’s imposing brick and terracotta wall, before finally being swept away in a 1980s-style clear out.

Sands End Arts and Community Centre, designed by Mae Architects, seems, like the medal, to be an invocation of the Veitch legacy; referencing as it does the simplicity of those old lean-to glasshouses – but here writ large to look over the wall that had always hid them. The centre is also a homage that’s clearly channelled through Stirling and Gowan’s 1962 Brunswick Park Primary School in Camberwell, explains project architect Michael Dillon. Its dramatic, compass-set, strut-propped monopitches are echoed here, if to a lesser degree, but the principle’s the same. Brunswick Park’s barrow-like mound has here been supplanted by South Park’s defensive brick wall; their end glazing allowing both to act like a periscope, drawing in high-level light from an open sky above rather than a congested urban realm without. But here they serve an auxiliary intent, surmounting the boundary wall to create a statement entry to the park. This achieved, it slopes back away from the roads to deferentially reveal the locally-listed mock Tudor gatekeeper’s lodge; which, now being converted into an art gallery for the park, acts as the historical focus of the new centre.

Its formal homogeneity is testament to the conviction of the architect to develop the design despite the lack of a clear brief from the London Borough of Hammersmith & Fulham. With the former Broughton Rd community centre displaced to make way for luxury homes, Dillon explains that the borough was keen to create a new centre that made use of a redundant site at the park’s north west corner, addressing users from Parsons Green and placing it next to the borough’s biggest housing estate, Sulivan Court. Funding for the £2.75 million centre was secured from Chelsea FC and Thames Tideway super-sewer development levies, but the reality was while the council wanted something for the whole community, it wasn’t quite sure what. As things stand, the borough is in the process of setting up a charitable trust that will run its new hall, meeting room and arts space, but Dillon spells out what this is: ‘What we’ve done here is a shell building. Our brief was about developing a series of flexible spaces [that could] change function and be let separately; we also wanted something as overtly public as possible.’

Given the size of the main hall, proposed café space, meeting room, pre-school nursery and ancillary spaces, its curious how, despite its large clerestory glazing which reaches up to 4.5m in height, the building creeps up on you as you approach the corner of Clancarty and Peterborough Roads. And instead of a reinforced corner, the structure shies away at its end, creating a brick-paver courtyard within the boundary wall, seen beyond a steel gate that opens to the street while the centre is open. It also reveals the monopitch section of the four blocks, intersecting as pairs on an L-shaped plan. At this corner, the entrance doubles as the conjunction of the outer ‘street’ and inner ‘park’ courtyards – a critical aspect of the firm’s planning strategy.

It might have been down to the budget, but the simple, robust material choices made throughout are manifested from the minute you enter through the park gates. The huge spruce CLT fins that modulate the yawning north and west glazed elevations reveal the structure within, while giving lovely internal views out to the canopies of the mature trees on the site’s perimeter. They will also lift the eye above the traffic line of the busy Peterborough Road: ‘We wanted the building to connect with the park setting and high level windows also meant that we weren’t overlooking local residents, so it worked on several levels,’ explains Dillon.

What works too is his choice of warm, ‘Nougat’ facing brick from Dutch firm StoneCycling, using 70% recycled material and 30% clay, complementing the Edwardian wall’s buttery terracotta dressings. By way of working into the material, main elevations were specified, at added cost, as sawn-faced rather than the natural finish of flank elevations, creating a subtle hierarchy all of its own. Cheaper than reconstituted stone, it was clearly more expensive than brick; evidenced in the way that Mae cut costs and saved £27,000 on the contract sum by cleverly laying the bricks on their side, to generate a façade module that is familiar yet uncanny the same time.

The brick theme occurs in plan too, where dark pavers give the ‘outer’ courtyard a Low Countries feel that expands borderlessly all the way through the reception area, café and meeting room and out beyond the glazing line across the ‘inner’ courtyard. Defined on two sides by the new blocks and on one by the gatekeeper’s lodge, this leaves one side open to the walnut grove and park beyond.  On the day I visited, autumnal leaves blew through and gathered against the inner court glazing as if to race from roadside to park; and that, says Dillon, was the aim – to dissolve the distinction between outside and in. But someone’s nerve broke, with interior bricks coated in sealant by the contractor to protect them from wear and tear , and which are now enthusiastically efflorescing beneath it. 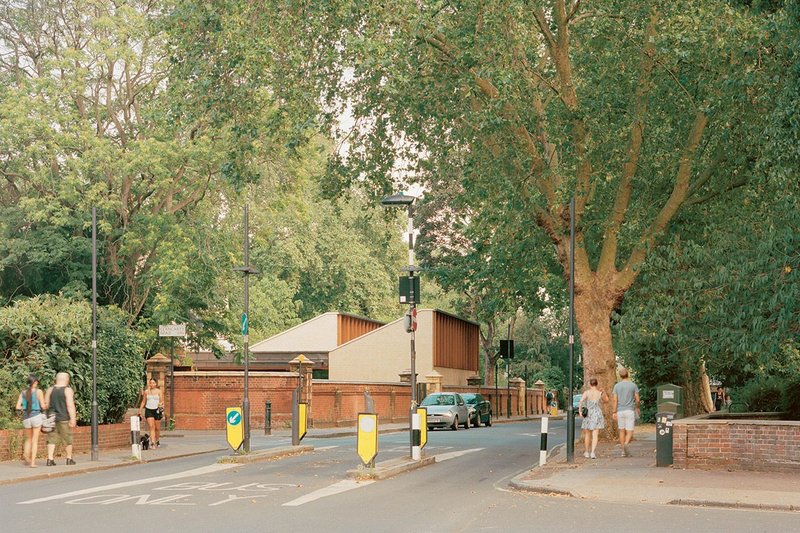 Internal spaces are refreshingly simple and reconfigurable to allow spaces to be closed off or opened out. CLT timber walls are painted a deep, transparent green and respond well to sun moving across them; with tree-dappled west sunlight in the nursery – even in the centre’s mundane toilet corridor – surprising and delightful. Daylight streams in from the park courtyard side, the projecting CLT trusses forming a simple cloister offering shelter when glazed doors are open. With budget in mind, visual proximity, as shown here, influenced material choices – such as the use of pre-patinated copper on the cloister roof contrasting with the more distant specification of the monopitches, clad in corrugated roof sheeting. But crisply junctioned at the ridge line and flank wall parapets, fixing bolt positions aligned, it’s the details that make this decision a well-mannered and reasoned one.

With the charitable entity yet to be set up, Sands End is still waiting for the people who will bring its hall, meeting room, nursery café and arts space alive; so it is hard to make a call on how the space will be occupied, but I’m sure South Park founder Charlotte Sulivan would find the new centre most agreeable, and so will today’s users. And while it makes complete sense in plan to have created a single, controlled interior space as an entrance to the park, I’m left wondering if two blocks separating outer and inner courtyards, linked by a covered, exterior passage might have better served to create a true, open and welcoming entrance to a park so defined by its enclosing wall. To breach its mass in plan as well as elevation, let the leaves blow freely through and cleansing rain rinse away those pavers’ chalky bloom. 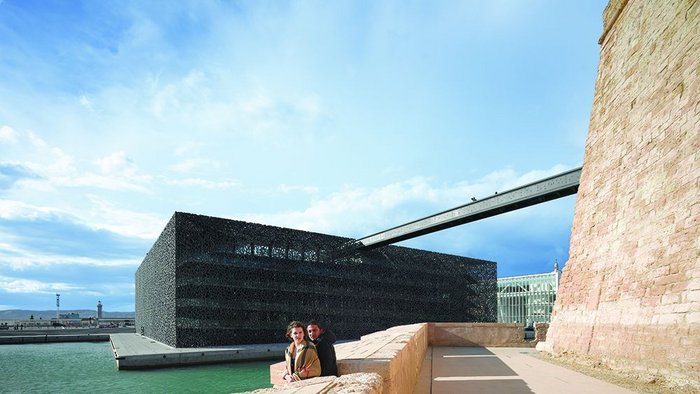