Big ambitions for Southampton’s Watermark WestQuay development were nearly squeezed to death by value engineering. Can it yet reconnect the city with its waterside, and reel in the punters? 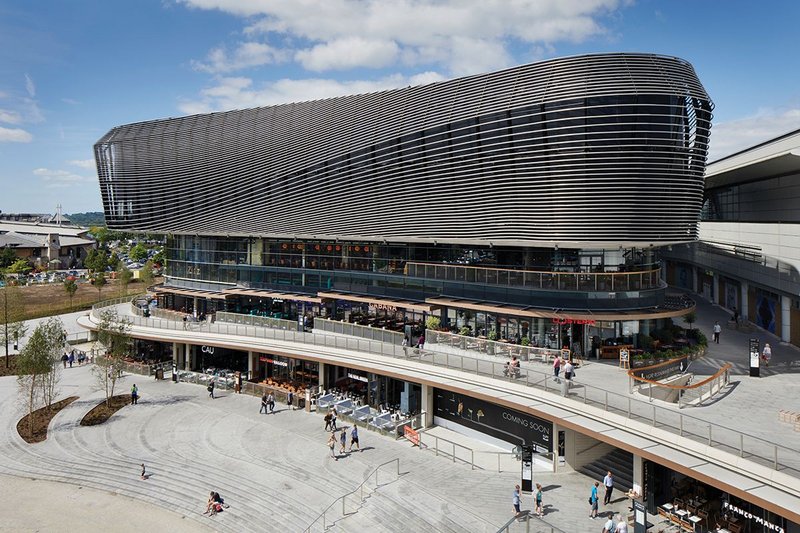 Acme’s Watermark WestQuay Southampton – a joint venture between Hammerson and the council – has been value engineered to within an inch of its life. As one of the few projects in the city’s redevelopment plan to survive the cull after the financial crash in 2008, it’s lucky to have arrived at all. But, having taken seven years to complete, it’s been an arduous process for architecture practice Acme. The design has had to compromise significantly from what was originally proposed, again and again.

The building’s envelope and appearance, less so its form, has taken the biggest kicking. What was supposed to be a leisure complex of three stacked horizontal parts with ‘a pleated metal facade at the upper level and a pleated concrete facade at ground level’ has become a concrete stepped facade at ground level with a coil of quite widely spaced pipes wrapping around the top, revealing the meant-to-be-unseen rainscreen behind. The design has inevitably been diluted of conviction as well as Acme’s usual exuberance, leaving the city aesthetically poorer. The upper cladding alone was value engineered three times pre-tender and twice post-tender. At one stage even the building’s characterising cantilever was threatened with columns.

Yet the council had started out with grandiose visions. Watermark WestQuay was supposed to resolve 60 years of planning mistakes, draw in visitors from the affluent catchment area who might otherwise go to Winchester, and encourage cruise ship passengers to stick around.

‘What the Germans didn’t destroy of Southampton in the Second World War,’ says London-based Acme founder Friedrich Ludewig, ‘the British did in the 1960s.

‘Before that Southampton would have had a Regency spa town high street, as well as the best-preserved fortified medieval city walls on the south coast. But after the war,’ Ludewig suggests, ‘things were put back as quickly, rather than as carefully as possible.’

This added to the city’s problems. The old town had already lost its relationship with the sea. Famous resident Jane Austen wrote of looking out from Forest View to the New Forest on one side and the sea at the bottom of the city wall on the other in the early 19th century, but over the late 19th and early 20th centuries Southampton’s waterfront was filled in to create a straight coast, 400m deep, 7m below the height of the city, to accommodate the arrival of big ships.

Watermark WestQuay, a 10-screen cinema, bowling alley and 24 restaurant scheme, lies at the corner of the medieval walls, by Arundel Tower, where these levels meet. The primary goal was to connect the levels in an effortless way, encouraging pedestrian flow to the lower level, where there hasn’t been much for decades. For the long term, as the first of two phases, and possibly later redevelopments, the council wanted the project to re-establish the city’s links with the water, currently nearly invisible from the centre.

Acme’s project actively achieves this, creating a long ‘upper’ promenade that slopes 140m down to the cinema entrance on the other side of the site. Alongside a lower level promenade, the promenades wrap around the building and an outdoor public ‘auditorium’ to be used for events. Essentially, the building is a 7m tall hard landscaping project with a huge cinema box on top.

‘We tried to find ways to break the scale of the building down,’ says Ludewig, explaining why Watermark WestQuay is split into three parts: the ground level concrete and glass plinth, the glazed curtain wall middle for the 24 restaurants and bowling alley, and the cantilevered 7,500m2 cinema box on top. These volumes are broken down again at each level using steps and marine grade stainless steel pipes. ‘It’s like a giant iceberg in the middle of the city but, given the Titanic, you can’t mention those in Southampton.’

The ground floor envelope is primarily reconstituted stone panel cladding that encloses the bowling alley and disguises the building services behind. Although it differs from the intended pleated concrete facade, it still has a weighty feel created by a layering of steps that appear to fold into the walls. Its construction is remarkably ‘simple’ given its complex visual appearance. Sub-contracted by Sterling Services, it cleverly uses a palette of only five set panels and mouldings across the ground level to break down the scale and create variation, so parts don’t feel like sheer 7m walls. The reconstituted stone is a careful mix of sand and aggregate, acid etched to reveal the small stones and make it glisten.

Whereas the middle section of the building is a standardised glass curtain wall, much of the architect’s time was spent developing the outer skin of the top section. Acme wanted something metallic and sculptural that would break down the massing and provide transparency.

During 2014 the practice experimented with shingles, standing seam, expanded mesh and ZEPPS but eventually settled on pipes in January 2015, inspired partly by Foster + Partners’ More London – and by the fact that the site was once used by Pirelli for manufacturing 76mm thick metal cables for early telephone communication across the Atlantic. Acme found Austrian manufacturer Seele, which had developed a method to bend pipes in two dimensions for a project by Snøhetta in Saudi Arabia and was keen to use it again. Within this design, the pipes contain LED lighting that can be changed in colour to animate the building at night.

The practice’s task was to work with the distance between the pipes to make the shape read the same, with gaps as narrow as 50mm at the top and 400mm at the bottom, pushing the facade back at the top and bottom to create an angle. At 26,700m the team switched into Grasshopper to help with the modelling, scripting it to flow pipes according to defined criteria around the building, over the roof and under the soffit, with some fiddling afterwards. When the pipes were cut to 15,000m, rather than widening the gradient of gaps, the practice scrapped the pipes altogether in the alleyway between the building and the BDP-designed shopping centre next door.

The pipes are tied back to the primary white steelwork structure using a secondary steelwork structure set out at nominal 3m centres and fixed to thermally broken projecting steel stubs connected to the primary structure. The cladding pipes provide the horizontal bracing, and isolating tape and plastic washers have been used to prevent bi-metallic corrosion between dissimilar metals. An additional secondary structure had to be developed for the final iteration to support the pipes that had been cut in the alleyway. At the bottom of the void between the pipes and main body of the building, the architect has incorporated a 600mm wide platform that can be used for cleaning and maintenance. Black netting, only visible from inside the cinema foyer, stretches across this void to prevent birds nesting.

The substructure behind the pipes is necessarily as dark as possible to make it seem invisible. The inner skin (installed by sub-contractor Lakesmere) is clad in Kingspan insulated composite metal rainscreen panels with a U-value of 0.26, more commonly found on industrial buildings, chosen in the darkest available shade. At the top, the parapet rises above the building line to avoid an additional screen to hide the enormous plant, which has roof access for all 24 restaurants. The soffit was resolved in a similar way, with a 0.20 U-value composite inner skin and metal tubes supported off a framework below, and installed by airport ceiling specialist SAS.

Watermark WestQuay might be unjustifiably tall next to the medieval wall, given the excess space surrounding it on the lower level of the city, but Acme has battled within a challenging context to create a building that fulfils its aim of drawing people down towards the water with a design that is suitably sculptural in form.

To see a video of WestQuay Watermark's construction click here.