One thing leads to another at St Angela’s College in Cork, which O’Donnell and Tuomey has intricately reinvented as an urban hilltop village with fabulous views 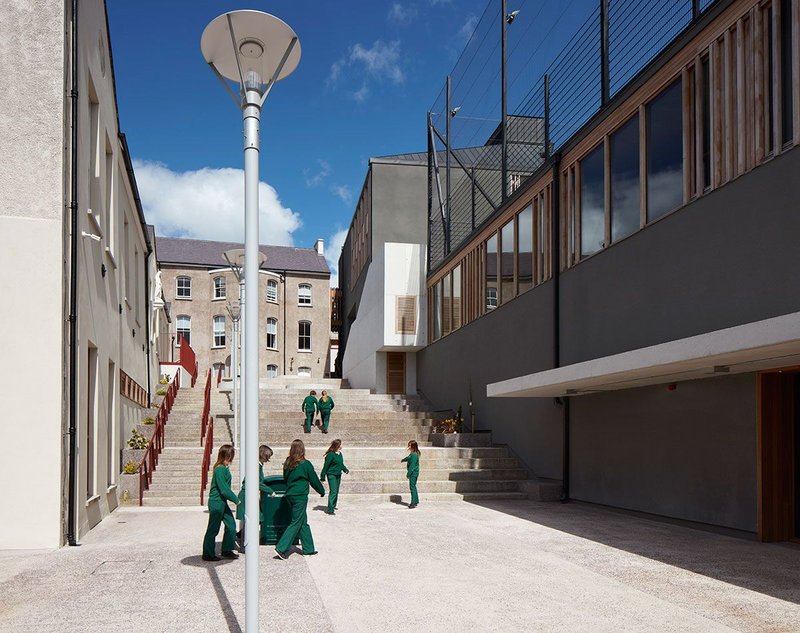 The main amphitheatre space and forum looking north. The new science and gym blocks not only connect the formerly discrete east and north buildings but create a civic grouping. Credit: Dennis Gilbert/VIEW

With its Ursuline mission to heal and educate, it might be inappropriate to call St Angela’s College in Cork a citadel – it’s a less defensive and more civic thing. Angela Merici, founder of the 15th century order of nuns that ran it, might have hailed from Brescia at the foot of the Italian Alps but this reconfigured 19th century school in Eire feels as though it is warmed by Umbrian sun. Like Assisi, at times it appears like a fortified basilica, part of a bigger urban entity clinging to a rockface: one of those Mediterranean towns only truly discovered by walking its small lanes and steps with snatched views to the landscape beyond, of hidden timber courts and main squares of stone; of bridges, walled orchards and subterranean passages. Perched on Cork’s St Patrick’s Hill, looking south past the River Lee to the clustered towers of St Fin Barre’s Cathedral and west to the Shandon belltower – that’s St Angela’s in a nutshell. But it could so easily not have been like this.

Charged by Cork’s catholic bishop in 1887, the nuns set up a girl’s school in the city below its hillside convent and were given four 19th century industrial buildings formerly owned by the neighbouring Murphy’s brewery with which to do it. Even with the 14 prefab units that have sprouted since then, the school ran out of space, and with the buildings in urgent need of repair, a feasibility study was commissioned from O’Donnell and Tuomey in 1999 to look at the what could be done. Working closely with the school and constrained by a dense, difficult-to-access urban site that dropped 18m along its length, the firm proposed two new science and art blocks to replace one of the existing buildings and link the rest; not only that, but to sink a brand new gym block into the south end of the grounds. The logistical effort and money needed to achieve the proposal put paid to any serious consideration of it– until 2011 that is, when the school moved into state hands and the project was injected with funds to develop the proposition and triple the school’s area from 2000m² to 6000m². Crucially, despite the savings that could have been made, the urge to sell the site and build beyond the centre was resisted, as much by the local government as the school; St Angela’s was part of the history of the city – and all were keen it should remain so.

It was a visionary strategy that demanded concessions from Cork’s city planners, the school (it involved a two year decant into a former hospital) but most importantly local residents, behind whose terraces the school was tucked away. In not objecting to the development, they signed themselves up to two years of demolition and construction works, with skip trucks going past their doors carting away the hundreds of cubic tonnes of earth necessary to build the gym block. Principal Pat Curran recalls a time when ‘the hill smelled of little else but burning clutches’. Like the architect, which won this year’s RIAI Award for Best Education Building and is up for an RIBA International Award, they too should get a medal.

To describe the project as merely the insertion of three new blocks onto the site does it a serious disservice. It’s what those blocks do to create connectivity between them and the existing school and convent, while melding almost invisibly into the existing grain of the city, that makes this project so remarkable. And it’s remarkably accessible too; the new design, with just two lifts, generates five levels of teaching spaces across the 18m drop; each one has level access to external space. The skill of the architectural execution is as understated as the buildings’ half-hidden siting; the plan alone cannot explain it – its spatial complexity can only really be understood in section and even then you must walk through it to comprehend it.

To summarise, the top section links the arts block via a bridge to the converted convent, now the school library and staff area. Further down the arts block connects to one of the originals and, via that, the new science building. The science and entrance block, in turn, links via an underground space to another existing building with its new refectory, and to the gym, whose size surprises. But the internal connections are only half the story, it’s the complex interrelationship of internal and external spaces that make this school such a joy. From the science block the girls even get views across to the nearby Christian Brothers School. Senior architect Henrik Wolterstorff jokes that they are anticipating a rise in the physics cohort this year, but truth is, visual conceits like these abound.

Wandering through the empty college during the summer break, it’s easy to accord with Pat Curran’s account of how the girls occupy it; the young ones gravitate to the old gazebo in the upper orchard, visually guarded by the library and staff area. Transition year girls potter about in both mid-level courts, immersing themselves in the social intrigues of groupings and associations as they move hourly from one class to the other, while sixth formers, confident and preparing to launch themselves into the world (topping up their tans as they do so) have adopted the lofty eyrie of the astroturf external sports court, with its fantastic views over the city. The skill of the planning is such that the new can connect to the old and girls can now move to any part of the college internally via wide corridors or externally; and either way that journey will be punctuated with moments of visual drama or incidence. It makes the mere act of moving through the college a flowing, almost thrilling, pleasure.

And past memories of the school seem to be picked up on so that the spirit of the old place suffuses the new. Wolterstorff tells me that, having walked down the very narrow entrance lane off St Patrick’s Hill, the critical view from the entrance to the clock tower of Shandon’s Bells was kept in the double height reception to remind girls past and present of future tardiness. The apple orchard, out of bounds in the past, is a reflective place of calm now, counterpointing the art block’s wide west views; even new, open plan spaces in the convent retain its creaky floorboards and have downstands where walls used to be, an echo of its former cell-like nature. The school bell by the old main entrance door on the existing north block remains, but now rings out to a small piazza at mid-level before its echo tumbles past circular glass lights of the underground link and down the grand stairs south to the far end of St Angela’s largest external space and the refectory and gym terrace. Curran envisages this as a stage for lunchtime concerts in his new amphitheatre; looking back up the hill from here you can see why.

The echoes form part of the character of the new building too. The aggregate for the concrete structure’s bare classroom walls and soffits is Cork’s creamy limestone, while its local red sandstone appears on horizontal surfaces outside, referencing the materiality of the city. Elsewhere, iroko cladding for the opening windows, with their multiple mullions, act more like a screen than a frame. The low, pyramidal zinc roofs in anthracite grey blend in, picked up in the vertical by dark grey spray render over external wall insulation. Occasionally as you walk through you’ll spot one of the firm’s signature circular windows or a wall of welsh slate, beloved of the local conservation officer, in the main building facing east; perhaps a nod to the ships in Cork’s natural harbour or the direction of the driving rain. From the site boundary of Richmond Hill, sitting atop its huge west block wall of red sandstone rubble, the school looks like a impregnable rampart, timber-faced quarters above safely set back, staring askance down to the road.

It’s hard to find fault with this school. I find a wry irony (though Sister Merici may not) in the fact that the least satisfactory spaces are the crypt-like ‘religious room’, lit by a single courtyard skylight, and the refectory carved out from below the existing west block. The latter is long, deep and buried by the stair of the main square; both could do with divine rays to dispel their darkness, but then you bear in mind this school was procured for €1,550/m² and to err is human. But this venal sin forgiven, the skill evident in reconciling the site’s challenges of design and logistics have created an architecture of civic grace and natural ease; as if the accretions of time, weather and human occupation had brought it all about. Principal Pat Curran tells me the girls used to affectionately call their dilapidated and expiring old college Hogwarts. But with intelligence and care, and with next to nothing, O’Donnell and Tuomey has alchemised St Angela’s and handed it back, revived, gilded and enchanted.