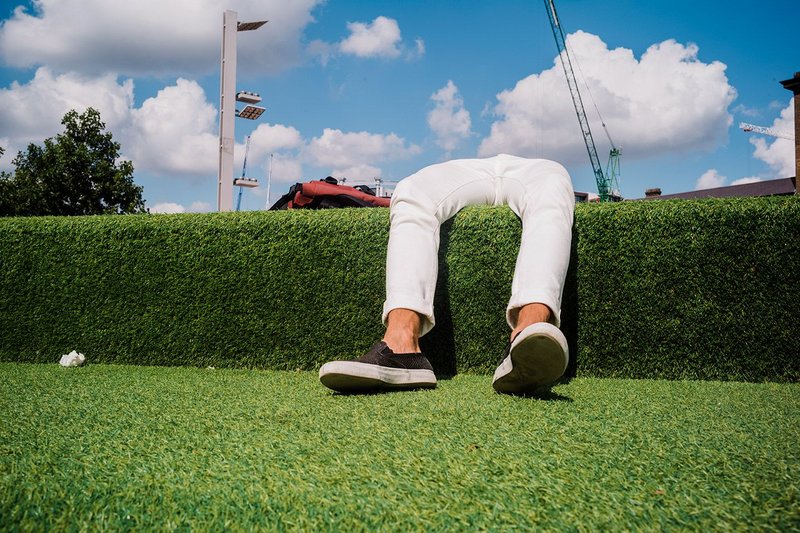 Flat out on the stepped descent frm Granary Square to the Regent’s Canal. Credit: Sarah Lee

‘Woss dis?’ says a piping voice from somewhere down at my knee level. It’s a tiny nappy-wearing toddler holding up a pair of loafers, one in each hand. I recognise these shoes. They belong to photographer Sarah Lee. She’s removed them and paddled into the fountains with her Leica, the better to capture the deliriously happy children dashing to and fro in the programmed jets of water. We’re sitting among the parents in Granary Square, the heart of the King’s Cross development. It’s a fine late summer day in early September. We’ve come to see if this new London district – conceived in a different form some 30 years ago but designed and built by a development consortium led by Argent from 2006 onwards, after five years of consultation – is working as a real place yet.  The children at least are in no doubt about it.

Joe Morris and I rescue Lee’s loafers from the fascinated child and the three of us continue our tour of the new 27-ha postal district of N1C, as the King’s Cross regeneration area is classified. It is about 60 per cent built now, with an end date of 2021. Part of the purpose of this dérive is to call in on the new Duggan Morris building half way up the site, just behind Central St Martins’ art school. In two shades of pink, with delicately textured aluminium cladding panels and balustrades, it’s a spec office block with a difference, containing a 7m high, 12m wide lobby with an Everyman cinema, spin-gym and restaurant and some rather fine landscaped roof terraces. Clearly a cut above the spec-office norm, it’s regarded by Argent as an attractor-building to the ‘cultural quarter’ of the site around Central St Martins. A building for the Aga Khan University by Fumihiko Maki is going up alongside. 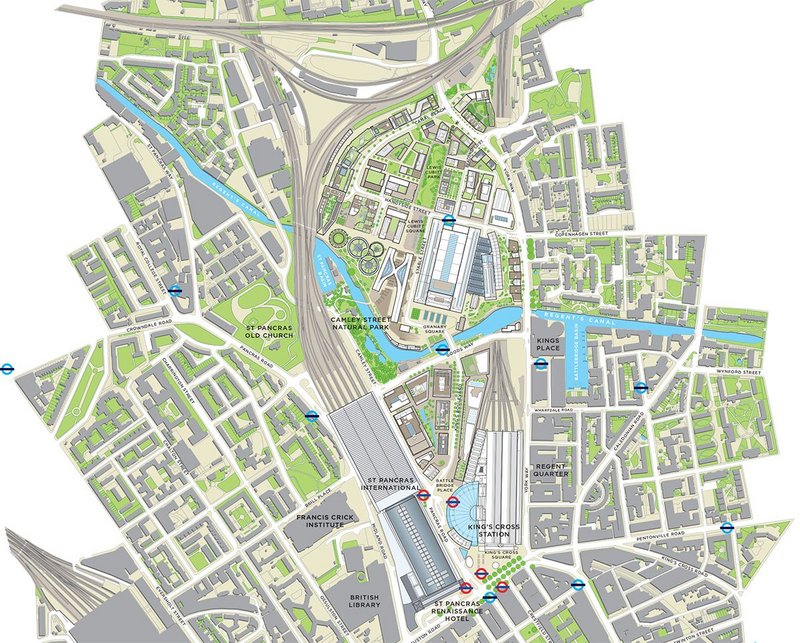 But the idea of bringing Lee and Morris together is to assess the placeness of this place as a whole rather than as a bundle of individual buildings. A lot of Lee’s work is for the Guardian, based in a 2008 Dixon Jones building overlooking the site, which also contains the King’s Place concert hall/art gallery complex. So she’s familiar with the locale and she reckons that Granary Square is working democratically as it should: on a warm day like today, local families come here with their picnics, children in swimwear. The parents sit on the enormous Ian McChesney granite benches which, despite their subtle curvature, are also broad enough to use as tables, while the children frolic in the fountains. It’s a beach scene, really, but there’s another waterfront nearby where the Regent’s canal winds past. Here, on the Astroturf-covered broad steps leading down from Granary Square and in the gardens to the east, you find the office workers on their lunch hours.

South of that, in the wedge of land bet­ween King’s Cross and St Pancras stations, you get the urban set piece of Pancras Square, recently completed with a very muscular Corten office building by Eric Parry, joining understated neighbours by Demetri Porphyrios, Allies & Morrison (these two responsible for the overall masterplan of the site) Bennetts Associates and, at the southern end, a black-columned Rossi-influenced showpiece by David Chipperfield. The long triangular space they enclose, descending in broad terraces from north to south, is lined with restaurants and cafés and seems to be efficiently absorbing a lot of the population spilling out from the two big railway stations. It’s a pan-European kind of space.

Morris is an informed guide. We meet at ‘Gasholder Park’ the green space surrounded by a hall-of-stainless-steel-mirrors arcade in one of the reassembled listed gasholders. Bell Philips did that, Wilkinson Eyre has made cylindrical bocks of apartments in the others. Thumbs-up from Lee: ‘Everyone loves the gasholders’.  From there we move via the decorative moulded concrete of a Niall McLaughlin apartment block (something of a Louis Sullivan echo there, Morris notes) alongside the railway lines out of St Pancras up to the development edges, where finished townscape gives way to hoardings and temporary artworks.  That brings us to the back of ‘Coal Drops Yard’ where the roofs of two ranges of listed buildings are being turned into tagliatelle by Thomas Heatherwick. He’s a bit of an Aunt Sally after the Garden Bridge debacle, but Morris is clear that this is clever stuff from Heatherwick – by pulling the roofs together in this startling way he makes a great deal more commercial floorspace and creates a covered area at the centre of this upmarket speciality shopping centre.

There is plenty still to build, such as the forthcoming Google HQ by Bjarke Ingels Group/Heatherwick/BDP) along with much more housing of various kinds towards the northern half of the site. Throughout this redevelopment, many very good architects, designers and artists are involved, as is the Argent way. Not that the end result is in any way inevitable – in different political and financial times, for instance, it could pretty much all have become social housing such as you get a lot of all around the site. The aim is a mixed-use city quarter – getting Central St Martins into the Granary buildings early on was a key move there – but of course the ‘public’ aspect of all this is, as with so many large developments, somewhat illusory: private security guards patrol the site and you need permission to take professional photography there. However, it is no gated community, its roads link to the city around. I’ll be interested to see how the non-railway edges of the site eventually turn out – to what extent it will diffuse into its urban surroundings rather than presenting an abrupt scale change. How much SLOAP (Space Left Over After Planning) there will be. Given land values in London, probably not much.

We mooch along the canal, past the shops, through the enormous preserved covered arcade to the east of Central St. Martins, hither and thither. At the end of it all, I can say this: I’ve been following the evolution of this place since its inception and it is working out pretty well. It’s a purposeful place with a variety of open spaces and very good landscaping throughout. Easily comparable in urban terms, say, to the reconstruction of the Potsdamer Platz area of Berlin, but with sizeable and interesting industrial remnants in the mix. There are glitch moments, and – despite a respectable proportion of the housing being affordable social-rented -  the southern end has a distinctly affluent sheen to it. But overall, yes, I can report that, to paraphrase Gertrude Stein, there is a ‘there’ there.