Clancy Moore has finished work on its repurposed barn at Shatwell Farm, leaving plenty of scope for ad-hoc additions by those who use it

Most visitors to Clancy Moore’s new building in a barn at Shatwell Farm ask if it is finished. The answer is yes, and no. The architect’s work is done, leaving a rough-hewn ensemble of spaces, structure and services to be adapted by participants in various educational and cultural activities that take place in the Somerset farmyard. ‘The intention was to make something finished enough to be enabling,’ says practice partner Andrew Clancy, ‘but not so finished as to shut down potential’.

The farm defies easy classification, but is used by writer and collector Niall Hobhouse as a sort of test-bed for speculation on architecture and rural development. Alongside a dairy herd in a colonnaded cowshed by Stephen Taylor there are new and old buildings housing carpenters, stoneworkers and a gallery, and monuments by Peter Smithson and Alvaro Siza. Also present is Drawing Matter, a drawings collection with attached events including a summer school for teenagers. Other goings-on among the silos and silage pits include dinners, public talks and opera.

Clancy Moore’s project is conceived as a piece of infrastructure which should be capable of supporting all these, from the largest to the smallest, alongside a store for Drawing Matter.

Seeking to make a building that has a strong character but remains open to interpretation, the practice referred to Florian Beigel’s Half Moon Theatre in London and Lina Bo Bardi’s Teatro Oficina in São Paulo – robust spaces for performance that resemble urban streets, set within existing buildings. Other aims were to celebrate the elegant portal frame of the barn itself – a 1970s Atcost prefab – and to do only as much as necessary, with as little construction as possible. 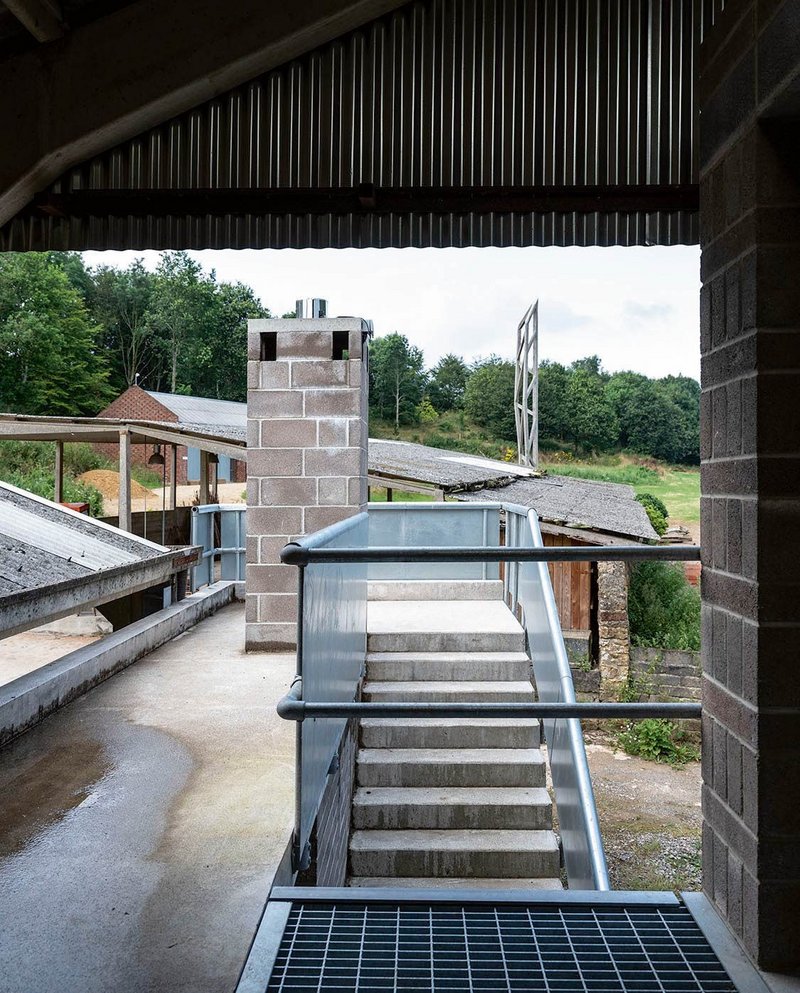 First-floor walkway with view of obelisk by Peter Smithson beyond. Credit: Sue Barr

Internal partitions were cleared to expose the line of precast columns down the middle. On one side, the building is left vacant to accommodate large audiences. On the other, the ground-floor store and a multi-use space above are set behind a two-storey spine of toilets, kitchens and stairs, constructed from concrete blocks. Punctuated by deep openings and subtly refined by varied colours and bonds in the blockwork, it presents a semi-formal facade to the empty side. Fixed to it is a galvanized steel structure that forms an arcade leading from the entrance to the back of the building, where there is a rudimentary outdoor kitchen with an open fireplace. With a balcony above served by stairs at both ends, it’s full of theatrical possibilities.

The large space upstairs might serve as a dressing room, classroom or gallery. Its open sides are hung with translucent plastic drapes usually found in mechanics’ workshops, which billow in the breeze. One can imagine summer school students having a great time camping up there, with a wide-angle view of the valley below. When I visited, traces of their involvement with the building were all around: straw bales were stacked to make an amphitheatre on the upper floor, and a screen of woven hazel hung from the steelwork, casting long shadows down the arcade.

As an environment for temporary events, whose inhabitants can create the spaces they want, the project picks up on the enduring influence of the late Cedric Price at Shatwell. His sketches of the farmyard – as adaptable sheds and stores – were the last he made, and still inform Hobhouse’s view of it as a perpetual work in progress. ‘The first rule is that there is no intention that it should ever be finished, and no masterplan,’ he says.

It is finished enough to be enabling, but not so finished as to shut down potential

Materially, too, the building is of its place. Industrial products that constitute the modern agricultural vernacular are supplemented by items salvaged from the yard. Precision and canny improvisation in their use make characterful spaces. Railway sleepers and glass panes found in the barn make walls below a new corrugated metal skin; and chunky columns within the archive are formed from stacked sections of drainage pipe. ‘There was a genuine engagement with ideas of bricolage and the ad-hoc, in the proper sense of being specific to this condition’, says architect Colm Moore. ‘Things that architects often talk about, but I’m not sure they actually do’.

There’s a lot packed into this lean and economical structure, but much went unrealised because it crossed the line of ‘just enough’. What happens next is for others to decide.