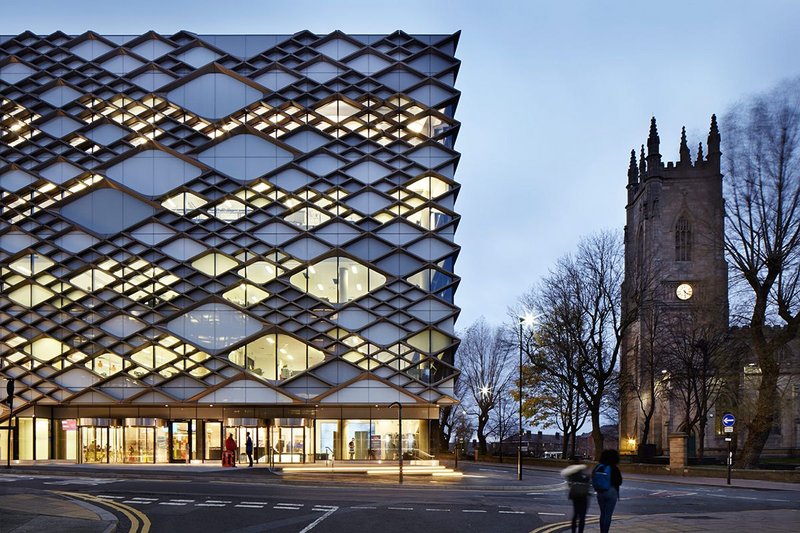 University of Sheffield’s Faculty of Engineering is covered by an intricate pattern of thousands of anodised aluminium diamonds. Credit: Jack Hobhouse

A trip to Twelve Architects’ headquarters in Hatton Garden takes you into London’s historic jewellery quarter and the centre of the UK diamond trade. Shop windows are filled with pricey stones and signs with flashy ­diamond graphics compete to pull in wealthy punters and brides-to-be.

Strange then, that this apparently had no influence on the studio’s design for the ­Diamond Building, a 19,500m2 development for the University of Sheffield’s Faculty of ­Engineering, where the facade is covered by an intricate pattern of more than 2,000 anodised aluminium diamonds.

‘I know it seems strange. I genuinely hadn’t considered the Hatton Garden connection. Maybe it was subliminal,’ quips studio director Matt Cartwright.
What did have an obvious impact on the design was the client’s requirement for a ­landmark building that would symbolise an ambition to become the UK’s leading engineering university. The diamond lattice creates a highly sculptural facade, its chunky, sweeping diagonals juxtaposed against the more delicate lines of the unitised curtain wall behind. The pattern is repeated on the rear face of the glass, clearly visible to students and staff inside.

‘The university wanted the building to be distinctive inside and out, which is something many buildings struggle with,’ says Cartwright. ‘For us, the diamond lattice is really successful in delivering both as it is instantly recognisable from any interior space.’

The 2,780 rhomboid forms are inspired by detailing on the surrounding historic buildings

Valued £81 million, the Diamond Building is the university’s largest ever capital investment in teaching and learning. It will play a major role in its wider research programme and partnership with industry and is designed to double the faculty’s capacity by 2021.

The scheme is deep plan, 85m by 70m at its widest point, and comprises two four-storey blocks, on the north and south sides, separated by a full height central atrium.

There are 2,780 rhomboid forms in total, inspired by detailing on the surrounding ­historic buildings, notably the stonework tracery supporting stained glass windows in the adjacent Gothic church. They also reference a ‘cellular automaton’, a discrete model studied in engineering and used by the university to describe how the microstructure of steel changes during processing. 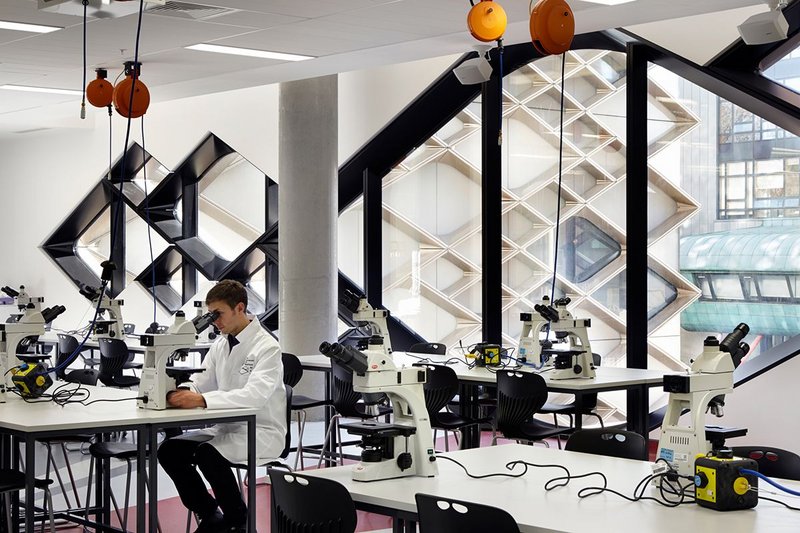 The pattern is recognisable from any interior space – here in one of the laboratories. Credit: Jack Hobhouse

Essentially, the lattice is a form of capping, fixed back to raking transoms on the unitised curtain wall. Cartwright says the semi random pattern is also intended to ‘create an identity and give human scale to a building that is essentially a rectangular box extruded straight up, a form dictated by the many functions we had to accommodate and fairly common for highly serviced laboratory buildings.’

Early in the design, the practice explored the idea of creating the primary structure using concrete diamonds, but the scale of the elements would have over-constrained internal spaces, adds Cartwright, and sacrificed the delicate engineered aesthetic Twelve wanted.

There were also programme benefits to the chosen approach: installing the lattice after the unitised curtain wall was complete enabled the main contractor, Balfour ­Beatty, to take the facade off the critical path and quickly progress internal packages.

Diamonds on the facade are of numerous sizes, based on multiples of the 1.8m planning module. The smallest is 1.8m wide by 0.9m tall, the largest is 18m across. Only the atrium elevations feature the largest diamonds.

Facade drawings identified  interior functions and window positions, which helped bring logic to the diamond pattern. Each elevation has a different combination of transparent, translucent and opaque glazing behind the lattice to address levels of solar intensity.

Cartwright comments: ‘We wanted to create variation between clear and solid glazing to give the building subtle changes of light at night and help soften the diamonds.’

The facade plays a central role in reducing carbon emissions, helping the building secure its design stage BREEAM ‘Excellent’ rating. Around 40% is triple glazed with a U-value of 0.8W/m2K, a 250% improvement on building regulations. Air conditioning cools the two wings, but the central atrium is naturally ventilated. The end elevations of the atrium incorporate automated louvres, controlled by the BMS, which open at low and high levels to encourage airflow in and out of the building, informed by a computational fluid dynamics model developed by engineer Arup.

Czech Republic-based consultant Sipral detailed, manufactured and installed the ­facade. The unitised curtain walling is hung on a steel frame, fixed back to concrete slab edges to create a watertight line. Two halves of pressed aluminium make up the diamond capping, fixed to the front and rear of transoms on either side of the curtain wall.

Colouration of the external anodised ­aluminium elements was chosen to create a ‘live’ finish and match the hue of the stonework in nearby buildings. ‘As the sun moves the colour of the lattice goes from almost black to a beautiful gold,’ says Cartwright. The internal lattice was powder coated to resemble lead work in stained glass windows.

The uniform depth of the lattice creates a flat external edge profile and end elevations. It is raised by about 10mm from the surface of the curtain wall to allow water to run behind.

Individual sections can be unclipped, via a secret fixing, to enable replacement of ­damaged panels, or to expose the underlying unitised panels for maintenance.

Perhaps inevitably, the Diamond Building’s angular zigzagged facade has ­divided opinion in Sheffield. With the building ­standing in an architecturally diverse area of significant historic buildings from different eras, some have questioned why, as an engineering faculty, it doesn’t reflect Sheffield’s international reputation for steel production.

But if student interest is the true barometer of success, the indications are positive – since the building opened at the end of 2015, the university has seen a 25% increase in applications to engineering courses. For these bright youngsters, at least, diamonds are forever.