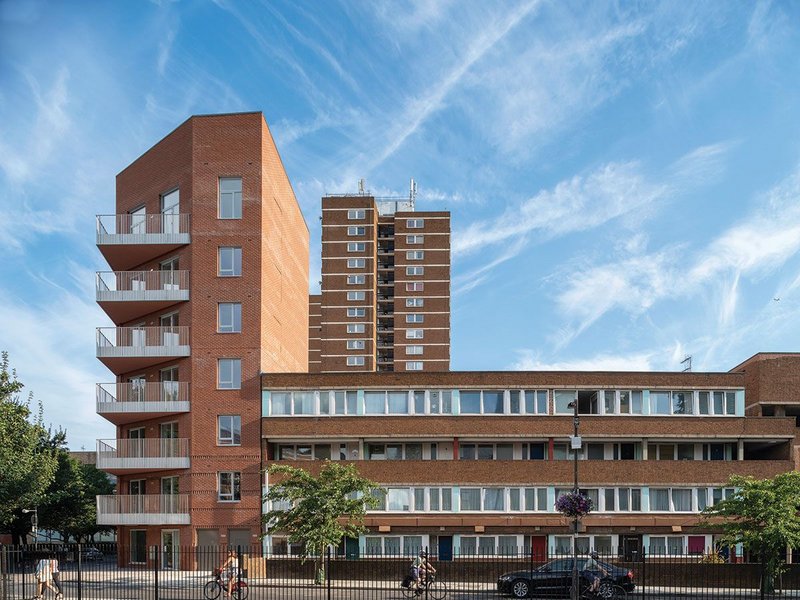 Whatever you may think of the actual architecture, there’s no getting away from the genuine enthusiasm being expressed by the new residents of Marklake Court on Southwark’s Kipling Estate – the result perhaps of the lowest of expectations. ‘I thought they were just throwing up another council block but when they took us to see a lovely (Bell Phillips) block in Grays, Essex I thought “Wow, this really isn’t what I was imagining”, so I decided to sign up to it.’ says Barbara. A week into occupying her third floor two-bed flat she’s already got to know her neighbours from its big balcony. She knows Melanie across the way too, who moved with her son into a top floor flat with two of them – both with amazing views – and enormous ceiling heights. ‘My sister can’t believe I’ve got this place,’ Melanie tells me. ‘Sometimes I walk into this living room and can’t help giggling!’

Bell Phillips’ £7.8 million Marklake Court – a 27-unit block of one, two and three-bed homes for social rent – has been born in a perfect storm of agendas and organisational structures that have combined to produce what looks to be a considered, dare I say it, pioneering model for social housing that could (and should) be rolled out elsewhere. A tenants’ management organisation (TMO) with the vision to procure social housing despite no experience; facilitator Igloo, keen to test its community build offering; and Southwark Council – perhaps reflecting on its controversial sell-off of the Heygate Estate for private development with scant regard for displaced residents – releasing land and funding it to the tune of £9.7 million, and smoothing the scheme through planning.

Occupied last month, the project’s gestation is the starting point to grasp the context that brought Marklake Court about. Leathermarket Joint Management Board (LJMB), founded via an active Neighbourhood Forum in 1996, had in 2013 become the country’s first TMO to become self-financing, meaning that the rents from 1100 of its 1500-home estate (400 were owned under ‘Right to Buy) were under its direct control. Tenant confidence in them was high – in their 2011 continuation ballot 72% of the residents who voted gave them a 96% approval rating – but there was also an identified clear need to provide more and suitable homes, so the JMB conducted a housing needs survey. In an area with sky-rocketing rents, it revealed low level tenant anxiety.

‘We had a dozen tenant consultations before it went to planning, unheard of for a housing project’

‘Some properties were overcrowded, some had mobility needs and some were clearly under-occupied; but it was a case of the devil you know and keeping quiet about it,’ says Rachel Brain, community and communications office to Leathermarket Community Benefit Society (LCBS) – the organisation set up as a development vehicle by the LJMB in 2014 to identify potential sites on the estate and address the housing need through building. ‘With 11,000 people on the housing register you could have very legitimate reasons to be housed and never make the top of the list,’ she adds. Some people who moved into Marklake Court had been on the list for 10 years.

With no experience of housing procurement, the fledgling Benefit Society went to facilitator Igloo, appointing it as development manager for the community-led project. This was earmarked for a site that was, at the time, 12 council-owned run-down lock-up garages at the east end of the Kipling estate, just south of London Bridge station. With £70,000 seed funding from the Greater London Authority, LJMB brought Bell Phillips in to start working up a design. Aiming to use a Community Right to Build Order, Igloo also managed to secure further GLA funds to bring the figure to £323,000 while negotiating with Southwark the transfer of a 125-year lease of the site to the CBS for a pound, on the basis that this was to be a 100% social rented housing with no Right to Buy. Initial funding and land secured, it was then about engaging the local community to respond to dealing with the housing need – critically by encouraging residents of under-occupied or unsuitable properties to release them by offering what were in effect, bespoke, down-sized homes; everything rested on Marklake Court being a big enough carrot to draw them across.

After local consultation, Igloo development manager Kym Shaen-Carter said that residents weren’t against development in principle but that the new homes had to be something they could be proud of and hold in perpetuity. It also meant maximising the potential of the site – in the end the architects were to realise a density of 1050 hr/ha. In carrying out the thorough tenant engagement process through Community Right to Build, they achieved densities that couldn’t have been possible for a private developer or even Southwark itself. ‘Encouraging downsizers to move, we could see that having 27 tenants here would affect more than 100 families,’ Shaen-Carter says of this grass roots social engineering. ‘It was also about demonstrating a community empowered way of generating housing.’

This they did in spades. Overlaying LJMB’s housing survey findings with the Council’s own allocations policy that prioritised local people, the design team knew six months before it even submitted for planning, exactly who it was designing for. The two blocks on a plinth design was to have four one-bed, 14 two-bed and nine three-bed units – the emphasis on two-bed units to accommodate the downsizers who would need a bed for a guest or family carer. All are dual aspect and compliant with the London Housing Design Guide and lower level duplexes have rear gardens. Three flats were built as wheelchair accessible, with one made so later due to one tenant’s ongoing health problems.

But meeting guidelines and standards is not what these flats are about. ‘We had a dozen tenant consultations before the scheme even went in for planning – unheard of for a housing project,’ recalls Bell Phillips’ Hari Phillips. ’We workshopped the scheme asking tenants everything from what were the biggest direct issues in any flat design to more amorphous concepts such their desire for “a building with a sense of purpose”.’ Massing was developed by the architects, but  only after tenants were walked around and asked their opinions on local architecture. It transpired residents were proud of their estate and eschewed more modern materials for its sober brick. They liked Victorian richness of detailing – which saw the architects adopt corbelled and saw-tooth brickwork around the base. And they wanted balconies to face away from the existing low-level courtyard housing to the west to maintain a mutual sense of privacy (hence all those east facing street-side balconies). Not just window sizes and their cleanability, but open plan or separate kitchens, bathroom fixtures, wall tiles and flooring.

Shaen-Carter says ‘every comment we received from residents was registered, responded to and audited.’ This engagement was critical: ‘I would have been reluctant to even consider downsizing if it hadn’t been done this way,’ says Barbara, one of the first to sign up to the design’s community engagement process. And it was a two-way street, explains Phillips: ‘Knowing who the residents were beforehand was a critical part of the project’s success.’

The architect thinks the towers could have been taller, but the key elements are all there; the dual aspect flats with generous balconies, large communal terrace above the duplexes, and reinforcement of the curious staggered street line of Weston Street. There has been a deferring to privacy for the existing courtyard behind; in fact, far from encroaching on it, it’s as if the building has reinforced the estate’s slightly hidden, strange, oasis-like quality – a sense that had previously drained away past the lock-ups to the wider street. Phillips recalls a Twitter spat where an architect had come across the construction site and posted a picture of a sawtooth brick detail supported on a metal angle. ‘The modernists were, like, ‘how could they?’ And the post-modernists were saying ‘What’s wrong with it?’ But it’s a discussion that left him bemused. ‘I think it’s completely missing the point to get hung up on a detail in the context of what’s happened here, because for years the residents, CBS, Igloo and Southwark have been piecing this whole thing together,’ says Phillips. ‘In the end the architecture is just a small part of a much bigger story.’