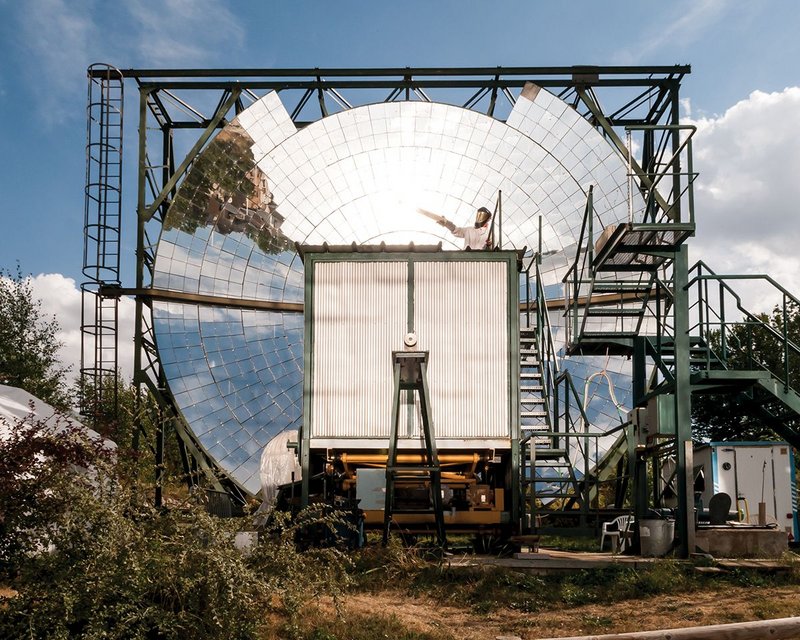 To untrained eyes, this photo might seem somewhat muddled, but for Alastair Wiper, it’s about as close as it comes to perfection. He came to photography long after university and a stint as an itinerant surfer dude, a sous chef in France and a wannabe T-shirt designer. When he moved to Copenhagen and began working at a design firm, the photography just came out of the lack of anyone there to do it; Wiper only knew he was hooked when he realised he’d built a darkroom in his flat.

It’s this sense of pleasing randomness that draws Wiper to his image of engineer Felix Trombe’s 1949 solar furnace, sited in Mont Louis’ clear mountain air. It too was a pet project turned obsession, that spawned the nine-storey solar furnace further down the road in Odeille; whose pure, concentrated heat is still used by NASA to check the resistance of its satellites to atmospheric re-entry.

At first the image just poses questions: about the steel structure, the box, the big mirror in the copse, who the man in the mask is and the reason for that plastic chair. But the answer evaporates the very centre of the image, the effect pointed at by the guy with the stick. The collector’s focus generates temperatures in excess of 3,500˚C,’ Wiper says nonchalantly. ‘It’s about the size of a saucepan.’