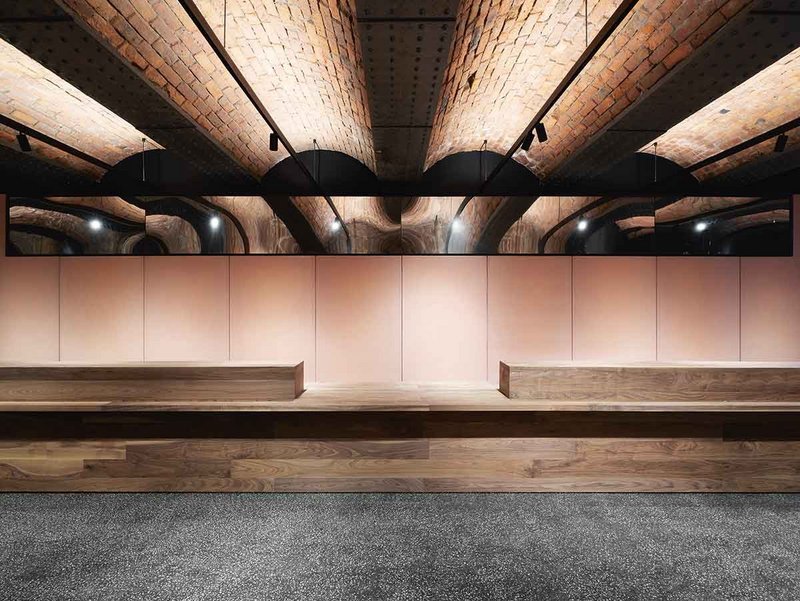 The senses of touch and smell have had a hard rap over the last year, but by way of a partial but prescient redress, Carmody Groarke’s intervention at Manchester Museum of ­Science and Industry actively engages with both haptic and olfactory qualities. Its 725m² ­Special Exhibitions Gallery, constructed courtesy of a £3.8 million DCMS grant, allows the museum to run world-class temporary exhibitions alongside its permanent installations and is the first part of an ongoing restoration and upgrade masterplan.

The new gallery sits beneath the disused viaduct of the old ‘Pineapple Line’ railway, which ran directly into the 1880s-built New Warehouse – now part of the museum campus. The architect has transformed the line’s formerly a guano-infested Lower Yard into the new foyer and gallery and connected it to the New Warehouse and rest of the museum above. Architect Andy Groarke explains that, faced with the uncompromising muscularity of the viaduct’s low brick arches and heavy composite cast-iron superstructure, the practice chose not to compete but to counterpoint it with lightness, while remaining in conversation with the space’s raw tactility. His mention of fibreglass for the backlit panels lining the foyer instantly transports me back to my childhood and the heady pungency of my ­father’s garage, where he mixed tins of Isopon P38 in anticipation of some car bodywork fix. Despite considering possible ‘off-gassing’, the museum’s curators  were convinced by Carmody Groarke’s argument for its use in this context.

‘We thought a translucent material would be fascinating and with fibreglass you can see the quality of the fibres in the coloured resin,’ says Groarke.  ‘It has an unexpected texture – a ‘tooth’ – and bears the maker’s marks within its surface.’ With its physical lightness counterpointing the structure around – ‘it’s backlit and terracotta-coloured but really doesn’t look like a brick’ – the panels’ ‘cast’ nature evokes more subtle associations with its surroundings. Above them, the run of the Pineapple Line’s platforms and rails are ‘impressed’ into the viaduct’s soffit like a Rachel Whiteread writ large.

But those tactile cast panels are more than purely aesthetic. Groarke explains that they are also part of the building’s conservation management strategy; fixed as they are slightly in front of the undercroft’s brick walls, which, half underground, can be prone to ‘weeping’. It means that not only can the situation be monitored, but, if necessary, the new structure can be disassembled to allow access. In this regard, they are not hermetic, but a visual foil to the normal process of moisture infiltration going on behind them.

The delicate differentiation continues as much in spatial as in material ways. As the main foyer environment is specific but only moderately conditioned, so the gallery itself is generic but highly conditioned. International gallery standards demanded a hermetic box set inside the line of the existing masonry, and the firm ran with on-the-face-of-it, go-to approaches, specifying the 4-5m tall gallery walls in Fermacell which allows for easy installation of exhibits and attendant repair. Where it diverged from standard, says Groarke, was in the work the firm did with environmental consultant Skelly & Couch, which aimed to mitigate the gallery’s energy demands: ‘On the back face of the Fermacell panels we applied a hygroscopic clay product, hygroscopic clay board, which is breathable and absorbs swings in temperature and humidity in a passive way.’ In effect, the clay acts as a sponge-like buffer between the ­existing fabric and the highly conditioned ­internal environment of the exhibition space, reducing energy demand. ‘We felt a sense of duty to give the client scope to turn things off as well as on. If a certain show demands intense conditioning, that can be facilitated; but otherwise, the gallery’s materials should be left, as much as they are able, to do their job passively,’ adds Groarke 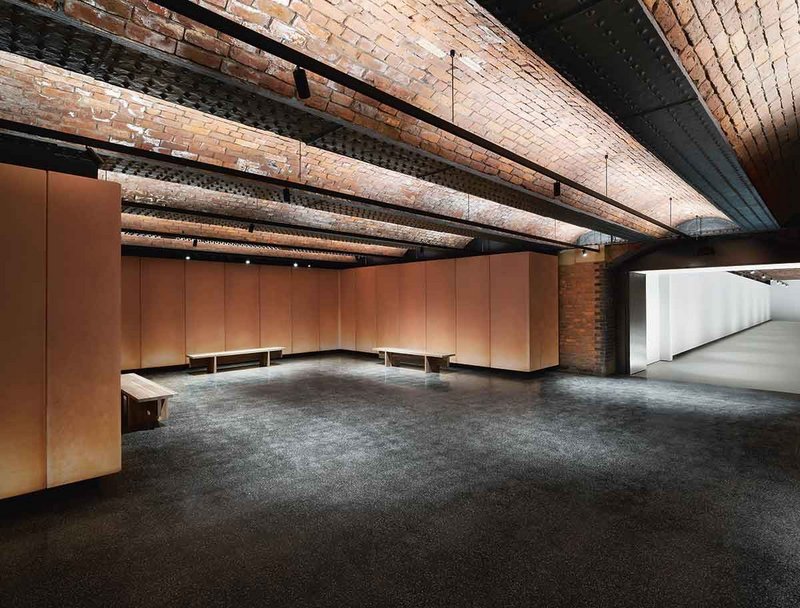 Leaving things to their own devices seems to be what’s going on outside too, where, as much as possible, the viaduct has been left as found, with ‘the experience of standing on these damp, dark spaces fundamental to understanding the history of the warehouses’. But the act of drawing the backlit fibreglass panels out into the exterior realm has reaped dual rewards. Not only does it signpost the new gallery space to visitors as part of the wider campus masterplan, but in removing ancillary lighting furniture, they practice has also dispensed with all the roosts and pigeon spikes – another passive approach that has bigger knock-on benefits.

Creating new connections both to itself and, in reconciling the level changes, with the developing St John’s and Castlefield neighbourhoods around it, the gallery’s inaugural show will soon be able to welcome visitors to its environmentally stabilised, clay-coloured cave, to illuminate the past and offer new light at the end of what has seemed a very long lockdown tunnel.