Resembling a gargantuan DNA string taken right out of the 60s sci-fi ‘Incredible Journey’, Wilkinson Eyre’s new spiral staircase in the upper lobby of London’s Wellcome Collection is doing some organic connecting of its own. The stair is part of the firm’s project to update Wellcome’s public exhibition and outreach spaces to deal with burgeoning visitor numbers – projected to reach up to a million a year over the next decade. The £1.1million steel and glass spiral staircase, elegantly linking the foyer space to first floor galleries, and second floor library, AOC-designed reading room and restaurant, is a key circulatory link, performing the dual function of opening the spaces out to the public in section as well as acting as a visual signifier of the wholesale internal reinvention behind its 1930s neoclassical facade.

With the lift core and stair hidden at the back of the building, Wilkinson Eyre was keen that the new vertical circulation should also form a strong visual statement. Associate Gabi Code says the firm did use DNA as an inspiration, but that in fact the form of the handcrafted steel stair was based on far more practical concerns. Visibility was all – hence the decision to make the outer balustrade glass to accentuate the movement of visitors through the space. This left the inner balustrade and soffit of the stair to be formed of 8mm thick mild steel plate, brought over in 12 sections and welded together on site. Code says there was a desire to avoid the idea of applique and to allow the materials to speak – even on making a distinction between outer and inner steel surfaces. As a result, the outer face was shotblasted and simply lacquered while the internal was shotblasted, cold-sprayed zinc and then hot-sprayed with stainless steel. While the stair design was modelled in Rhino, the firm was keen, in an increasingly pre-fabricated world, to express the handmade quality of its rolled and pressed plates; so much so that just polishing it in situ took one man a month’s labour to perform.

Engineered by AKTII, part of the stair is box section, but the main supporting load is carried by the spiral of the curved steel soffit connecting back to the building’s original secondary steels supporting its laminated timber joist floors. Reflecting the lighter footfall to the upper reading room level, the Mareuil limestone treads reduce in width as it ascends between floors, creating a strange trompe l’oeil perspectival effect when looking up from the ground floor stairwell. The firm reconfigured the circulation areas on both floors to create generous spaces that not only give the stair room to breathe as a sculptural object in itself, but will allow for those projected visitor numbers.

Wilkinson Eyre’s spiral intervention has proved a bold master stroke in a building that formerly lacked any sectional logic, creating new gallery conditions and a circulatory artery that should keep Wellcome Collection’s vast medical archive, and the public’s future access to it, in rude health. 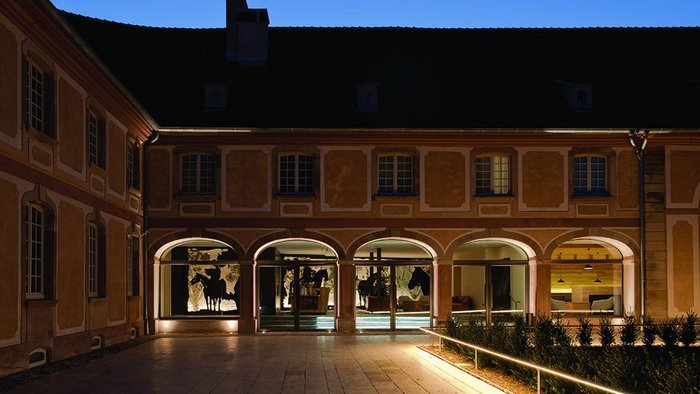 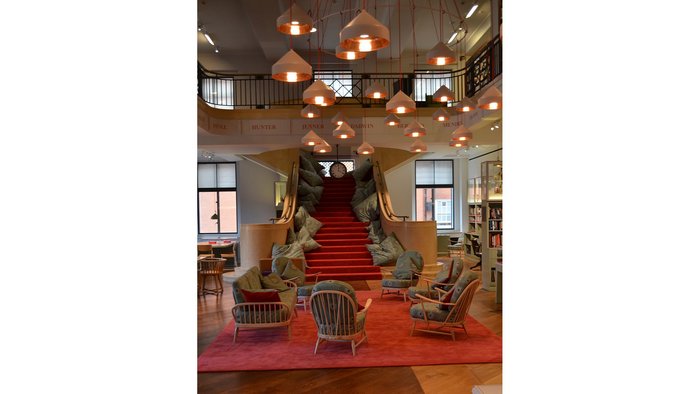