When Populous designed the 2012 Olympics (now London) Stadium, it was the first cable net roofed stadium in the country. Now, the same architect has completed the second such structure, this time at the long-awaited new stadium for Tottenham Hotspur Football Club in north London.

Although delays had pushed back the opening to April, now that the stadium is finally up and running the atmosphere inside – most notably the wall of sound created by the 17,500 seater South Stand – has been widely praised. So much so that the stadium’s much anticipated, ingenious retractable pitch (to enable dual use for NFL American football) has had to play second fiddle.

This acclaim is gratifying for the design team, which took the club’s brief for a stadium that creates memorable experiences to heart. And it is the roof, as well as the asymmetric stadium bowl itself, that has had a key part to play in this atmosphere by amplifying the sound through the carefully designed acoustic treatment of its underside.

The new 62,062 capacity stadium is part of a wider regeneration of the Tottenham area, with further residential and hotel development to follow. A redevelopment of the original White Hart Lane ground, the project had to contend with proximity to Tottenham High Road and residential areas as well as delivering exemplary sporting and hospitality facilities. Another key factor in the design of the stadium was construction time – the club wanted to minimise the time spent at its temporary home venue of Wembley, so speed of erection was a priority.

Populous aimed to create what principal Mark Craine refers to as ‘a cauldron of atmosphere’. At the heart of the design concept is the tight seating bowl, arranged as a horseshoe meeting the all-important South Stand behind the home goal. This stand is unprecedented as a single-tier, and is some three times the size of the previous home end. In order to achieve such a high capacity on a tight site and maintain excellent sight lines, the super efficient stands are angled at 35˚ – the maximum pitch allowed –and seats are compact rather than generous in depth and width. Hospitality boxes are kept to the east and west sides so as not to disrupt the atmosphere of the end stands. Further extensive hospitality facilities are contained in nine levels of stand accommodation, including a dual aspect Sky Lounge with views both into the stadium and out at the top of the South Stand. Externally, the facade is clad in a mosaic effect of perforated metal cladding which wraps into the roof to give the full enclosure essential for noise control.

A steel truss roof was initially considered but the firm opted for a cable net structure, created using form-finder software to achieve the distinctive irregular geometry and accommodate expected movement. As well as being far lighter (600 tonnes) and more elegant, this had the advantage of ensuring that the roof structure wouldn’t comprise views from the Sky Lounge.

The structure uses an oval compression ring at the back of the stands created from a welded steel box girder about 700m in length. This supports two tension rings – one upper, one lower – which in turn support the roof above. The tension rings are connected back to the compression ring by 54 upper and 54 lower radial cables measuring approximately 42m and 38m long respectively. There are four flying struts per radial grid making a total of 216 between the two rings. The upper and lower tension cables are connected between the compression ring at the back of the roof and with ‘flying columns’ at the front, which vary between 12m and 15m in length. The maximum span from the roof edge to the compression ring is about 65m above the South Stand.

After extensive preparation laying out the galvanized steel cabling, the cable net structure was lifted into position and tensioned in just two weeks, with six cables supporting the lower ring and four supporting the upper.

The transition between roof and facade was navigated with a curved eaves in standing seam aluminium. The 30,000m2 roof area was then covered in two different ways. It  is mostly clad in 270 insulated roof cassettes – five per radial bay – supplied by Buckingham. Each cassette is roughly 8m long and tapers in width from around 15m at the back of the roof to 10m at the front. These are topped with a metallic finish polymer membrane that had been pre-bonded to the substrate and finished with an aluminium panel underside.

However, the perimeter section of the roof closest to the pitch needed to be transparent to ensure that enough sunlight reaches the pitch to keep the grass healthy. Most stadiums have a transparent polycarbonate but Populous and Spurs preferred the higher quality of bonded glass. This was achieved using 1,200 panels of extensively tested bonded structural glass, also supplied by Buckingham.

‘It’s just a better quality way of doing it – polycarbonate does go cloudy over time,’ says Craine. ‘It’s great that we’ve had a client who’s been open to pushing boundaries and is very focused on the best quality.’

The design of the opaque roof section was vital in creating the stadium atmosphere. Populous worked closely with acoustician Van Guardia to ensure the desired balance of sound absorption and reflection so that the sound from the stands and public address system was neither too quiet or too deafening. The solution was a combination of perforated and solid panels to generate the required wall of sound – the rear third are perforated and the rest are solid.

Where the glass and metal roofing meet, a ‘relief valve’ detail allows air to move between the two.

Visual simplicity and a lack of roof clutter was a priority, with services integrated into the flying columns, which each house six LED sports lights. ‘It’s all very simple. Nothing is left exposed,’ says Craine. ‘You don’t see a lot of services but there’s an awful lot of services up there. We’ve kept everything very clean. It doesn’t look like there’s a lot going on but there is.’

In each corner are massive screens so spectators can see close ups of the action.

The designer is satisfied that the roof has helped give the ground a unique visual identity. ‘When you look at the stadium on television, it can only be Tottenham,’ says Jones.

Anyone wanting to get a really close look at the roof will soon be in luck – the club is planning to open a ‘sky walk’ experience giving intrepid visitors a view down through the glass into the stadium as part of a walk past the large golden cockerel resplendent on the roof top of the South Stand. 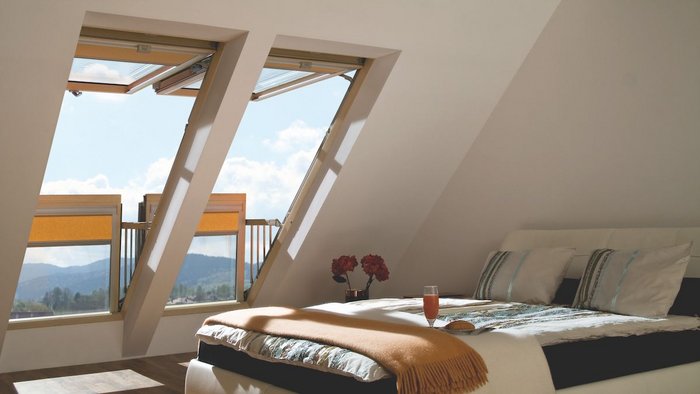 Roof window that becomes a balcony 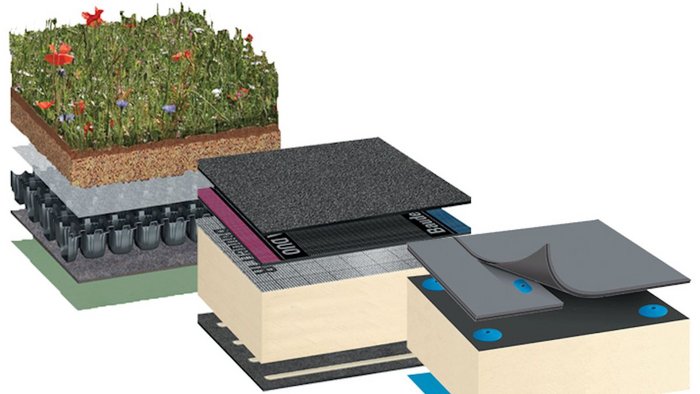 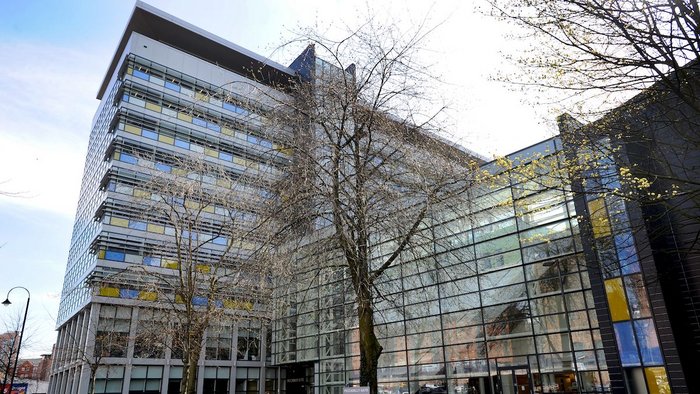 In association with Kemper System