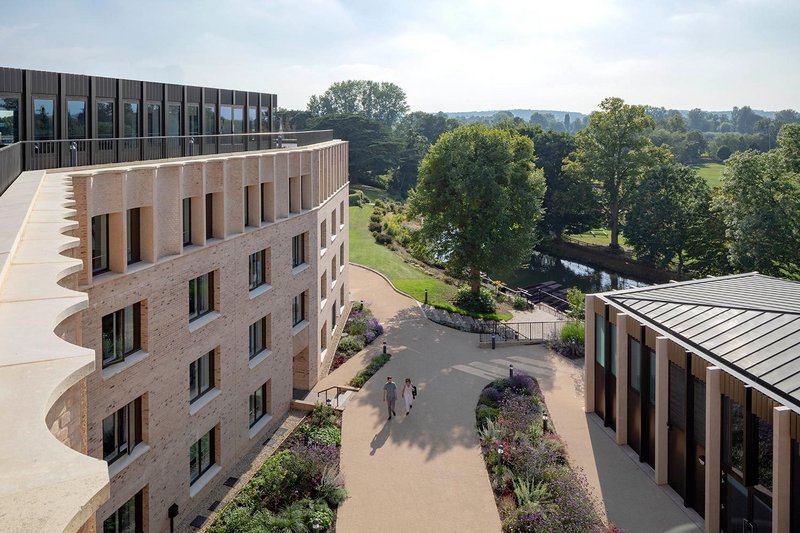 The repositioned entrance brings visitors through a short colonnade into the heart of the campus. Credit: Peter Cook

St Hilda’s College Oxford has a new front, but it’s not the real ‘front’ – that’s at the back, where an eclectic string of buildings faces the city’s prickling roofscape across a swathe of green and the River Cherwell. Replacing a car park and a motley group of small buildings, Gort Scott’s substantial addition to the estate presents a rather plain face to the street, saving its more expressive features for the private interior of the campus. That runs counter to expectations in most places, but echoes a common arrangement at Oxford colleges. It’s one of many ways in which this thoughtful block of tutors’ offices and student bedrooms is tuned to its setting within the college and the city.

For a start, St Hilda’s has acquired its own dreaming spire – or rather, a lantern-topped tower. Rising from one end of the long, cranked Anniversary Building, it marks the repositioned main entrance. ‘Obviously a big thing in Oxford is the roofline, and the way buildings engage with the sky’, says architect Jay Gort, who leads the practice with co-director Fiona Scott. Cost constraints kept it quite short, but not so you’d notice. At the top, a double-height glass box is buttressed by slim concrete fins that lend vertical emphasis. Capped with a gilded halo of foliate metalwork, the tower dissolves into the air in a deliberate reference to the finials of other colleges.

Providing a distinctive landmark was important. St Hilda’s is one of the newer colleges – founded as a hall for women in 1893, it went co-educational in 2008 – and has a slightly out-of-the-way location, down a quiet lane on the ‘wrong’ side of Magdalen Bridge. From its first premises in the former home of 18th-century botanist Humphrey Sibthorp, St Hilda’s expanded into a series of newer buildings along one side of Cowley Place. There’s interesting stuff among them – including the Smithsons’ 1970 Garden Building – but nothing that might act as an emblem of the college. 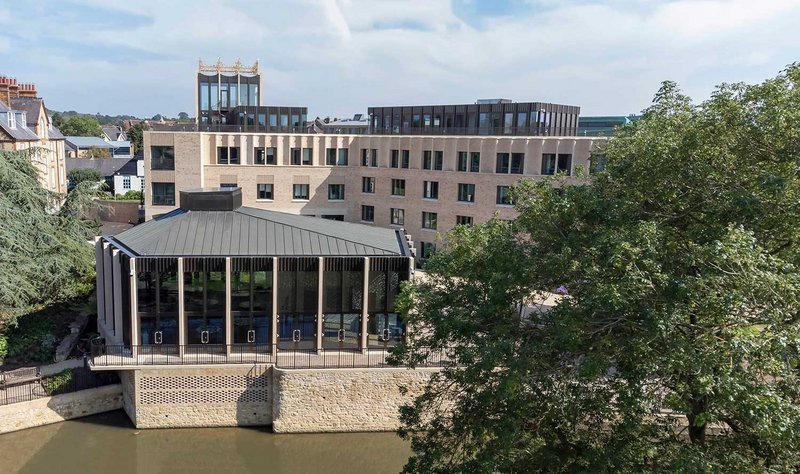 View of Pavilion and Anniversary Building over the Cherwell. Credit: Peter Cook

The plain facades from which the tower rises are perhaps too austere, especially where the lane turns a corner towards the former entrance gate. A regular array of punched windows betraying cellular bedrooms is set into an expanse of yellow brick that is otherwise largely unrelieved. Waiting there to meet the architect my hopes for the building faltered, but they picked up again as soon as we entered the campus.

Passing through a short arcade at the north end of the Anniversary Building, we arrived in the middle of the long, lush garden that lies between St Hilda’s fluid ribbon of buildings and the river. From there, all Gort Scott’s major moves come simultaneously into view. Behind, the kinked west facade of the Anniversary Building is enlivened by pronounced depth and texture. ‘It was important that this felt like a carved building, grounded and earthy,’ says Gort. Panels of chevron brickwork – a pattern picked up from the neighbouring building – enhance the apparent size of windows. On the top storey, a heavy scalloped frill quotes a shell motif found in the college’s oldest building. Afternoon sun creates a powerful play of warm brick and strong shadows.

Immediately ahead, on the river’s edge, lies Gort Scott’s second, smaller building – a pentagonal pavilion used for lectures, dinners and concerts. It has a more elegant, lightweight character, with a shallow-pitched zinc roof and lots of glass framed by acid-etched and polished concrete piers, but is tied to its larger neighbour by a few details. Dark bronze metalwork recurs in two rooftop ‘pavilions’ on the Anniversary Building, and leaf-patterned sunscreens recall the tower crown, as well as botanical ornament in Sibthorp’s house.

Making space for both new buildings involved removing a residential block that bisected the gardens. That option was identified by a feasibility study ahead of the competition for the project, but the college’s client group was nervous about losing a building with sentimental value. They were reassured when all five shortlisted entries endorsed demolition. From a strong field, Gort Scott’s proposal was chosen for the ‘intuitive and natural’ way in which buildings are integrated into the organic complex. And that’s the real strength of the completed scheme: the twisting and tapering Anniversary Building bridges between ranges at either end to make a firm, continuous boundary to the street, and pulls back enough on the river side to open long uninterrupted views through the campus. ‘We understood that the project would give us a new relationship with the riverfront’, says acting principal Georgina Paul, ‘but it has also given us the garden’.

The landscape of lawns, planted beds and ancient trees now flows around the pavilion like a stream around a stone. Built off the stone plinth of the demolished building, it perches high above the Cherwell, with a narrow deck that ties into a riverside walk. That elevation keeps the building out of the flood zone and allows it to be cooled by river water flowing through a labyrinth beneath. It also reflects the project’s accessibility agenda: on a sloping site, step-free landscaping allows wheelchair-users to reach all parts of the new buildings. (Chemistry professor Lorna Smith, who led on that aspect, makes an arresting observation: the growing number of wheelchair-users at Oxford follows improvements to provision in secondary schools; accessibility has ramifications beyond any individual institution). Inside, the gardens feel very present. Big windows frame close-up views of giant ferns and a spreading Cedar of Lebanon, while the brises-soleil cast plant-like shadows on the walls and oak floor. ‘It has become the most cherished space in the college’, says Paul. 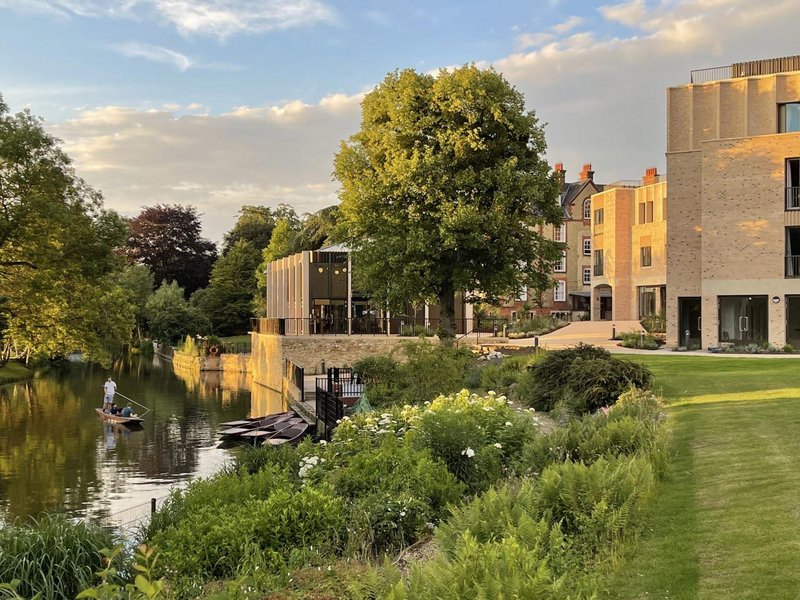 View from the South Lawn towards the Pavilion and gardens beyond. Credit: Amu Chandrakumar

Interiors of the Anniversary Building are, for the most part, more utilitarian. It is in effect two buildings of different heights that meet at an angle, invisibly conjoined by clever adjustments to the facades. At the three-storey northern end, offices wrap around a central ventilating atrium. The initial intention was that rooms should be fronted by timber ‘furniture screens’, but after value engineering that was supplanted by white plasterboard. To the south, where the site falls and the block narrows, four floors of study-bedrooms are arranged on double-loaded corridors, and have similar finishes. Painted concrete soffits and round polished concrete columns add some visual weight as well as thermal mass. Jay Gort estimates that the square-metre cost of the £18.5 million design and build project was perhaps half that of similar buildings at richer colleges, and resources have been concentrated in special areas. They include the ground-floor porter’s lodge, a light-filled eyrie at the top of the tower and a serene seminar room in a rooftop pavilion, surrounded by a planted terrace with views over Christ Church meadow.

Standing up there with several of the college fellows who formed the 38-strong client group, it’s clear that they have been closely involved in all parts of the process and remain surprised and delighted by the outcome. There is a feeling that with this project – completed exactly 100 years after women were first allowed to receive degrees – St Hilda’s has grown into itself. The buildings and landscape reflect the inclusive and informal atmosphere that the college aims to foster, while claiming its place in the city. ‘We’ve always looked out on medieval towers, and now we are recognisable from the other side of the river’, says development director Bronwyn Travers. ‘When I first saw golden light falling on the crown, I just thought “Yes – we’ve arrived”.’