Jamie Fobert and Evans & Shalev form an odd couple at Tate St Ives, but the Atlantic light, and the art, make the relationship work 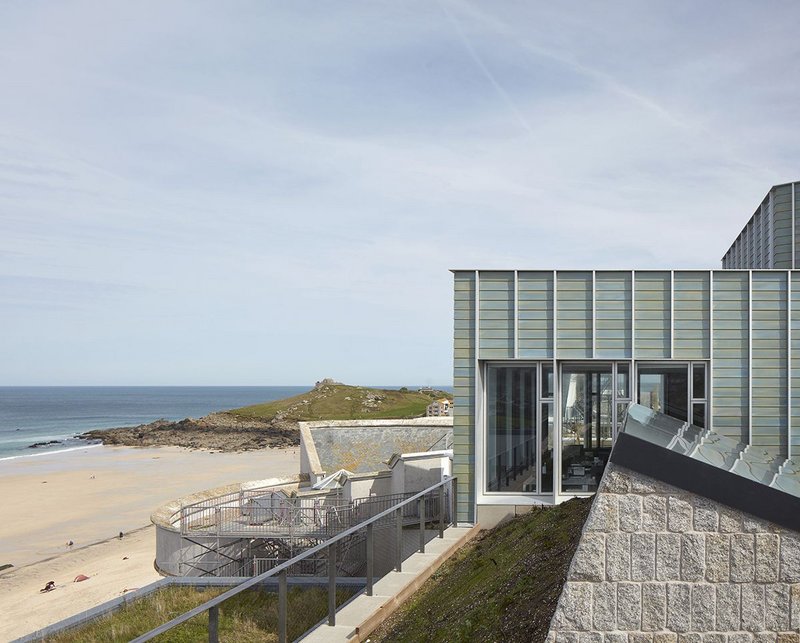 The new upper storey of Tate St Ives has emerged above Porthmeor Beach after a decade of wrangling. Credit: Dennis Gilbert

‘This is a town of tiny rooms,’ observes Jamie Fobert of St Ives. He’s standing in what must be the town’s largest space by far – the 500m2 gallery in his extension to Tate St Ives, which opens this month.

It has only arrived after more than a decade of kerfuffle with local residents who feared a massive architectural outcrop above the lichen-spattered slate roofs of the cottages that jigsaw down the hill to the harbour. At one stage the Tate considered moving its operation elsewhere in Cornwall because of the impasse.

The locals needn’t have worried; two competitions and a land swap later Fobert’s extension is barely visible unless you are paddling at low tide and look straight back up Porthmeor Beach. 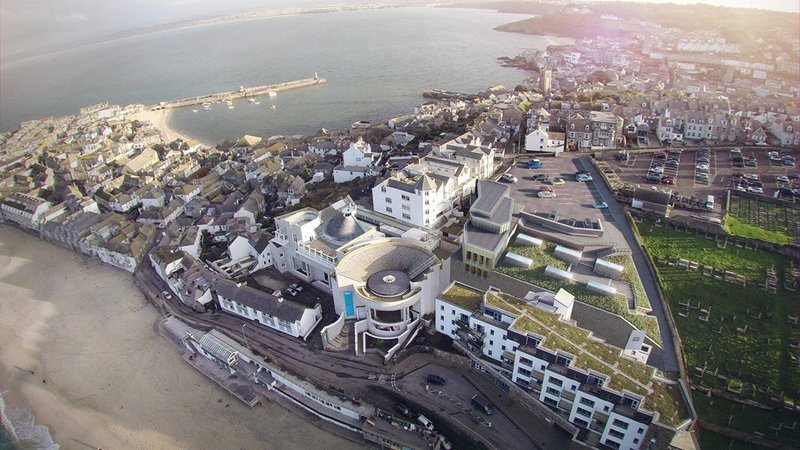 Because the extension is hidden in a 9m deep slot cut out of the cliff and screened by a drab new block of sheltered housing flats by local practice Poynton Bradbury Wynter Cole, the view is still dominated by Evans & Shalev’s curious amalgam of postmodernism and brutalism of 1993. Rough as a barnacle on the exterior and with a ferocious rotunda entrance, inside this dirty white, prickly structure are soothing gallery spaces arranged enfilade where baroque light washes down large covings from rooflights hidden along the margins of each room.

Fobert’s is the second stage of the Tate St Ives’ expansion; Evans & Shalev was also invited back to extend its own work in a highly successful project that opened at the end of March.

In the 20th century, St Ives was the locus of modernism in English art outside London. In a spirit of innovation and radicalism, Hepworth, Nicholson, Gabo and others settled in the fishing village from the 1940s onwards, continuing a tradition that stretches back via the celebrated ceramicist Bernard Leach to the 19th century. On the St Ives peninsula big skies and surrounding seas bounce the soft Atlantic light in all directions.

Seeking to safeguard this heritage, the Tate acquired Barbara Hepworth’s nearby studio and sculpture garden in 1976 after Hepworth burned to death smoking in bed, and in 1984 held a competition for a new gallery for contemporary work that was won by Eldred Evans and her partner David Shalev.

Evans’ early career included working and playing with James Stirling and being described as the ‘brightest student at Yale’ by fellow student Richard Rogers, but her modernist work was largely unrealised or was demolished. She may well reject the postmodern label but that’s precisely what her comeback pieces – the law courts at Truro and Tate St Ives – were, even if here on the coast this is expressed as classically derived severe geometries rather than funny finials and, as mentioned above, somewhat brutal with it.

The massive entrance drum with its coffered soffit was inspired by the rotunda at the National Museum of Wales and also recalls the town gasworks that once stood on the St Ives site. From angles where the drum doesn’t dominate, the gallery’s volume successfully mediates between the cottage grain of the lower town and the 19th century villas on the clifftop.

Large rooflights which protrude out of a landscaped roof bring light into the new Jamie Fobert Architect-designed galleries below. Credit: Hufton + Crow

The practice’s new work begins immediately after the rotunda, shifting the reception back a room so it now sits opposite Patrick Heron’s immense stained glass window. This is the beginning of the gallery’s picturesque internal route up the cliff face (the severe level changes had to be tackled either outside or in) via a series of lobbies, half landings, windows to the ocean, and an elaborate, meandering, staircase that in its ladder detail has something of the Mackintosh about it.

Many of these spaces have now been refur­bished and will hold the permanent collection that tells the chronological story of St Ives art from the 19th century onwards. Grey paint and the subtle wash of St Ives light punctuated by sharp cornices and archi­traves are a handsome frame for one of the country’s most vital art traditions, while the upper levels of the rotunda offer two dress circles for larger works from the 1960s and ’70s.

Evans & Shalev’s boldest intervention in its own work was infilling a light well to create a stack of new learning spaces. This insertion is topped by the Clore Sky Studio, a semi-circular learning space at the top of the building which gives on to a roof terrace and has a conical slate roof topped by a lantern. From the outside it looks like a vernacular move that embeds the addition more positively  in the townscape, but from within the white space appears to have a vague sectional relationship to Stirling’s Venice Biennale bookshop. 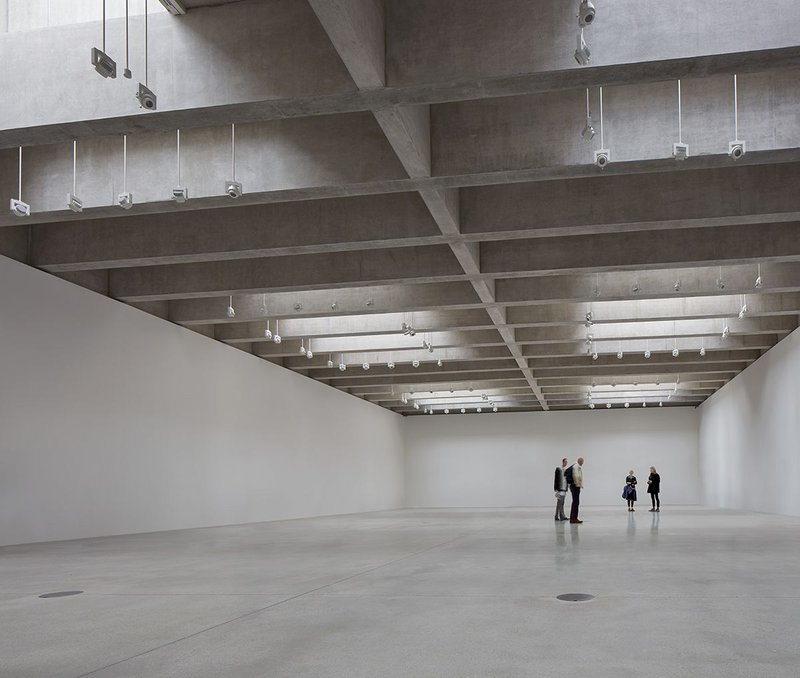 The art gallery was recently included in the Twentieth Century Society’s 100 Buildings 100 Years celebration and will no doubt be a tentative candidate for listing soon. Before that happens, further changes to the entrance sequence would be beneficial, including removing the bin stores from along a grubby fin wall which is your first physical encounter with the building when arriving from beach level.

While Evans & Shalev was revisiting its earlier work, Fobert was refining his extension. The first version involved a dramatic staircase contained in a blade leading up to the new gallery wing on a former car park on the clifftop. Cornwall council’s purchase of the site allowed it to be altered. Some social housing units were demolished and the sheltered housing block constructed, freeing up an area directly adjacent to the Evans & Shalev enfilade – once 900 or so truckloads of granite had been chiselled away.

Fobert’s second version of his gallery (for which he had to hurdle another competition) is now the crescendo after the small rooms of the enfilade. A limed oak portal with a horizontal emphasis makes you duck before you enter the heightened scale of this new wing, a vast raw concrete room built into the cliff. An inspiration was Sverre Fehn’s Nordic Pavil­ion at Venice, expressed here in the concrete beams that span the space. But whereas Fehn’s building is flooded with light, here it is carefully controlled: six whopping concrete lanterns up to 4m in height are located above the 1.2m deep beams that are themselves 5.5m above the concrete floor.

Externally these rooflights (and the north wall of the gallery where an alarming gouge in the slope separates gallery from neighbouring housing) are clad with granite blocks and they create volumes in a landscaped area that echo the stone chapel in the graveyard next door.

Working with environmental engineer Max Fordham, Fobert’s aim was to capture and filter southern light without it hitting the walls. According to Fobert’s recounting, Fordham thinks that designing art galleries with north light was ‘the biggest mistake of the 20th century’. North light is perfect for creating art, reckons Fordham, but too cool and blue for viewing it.

The natural light is most welcome in the face of the trend for many galleries to be windowless in order to allow for as many different art media as possible – an approach recently taken to the extreme in Thomas Heatherwick's claustrophobic gallery spaces at Zeitz MOCAA in Cape Town.

‘The light is the reason artists came to St Ives in the first place,’ says Fobert. 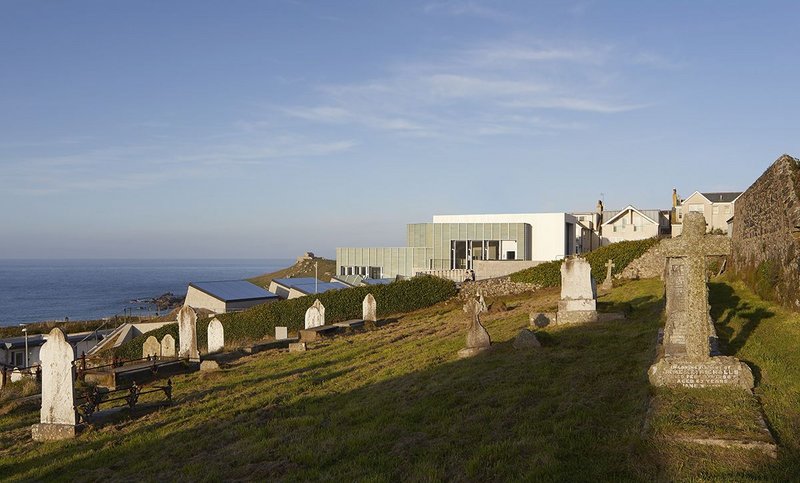 Even so, having the daylight pool at the centre rather than continuing the margin wash of the Evans & Shalev spaces emphasises the discontinuity in character between old and new wings. There has been little attempt either inside and out to unify the two and they physically connect for only a 4m wide strip.

Fobert’s gallery can be subdivided in multiple ways with temporary walls that bracket to fixing points on the beams, but for the opening show of Rebecca Warren’s sculptures it is used as one large volume.

A vital contribution of the new wing, and the second reason for expansion beyond the gallery’s burgeoning visitor numbers, is improved art handling.

Before Fobert’s addition, only smaller art works could easily be handled which limited the type of contemporary additions. Now a ceramic clad turret acts as a hinge between the new gallery and the older building. It houses a large lift that descends to the gallery floors from a get-in at clifftop level, plus offices and a staff room.

Concrete lined internally, on the outside the turret is covered in stacked, overlapped tiles between anodised aluminium verticals. The tiles are a delicately misty blue-green whose appearance changes with the weather. Initially, when seen from Porthmeor Beach, it appears an overly strong gesture, but it grows on you. From the town side, all that’s visible is a small pavilion and the giant folding doors of the get-in at the end of the car park.

Evans & Shalev’s approach is almost the inverse of Fobert’s – the former uncompromising on the outside, almost gentle within, while Fobert combines external reticence with a statement interior. The first suits the historic artworks well, the second is right for the contemporary ones. While this makes for slightly ‘odd couple’ arrangement, it is one that works because the light and art are at the heart of the relationship.