Constructing the new £50m building for the Glasgow School of Art – in the shadow of Mackintosh’s masterpiece – requires close working between architect, contractor and client. Collaboration and unity of purpose are critical

Douglas Anderson’s mobile rings. As we walk alongside Blythswood Square he listens with the odd non-committal murmer. ‘I trust you Peter,’ he finishes and puts the phone away. We had spent the last half hour standing above the foundations of the new Glasgow School of Art building. ‘McAlpines,’ he explains. ‘They thought we’d been looking at the concrete work and seen it was out of phase.’ Though he wasn’t concerned about the misphasing he is pleased that someone has rung to explain. As Glasgow School of Art’s estates development project manager he needs to know what’s happening on the site.

This £50 million project opposite Charles Rennie Mackintosh’s School of Art has been the subject of much debate. It was put out to international competition and won by Stephen Holl Architects with the Glasgow office of JM Architects. The decision attracted some stick: informed local observer and architect Alan Dunlop complained that their ideas were not the best designs. This was followed by respected critic William Curtis damning the proposals for ‘mute assertion’, ‘bland geometry’ and ‘indecisive details’. More recently the school’s new head of architecture Christopher Platt has publicly raised some cautionary notes. And inevitably generations of architects who went to the Mackintosh School of Architecture have a keen interest.

When Anderson was offered the job he thought long and hard about it. ‘Even Holl I hadn’t heard of before. I studied it to see what I was getting into,’ he says. He had been working as head of Strathclyde Police property services but having trained as an architect he was keen to get back into a role with more architecture. In fact Anderson has been shadowing Charles Rennie Mackintosh for years having gone to the same school as him, then studied at the Mac and worked for Keppie Henderson, the practice Mackintosh was attached to. Keppie Henderson also designed the three 1960 and 70s buildings – Foulis, Newbery Tower and the Bourdon –  which are being replaced or reconfigured in the Garnethill campus masterplan. (‘Getting rid of something is always disturbing,’ Anderson admits, recalling the Foulis and Newbery demolition.)

He is sold on the ideas of the project. ‘I’m signed up a hundred and ten per cent,’ he says. ‘We want a beautiful building, of course we do. We want to do this as they did in the 19th century with Mackintosh.’ Around the viewing platform above the hole that is the phase 1 building are stick ups of Holl’s concept drawings. Analysis of the multiple ways light is brought into Mackintosh’s building underpins the big moves of three  ‘driven voids’ through the building to bring in light from above and recreate Mackintosh’s complex alchemy of illumination. The second big idea originated with the school’s desire for ‘creative abrasion’ – the rubbing up against one another of disciplines from product design or printmaking to silversmithing. This is one of the factors in the Glasgow Miracle, as the generation of contemporary artists, including Nathan Coley and David Shrigley, who emerged from the school have been dubbed. This process is crystallised through a ‘circuit of connection’ of stepped ramps connecting the levels of the staggered section.

At JM Architects’ central Glasgow office Anderson and I sit down with project architect Craig Tait, project director Henry McKeown and a screen. A few minutes later we are connected to early morning New York and Chris McVoy, partner in charge of the project for Holls. Anderson sits back and keeps quiet: this is architect territory. McVoy is full of praise, both for the selection process that put approach rather than design first and for the leadership of the school’s director Professor Seona Reid in giving a strong direction to the project task group. ‘A good building is only 50 per cent architects. It needs a strong client who is interested in details,’ he says.

It is down to the details now. Anderson is astounded, but pleased, by how much both practices are involved. On his recent monthly visit McVoy worked late into the evening at JM’s office on the position for radiators and drawing the bolts freehand, trying to make the best of the refectory. Another concern is where the stanchions meet the guardrails. Testing and refinement using large scale mock ups by the contractor have been an important part of the project. A contractor-led method of steel shuttering for the ‘voids’ has a thumbs up from all parties for its smoothness. Samples of the concrete finish led to a unanimous decision on boarded concrete that also saved £200,000.

So which questions does the client direct to which practice? ‘I would always go to Craig,’ says Anderson. Being full time on the job and in the same time zone Tait is also tuned into the team spirit. ‘I would get the same answer from each practice,’ adds Anderson. There were tough questions from the early submissions about practices’ commitment and what would happen if things went wrong. Both always aimed to  present a face like one seamless studio and Tait certainly feels it has come to be. ‘Holls’ expectations have become ours,’ he says.

And the sensibilities of all on the project make a difference, from the aesthetically informed staff to the architect-trained head of contractor-led design portions for Sir Robert McAlpine. McKeown is enthusiastic about their day to day client contact. ‘Douglas is an architect, so he has a sensitivity. He is an important bridge between the team and the client – not a QS with a badge on.’ With a ‘bunch of architects’ leading the project the school didn’t want to give away any of the role. The school’s project website emphasises the ‘architect-led’ team. There was a stumbling block to this approach, as the Scottish Funding Council, which is bankrolling the £50 million project, has a strong preference for design and build contracts. But for Glasgow School of Art it accepted the school’s argument for a traditional JCT contract. The major stipulation was that an independent contract administrator would oversee the architects’ instructions.

This means the scrutiny of any change is magnified, especially if it affects cost or the programme. And that and the build is where Anderson’s concerns now lie in the harder conversations that still have to be had post tender. Having worked in both private and public sector he has a sense for the different pressures on the two. ‘The main contractor is in it for profit but the school is not. As an institution we have to query things that cost to change,’ he says to me in a quiet moment. ‘We have to look out for our own interests.’

As we close the connection to Holl’s office Anderson grows more animated.  ‘Contractors see change as a cost [to them] even when the overall cost is less,’ he laments. McKeown brandishes a bracket while Tait pulls out a rainscreen sample to show how they are still refining, reviewing and testing elements from the subcontractors. Anderson reverts to being one of the team. It is how he likes things to be. He operates on trust and human relationships rather than a position of power. Could this interested but light touch approach be the key to delivering a home from which the next generation of the Glasgow Miracle can emerge? 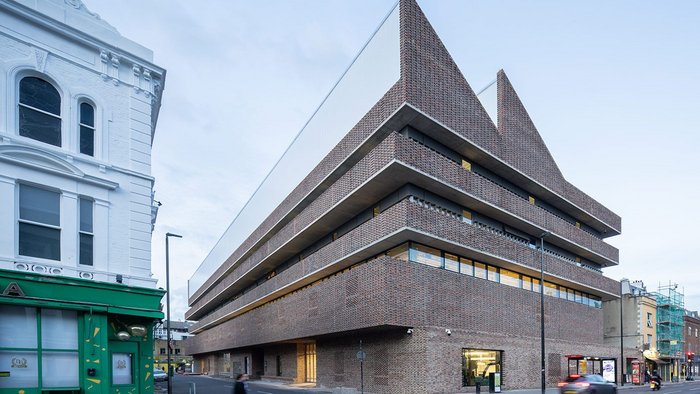 Make's mixed-use reimagining of a former post office in Fitzrovia