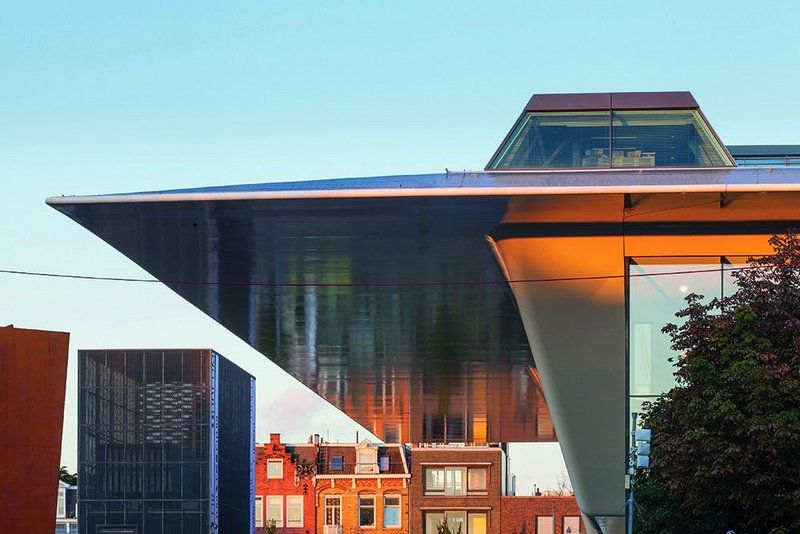 View looking west at the 12m cantilevered overhang of the south-facing facade of the museum extension. Reflections are barely disturbed, as in a canal.

Cutting an imposing figure on Amsterdam’s Museumplein with its huge, composite-clad bathtub-shaped extension, the Stedelijk Museum has, not for the first time, been redefined by the colour white. Way back in 1938, when the city was amassing a world class collection of Picassos, Braques, Chagalls and Kandinskys, the avant garde Willem Sandberg chose a wholly new way to curate the works that heralded the new thinking of the 20th century. Eschewing the internal polychromy of architect Willem Weissman’s 1895 neo-renaissance edifice, Sandberg did the unthinkable and exploded white paint all over the building’s internal walls – making the museum, with the recently opened MOMA in New York, one of the first of the ‘white cubes’, that have defined modern art galleries ever since.

Interestingly, responsibility for the design of the just-completed extension fell on the shoulders of the architect son of Wim Crouwel, another Stedelijk luminary, whose graphic design and typography defined the museum from 1964. After 20 years of abortive competitions that saw off the two previous winners Robert Venturi and Alvaro Siza, the contentious extension to the Stedelijk Museum was finally built by Dutch practice Bentham Crouwel, with a radical contemporary white design that not only turns the museum inside out but also flips it round 180 degrees, creating a new main entrance from the Museum Square side rather than Paulus Potterstraat to the north. 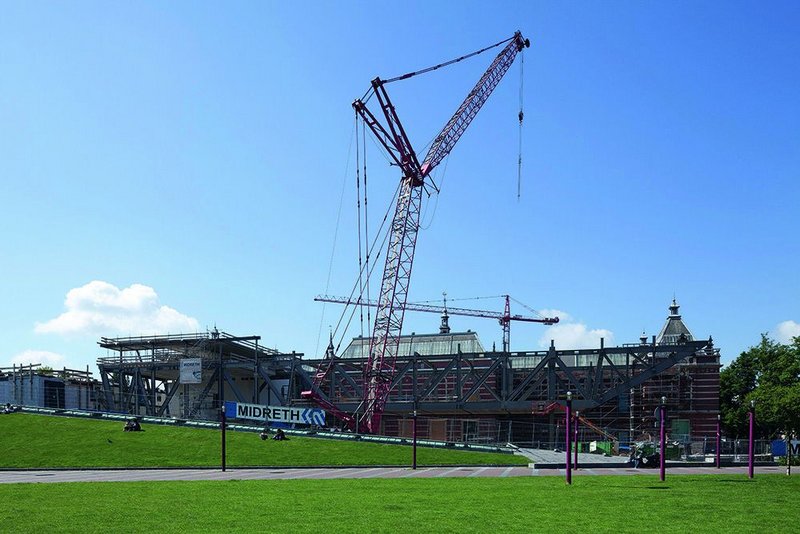 The 65m span of the huge steel bridge structure sits on only four columns.

Partner Mels Crouwel makes no bones about the fact that the dramatic bathtub form of the €75m extension, which doubles the size of the museum to 8000m2, was wholly down to Sandberg’s groundbreaking act of artistic vandalism – and in creating it, the architect had to resort to some pioneering thinking about the cladding to ensure the seamless aesthetics of its design proposal was achieved in the built reality. There was never any thought, even from the heritage lobby, that the wholesale renovation would take the original building back to its polychromatic state – its 1938 version was in everyone’s mind. Crouwel took this as a strong signal that any new building could externalise the inner radicalism of the ornate brick façade. The extension, which only kisses the original building at two points, creates some galleries below ground and lifts the rest 8m into the air to connect with existing gallery spaces. This releases a ground floor lobby that takes up half the area it was intended to occupy, and which appears to allow the Museum Square to flow inside the building. 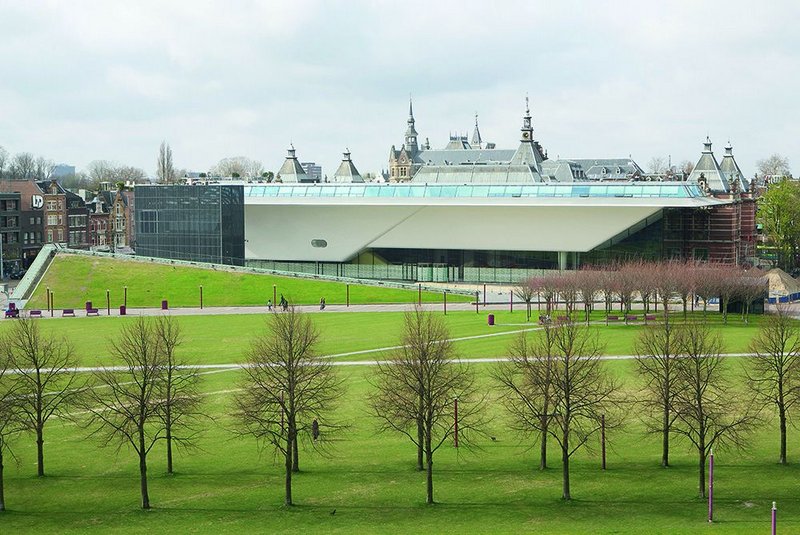 The finished facade, showing the elevation stepping to deal with solar orientation.

The steel structure, at over 100m long, runs the length of the original building’s south facade, with its 65m free span, engineered by Arup, effectively a bridge structure that allows the whole building to transfer loads down on only four columns. Bentham Crouwel was keen to develop a seamless aesthetic to clad its bathtub design, looking at a number of materials. Crouwel initially investigated aircraft and boat fabrication, at one point visiting Future Systems’ Lord’s Cricket Ground Stand in London, but noted that close-up, aluminium panels are riddled with surface inconsistencies. He was also aware that the only way it could construct the facade would be by forming it from a multitude of smaller panels, which would need joints to allow for thermal expansion. Since this opposed the seamless look the architect wanted, it approached Dutch engineer Solico, which has extensive experience in the use of strong, lightweight materials for the construction and defence industries. Solico recommended creating the facade from a composite formed of Teijin Twaron Aramid fibre and Tenax carbon fibres, which together display interesting properties. Whereas the fibres contract on exposure to heat, the resin matrix in which they are held expands. The net result is that the overall coefficient of thermal expansion is almost zero, even in the stated -25 to +35 temperature range, obviating the need for any expansion joints at all.

Manufacturer Holland Composites was contracted to produce a prototype that would meet Solico’s design criteria of a super flat, super smooth finish. Rigidity was needed to ensure the material didn’t buckle or warp in windy weather, as on such a large high-gloss surface any distortion would be immediately visible. The 185 composite panels for the museum’s facade were made of two layers of Twaron/ Tenax fibre bonded around 70mm of high performance PIR insulation. The size of individual panels was set by what could be legally transported by road the 70km from factory to site.

The huge tapering 12m roof soffit, clad in the same Twaron composite that cantilevers over the Museum Square, Crouwel explains, is more than just aesthetic. It was designed to cut out solar gain to the south facing main entrance lobby at the hottest times of the year, as well as to provide shelter from the rain for the public during the most inclement. To the east and west the facade was modified to take on board internal climate concerns – the section steps down to the west with low levels of glazing to cut out penetrating afternoon light while to the east it steps up, fully glazed and open to the views and cooler sunlight.

The white-clad bath tub form is in fact the inverse of Sandberg’s original notion. Whereas he hid a modern form within the traditional, Bentham Crouwel has continued the traditional form within the modern. Internally, the new upper level galleries are indistinguishable from those Sandberg created, despite the radical external expression. Even the 13m long escalator that connects the upper and basement galleries is encased in a white ‘sleeve’ that bypasses the ground floor and reinforces the sense of homogeneity of old and new spaces, without needing to perceive the ‘newness’ itself.

This one move throws up questions that go to the core of its architecture, based on the historical and cultural suppositions that the design is seen from. If the building is supposed to perform to a ‘traditional’ modernist reading, it should define itself as functionally and formally distinct in every respect from the 19th century Weissman building. Yet Crouwel has no aesthetic difficulty with the internal blurring of the boundaries of old and new, or indeed with the assumed neutrality of the colour. ‘I was almost raised in this museum. There is no question that white remains the right colour in which to view contemporary art,’ he says emphatically. His is an alternative view. In embodying Sandberg’s original spirit the extension becomes a metaphor – an inversion and externalisation of the curator’s modernist intent. Crouwel’s building in its smoothness and seamlessness is but a ‘lost wax casting’ of the existing building’s interior. Flipped, inverted, extrapolated – an Amsterdam whiteout. 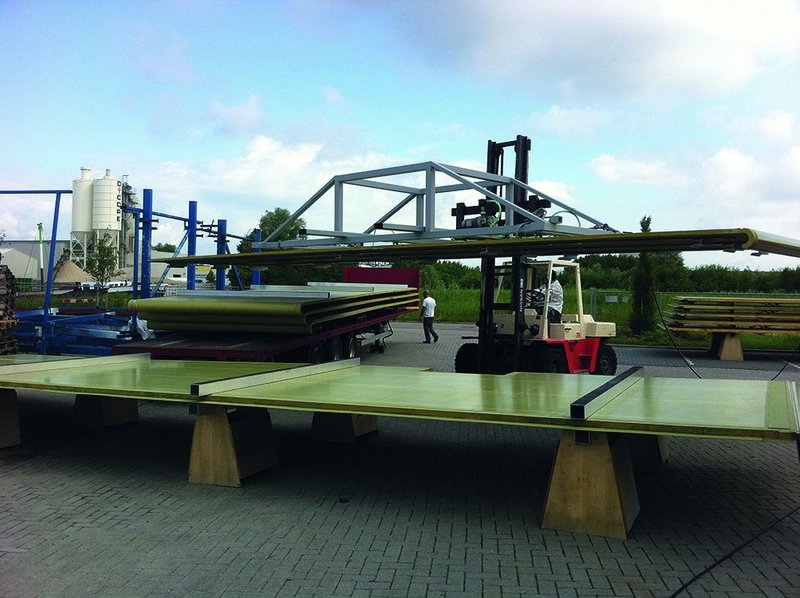 1. Delivering the huge composite panels to site involved convoys of trucks arriving at the site before 6.30am – a logistical feat that took over six weeks to achieve. The site had been completely isolated from the environment around it – sealed with plastic, heated and even with air extractors installed to ensure that it was virtually dust-free. These conditions were necessary to ensure that no dust or rain settled on the panels once they had been positioned and were ready to be bonded and sanded together, and finished with the final layer of high gloss paint. 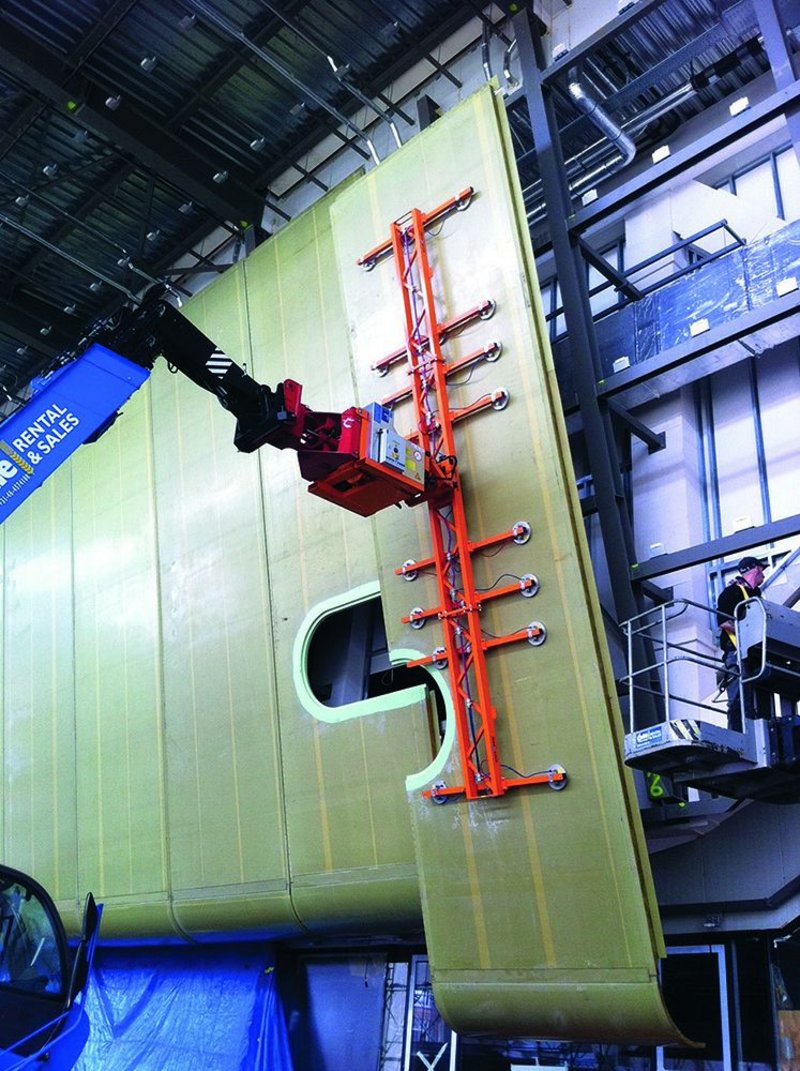 2. Mounting the panels was a precision exercise. Each had to be laid absolutely flat so no distortions would be evident in the completed surface of the 100m long and 25m wide façade. The 185 panels required nearly 1800 mounting points fixed to the steel structure, necessitating a +/-3mm tolerance on the main structure. However, a greater level of accuracy was required to ensure that panels were not fixed distorted. A surveyor using laser measurement ascertained the accuracy of the position of each mounting point. 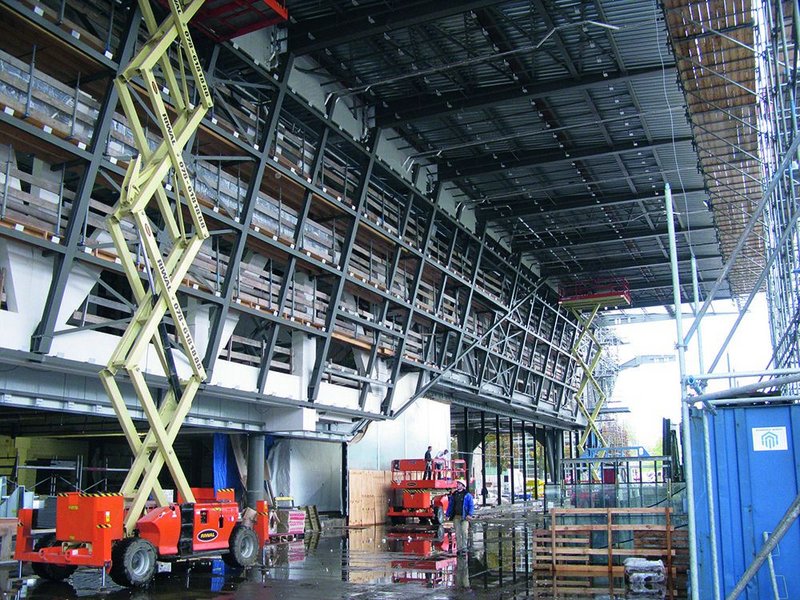 3. Holland Composites, which was fixing the panels, designed a set of six plastic caps that could fit over each mounting point on the steel structure. These could shift the position of the panel relative to the mounting point by up to 3mm each way. Once inaccuracies were noted, workers scaled the structure to adjust the caps. To protect panel surfaces during lifting, cherry pickers were fitted with rubber sucker vacuum clamps. Each panel was fixed to the structure with up to 15 hooks, which had to be placed over the plastic mounting points simultaneously. A remote device positioned panels exactly before they were lowered into place. 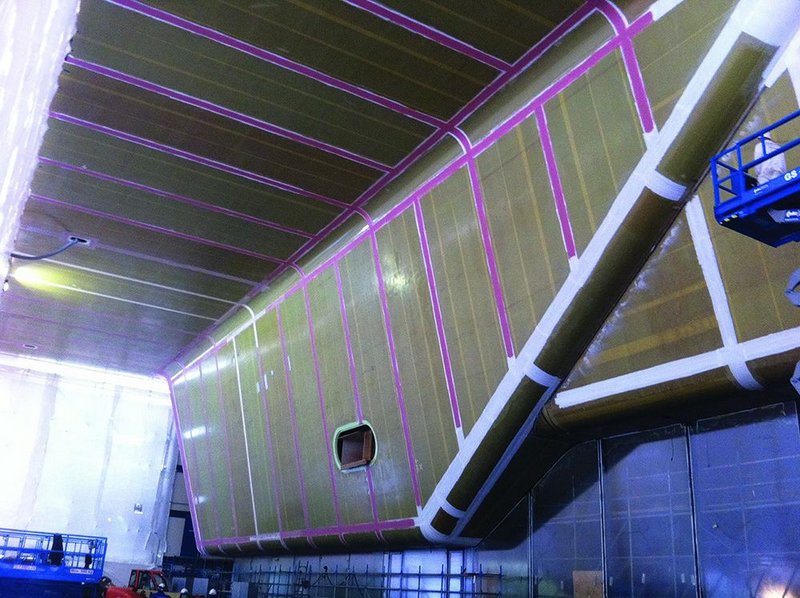 4. After mounting, adjacent panels needed to be bonded together to create one single surface. Panels were designed so that there was a 5cm gap between the Twaron reinforced outer skins of each. A strip of aramid reinforced laminate was then run along this gap and bonded directly to the PIR foam beneath. This effectively bridged the panels and made the cladding behave as a single unit. At this point the facade is virtually homogeneous. 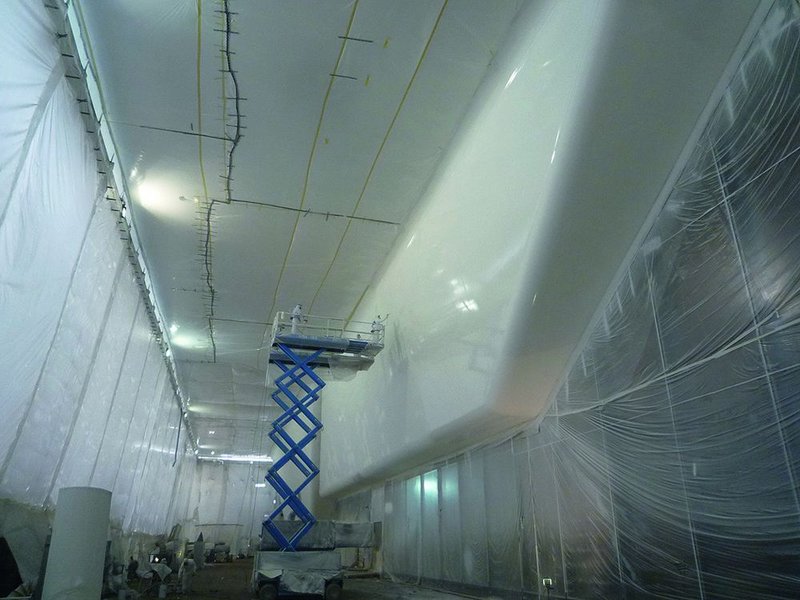 5. To create the semblance of a single seamless surface, the whole facade had to be painted in one go. This involved a four-phase painting method. At one end of the facade paint sprayers were installed at three levels – one above the other – raising them off the ground on moveable aerial platforms. These ‘platforms on wheels’ were then carefully driven along in synch with each other, with their onboard sprayers coating the facade as they went, creating in their wake a smooth, seamless and glossy
white surface.

Teijin Twaron Type 2200, 8050 dtex
> Twaron has unique properties. It is five times stronger than steel, has large dimensional stability, no melting point, low flammability, is not conductive and is sustainable.
> Type 2200 is a high modulus aramid fibre, which means the fibre has an optimum level of rigidity, the lowest possible elasticity at a specific force.
> The quantity of Twaron used in the facade of the Stedelijk Museum is 4850kg – the same as approximately 6000km of fibre.
> Twaron is normally used to fortify bridges and concrete pillars in seismic areas, yachts, car tyres, heat resistant products and bulletproof vests.

Teijin Tenax Carbon Fibre Type STS 40 24k
> Tenax is a standard type of carbon fibre suitable for composite applications in such areas as the car and aircraft industries.
> 24k means the fibre consists of 24,000 filaments – the number of threads per bundle in the fibre. The more threads, the stronger the material. 24k is extremely strong.
>The quantity of Tenax used in the fibre for the Stedelijk Museum is 4050kg – approximately 2500km
of fibre.